March 26, 2015 – In an effort to promote the studio’s latest release in the popular Fast and Furious franchise, Universal Studios Hollywood will be hosting a series of special promotions and events centered on the premier of Furious 7.

In line with its movie-studio heritage, Universal will be hosting advance screenings of Furious 7 at AMC Universal CityWalk 19 during select times every seven minutes after the hour starting on April 2, 2015. In addition, AMC Universal CityWalk 19 will also host a two-day movie marathon featuring six of the Fast and Furious releases from March 31, 2015 to April 2, 2015 culminating in a viewing of the highly anticipated hit Furious 7. Fans that are interested in the screening may purchase tickets on CityWalk Hollywood’s official website.

In addition to the theater promotions, Universal is also displaying a wide array of props from Furious 7 – including the 1967 Camaro located in front of the AMC Theater alongside wardrobes worn by Vin Diesel and Luke Dwayne Johnson. Guests can also take a photo with a wax figure of Vin Diesel alongside a 1970 Plymouth Roadrunner and a 1970 Dogger Charger within Universal Plaza inside the theme park.

For more information, we’ve included the entirety of Universal’s press release below alongside some photos of Universal’s Fast and Furious promotions. 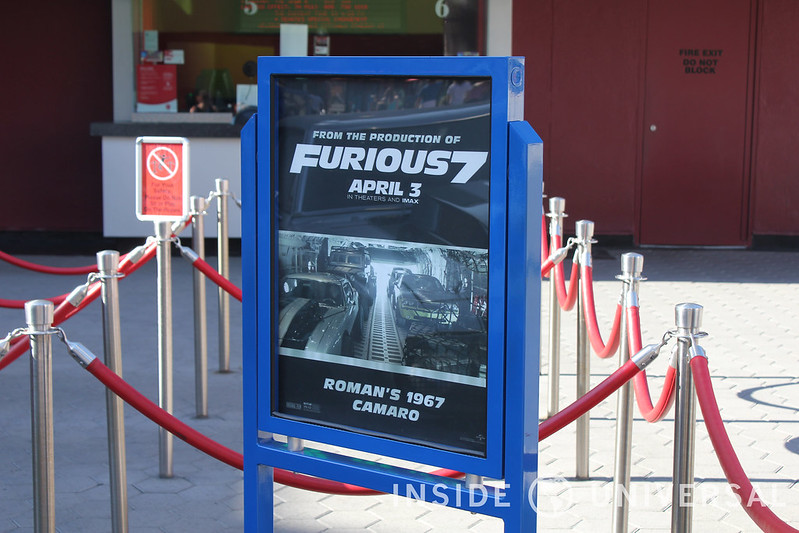 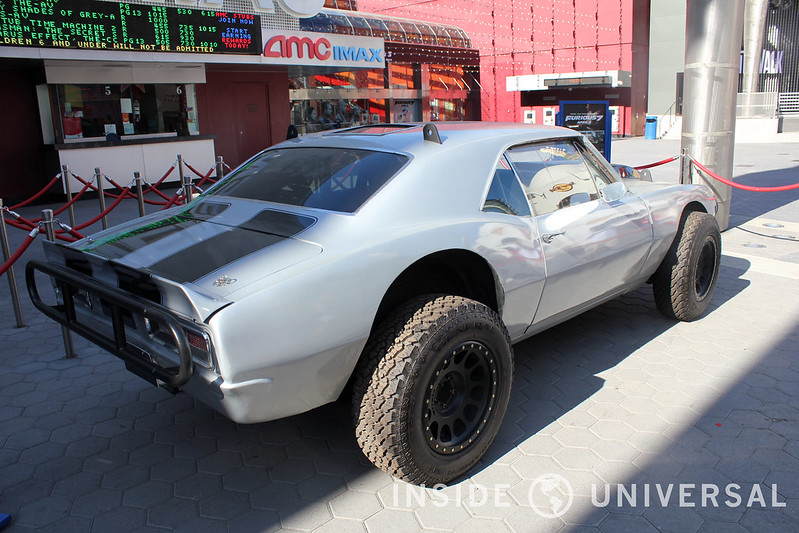 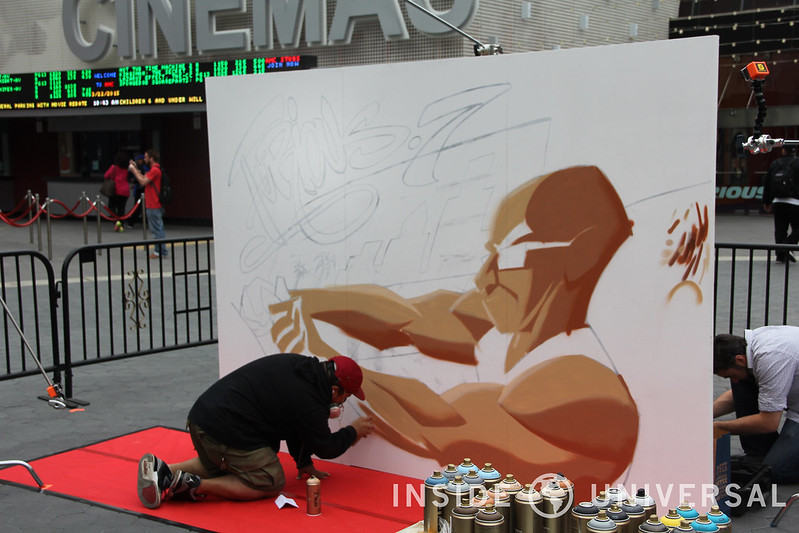 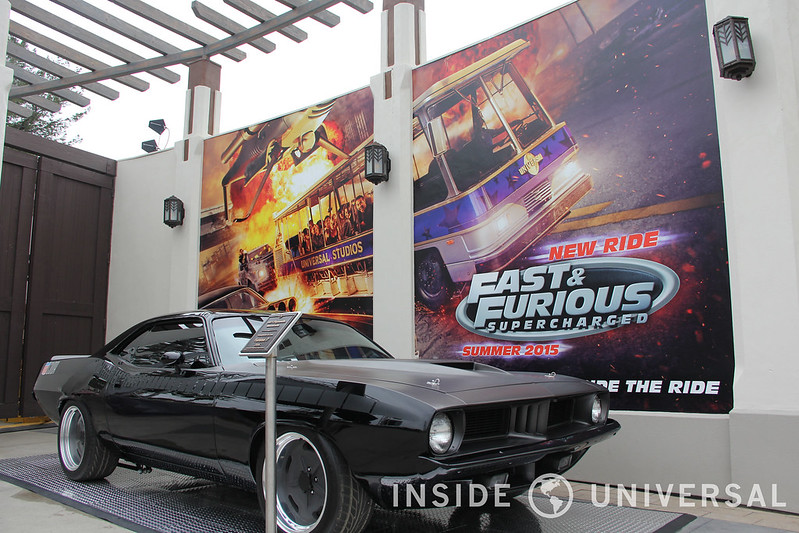 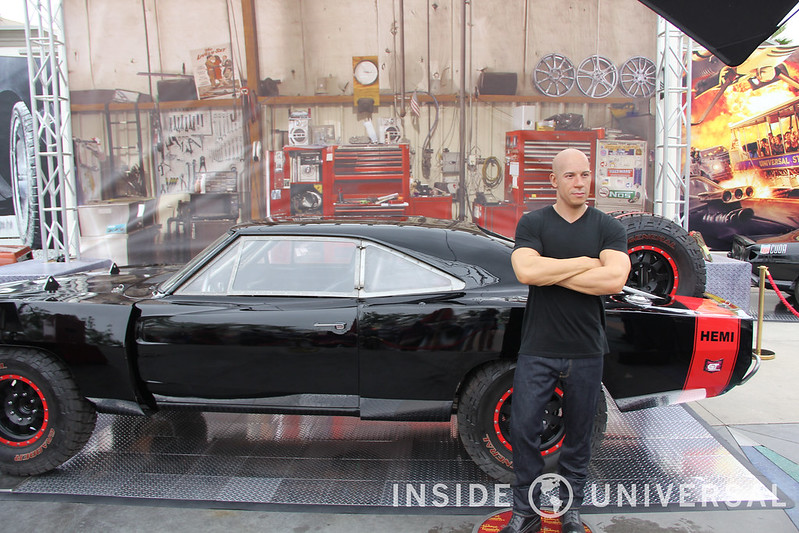 Universal City, California – March 25, 2015 – Universal CityWalk revs up for a turbo-charged takeover with Universal Pictures’ Furious 7, featuring a flurry of activity in support of the film’s April 3 release, including a Fast & Furious movie marathon at the AMC Theatres, an exclusive first-look at Furious 7’s 1967 Camaro and an original costume display, including attire worn by Vin Diesel and Dwayne Johnson in the new action thriller.

As the choice L.A. destination to see the latest installment in the Fast & Furious film series, Universal CityWalk’s AMC Theatres will jump-start the excitement with advance screenings of Furious 7 starting at select times every seven minutes after the hour beginning on Thursday, April 2. The AMC Theatres will also bridge the gap to this latest film with an exciting two-day movie marathon at CityWalk, featuring all previous six Fast & Furious films on Tuesday, March 31 and Thursday, April 2.

For more information and to purchase tickets to the advance screening of Furious 7 and the Fast & Furious movie marathon at the AMC Universal CityWalk Theatres and IMAX, visit www.CityWalkHollywood.com.

The exciting Furious 7 takeover also provides guests with an exclusive opportunity to get up close and personal with genuine artifacts from the new movie, including the 1967 Camaro that character Roman Pearce (Tyrese Gibson) drives. Located on CityWalk, outside the AMC Theatre, the grey muscle car—with its 500 horsepower and 4×4 tires—offers fans a picture perfect photo opp through Sunday, April 5.

Authentic wardrobe worn by Dominic “Dom” Toretto (Vin Diesel) and Luke Hobbs (Dwayne Johnson) will also be on display exclusively at the AMC Theatres from Friday, March 20 through Friday, April 10.

The non-stop action and charged atmosphere shift into high gear as CityWalk’s state of the art outdoor concert venue, “5 Towers,” celebrates the Furious 7 takeover with a D.J. party spinning songs from the film series’ entire music library, including new sounds from the latest movie soundtrack as part of the opening weekend festivities from Thursday, April 2 through Saturday, April 4.

Universal Studios Hollywood will join in on the takeover as the theme park prepares to introduce its all-original thrill ride “Fast & Furious—Supercharged” on Thursday, June 25.

“Fast & Furious—Supercharged” is a technologically advanced, epic ride that reunites stars from the Fast & Furious series in a groundbreaking mega-attraction, conceived as a new installment to the dynamic Fast & Furious films that can only be experienced at The Entertainment Capital of L.A. Featuring characters made famous by Vin Diesel, Dwayne Johnson, Michelle Rodriguez, Tyrese Gibson and Luke Evans, “Fast & Furious—Supercharged” will catapult guests into the high-stakes underground world of fast cars in a harrowing escapade—at perceived speeds in excess of 120 miles per hour—to save one of their own from an international crime cartel.

For a behind-the-scenes look at “Fast & Furious—Supercharged,” please click here. The 90-second footage offers insightful perspective on the making of this adrenaline-charged attraction along with interviews with Fast & Furious franchise cast members and stars of the ride, including Dwayne Johnson, Michelle Rodriguez and Tyrese Gibson.