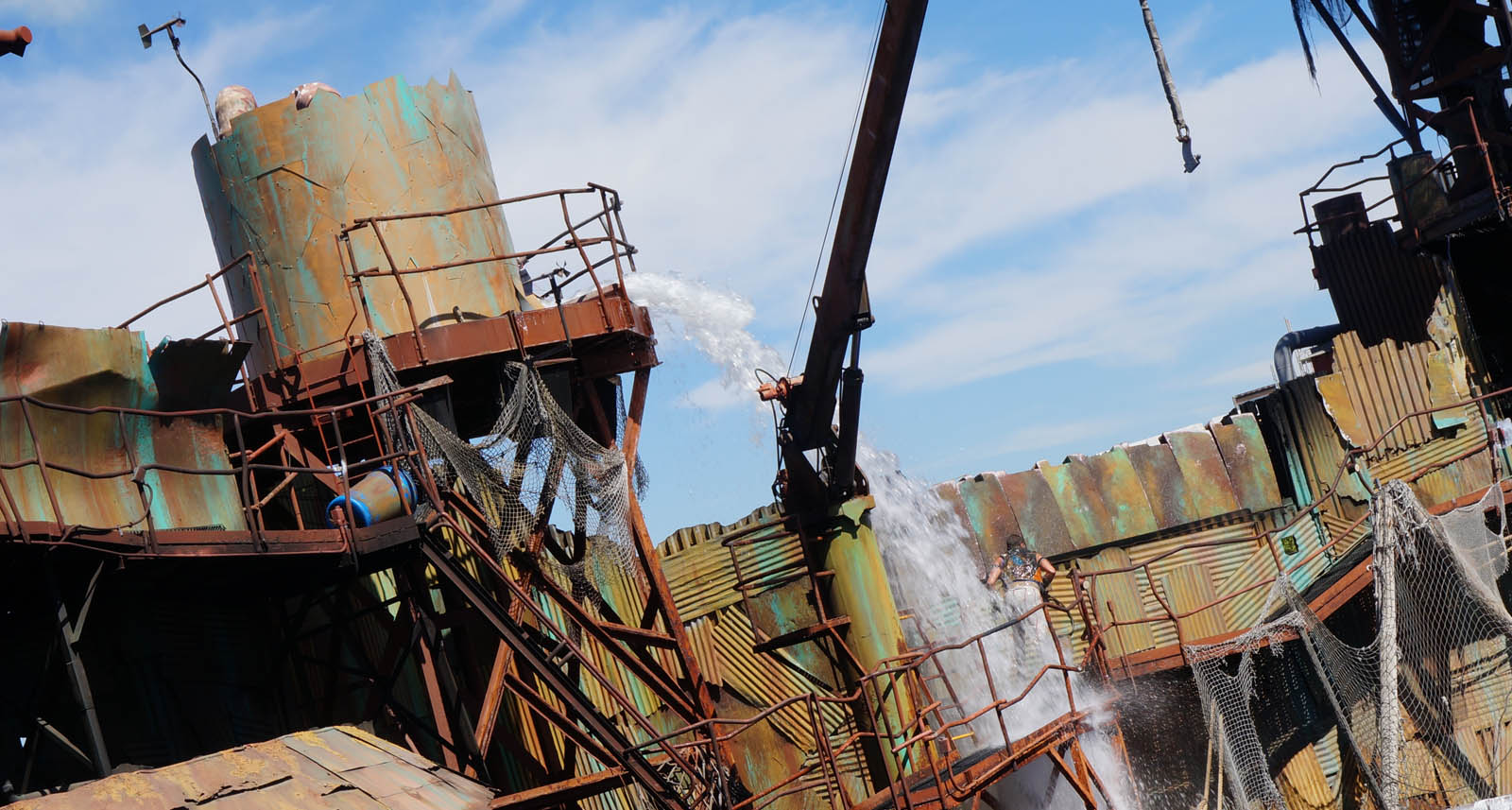 The best theme park show in the world!

WaterWorld takes you on a whirlwind adventure as you watch Helen and the Mariner flee from the evil Smokers in hopes of finding dry land in a future where the polar caps have melted, and land is deep beneath the ocean waters. The remaining survivors live on floating metal structures, periodically sending out explorers in hopes of finding inhabitable dry land.

Unfortunately, no explorer has ever returned…until now. The problem? She doesn’t come back alone.

While may reference WaterWorld the film as a failed blockbuster, WaterWorld – the show – is actually pretty good. Read on to find out why.

Yes, ask for assistance. Seating is located throughout the arena, but be mindful of soak zones (see the seating chart graphic below for more information).

Permitted, but be aware of water effects.

Parents should exercise caution. WaterWorld contains loud explosions, gunshots, water effects, fire, and action. While most children appear to do fine with the show, especially young children may be sensitive to the loud nature of WaterWorld.

The Express entrance can be found underneath the main WaterWorld arch. Simply show your pass to a team member and you’ll be directed to a separate queue with priority access.

Stroller parking is located inside the theater, around the outer perimeter of the theater as you walk in.

WaterWorld contains loud noises, pyrotechnics, fire effects, explosions, gunfire and intense action sequences. While one would think children would have an issue with these elements, most children actually seem to do fine in practice. If there is one caveat, it’s very young children that usually take issue with the show’s loud explosions or gunfight sequences.

WaterWorld’s seating is divided into three distinct sections. By far, the left section (with soak zones marked in green in the graphic above) is the wettest side during the show, while the center offers the most balanced mix of wet and dry. In contrast, the right section is probably the driest and hottest section of the three. But be aware that all three sections offer an opportunity to get wet if you’re positioned near the front of the stage.

Shows like WaterWorld have a fixed number of performances per day. As such, you should prioritize shows over rides and other continuously running attractions if you’re running short on time. Arrive 15-20 minutes before posted show times. Remember, posted show times are when the show actually starts, not a recommendation as to when you should start lining up. The first and last performances of the day are the least crowded and generally allow you to select the best seats in the house.

Best seat in the house?

WaterWorld offers three main seating sections. For many, the center-middle section will give you the most balanced perspective of the entire seat. For those who wish to get incredibly wet, the left section near the front of the stage are the wettest seats in the house.

If you don’t want to get wet – do not arrive late. The show’s performers will actively squirt and throw water at you if you arrive near the start of the show. This playfulness is not just to engage with the crowd, but it also encourages people to hurry to their seats so that the show can start on time.

For your safety, remain seated!

Please remain seated during the entire show. If you must exit, please do so as quickly by walking behind the bleachers and away from the main pathways (the actors use these pathways during the show). Team members will be readily available to assist you in leaving the arena.

On many days, most of if not all of the actors will step out near the exit of the arena at the end of the show near the giant shark to take pictures. Many guests walk out of the arena without knowing this and miss the opportunity to take a photo opportunity with the show’s performers.

Our Take: From our Editors

Without a doubt, this is probably my favorite theme park show currently in production. It’s relatively short, action-packed and best of all: it has a coherent plot. What’s not to love?

But on a more serious note, WaterWorld stands as one of the longest-running shows on Universal’s roster. That either speaks volumes about the kind of production they’re running or the lack of motivation to update the area with something better (though I’m willing to bet money on the former since Universal did indeed update the show with a new production in 2014). But whatever the reason, WaterWorld is probably the best show Universal has to offer worldwide. 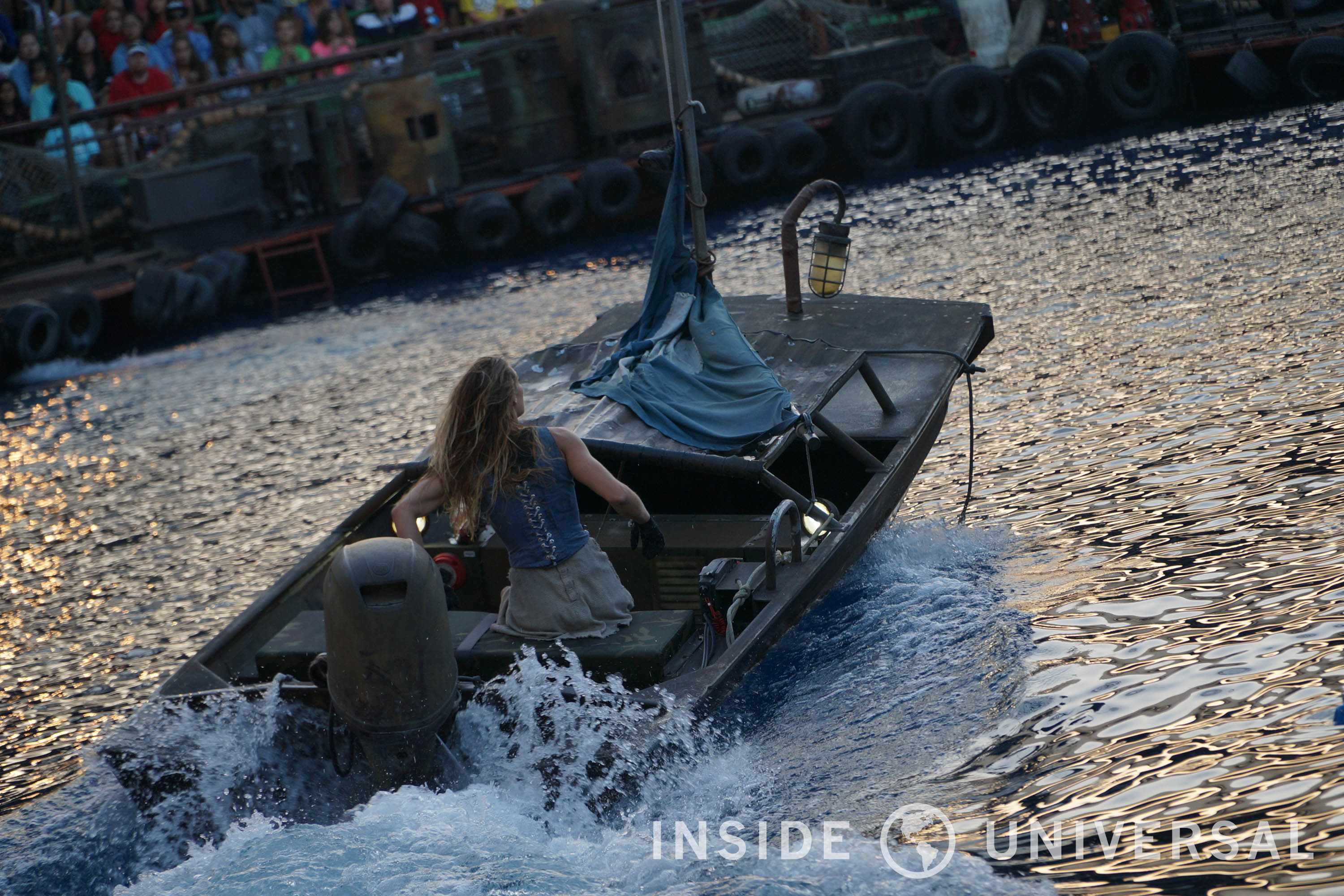 But enough about the set, how’s the show? Pretty good, actually. Neglecting the fact that some of the show’s dialogue is downright campy (which the live-mic actors readily poke fun at), the plot itself is relatively short and to the point, making it easily digestible in a theme park show. Best of all, the show is packed with thrills. Simply put, you’re not going to get a theme park stunt show that has the level of pyrotechnics and stunts WaterWorld has to offer on a daily basis. High water dives, massive fire explosions, great actor-audience participation and awesome water effects really make this show stand out amongst the crowd. Not only that, but WaterWorld and its performers also have a few tricks up their sleeves to surprise even the most traveled theme park goers.

WaterWorld is such a nice production that I’m willing to classify this show as one of Universal’s flagship attractions.

To sum things up: it’s a show you really shouldn’t miss.