June 18, 2015 – Since Universal Studios Hollywood made the announcement in April of last year, fans of the Fast and the Furious franchise have been anxiously awaiting the arrival of “Fast & Furious – Supercharged.” From the demolishing of the “Curse of the Mummy’s Tomb” tram attraction in 2013 to the construction of “Fast & Furious – Supercharged,” the editors at Inside Universal have been diligently keeping an eye out for any visible changes or updates. However, Universal has been especially secretive with this project, making it particularly difficult to see what was going on. With the official opening just around the corner on June 24, we were lucky enough to be invited for a special sneak peek at what to expect. Here’s a look at what we experienced that day.

The Studio Tour began like any other tour. We were instructed to grab our 3D glasses (the same ones used for King Kong 360-3D), and we found our seats on the tram. The Studio Tour guide treated this as a normal tour, with the regular tricks and jokes. Something odd we noticed was that the tour guide never directly mentioned the brand new finale for the Studio Tour that we were about to experience. It wasn’t until we passed Colonial Street that it all started to make sense. 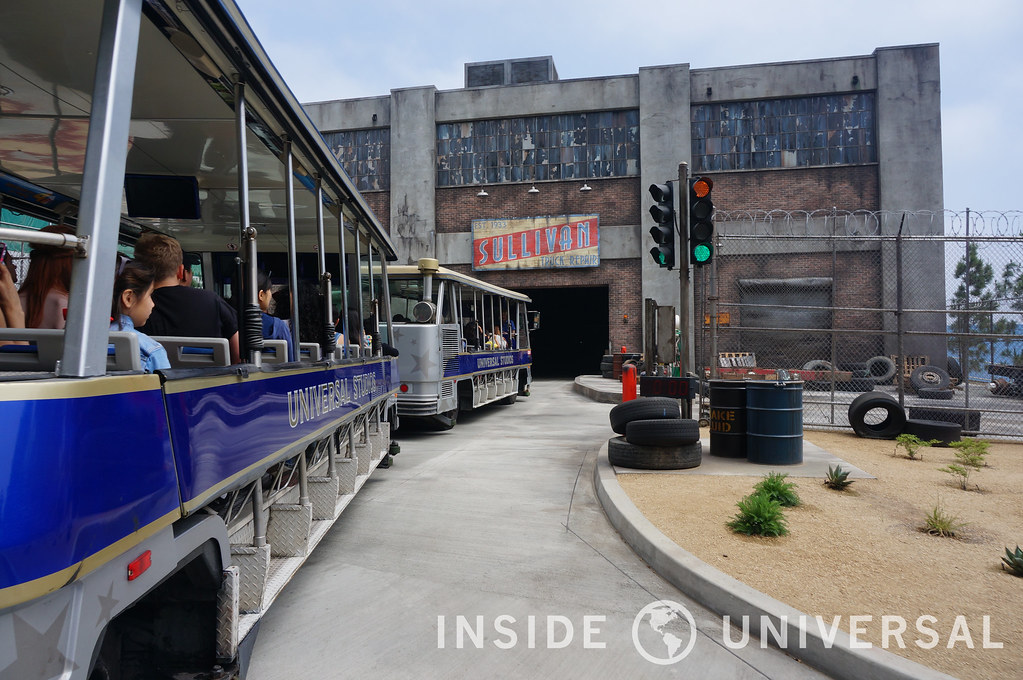 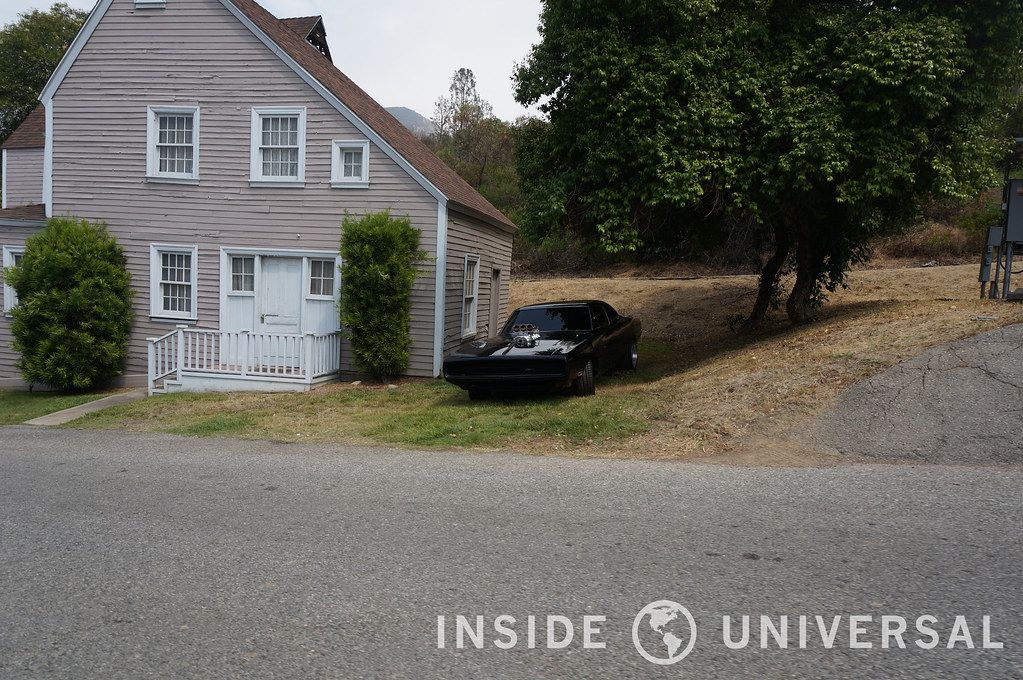 The tour went on like normal until our tour guide noticed a black Dodge Charger parked next to Colonial Street. He explained to us that they take security very seriously here at Universal Studios Hollywood and this sort of thing needed to be reported immediately. So, our tram stopped and he made a video call to the security department that we were able to watch on the video screens. It came to our attention that this car belonged to Dominic “Dom” Torretto (Vin Diesel), elite street racer and ex-convict. Since security had been notified, we were assured that the situation would be taken care of and we went on our way. It wasn’t until we made it past the Psycho sets that we were interrupted again.

“The tour guide never directly mentioned the brand new finale for the Studio Tour that we were about to experience. It wasn’t until we passed Colonial Street that it all started to make sense.”

Another video message came through from the security personnel who introduced us to a member of the FBI. The FBI agent gave a briefing that warned us about Dom Torretto. As we went past the War of the Worlds sets and approached the ride, the video message was interrupted by Luke Hobbs (Dwayne Johnson) who announced that he was taking over.

At this point, we have arrived at an old, abandoned garage. The outdoor set was very well done. Surrounding the front of this very large building are rusty old cars and car parts, various tires, and an old gas pump. The landscaping gives the impression of a desert town with no one around. The building’s façade shows dirty, possibly broken windows, concrete pillars and brick walls that have seen better days, and a sign that says “Sullivan Truck Repair” that looks like it hasn’t been updated in years. Overall, this outdoor set was very impressive. 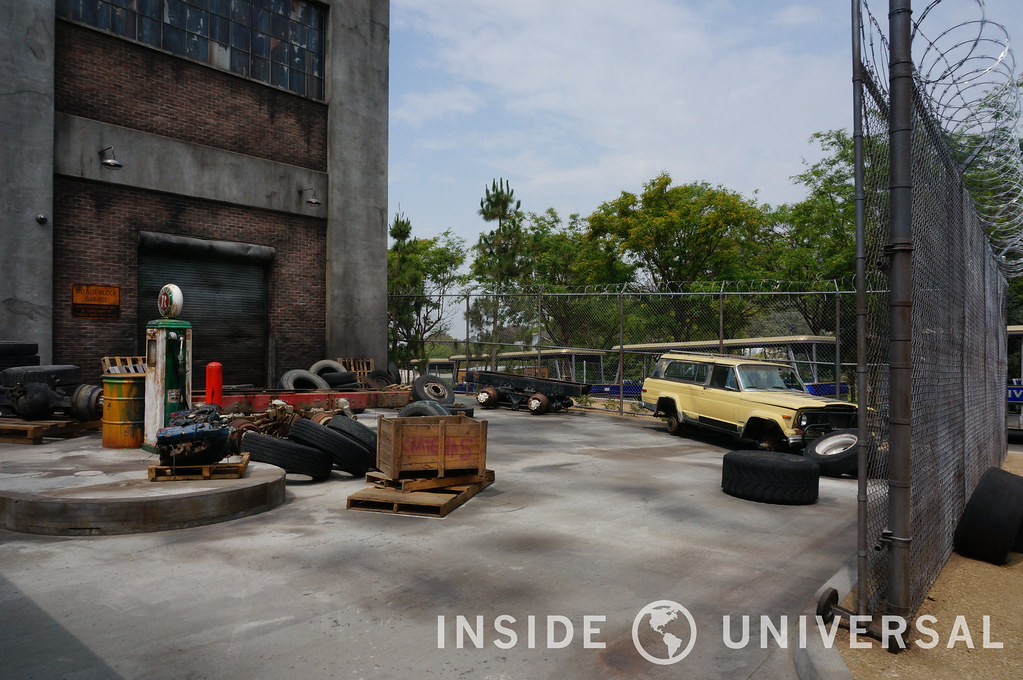 From here, our tram entered the garage through the center door. The indoor sets were equal to the outdoor sets in terms of how well they were decorated. With tool boxes and bulletin boards and various mechanic tools, the overall atmosphere matched any other mechanic’s garage. Again, we were impressed by the surrounding physical environment. In the garage we were met by Roman Pearce (Tyrese Gibson) and Letty Ortiz (Michelle Rodriguez) on the video screens. It is revealed that someone on the tram was a witness to one of Owen Shaw’s (Luke Evans) crimes and Dom and his family were recruited to protect this witness.

This is when we hit our first snag in the ride. At this point, we were supposed to enter the next room. The tram stayed still, there was some awkward silence, and then the lights came on in the building, another Fast & Furious video played, and we drove through the building without seeing the rest of the ride. As the video continued to play, the tram exited the building turned around and we tried again. It is unclear how often technical difficulties like this one have been occurring, however it does raise concern considering the opening day is only a little over a week away. It is important to recognize the complexity of this ride. With many different special effects coming into play, hiccups like this are to be expected. We are curious to see if these problems will be fixed by the time it opens to the public.

“It is unclear how often technical difficulties like this one have been occurring, however it does raise concern considering the opening day is only a little over a week away.” 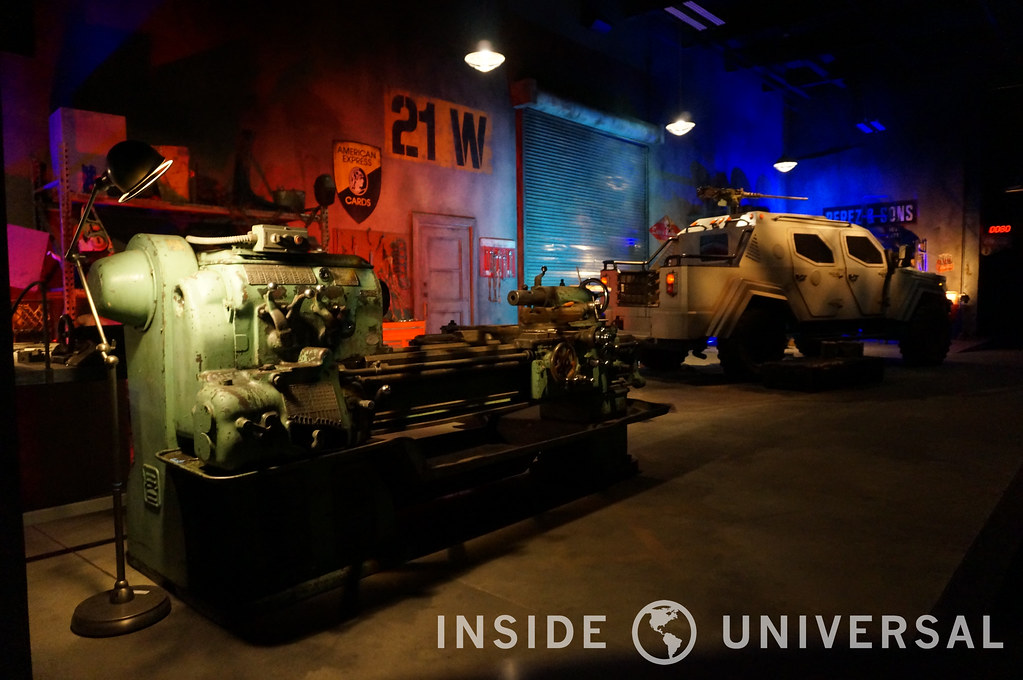 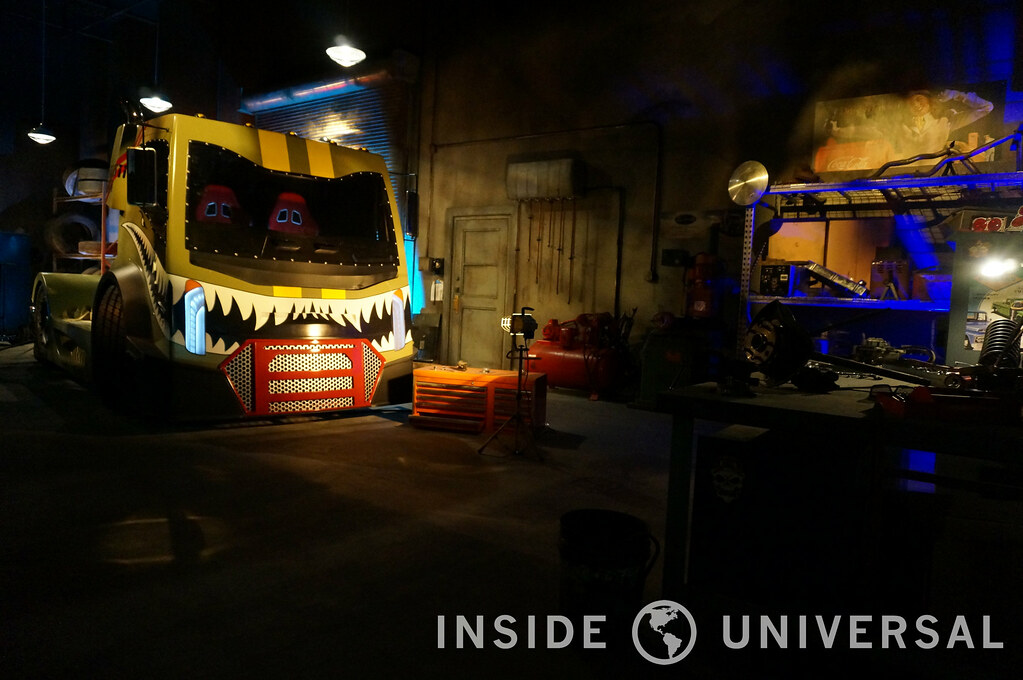 On our second go around, we had no issues. From the garage, we entered into a party scene using a visual trick called “Pepper’s Ghost.” For guests who have ridden the Haunted Mansion at Disneyland, you’ll recognize this trick from the ballroom scene with the dancing ghosts. This special effect gave the appearance that there were actual people in this scene rather than just video projection. While the story seemed somewhat of a stretch at this point, and the content seemed a bit inappropriate for a family park, this part of the ride was the most impressive. Universal Creative did a great job utilizing both practical and special effects for this scene. Another aspect we appreciated here was that each car had its own view of the scene. Curtains were brought down between each car so that the scene we were watching was focused on our car rather than one big room with the scene in the middle. This small aspect of the ride was both unexpected and appreciated.

Before we go into the final scene, we wanted to expand on what we meant by “inappropriate.” This is a typical party scene that you would see in most PG-13 movies. Girls were scantily dressed and Tyreese Gibson’s character was toting multiple girls as he entered the scene. It is well known that the Fast and the Furious franchise is not a G rated experience, however it was surprising to see that this aspect was carried over into this family-centered park, especially in the most popular ride at Universal Studios. This scene could easily be too inappropriate for young children and it is virtually unavoidable for families unless they completely omit the Studio Tour from their day. Personally, I am curious to see if this will be an issue once it opens to the public.

“It is well known that the Fast and the Furious franchise is not a G rated experience, however it was surprising to see that this aspect was carried over into this family-centered park, especially in the most popular ride at Universal Studios.” 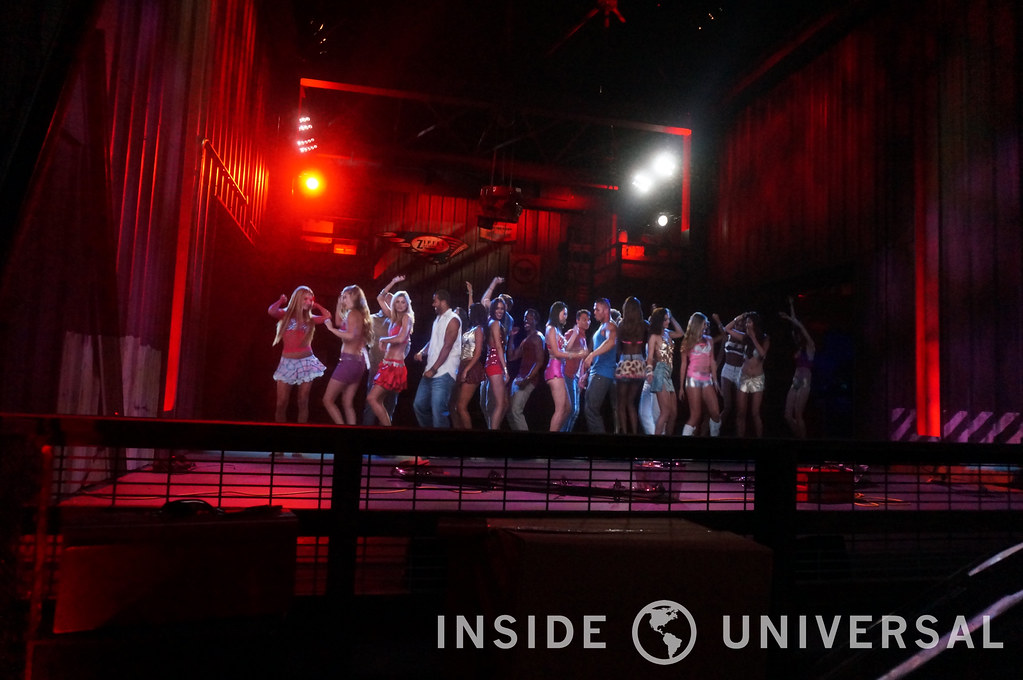 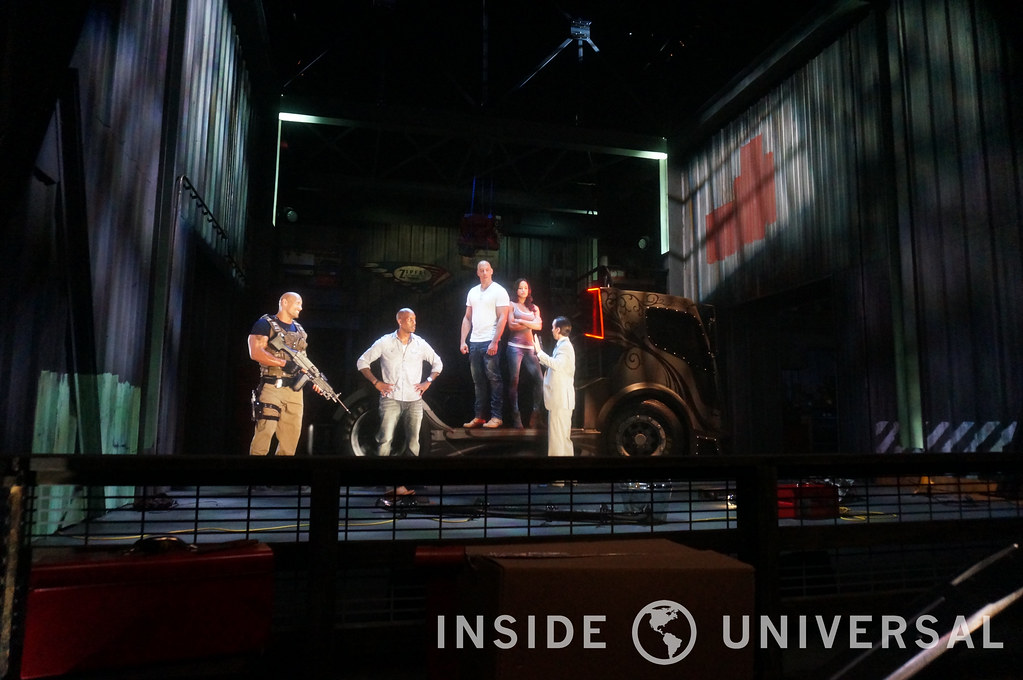 After the party scene, we were led into the final room where the actual “ride” part takes place. Unfortunately, this is where the magic was lost for us. The room itself was impressive. Designed much like the King Kong 360 3-D attraction, this room utilized a 400 foot long 360-degree screen with 34, 4K projectors to create an overwhelming sense of realism. However, the animation eliminated any sense of reality here. It felt almost as if you were driving through a life-sized video game instead of the streets of Los Angeles. The thrill and adventure was definitely present in this scene with simulated speeds of over 120 miles per hour and explosions and gun fire all around you. With that said, it would have been a better experience if we weren’t sprayed with water every few seconds.

“However, the animation eliminated any sense of reality here. It felt almost as if you were driving through a life-sized video game instead of the streets of Los Angeles.”

For the most part, this was a very well put together ride. There were some definite downfalls to this attraction, but the time and effort put into this project was very evident. Be sure to check it out for yourself on June 24 when it opens to the public and let us know your thoughts!