July 7, 2015 – Over the weekend, guests at Universal Studios Hollywood were greeted with a new Jurassic Park-themed meet and greet, building on the tremendous success of Jurassic World, currently in theaters.

While the encounter recently debuted in Orlando in May of this year and Singapore many years back, it was finally time for Hollywood’s turn for their take at a Velociraptor meet and greet.

Currently the meet and greet takes place down in the Lower Lot, just outside of the splash zone from Jurassic Park The Ride. Running nearly the full span of the operating day, with short breaks inbetween, it was consistent at drawing crowds, thanks to a short show before the photo opportunity begins.

Coupled with the advertisements promoting going on the ride after watching Jurassic Park and small additions on the Nighttime Tour, this new meet and greet indicates a renewed effort at plussing up and bringing attention to the park’s Jurassic Park attractions. Given the fact the latest movie has broken numerous world records, it would be foolish to think this is the last of the dinosaur-themed offerings at the park, when guests have shown a renewed vigor towards dinos not seen in decades.

Below you will find video and pictures of the opening show of the encounter. Stay tuned to Inside Universal for all the latest paleontological park developments. 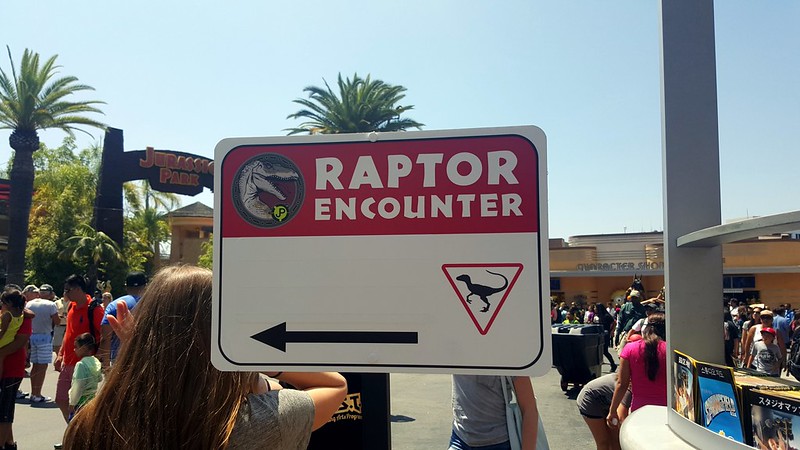 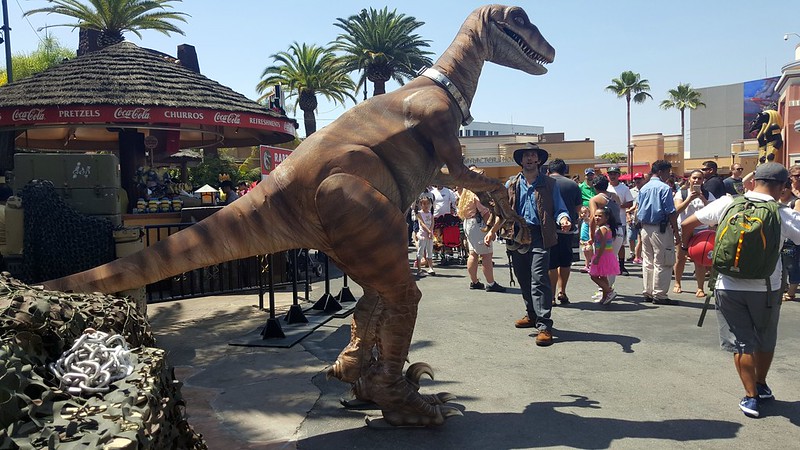 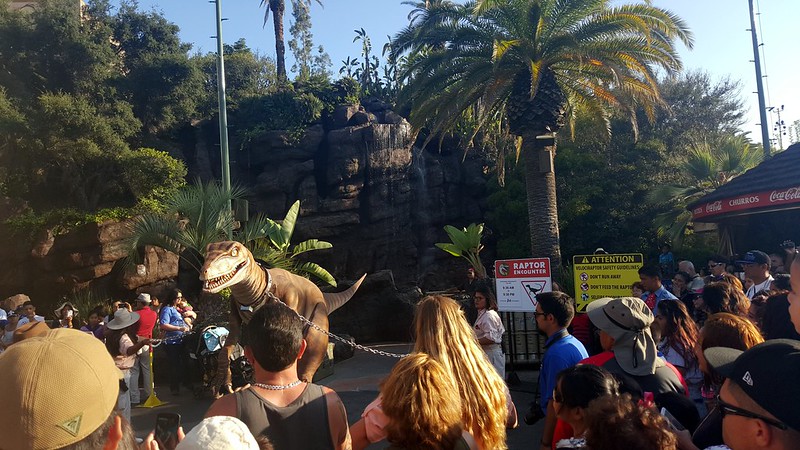 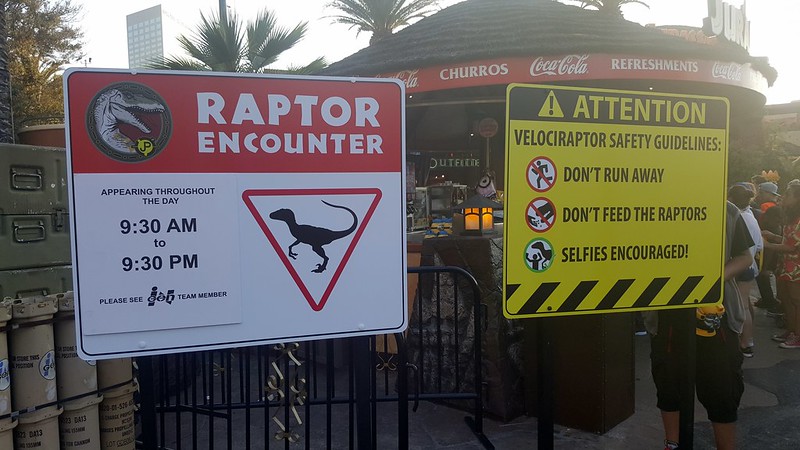 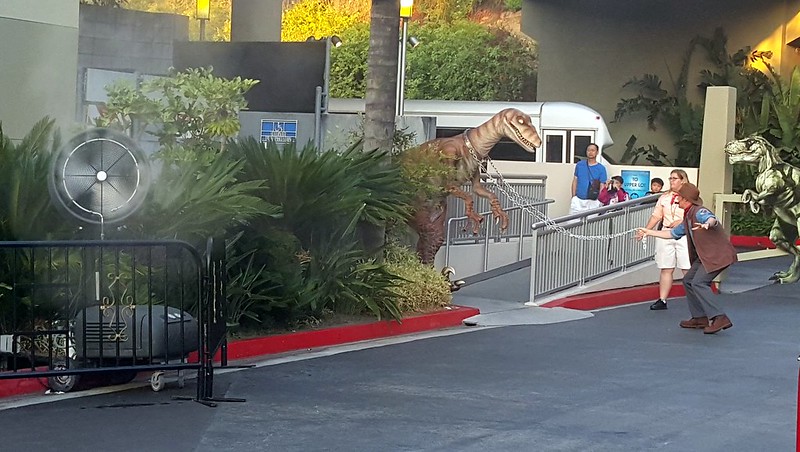 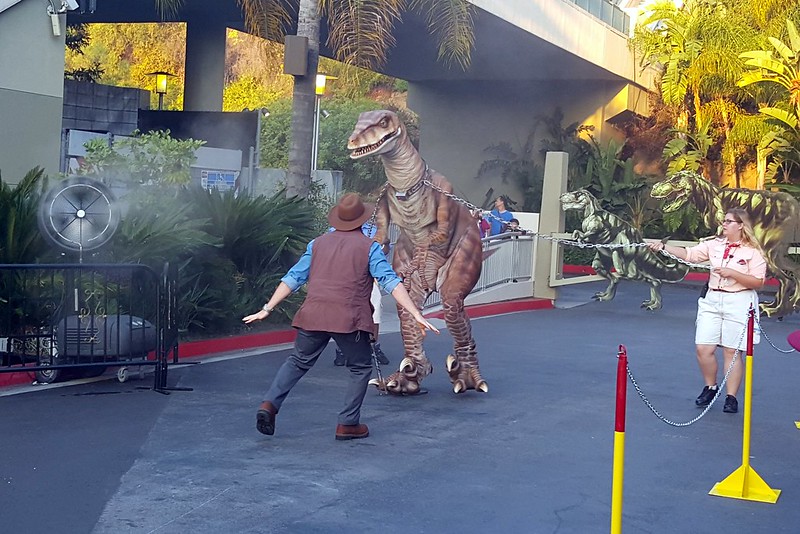 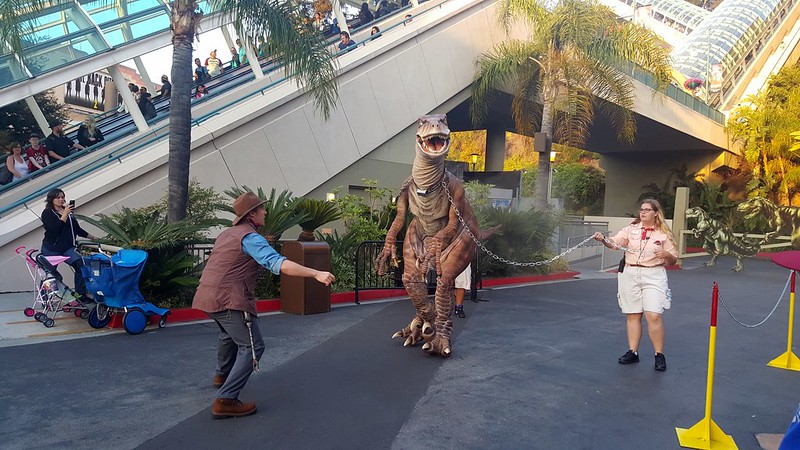 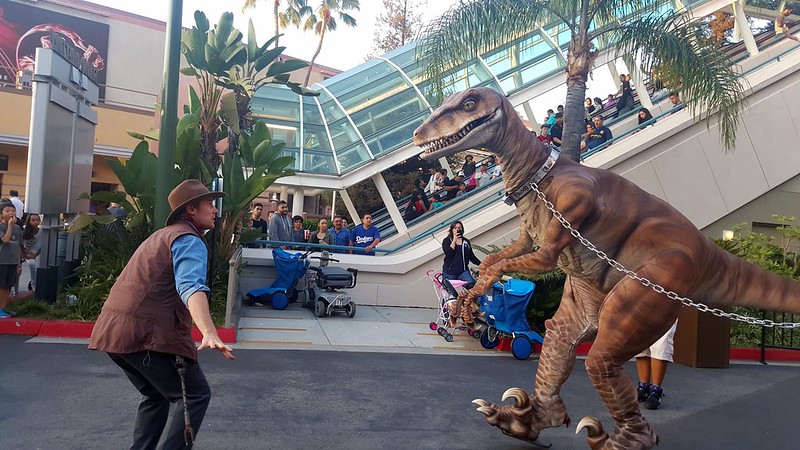 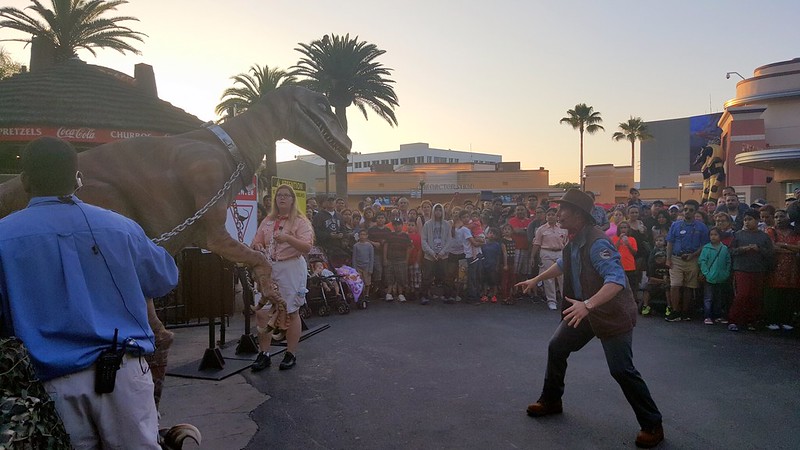 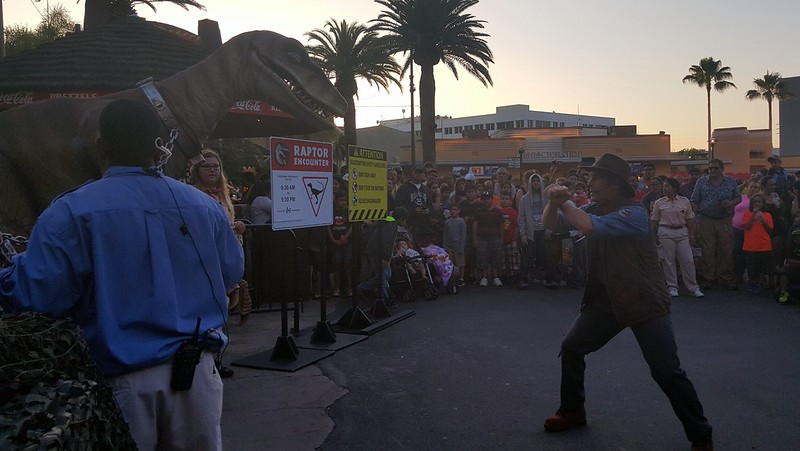 Universal City, CA, July 23, 2015 – The ferocious predatory Velociraptors that gained notoriety in the Jurassic Park blockbuster movies and sprang to life in “Jurassic Park—The Ride” at Universal Studios Hollywood will be unleashed in an all-new exciting “Raptors Encounter” experience at The Entertainment Capital of L.A. that pits guests in a daring face-to-face standoff with these terrifying, now free-roaming carnivores.

Tipping the scales at a hefty 750 pounds, towering 15 feet in height and 13 feet from tail to snout, the aggressive Cretaceous-era dinosaurs will each succumb to highly skilled handlers who adeptly guide them to within feet of guests in a specially themed area of the park, located adjacent to “Jurassic Park—The Ride.”

Each one of the Raptors displays intimidating eye contact and emits ear-piercing screeches to reinforce their predatory dominance. Their snouts alone measure nearly 20 inches and house 56 razor sharp, bone-crushing teeth. With curved talons measuring up to 12 inches on each of their 18 inch-long feet, Velociraptors are formidable hunters and theme park guests are advised to approach them with caution.

“Jurassic Park—The Ride” comes to life at Universal Studios Hollywood, inspired by famed director Steven Spielberg’s epic movie, where guests experience a wide array of living, breathing, prehistoric dinosaurs. A phenomenal interactive thrill ride, “Jurassic Park—the Ride” features a land where stormy skies are pierced by colossal, three-dimensional, five-story dinosaurs and a world where visitors discover that they have become prey for a terrifying T. rex. The adventure culminates with a breath-taking 84-foot drop down a treacherous waterfall.