August 18, 2015 – If you followed the site at all over the weekend on Twitter, you would have seen a flurry of posts about the Halloween Horror Nights panel revealing the newest maze for 2015, Halloween: Michael Myers Comes Home Maze. It stands to mention that ScareLA doesn’t exist solely as a means to promote HHN. There were plenty more events, shows, attractions and fun going on there and in this article we’ll veer from the normal Universal Studios-themed articles and delve into all that ScareLA has to offer.

There’s a lot of aspects to Halloween, that run the full gamut of emotions. From child-like fun of trick-or-treating and candy to the violently macabre makeup and monsters, ScareLA had it all. You knew you were in the right place as you approached the Pasadena Convention Center and there was a giant inflatable pumpkin outside, in early August. While some may claim that Halloween is a late-October holiday, for many, the preparation for the festivities begin as early as November of the previous year. Of course, a lot of that work is behind the scenes and just consists of dropping small hints. So seeing such a full force of Halloween out in August is encouraging, at least to this editor, because of the fabled Christmas creep, slowly making sure that Halloween terminates as quickly as Christmas begins, enveloping what was left of Thanksgiving. 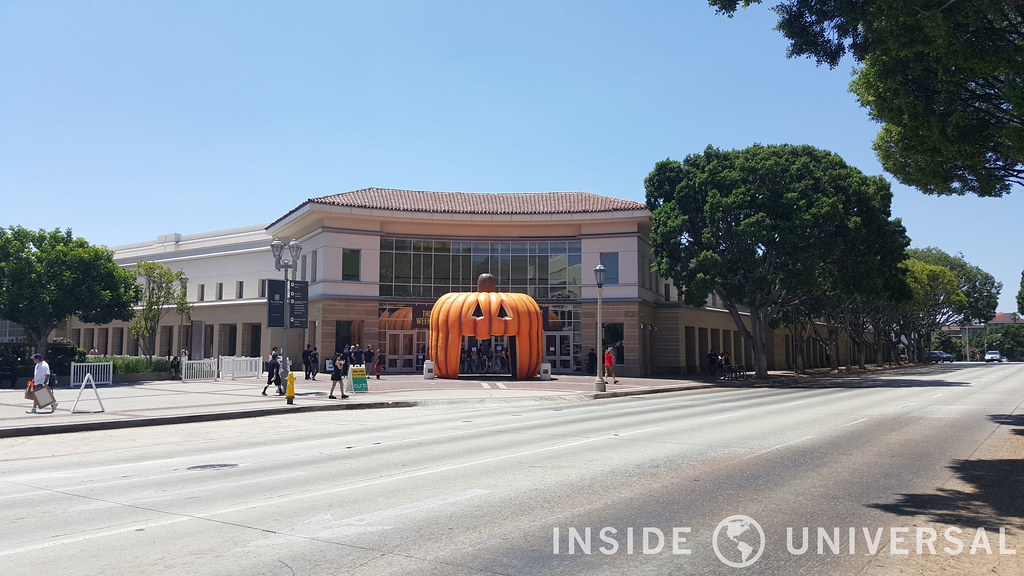 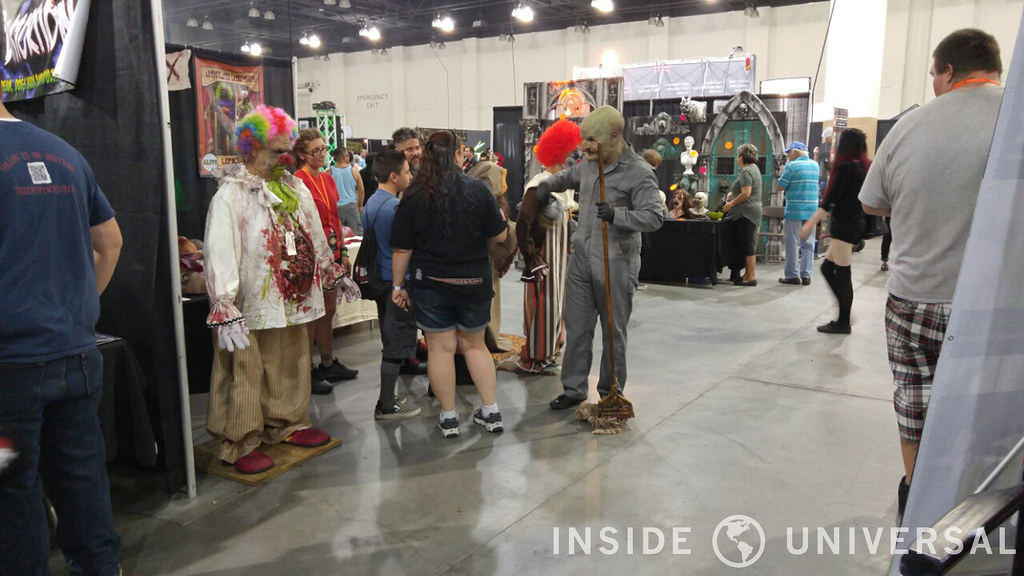 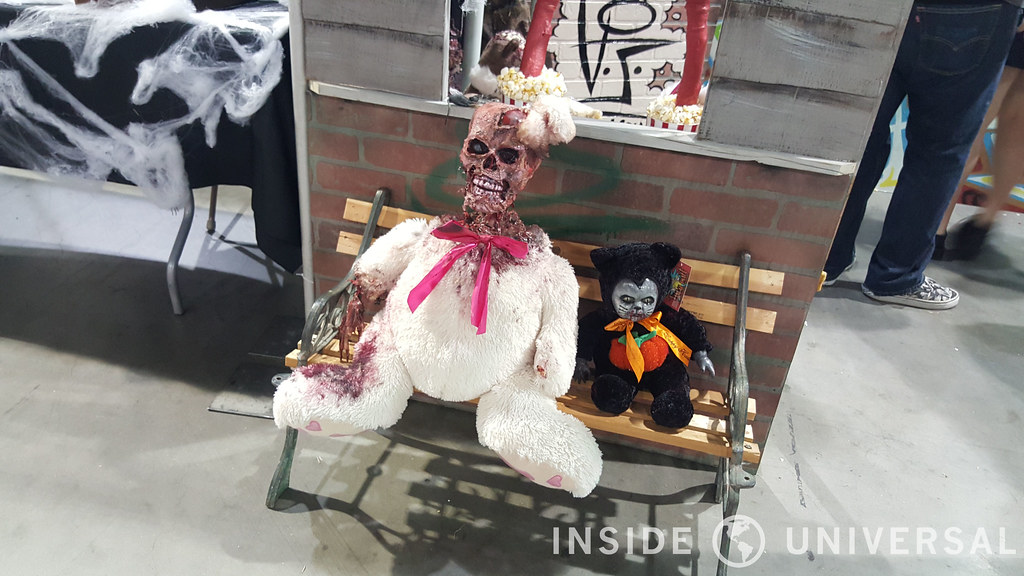 Entering its third year with a bang, ScareLA has continued to grow and expand its offerings and audiences. As you entered the main show floor, every direction was filled with aisles of booths, selling spooky wares and services, with plenty of people strolling around. I arrived just shortly after noon and was unable to park at the main complex. Even with a handful of enterprising parking lots nearby, it seemed they were caught off guard by the large turnout. However, as larger events started occurring, this spread out crowds to a much more manageable level. But you had better keep an eye out, because the entire show floor was a scare zone. Countless monsters were roaming up and down the aisles, frightening random guests, much to the pleasure of those around them.

The merchandise selection available was amazing. There was a fog juice company, hand-made dolls, and even creepy fabric you could buy by the yard. Even compared to previous years, the amount of booths was overwhelming. Mixed in between all of these were groups promoting their own home haunts or technology to make your home even scarier. If you want to learn how to get that gory makeup look, you could do that, too. They were running constant makeup classes, and competitions, too. Kids had a section for their own arts & crafts. It really behooves you to plan ahead of time with how you want to spend your day, otherwise it could easily be wasted running around distracted by everything to do.

“Countless monsters were roaming up and down the aisles, frightening random guests, much to the pleasure of those around them.”

That was just the main floor, too. Connected to it, in a small corner was a room full of a half-dozen free mini-haunts. The wait approached around 30 minutes for some, but quickly fell as the day went on. These free tastings of full size mazes were all a great treat. Each one was a unique experience, from an exorcism that gets really intense to a greenhouse experiment gone wrong. And even with the wait, these mazes avoided the common “conga line” issue of busier haunts. This is definitely put on by the fans for the fans and a big labor of love.

I could continue on and on. There was a “Serial Killer Speed Dating” event, a Guinness World Record attempt for opening bags of candy, live readings of a 3D Tales From The Crypt comic, complete with complimentary 3D glasses, and plenty of panels. Everyone had some panel they were dying to attend. Nearly every Halloween-related event in Southern California and Nevada had representation to some degree. While Universal Studio’s HHN Panel with Chris Williams and John Murdy was the most attended, the others drew sizable crowds as well. Knott’s revealed a lot of information, too, hosted by the charismatic Jeff Tucker, discussing one of their newest mazes, the return of Elvira, who graciously stopped by, and their season pass improvements. Even the Queen Mary: Dark Harbor had a great showing, revealing a paintball with zombies event. Dark Harbor’s own resident magician, Mudd The Magnificent, was entertaining the crowds waiting to enter all of the panels. 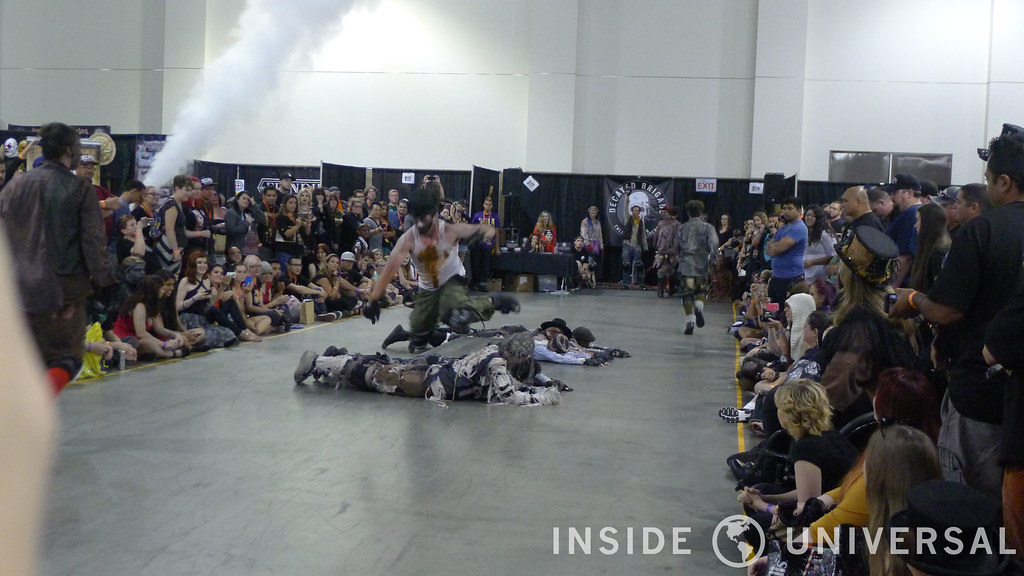 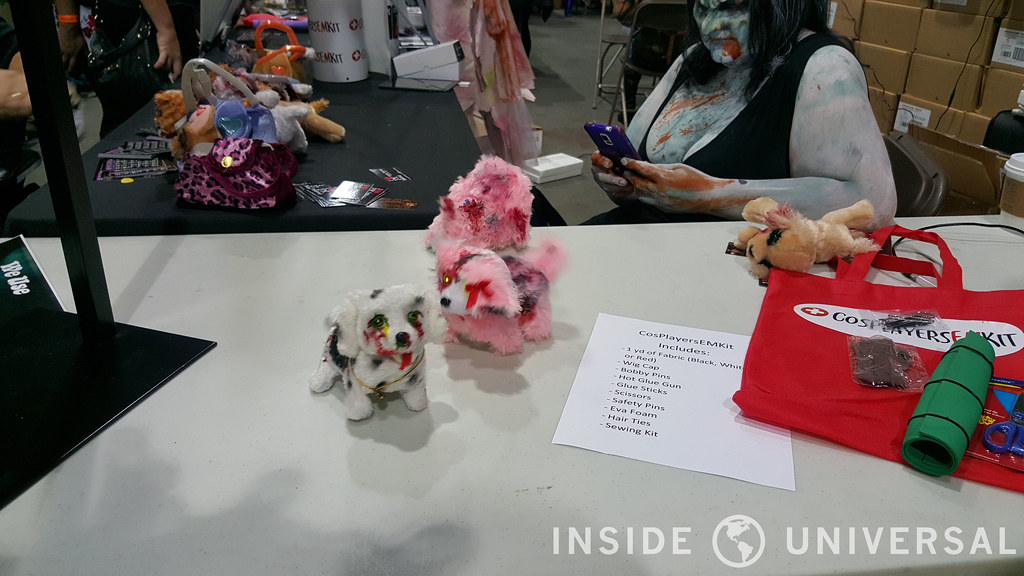 Invariably there is going to be some aspect of ScareLA that doesn’t get discussed, and it’s not for a dislike of it. There is simply so much going on. We’ll close this feature with one of the more popular and relatable spectacles. Any visitor to Knott’s will be familiar with their types of monsters. One of the more acrobatic breeds are the sliders, creatures that build up a running start just to finish inches from your body. Taking place with 3 shows each day, the Decayed Brigade amazed the audiences with their sliding skills, jumping over each other with impressive coordination, all while being dressed up as the freaks of Halloween you’ve come to know and love and fear.

All in all, the team behind ScareLA continues to improve on the event and have proven themselves to be some of the most dedicated people in their respective industries. Every time I saw them on the showfloors, the conversations had to be brief, as they were keeping everything in check. Of course, that doesn’t mean they don’t know how to have fun. Between the two days, as night falls on the first day is the Bloody Ballroom, billed as the only Halloween part of the summer. Generally every conversation with people on the first day would eventually get to the inevitable “Are you going to the Bloody Ballroom tonight?” question, so it was definitely on everyone’s minds.

“All in all, the team behind ScareLA continues to improve on the event and have proven themselves to be some of the most dedicated people in their respective industries.”

If you have any interest in attending the show and missed it this year, fret not because next year’s dates have already been announced, taking place on August 6th and 7th, 2016. We strongly encourage everybody of the spooky persuasion to make an effort to attend. You won’t regret it.