To set the stage, it’s worth noting that Universal and AMC have had a close ongoing working relationship for the past several years, with Greg Nicotero and John Murdy collaborating to create mazes and scare zones inspired by The Walking Dead at Halloween Horror Nights. In fact, this close collaboration can trace its origins before the debut of AMC’s smash hit, with the The Walking Dead production crew approaching the creative team for Horror Nights about bringing the television show to the park’s annual nighttime scare fest before the series debut. 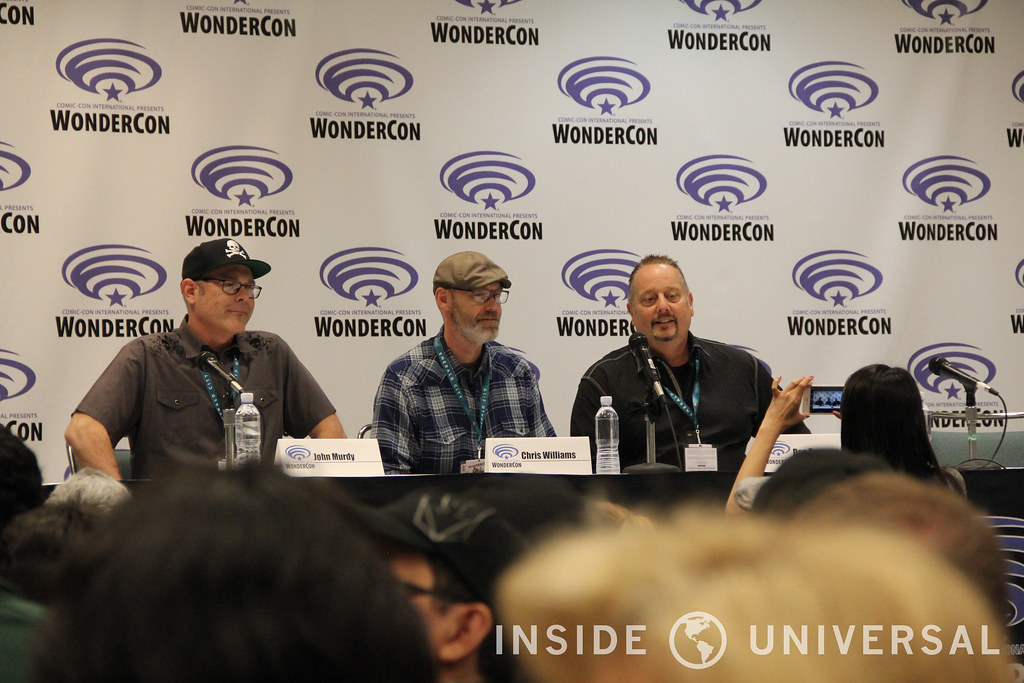 As John Murdy explained to the WonderCon audience, “AMC approached us to do The Walking Dead for Halloween Horror Nights before the show premiered and I thought well, let’s wait and see how the show does.” The rest – as you can probably imagine – is history. The show became an instant hit and both teams decided that this new television sensation would integrate perfectly in Halloween Horror Night’s leading roster.

When it became time to develop this new year round attraction, the panel wanted to emphasize that even though they’ve created mazes for the last four years (perhaps to the chagrin of die-hard Halloween Horror Nights fans), the property would be better served in a permanent year round attraction versus the make shift mazes they create for Horror Nights. As development progressed, Universal knew they had to make this new attraction special, so instead of placing this in an existing building, they built a brand new structure specifically made for The Walking Dead. 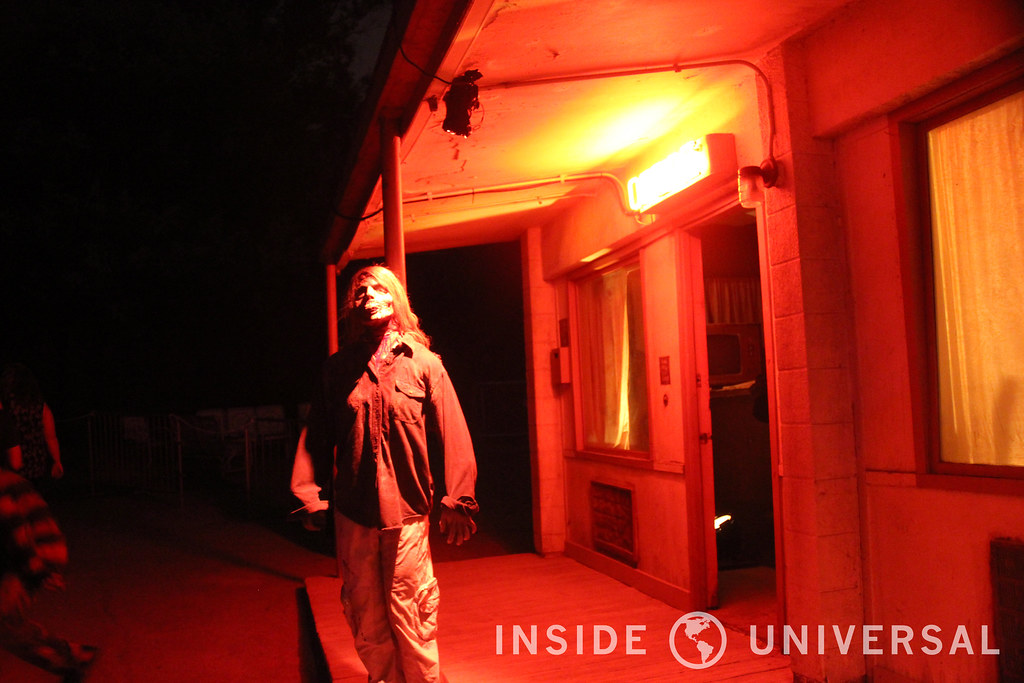 A scene from 2013’s Terror Tram: Invaded by The Walking Dead

As Murdy, Williams and Burgess began developing this new attraction, Greg Nicotero (producer of The Walking Dead) was asked to be a collaborator in this project – a role that he served in Halloween Horror Nights’ previous Walking Dead mazes. The goal was simple: how do we create an exceptional experience that would dramatically exceed a typical maze that one would normally experience during Horror Nights. With that singular mission in mind, Greg Nicotero and his team were tasked with creating all new animatronics for the attraction. Specific details weren’t revealed, so while they did mention that animatronics would be a part of the maze, there was no other mention of how they would be deployed.

For the last few years, The Walking Dead maze at Halloween Horror Nights was themed and designed to the current season of the show that aired in that specific period of time – keeping a sense of strong continuity between the series and the maze. This time around, the creative team will take a comprehensive look at the canon of the series without focusing on a singular time period or place. To set that tone, The Walking Dead Attraction will take you back to the very beginning of the television series, with the queue being set in the hospital scene from the pilot episode (which will include the infamous “Don’t Open Dead Inside” doors that will also serve as a photo opportunity for guests).

As development continued, Murdy noted that the crew “designed twelve full different versions of this attraction before we [Universal] landed on the one we are doing.” What makes The Walking Dead Attraction inherently different than any other Horror Nights maze? Simple – space. “I fight for every inch of space on a Halloween Horror Night set” Chris Williams told the audience. When one creates a maze that will only be around for a couple of months, sacrifices must be made. Having a permanent version that will be close to seven minutes long allows the creative crew to have more freedom to try new and innovative ideas that would have otherwise been prohibitive in a temporary environment. 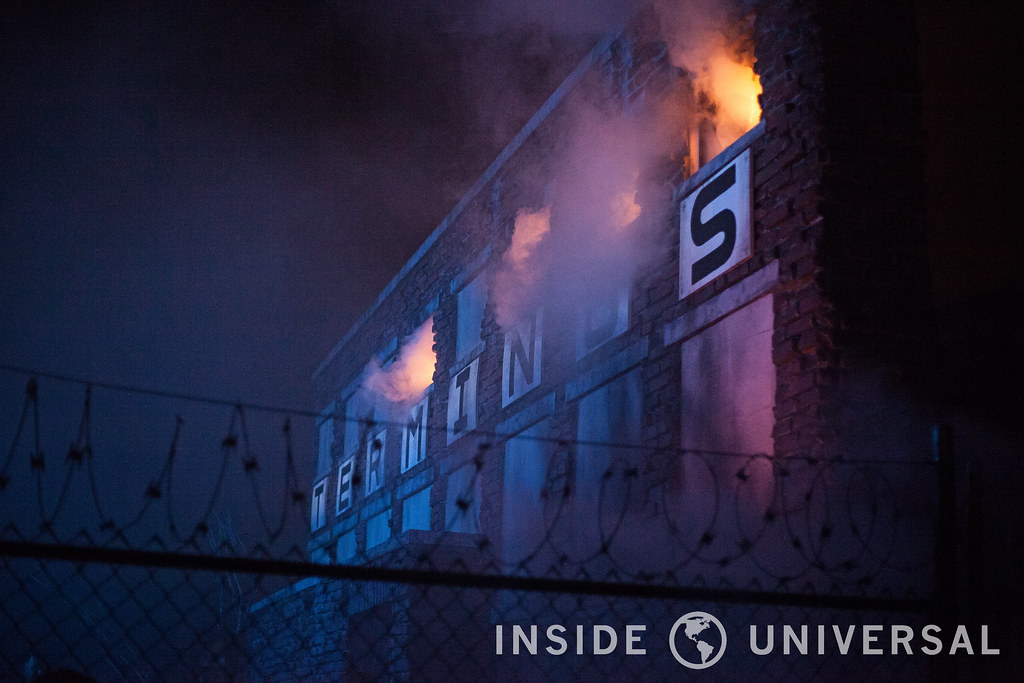 A scene from 2015’s The Walking Dead: Wolves Not Far

The panel then began to discuss some of the difficulties they encountered for Universal’s latest attraction. One noteworthy goal was the desired characteristics of the walker performers. For this, the crew sought two key elements: dead glassy eyes and a movable jaw to bite, which can be achieved with contacts and glued-on prosthetics. However, heavy-makeup in a 365 day a year attraction didn’t seem practical, so they developed a thin, light weight silicon mask that the performer can wear to achieve the desired effect. A video of the research and development was shown of the walker mask’s, with the “dead eye” effect as well as the jaw movements without the involvement of contacts and spirit gum.

One of the more interesting parts of the panel discussion was a faux fire effect that will be used in the attraction for the infamous burning cabin scene. It uses lighting, smoke and wind to create the illusion of fire. The crew noted how the effect was safe enough for guests to place their hand in the middle of the flames, creating a fun – and more importantly safe – effect.

In the end, the major takeaway was that John Murdy wanted to stress the importance of creating a full-fledged attraction. They must go the full distance to create a living, breathing environment that would create a sense of vulnerability and honor the show’s rabid fan base with accurate references from the television series.

Auditions will be held May 5th and 6th for The Walking Dead Attraction, and the experience will open this summer only at Universal Studios Hollywood.

Written with contributions from Christopher Tillman