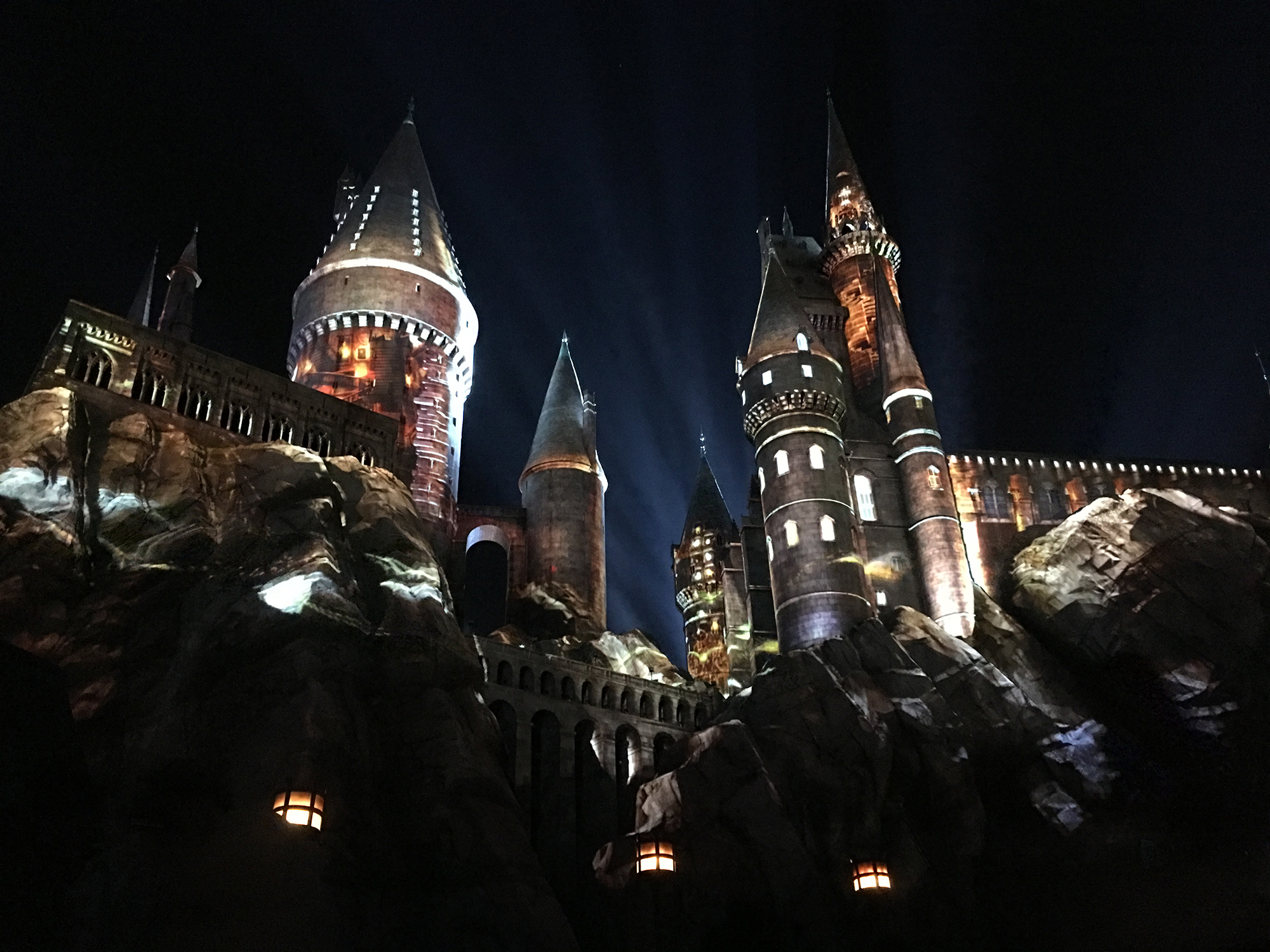 While the show does not officially begin until June 23, Universal began technical rehearsals on May 27. Please note that this article is a review of what was seen on May 27, 28 and 29 as some of the show elements may change or stay the same come opening day. Also, remember that since the show is in technical rehearsal it is not guaranteed to be showing on any given night until it’s official opening.

On May 27 and 28, stanchions which create the viewing areas, are brought out roughly two and half-hours before the first showing which was at 8:40pm. The first viewing area – which we feel to be the best view for the show – is right in front the of stage where the Frog Choir and Tri-Wizard Spirit Rally perform. Guests were being let in roughly an hour and a half before the first show. Since the show is not being advertised, you don’t necessarily have to show up around 7. But once word gets out, you’ll most definitely want to check-in as soon as possible.

The second viewing area is over by the stroller parking for Forbidden Journey and Flight of the Hippogriff. While this viewing spot is fine, you won’t be able to get the full view of the castle and show.

While on May 29 Universal did away with the stanchions and guests were either in the know of the show taking place or just happened to come upon it.

The premise of the show is the Sorting Hat narrates your magical journey in the Wizarding World, centered around Hogwarts Castle. You’re introduced to each house, Ravenclaw, Hufflepuff, Slytherin and Gryffindor and given a glimpse into the mysteries that await.

While we won’t go into too much detail as we don’t want to spoil the magic that surrounds the show; the show is a much needed addition to the park, that has lacked a nighttime spectacular since 1994 – when Universal Studios Hollywood brought Spectrablast for their Hollywood Nights 30th Anniversary.

While the show only has a running time of 5 minutes, Universal packs a lot into the short time frame. With the combination of projections and lighting, you’ll be left awed and amazed. In watching the show you can tell Universal went all out to bring the immersive level of The Wizarding World of Harry Potter to the next level. With the addition of over 20 projectors, new lighting design and all new sound installation, Universal spared no expense.

This is perhaps one of the best uses of projections in a theme park. Since Universal decided against the use of fireworks, they’ve added an extra touch in dressing to the surrounding trees. What looks like pine cones during the day come alive at night – sparkling and gleaming during the show. The other aspect is the iconic score from composer John Williams, Universal reached out to the famed Abbey Road and recorded the score with a full orchestra.

We will have a more thorough article once the show officially debuts, but for now, if you’re able to grab a spot during one of the technical rehearsals do it, because come June 23 this will be one of the hottest events in Southern California.