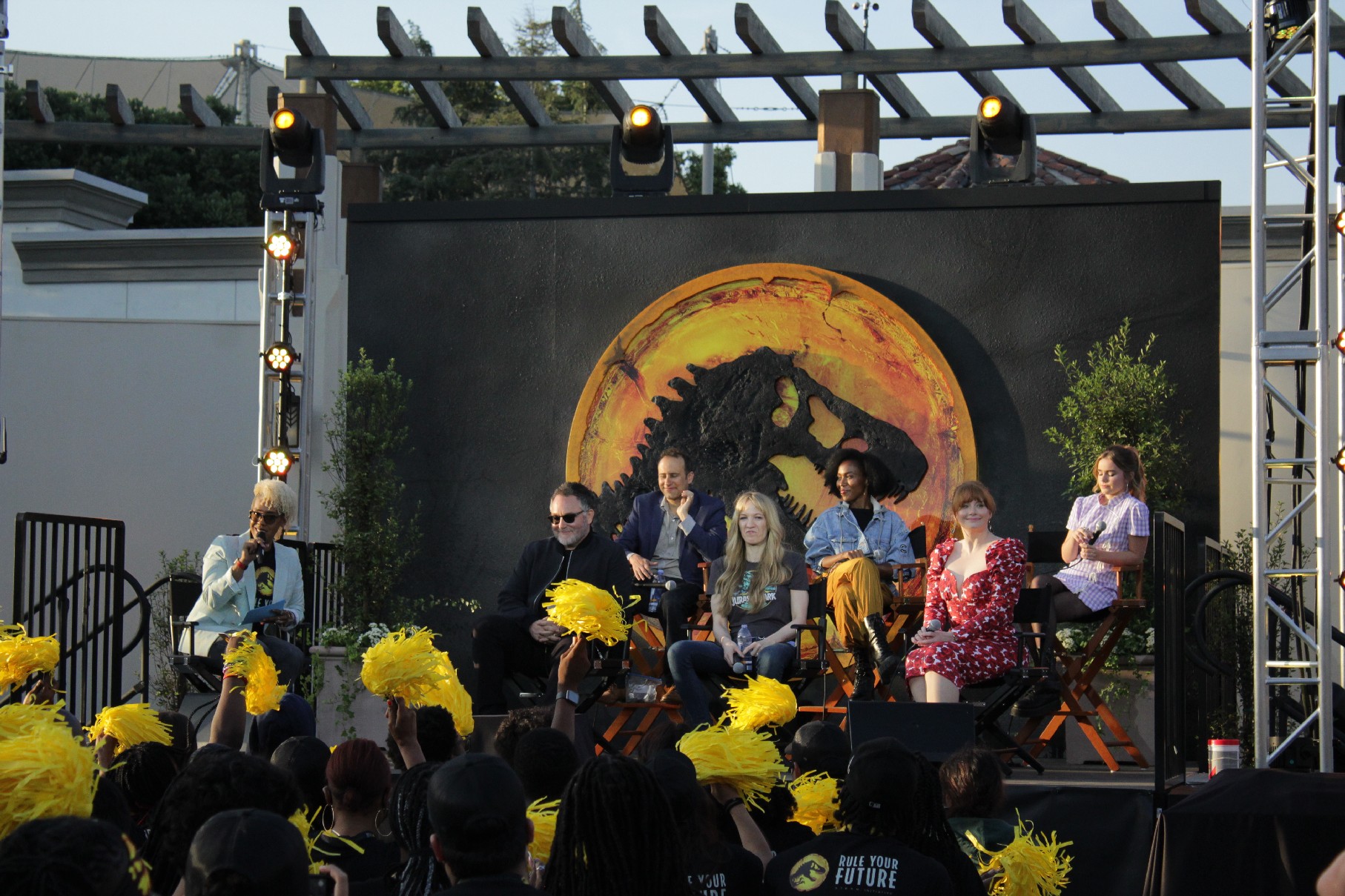 350 TRIO students along with their counselors were invited to the Jurassic World Rule Your Future STEAM Initiative Symposium which took place from June 3rd to June 5th.

Last year, Comcast NBCUniversal announced Project UP, a $1 billion, 10 year commitment to help everyone in society to build a future of unlimited possibilities. The STEAM Initiative aims to inspire and engage students through disciplines in Science, Technology, Engineering, Arts, and Mathematics. The program strives to both prepare and provide students with the resources as well as the opportunities necessary to succeed in the growing digital world.

Kimberly Jones, Executive Vice President at the COE expressed that this program would be a transformative moment for the students.

The first to be introduced on the panel was director Colin Trevorrow, official paleontology consultant, Steve Brusatte, and Emily Carmichael who served as one of the co-writers for the screenplay.

The panel was then joined by three stars from the upcoming film – Bryce Dallas Howard, DeWanda Wise, and Isabella Sermon.

In relation to STEAM, the panel was asked to speak about their experiences working with technology throughout the production of the film and Howard shared her experience of watching Jurassic Park for the first time:

“I was 12 years old when I saw Jurassic Park in the theaters in 1993, opening weekend and I remember so vividly seeing the dinosaurs in Jurassic Park and crying. I was so moved by it and part of the reason I was so emotional is because ever since I was a kid, even younger than that I’d been so fascinated with all of the incredible opportunities that exist within cinema for emerging technology. When you see a movie and you see an image that you don’t understand how that exists and yet it feels real to you that’s truly the magic of movies. That is something that I felt in a huge way when I saw Jurassic Park for the first time. It certainly motivated me as a storyteller to seek out opportunities to push the medium forward. To push cinema forward and do what Stephen Spielberg did all those years ago. ”

As the students brought their own questions to the panel, Trevorrow urged students to “never lose the magic of that experience of forgetting that anyone made what you’re watching and experiencing and knowing that it happened.” Carmichael advised to “have faith in your work…It is important, it’s the most important thing. Whatever you’re doing on your own to express yourself, to learn more about a form of art that interests you, that will save you and that can take you places. Don’t be afraid to invest in it.”

At the end of the panel, Trevorrow expressed his gratitude along with appreciation and invited the students to attend an early screening of the film on Sunday morning. Johnson was invited back to the stage to present the final surprise along with Canes and Trevorrow to provide all the students with free laptops.

The students fired with excitement and stood up with their yellow pom-poms in the air and expressions of gratitude could be heard all across the crowd. After a group photo was taken, the panel concluded and students were free to take photos with various backdrops that were placed along the Plaza.

The thrilling and epic conclusion of the Jurassic era – Jurassic World: Dominion will be released in theaters this Friday, June 10th.