Despicable Me: Minion Mayhem has been confirmed and will be coming to Universal Studios Hollywood in 2013! Wow, that is very soon! There is still much speculation about where this attraction will be located. Many avenues point to the removal of Terminator 2:3D Battle Across Time. Terminator opened at USH in 1999 and we should hear soon about when the final performance may be. It will be nice to have more family friendly attractions at USH, especially a ride geared toward children.

Could Despicable Me take over the Panasonic Theater where Shrek 4D currently is located? There has also been discussion of a Despicable Me playgound which will be something different from the Orlando counterpart and would not be difficult to replace Blast Zone/Curious George (or AquaZone/Coke Soak).

Stay tuned to www.InsideUniversal.net as this hot story developes! 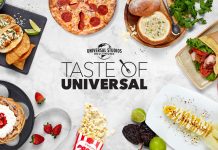 Brian Glenn - March 5, 2021 0
Universal Orlando’s Halloween Horror Nights is back – returning this fall for its much-anticipated 30th year on select nights beginning on September 3 through...

Brian Glenn - March 3, 2021 0
Universal Orlando has confirmed that Epic Universe will resume construction immediately and that their new theme park is back in business! Epic Universe was announced...

Brian Glenn - March 2, 2021 0
The park is finally open!... Kinda... Universal Studios Hollywood has announced a new "Taste of Universal" food festival that will be held inside the park...

Brian Glenn - February 27, 2021 0
The Habit Burger Grill will officially open at CityWalk Hollywood on March 1. Featuring a menu of charbroiled burgers, chicken sandwiches, fries, and more; the...
© 2020 - All Rights Reserved - Inside Universal is not affiliated with Comcast, NBCUniversal, Universal Parks & Resorts, The Walt Disney Company, The Blackstone Group, or SeaWorld Parks & Entertainment. You may not copy, redistribute, publish, sell, or otherwise make the original contents of this website available to third parties unless you have received prior authorization from Inside Universal.
This website uses cookies to improve your experience. We'll assume you're ok with this, but you can opt-out if you wish.Accept Read More
Privacy & Cookies Policy