August 15, 2013 – Just announced: The Purge will be coming to Universal Studios Hollywood this September and October for Halloween Horror Nights. The annual horror event will be creating an all new scare zone based on the 2013 thriller directed by James DeMonaco and starring Ethan Hawke. 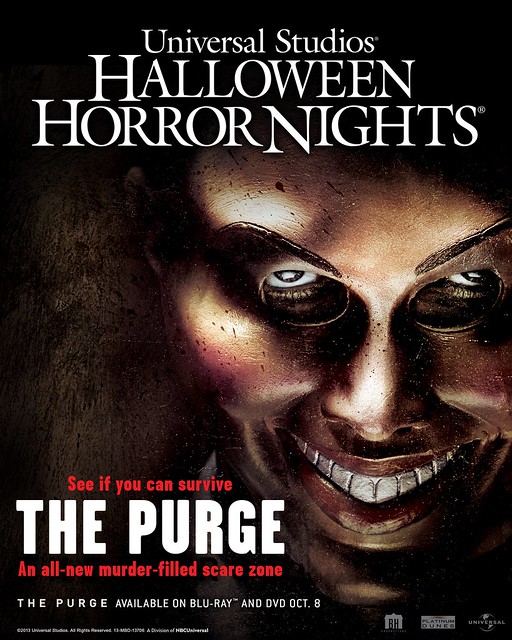 The Purge is set in the not-too-distant future of 2022, where the United States crime rates have reached an all-time low due mostly to the annual “Purge”, a 12 hour period in which all crime is legal, and emergency services are suspended. The film follows the Sandin family and their effort to survive the cathartic Purge that has just begun. 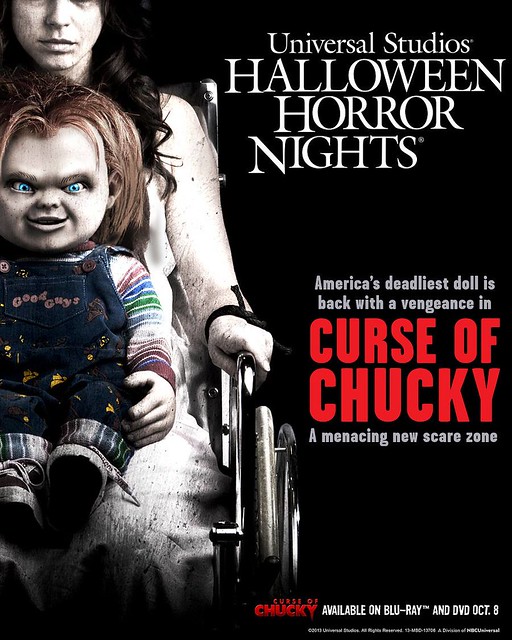 In similar fashion, another new scare zone was also announced a short time later – this time based on the film Curse of Chucky. One of Universal’s better known horror franchises, Ckuchy has spawned a total of six films centered around the foul-mouthed demonic doll. We’ve included the press release from Universal below:

Designed to provoke an unrelenting sense of fear for “Halloween Horror Nights” guests, numerous scare-zones will be riddled throughout the event to consistently terrify and traumatize them at every unsuspecting twist and turn.

The provocative box-office blockbuster, The Purge, will come to life as “The Purge: Survive the Night.” As guests enter the theme park, they will be thrust into the depraved world of The Purge, a sordid tale in which all crime is declared legal and no one is safe for one single night; a story, in which all criminal activity, including murder, is legal for 12 hours. Ironically, the gates to “Halloween Horror Nights” swing open at 7:00 p.m. sharp; the same time havoc is reaped upon the citizens in The Purge.

“The Purge: Survive the Night” scare zone will push guests to the limits as they become engaged in the film’s most memorable scenes while trying to run for their lives.

Inspired by the upcoming Blu-ray™ and DVD release of Curse of Chucky, the eponymous scare-zone will bring the terrifying pint-size doll, possessed by the spirit of a notorious serial killer, to life. Having made special appearances at past “Halloween Horror Nights,” this is the first time the sinister doll has commanded his own scare-zone to shock and terrify guests for his amusement.

The Purge, a thought-provoking thriller from director and writer James DeMonaco (Assault on Precinct 13, The Negotiator) and producer Jason Blum (Paranormal Activity, Sinister), stars Ethan Hawke (Sinister, Insidious, Training Day) and Lena Headey (“Game of Thrones”) as a husband and wife engulfed in the madness of a lawless night, The Purge will be available on Blu-ray™ Combo Pack with DVD, Digital including UltraViolet™, and On Demand on October 8, 2013, from Universal Studios Home Entertainment.

Curse of Chucky, the newest installment of the chilling Child’s Play franchise, comes exclusively to Blu-ray™ and DVD on October 8, 2013, from Universal 1440 Entertainment, a production entity of Universal Studios Home Entertainment. Also available on Digital on September 24, 2013, Curse of Chucky reunites franchise creators Don Mancini and David Kirschner twenty-five years later, as the deadly legacy continues and Chucky resumes his disturbing reign of terror, delivering more of the blood-curdling scares and bone-chilling twists that have cemented his place as one of the world’s most legendary horror film icons.

“Halloween Horror Nights” 2013 at Universal Studios Hollywood brings together the sickest minds in horror to immerse guests in a living, breathing, three-dimensional world of terror, and offers a slate of unrivaled film production quality mazes, Scare Zones and “Terror Tram” experience – all uniquely themed to today’s most definitive horror properties. This year’s haunted attractions will also include: “The Walking Dead: No Safe Haven,” based on AMC’s Golden Globe-nominated, Emmy Award-winning TV show, “Evil Dead: Book of the Dead,” inspired by Sony Pictures Home Entertainment’s chilling remake of the cult classic, “Insidious: Into The Further,” based on the 2010 horror thriller “Insidious” and the upcoming sequel “Insidious: Chapter 2,” and “Black Sabbath 13 3D,” inspired by the darkest lyrics from the multi-platinum rock band’s 43-year history of Heavy Metal music.