October 5, 2013 – Fall has finally come to Southern California, and with the weather change comes something else – Halloween events! And Universal Studios has already begun their signature scare event Halloween Horror Nights, featuring The Walking Dead. Amidst all the thrills and chills, the landscape of the theme park has also been changing rapidly.

Here’s a look at what’s hot – and what’s chilling and thrilling – at Universal Studios Hollywood this season!

The fan favorite stunt show has received a much anticipated sound upgrade. The new Bose RoomMatch line array setup was installed bit by bit across September, and was finally completed and put on-line this past weekend as confirmed by user Jonathan Green. With the new system comes an upgraded and controlled sound, and a few sound effects that have left fans of the show divided. Some of these new affects were called “cartoonish”, and it is uncertain how long – if at all – they will remain as the system ages.

The stunt show, which is now the only live action stunt show remaining in the park following the closure of Terminator 2:3D last winter, remains highly popular, and despite rumors of a pending closure, is still running strong. Current contracts for the actors of the show run through the 2015 season. The future of the show beyond this is still uncertain, but for now it is safe.

However, the same could not be said of a few other long-time attractions, which have had their final runs this past month…

As we detailed in the first half of September, The Adventures of Curious George playground has been closed and completely leveled to make way for the Wizarding World of Harry Potter, slated to open in 2016.

Along with Curious George, the famed Gibson Amphitheatre also saw its final performance that same weekend. The Gibson appears to be coming down entirely, contrary to previous beliefs that the current structure would be re-purposed. 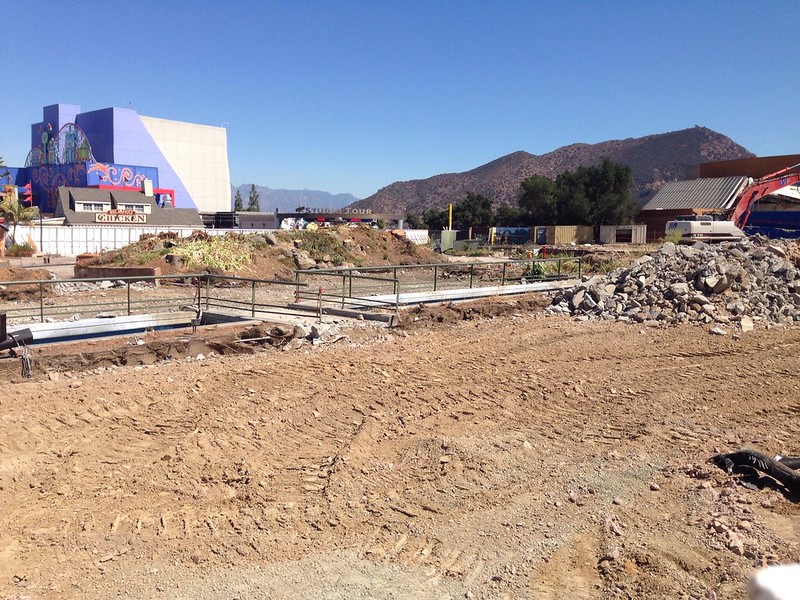 These two areas began demolition the day following their closures, and currently show no indication of their later form. We’ll be following the development of these areas in the upcoming year.

But the Upper Lot isn’t the only area of the park seeing changes right now. There have been a few changes down on the backlot in the world famous Studio Tour as well.

The Spinning Tunnel was a mainstay of the tour for decades, and previous incarnations include the Ice Tunnel, Dante’s Peak, and even a seasonal overlay of Mount Crumpit featuring the Grinch during the Who-lidays at Grinchmas.

From what we’ve seen, the tunnel has already been fully demolished, and the future of that area on the backlot is still unclear. As mentioned previously in our pieces regarding the Expansion Plan , there is a new tour attraction slated to arrive sometime in the next few years. However, the proposed location is not where the Mummy’s Tomb sat. Again, details are unclear, but we will be following the progress of this area.

Slightly related to this is the closure of the Fast and the Furious Extreme Close Up, which has been indefinitely suspended. Nothing else is currently known about this closure other than rumors, but one thing is for certain: we won’t be hearing Gasolina in the park for some time (Much to the relief of many a tour guide I’m sure).

The newly opened Universal Plaza has continued to develop, with minor additions being made each day to further detail the area. One such addition to the new area is the Universal Box Office, which replaces the Hollywood Ticket Outlet. The Box Office will serve the same function as the Ticket Outlet, providing tickets to live tapings of various NBC shows and other benefits. The new Box Office is located near the main entrance for Plaza, directly below the Plaza Tower.

Unfortunately, the recent additions have also followed with the removal of the short-lived Studio Tour dog from Pink’s Hotdogs. We’re not sure what spurred the removal, but we’re told that a replacement hotdog (currently named the “Engagement Ring Dog”) is currently in its place.

As Plaza continues to develop, regulars and new guests alike have been taking note of the drastic change it has brought to the feel of the park. For more information on the brand new Universal Plaza and a fuller account of the area, check out our previous article detailing the opening.

Opening a week before Knotts Berry Farm’s own Halloween Haunt, Universal Studios’ Halloween Horror Nights is now in full swing. Starting September 20th and running all the way through October (and the first week of November!), HHN is SoCal’s signature fright night destination. For full coverage of all mazes and attractions in this year’s event, including the two Walking Dead attractions, be sure to check out our features page, where we have articles and commentary on each part of the event.

That’s it from us this month! Be sure to check back with us for updates on the closures and construction, and for continuing coverage of HHN.

If you’d like to join the discussion, come join us on our forums and Facebook page to add your opinions to the mix! To hear more of our opinions on recent events, check out this month’s videocast. As always, thanks for reading! This is Miss B, signing off.