Fans of the hit series will be able to enjoy two days of spellbinding activities featuring some of their favorite cast members, including Paola Andino (Emma Alonso), Nick Merico (Daniel Miller), Paris Smith (Maddie Van Pelt) and Rahart Adams (Jax Novoa). Nickelodeon’s “Every Witch Way” Weekend will also give guests the opportunity to:

“Every Witch Way” is a spell-binding tale that follows teenager Emma Alfonso (Paola Andino) as she moves to Miami and discovers that she isn’t so ordinary—she’s a witch. The series, which recently concluded its second season, is a bona fide hit consistently winning its time period (Mon–Fri, 7:30-8 p.m. ET/PT) with kids 2-11. Season 3 of “Every Witch Way” will premiere in 2015, sparking mystery and adventure with a daily dose of magic that will keep viewers captivated and enchanted.

The event is included with admission to Universal Orlando theme parks.  For more information, visit http://www.UniversalOrlando.com/events/everywitchway.aspx. 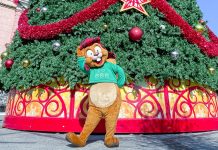