June 5, 2015 – Earlier this week, AECOM released their 2014 Theme Index which measures attendance numbers from theme parks around the world.

Since 2010, Universal Studios Hollywood has experienced steady growth with the addition of the wildly successful King Kong 360 3-D and attendance continues to grow today with the 5-year transformation of the park.

In 2014 Universal Studios Hollywood’s percentage gain ranked 4th in the world with an 11% increase in attendance; a 676,000 guest increase from the previous year. The boost was attributed to the new Despicable Me: Minion Mayhem ride and Super Silly Fun Land interactive play area. 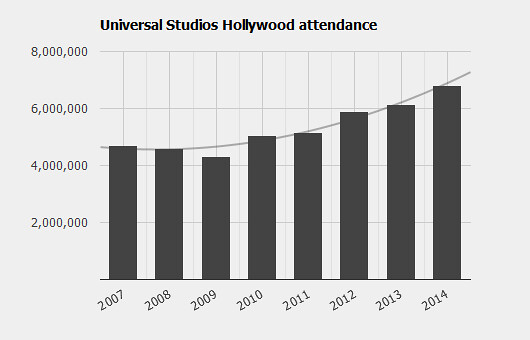 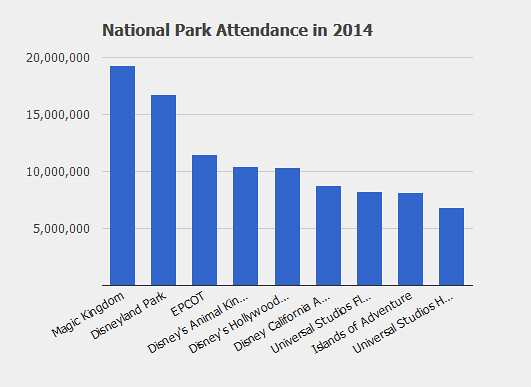 Taking the top six spots in North America, to no surprise, are all Disney parks followed by the three Universal parks. It’s easy to see the race for sixth place is quite close and within reach for Universal Studios Hollywood. To help boost attendance, Universal’s Hollywood park has three new offerings for 2015: Springfield U.S.A. (currently open), Nighttime Studio Tour (opening July 4th weekend), and the highly anticipated addition to the studio tour, Fast & Furious: Supercharged (opening June 25). All of these additions to the theme park are in preparation for the capstone of the 5-year transformation with The Wizarding World of Harry Potter (opening Spring 2016).

For 2015, the Disneyland Resort is celebrating its 60th anniversary with no new E-Ticket attractions, instead choosing to plus-up existing attractions and lands. As for their 2016 offerings, no announcements have been made. The year-long celebration will certainly help both Anaheim parks grow in attendance for 2015. Universal Orlando is also celebrating its 25th anniversary this year with no new attractions or show offerings while Islands of Adventure will open the highly anticipated Skull Island: Reign of Kong in 2016.

While Skull Island: Reign of Kong will most undoubtedly be a hit, one can imagine it will not compare to the masses that will descend upon Hollywood with The Wizarding World of Harry Potter. Since 2010, the Hollywood park has seen an average increase of about 500,000 guests each year with the opening of a new attraction but Potter has proof of guaranteed numbers that many theme parks only dream of.

To project the increased attendance of Potter when it debuts in Hollywood we have to look at what the Wizarding World has done for three other Universal parks. In 2010, Islands of Adventure saw an increase of 1,322,000 guests when Hogsmeade opened its gates (a 30.2% increase). In 2014, Universal Studios Japan opened their version and received a bump of 1,700,000 and Universal Studios Florida saw a hike of 1,021,000 with the opening of Diagon Alley in the same year. Comparing these numbers, Hollywood could very likely see a spike of over 1 million when Potter opens. Add the continued growth with the projected 2015 total and you have a possible attendance of over 8.5 million by the end of 2016. While these numbers are ambitious, Hollywood could have some issues in achieving these numbers based solely on the capacity of the theme park and the lack of infrastructure with parking, two issues they are aggressively working to solve. With other theme parks having a very narrow gap in attendance numbers, Universal Studios Hollywood is poised with a great opportunity to jump up a spot or two in the North American rankings for 2016.

Facts and figures provided by TEA/AECOM