September 29, 2015 – Welcome to another edition of Zoom Lens, where we take a closer look at specific areas of both the park and the studio. In my last Zoom Lens, I discussed the history of one of my favorite locations on the back lot, the Psycho House. Before that, we took an in depth look at the Court of Miracles made famous by some of its spooky inhabitants. Considering the backlot is my favorite part of this park, it makes sense that I inadvertently started a “Backlot Series.” So to continue with this theme, I decided to do a little research on an area that many are familiar with: Courthouse Square.

For those of you who have read anything I have written in the past, you know that I have an affinity towards Universal Studios’ horror history. You may be wondering why I chose an area of the backlot that is almost completely devoid of anything to do with Universal’s famous monsters. Well before my love for Lawrence Talbot, I had pretty large crush on Marty McFly. Imagine my excitement when I rode the Studio Tour for the first time, as we rounded the corner of Brownstone Street into Courthouse Square, I was told that this was the exact area that Marty hit 88 mph to get back home. 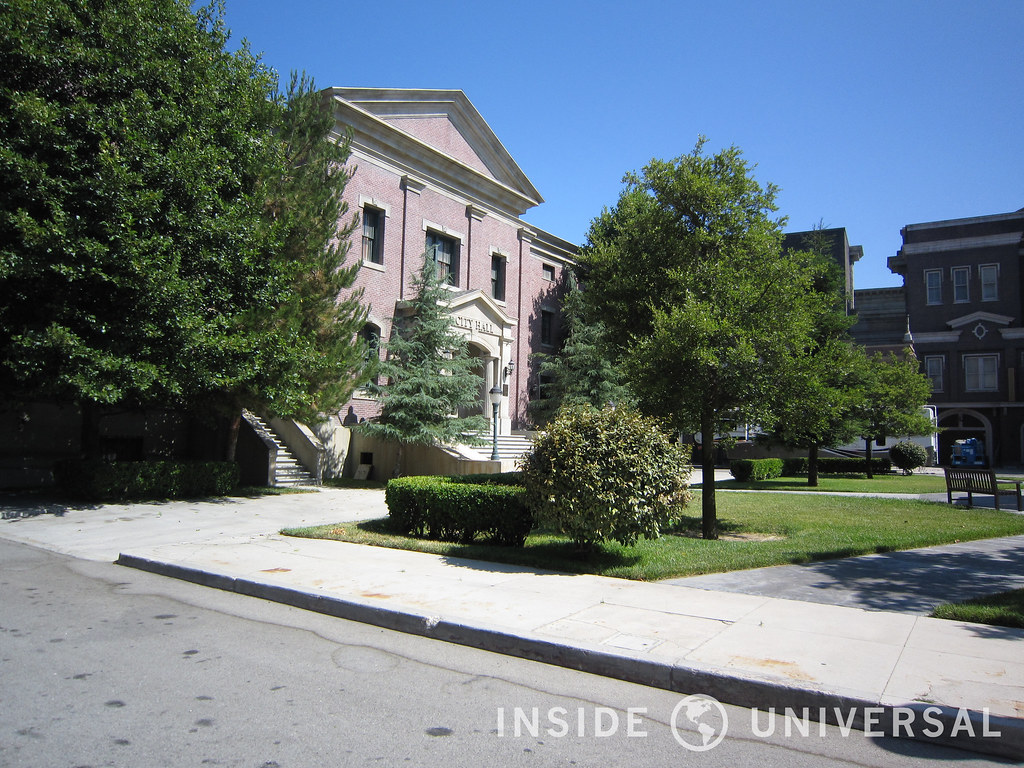 Many who are like me have ridden the Studio Tour dozens of times and know most, if not all, of the fun facts that accompany the various locations on the lot. However, I love seeing those who have never been on the Studio Tour get so excited when we enter Courthouse Square, or as they remember it, Hill Valley. While the Psycho sets and Court of Miracles are somewhat unique to horror lovers, Courthouse Square is known and loved by almost everyone.

Long before its appearance in the Back to the Future trilogy as Hill Valley, Courthouse Square had appeared in hundreds of Universal Studios films and TV shows, and those of various other studios. The courthouse itself was first seen in a 1948 Universal International Pictures film noir titled “An Act of Murder” where a judge is tempted to kill his wife with terminal cancer to end her suffering. These sets have been used time and again for other equally as dark projects as well as some more light-hearted franchises like “Leave it to Beaver” as Mayfield town square.

Set up like a typical town square, these sets are versatile enough to be used in a large variety of movies, television shows, and commercials without being readily recognized. Some of the more famous titles that have used these sets include “To Kill a Mockingbird” (1963, UI), “Knight Rider” (1982-1986, Universal Television), and as the town square of Kingston Falls in “Gremlins” (1984, Warner Bros. /Amblin Entertainment). For the horror fans out there, Courthouse Square was also used for a variety of horror-themed productions. Its earliest horror production was Jack Arnold’s “It Came from Outer Space” (1953), a Universal International Pictures horror film about strange alien influence on an Arizona town. This set was also featured heavily in the very first episode of Rod Serling’s “The Twilight Zone” titled “Where is Everybody?” in 1959. In this episode, a man finds himself in a town that appears to be completely deserted despite evidence of recent activity, such as food cooking on a stove or a cigar burning in an ashtray. The town this man hopelessly wanders around for the majority of the episode is, in fact, Courthouse Square. And, of course, Courthouse Square was used as the town of Fairvale in Richard Franklin’s “Psycho II” (1983). 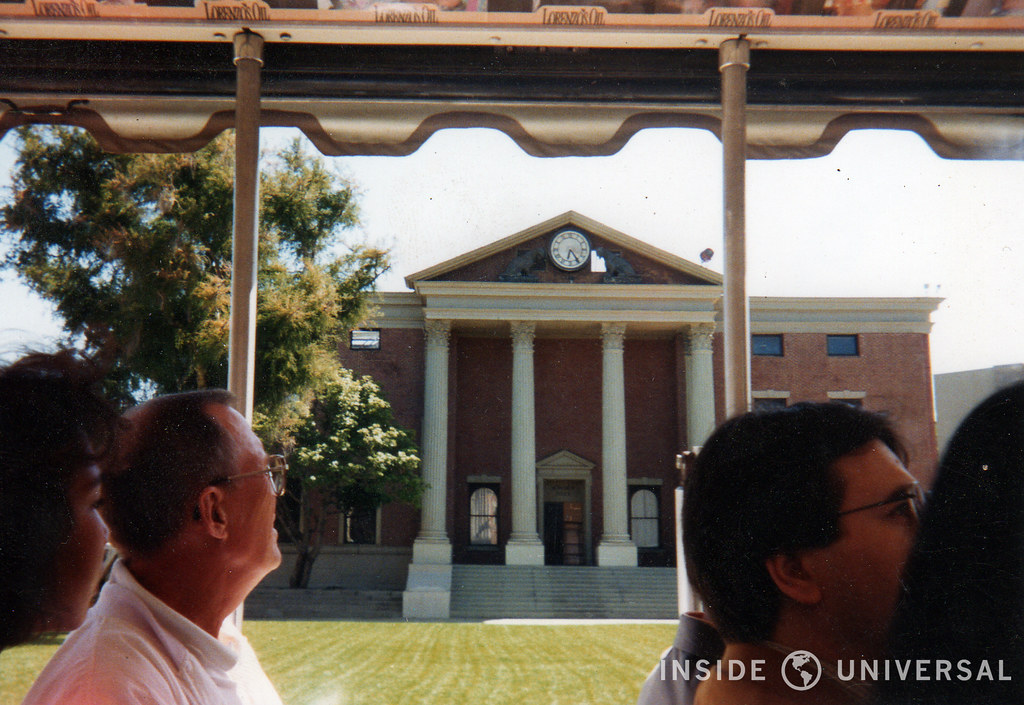 Perhaps its most memorable appearance was in the 1985 Robert Zemeckis film, “Back to the Future.” Utilized as the central hub of Marty McFly’s hometown, Hill Valley, Courthouse Square became one of the most famous sets in Universal Studios history. Throughout the “Back to the Future” trilogy, Courthouse Square was transformed from its newly established 1885 Hill Valley to the 1955 grass covered town square. In 1985, the Courthouse appears in disrepair and the grass field has been converted to a parking lot. However, by 2015, the area was revitalized complete with an artificial lake and Courthouse Mall. Finally, in Biff’s alternate timeline, the courthouse in Courthouse Square was changed into Biff Tannen’s Pleasure Paradise Hotel and Casino. Courthouse Square ended up becoming so famous that the area that once was able to be used in various productions without recognition was now so recognizable that Universal had to build a façade in front of the famous Courthouse.

In 2008, a fire overtook the backlot, destroying most of the sets as well as the King Kong attraction. While much of Courthouse Square was destroyed, the Courthouse itself managed to be spared. The new Courthouse Square was reopened on June 18, 2009 with the help of the USC marching band and costumed characters. Doc Brown even made an appearance!

The current set we see today was created for the CBS series “Ghost Whisperer” (2005-2010) starring Jennifer Love Hewitt. This includes the façade in front of the pillars, the absence of the clock, and a gazebo set in the center of the square. This current set can be seen in various productions including the recently completed series, “Parenthood,” starring Craig T. Nelson and Lauren Graham, as well as the recent Disney film, “Saving Mr. Banks” starring Tom Hanks.

Whether you get the chance to walk around this area while on the VIP tour or just driving by on the Studio Tour, it’s hard not to be amazed by the incredible history this area carries. At this point, hundreds of productions have taken place in this area; some that we may not remember, others that hold a special place in our hearts. While the studio I fell in love with for its expansive movie making history is quickly transforming into a major theme park, it will be extremely difficult to lose this history. The area has undergone countless refurbishments and even some redesigns, but it is impossible to be out on that set and not feel overwhelmed by the movie magic that occurred in that very place. This is why Courthouse Square, along with the Psycho House, Court of Miracles, and the rest of the backlot, will forever be my favorite place to visit at this park. 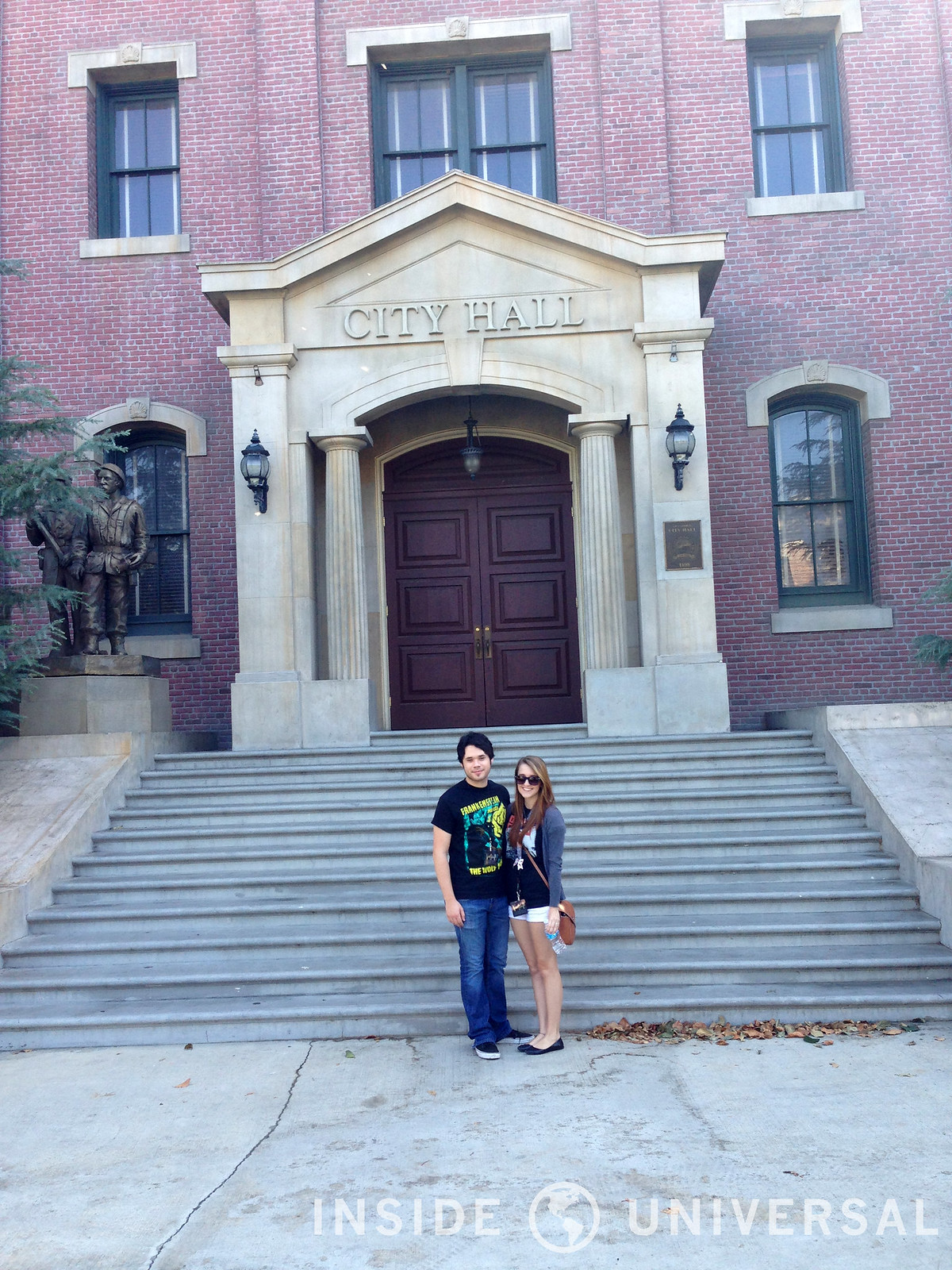 I hope you found as much joy reading this month’s Zoom Lens about Courthouse Square as I did researching it. As always, thank you so much for making Inside Universal your number one source for all things Universal Studios Hollywood! Stay tuned as we continue to unravel this studio’s vast history of movie making.