October 14, 2015 – Welcome back to our new series where we take a closer look at each maze from this year’s Halloween Horror Nights. As I mentioned in my previous article, these are meant to serve as an in depth look at each maze with some movie background and my overall impression of the maze. So as not to spoil any of the scares for you, I am choosing not to give a scene-by-scene review. I hope you enjoy!

Because of the secrecy behind this year’s terror tram, there was a lot of speculation over what it could be. For those like me, I was ready for a new terror tram concept. Don’t get me wrong, The Walking Dead was always executed very well. However, at a certain point, there are only so many zombies a person can see before getting underwhelmed. Finally, after what felt like months of teasing and hinting, Creative Director John Murdy revealed what he and a special guest had been working on, Terror Tram: Survive the Purge. It turns out the New Founding Fathers wanted to show their appreciation for our participation in their annual event by throwing us a Purge Party! 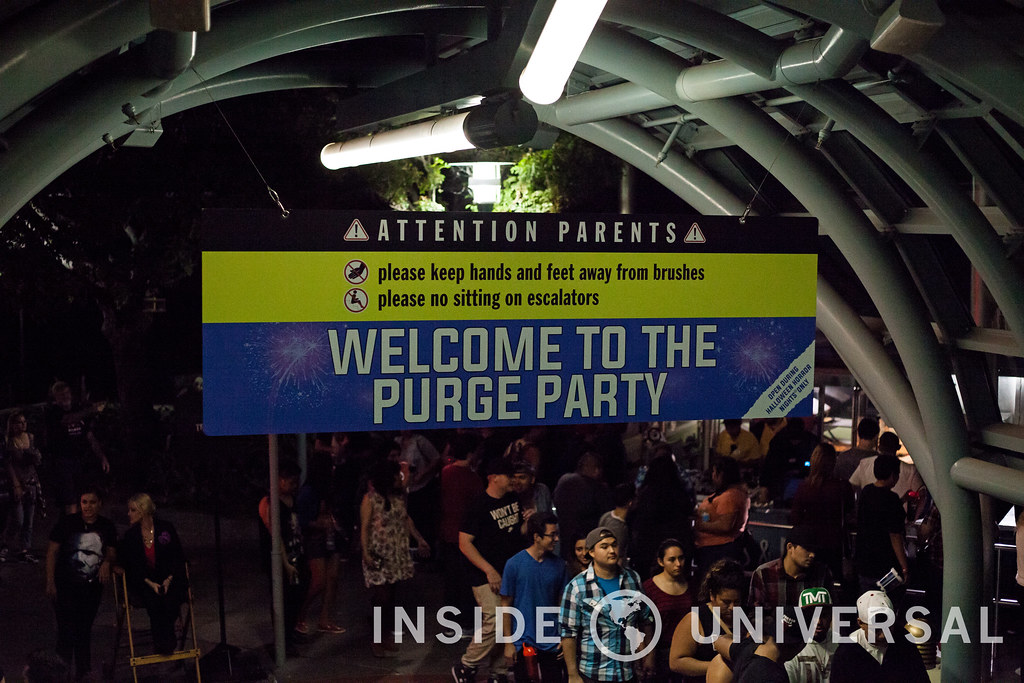 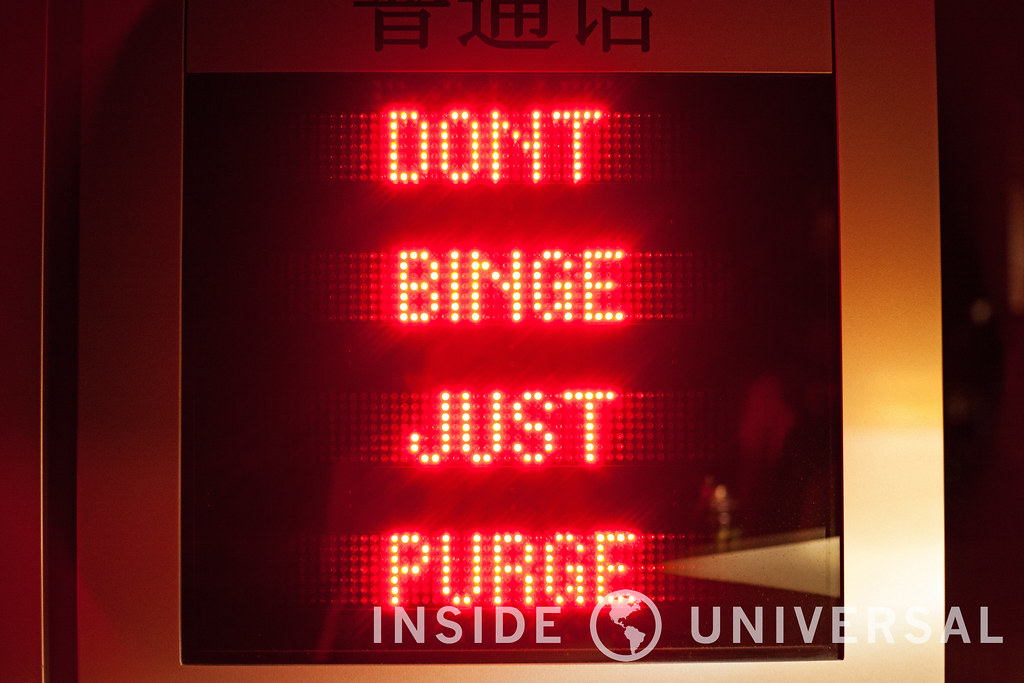 But before we get into that, let’s take a look at the Purge movie franchise pre-Halloween Horror Nights. In 2013, Director James DeMonaco released The Purge (DeMonaco, 2013) onto American society. In it, he revealed a new America, a nation reborn under the ruling of the “New Founding Fathers of America.” This new nation brags the lowest crime and unemployment rates in history, thanks to a new holiday the New Founding Fathers created. This holiday, known as “The Purge” takes place once a year over a 12 hour period. During this time, all criminal activity (including murder, theft, rape, etc.) becomes legal. This provides the American community to quite literally purge any negative emotions they have held all year in any method they desire.

“Instead of being a guest at this party, you are the party”

Unlike the first movie, that focuses primarily on one family being held hostage in their own home, The Purge: Anarchy (DeMonaco, 2014) takes the world of the New Founding Fathers of America to the streets. This year’s back lot Purge scare zone uses iconic moments from the 2014 movie to terrify you as you make your way from the tram to the back lot mazes. However, as promised, this year’s Terror Tram brings about an entirely new concept: The Purge Party.

In order to provide for those who would rather not participate in the annual Purge, The New Founding Fathers have created the Purge Party. This party serves as a safe alternative for guests to watch the night’s Purge events unfold on large video screens from the comfort of the Universal Studios backlot. Complete with songs, arts and crafts, and even a Children’s Charity Auction sponsored by the NFFA. Sounds like a pretty great time, or so they want you to think. It all turned out to be a clever rouse; instead of being a guest at this party, you are the party. Our good old Studio Tour guides deceived us and dropped us off at our imminent doom. 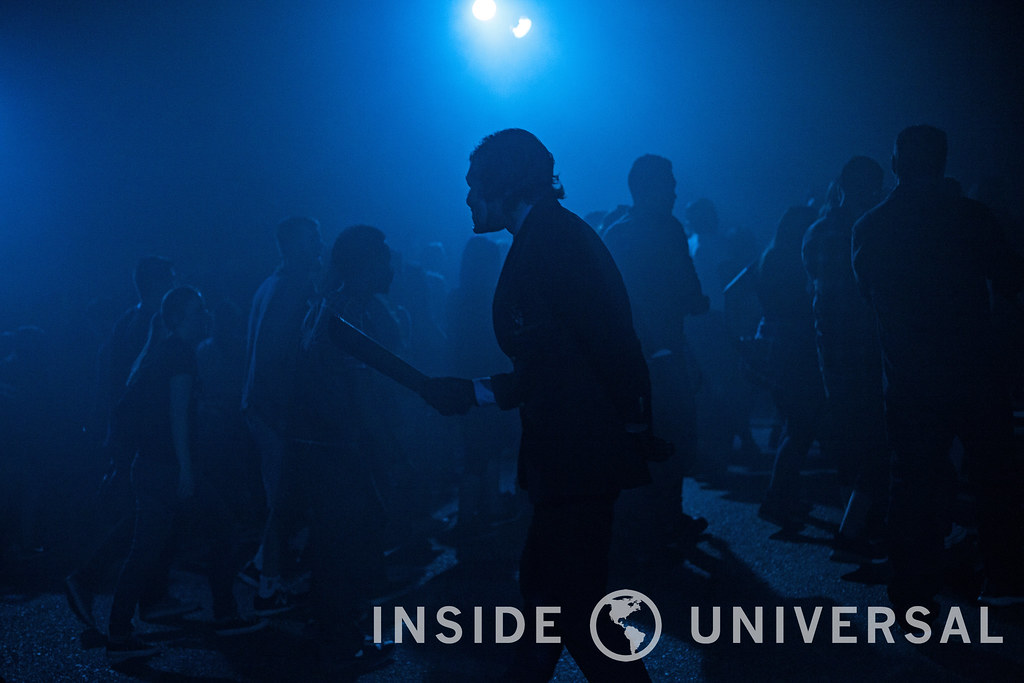 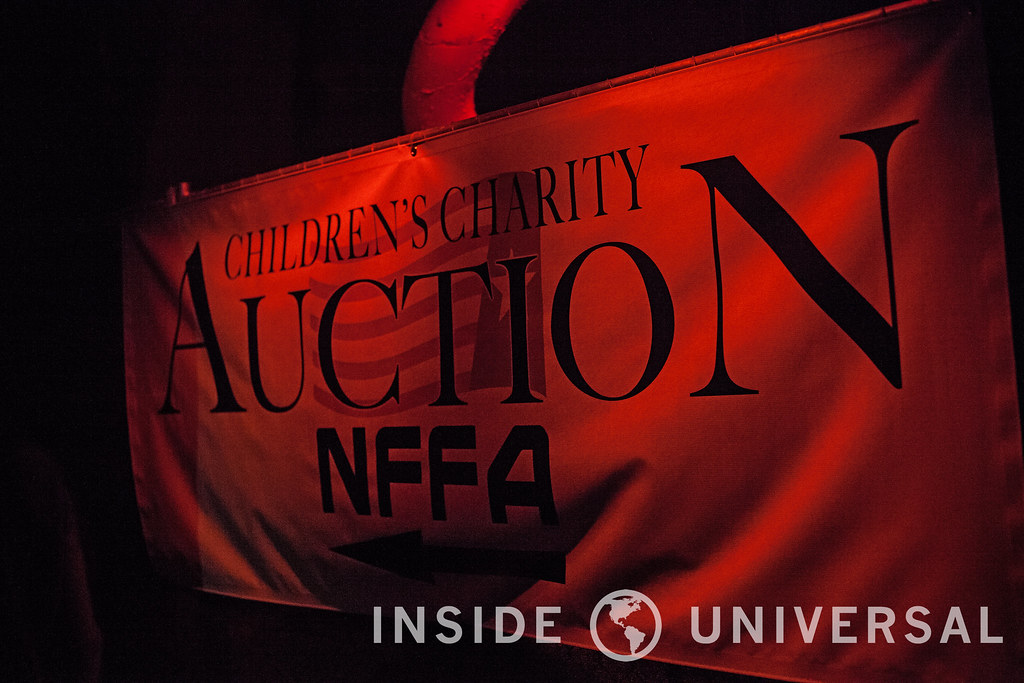 As you enter the Terror Tram area, you’re greeted by a pleasant Purge Party host whose job, it seems, is to make you feel comfortable and welcome. While you wait in line, they even have videos preparing you for the night’s festivities. Set up similarly to previous years’ Terror Tram, the tram picked us up at the normal loading station and drove us over to the Grinch set. Unlike the last few years, where we had videos advertising the new season of The Walking Dead, a brand new original video was created for the terror tram. It’s at this point where everything starts to go awry. As you get released at the Grinch sets, you enter into the Purge Party.

I won’t go into too much detail about what occurs because it is set up very similarly to previous years, except with the brand new Purge story. While The Walking Dead terror tram was consistently well done and the scareactors were always scary (and sometimes humorous), I was tired of seeing walkers every year. That’s why when it was announced that there would be an entirely new concept this year, I was thrilled!

While I understand that there is only so much you could do with that part of the back lot, I was a little bummed to find out that the set up was practically identical to how it has always been. Also, because there is such a large amount of guests in comparison to scareactors, the opportunity to be scared is brought down immensely. I was hoping that they would have somehow figured out a way to fix this. The main areas I found an issue with crowding were at both ends with the initial scareactors and with the chainsaw scareactors at the end. Since there was such a large crowd of people congregated at both areas, the scareactors got lost in the commotion.

With that said, I felt like the scareactors did a great job with the situation they had to work with. As we walked by the Bates Motel, the purge participants and the victims were both very convincing. The terrible screams of horror and pain created a very eerie environment. As we made our way through the wooded area and over to the plane crash site, those involved in the purge event were perfectly creepy. I don’t get creeped out easily, but they managed to make the hair on the back of my neck stand up. They made the atmosphere as such that I truly felt like I was prey being hunted for game. 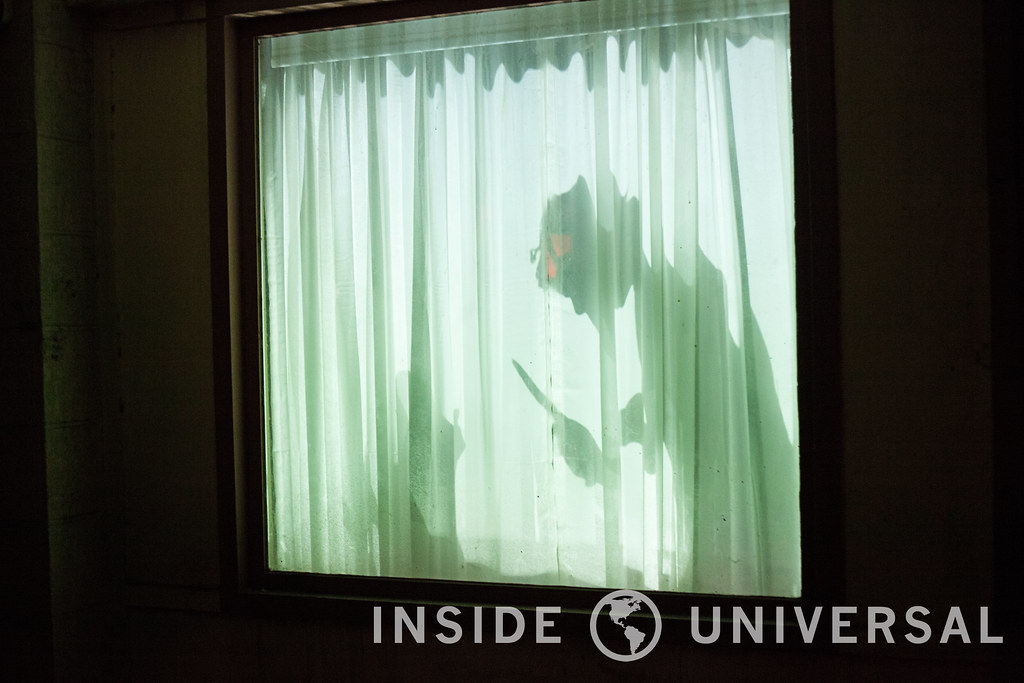 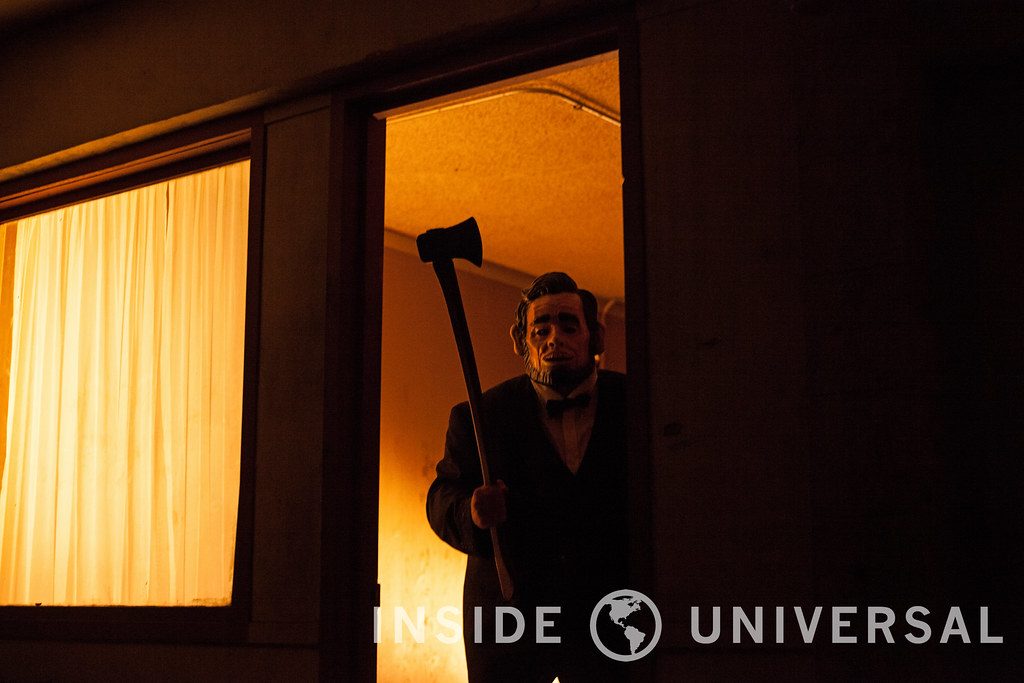 Overall, I thought that Terror Tram: Survive the Purge was very well done. It was a great change of pace from the last few years. I personally loved the execution of this new storyline. John Murdy and his team managed to incorporate various aspects from The Purge franchise to create a completely original storyline for guests to experience. To me, it’s this type of originality that sets Universal Studios Hollywood’s Halloween Horror Nights above the rest. While there are certain aspects that I wished could have been done differently, I think the team did a great job this year.

That does it for my review of this year’s Terror Tram: Survive the Purge! As always, thank you for making Inside Universal your number one source for all things Universal Studios Hollywood and Halloween Horror Nights. Stay tuned as we continue this series on this year’s event. Next up we’ll take a look into the paranormal with The Walking Dead: Wolves Not Far. 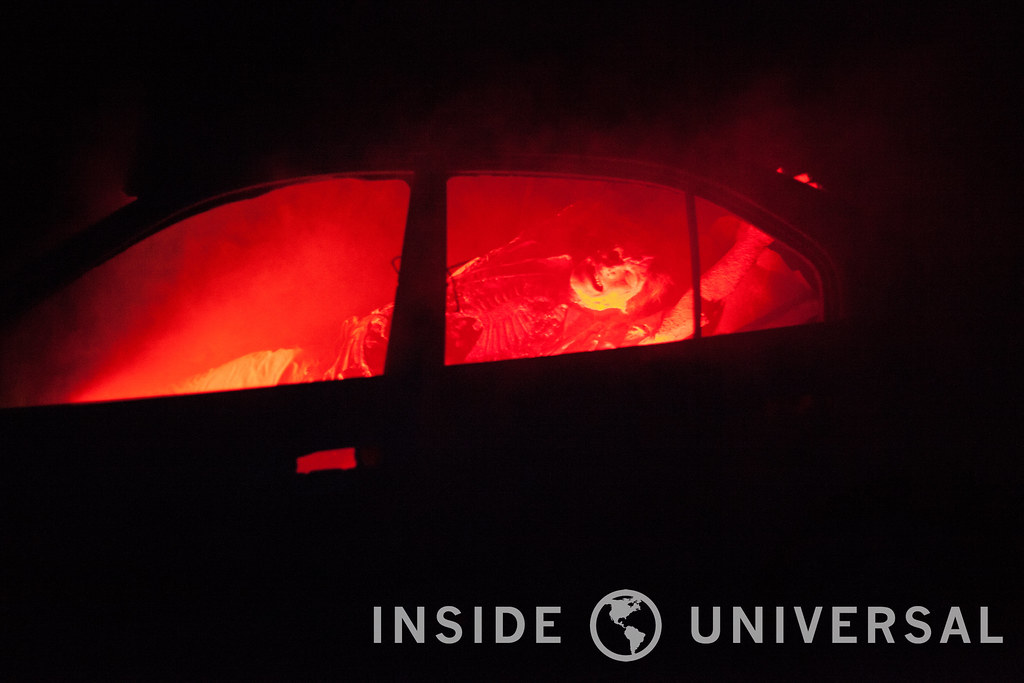 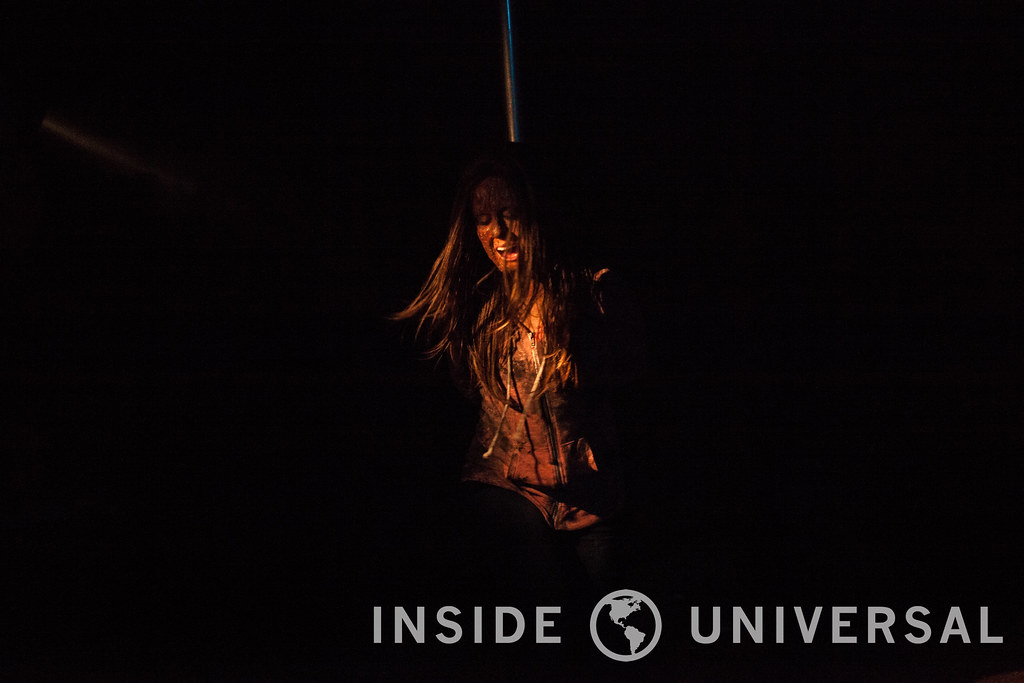