Over the last few weeks, rumors have surfaced that Diagon Alley may be on its way to Universal Studios Hollywood. Of course, the biggest question has been where – in other words, where is Diagon Alley going to be built on this already-constrained piece of property?

There have been three locations on the Universal property that have been wildly discussed that we’ll delineate and analyze below. Because of the size and scope of the land in question and the layout of Universal Studios Hollywood, only a few locations on the lot can handle another full sized land in the same scope and breath as the first iteration of Wizarding World that’s being completed today.

These locations include the WaterWorld arena, Falls Lake and surrounding infrastructure, and the Lower Lot studio area surrounding Revenge of the Mummy – The Ride.

According to articles by the L.A. Times and Screamscape, their sources have indicated that Diagon Alley would replace the twenty-year-old stunt show that has long been a fan-favorite.

While space is tight at the Hollywood park, a Diagon Alley expansion of Wizarding World is reportedly envisioned for the Waterworld stunt show arena location, according to a source who has seen the blueprints. – Los Angeles Times

WaterWorld is one of Universal’s longest running shows and although Action Horizons had recently revitalized the production with a revised plot and new stunts, the show is showing its age. Diagon Alley would give Universal a reason to demolish this venue and modernize this plot of land with new features.

How is Universal going to build a land that is 7 acres in size into a two-acre location? As we’ve modeled in the crude graphic below, the Escape from Gringotts show building roughly the same size of the WaterWorld set. The surrounding area – including CityWalk (and the newly refurnished Universal Studio Store), office space, and a newly renovated Take 5 employee cafeteria – would need undergo some significant renovations (if not complete demolitions) for this idea to be feasible. 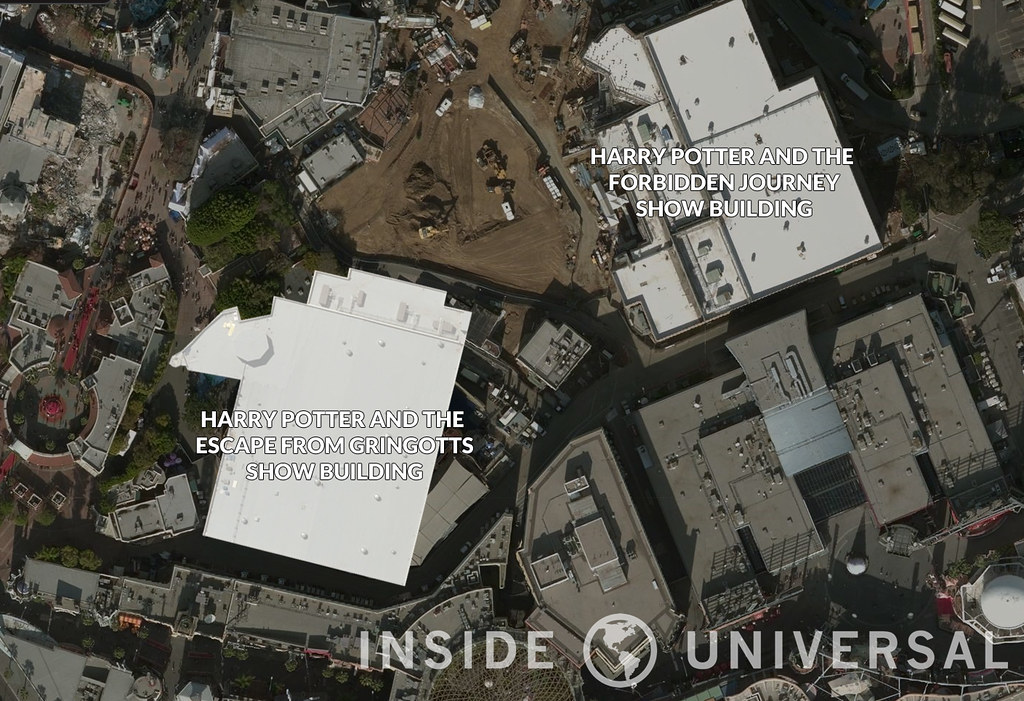 In addition, the newly refurbished Shrek 4D will need to undergo significant renovations (if not, again, complete demolition) for the land to fit. Universal is also refurbishing Hollywood Grill, which is adjacent to the WaterWorld plot. Add to the fact that an attraction near Universal’s entrance of this magnitude could potentially offset the balance between the Upper and Lower Lot, slamming Universal’s entryway.

So while we certainly cannot be definitive and say that Diagon Alley will not replace WaterWorld, the evidence behind it seems to say this is not likely to take place. The lingering question remains: what else besides WaterWorld must go, and why haven’t any indications been made that other closures will take place?

Of course, this is still assuming that Universal Studios Hollywood’s Diagon Alley expansion will include Escape from Gringotts alongside most of the stores and restaurants introduced in Florida’s original version. A truncated Diagon Alley may very well fit into WaterWorld’s existing footprint, but it’s important to be mindful of the size and scope of the existing Gringotts show building and its relation to the current footprint of WaterWorld.

An expansion for Diagon Alley has also been rumored for Falls Lake. Located in the backlot portion of the Universal Lot with the world’s largest blue screen, this area is nestled between Fast and Furious: Supercharged and the War of the Worlds set.

The Falls Lake location would provide new space for the theme park to grow without the hurdle of expanding within existing theme park boundaries. This patch of land combined with the War of the Worlds set would give more than enough room for Diagon Alley to be built. This option would also allow for the popular Hogwarts Express to transport guests from Hogsmeade to Diagon Alley.

There are several logistical problems with this option along with some several unhappy surrounding neighborhoods. Let’s start with logistics: the distance between Diagon Alley and the rest of the theme park would be drastic. Between the two is the Studio Tour loading dock along with the Fast and Furious: Supercharged show building. In short, how would guests transverse from Hogsmeade to Diagon Alley without taking the Hogwarts Express? 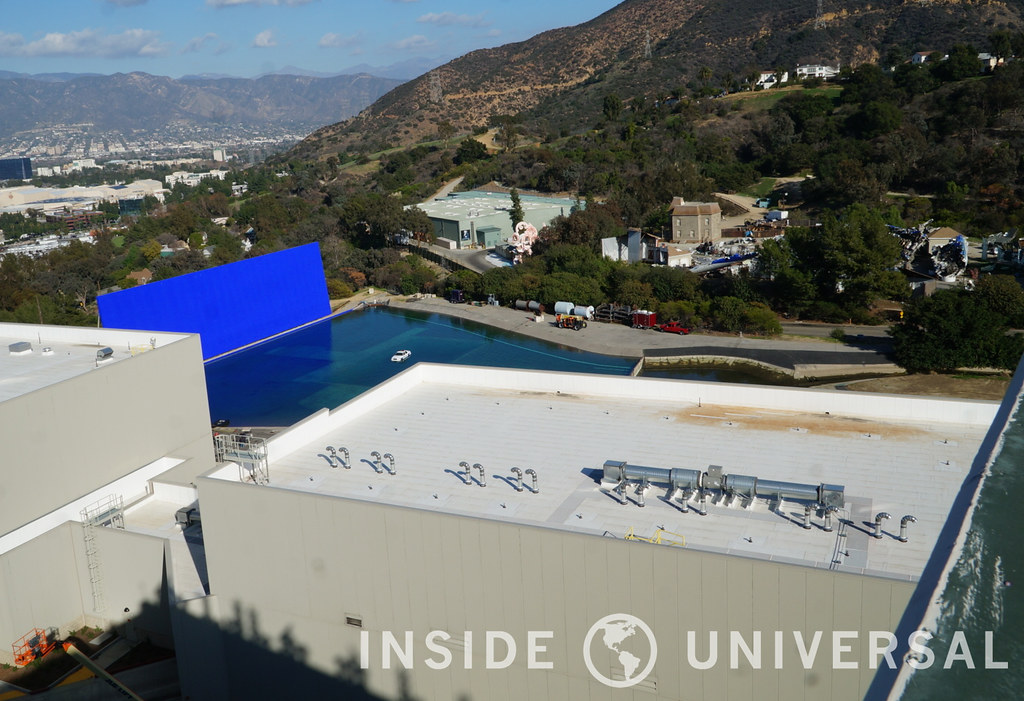 For one, the walk to Diagon Alley would be quite strenuous for guests especially those with strollers and guests with disabilities. You then run into the issue of the Studio Tour tram leaving the Fast and Furious attraction. The logistics of getting guests safely to the land without being hit by a tram would be quite difficult and the Studio Tour will have to take a lengthy alternative route to exit the new animation.

Perhaps even bigger issues than the logistics of the land would be that of the neighbors located near the hill. For years, noise complaints have created a contentious relationship between Universal and the neighbors surrounding the hill. WaterWorld for years has received noise complaints from the surrounding community, and the show (along with CityWalk Hollywood) have been burdened with additional noise restrictions in the wake of the NBCUniversal Evolution. Wouldn’t a land filled with thousands of guests each day create an even bigger issue of sound pollution?

Side note: some of our community members over at USHForums.com have also proposed that the area surrounding the Studio Tour loading station could eventually become the home to Diagon Alley. This would mitigate the transportation issue outlined above, but it provide the question of where the new Studio Tour loading dock would go, and how Universal would incorporate the new Studio Tour entrance into Diagon Alley. We encourage you to visit the forums to see some hypothetical layouts and make your own informed decision.

Revenge of the Mummy – The Ride and the surrounding soundstages

It just so happens that Diagon Alley’s seven acres fits this portion of the Lower Lot with one caveat: the land would have to be a mirrored version of its Florida peer and Revenge of the Mummy would need to be demolished. This would also help mitigate traffic congestion on the Upper Lot, allowing the park to balance out traffic between the two sections. 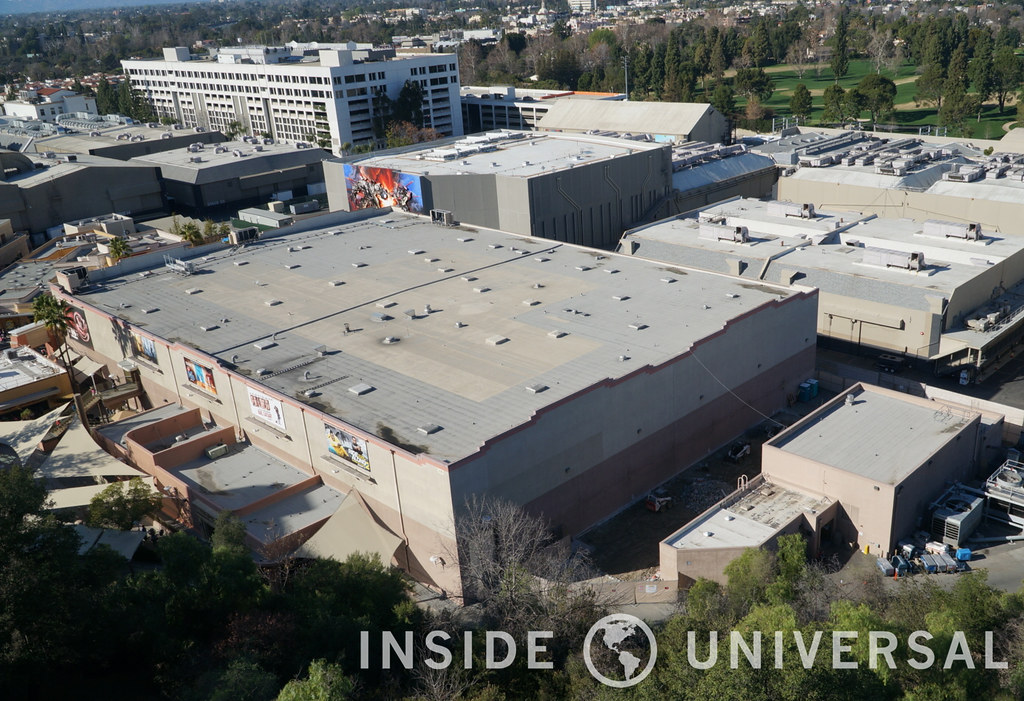 The Lower Lot expansion would also allow Universal to move soundstages to the quieter areas of the property, perhaps killing two birds with one stone. Not only will the studio be able to house soundstages in quieter portions of the property, but the sound proof nature of soundstages means that most noise complaints from studio activity could be mitigated. Aesthetic intrusion notwithstanding, relocating soundstages closer to the surrounding neighborhoods could create less noise pollution.

This entire development depends on how heavily Universal wants the Hollywood version to include the Hogwarts Express. Because of how the park is divided and the location in question is surrounded by a massive hill, it could be difficult to envision how Universal would be able to construct the Hogwarts Express train ride without doing some major restructuring to the adjacent hill or rerouting the tram path.

Another potential issue would be Universal’s willingness to tear down soundstages for theme park growth. With that in mind, the firm has shown that they are willing to demolish studio property if need be in favor of theme park space. A Lower Lot expansion would require the demolition of a significant amount of soundstages surrounding Revenge of the Mummy, so the question remains: does NBCUniversal believe that the Lower Lot is the most suitable location for filmmaking on the property?

Rumors – everyone loves them. But specificity and context is key, coupled with a little common sense. If one throws the notion that Diagon Alley will indeed replace WaterWorld, it’s essential that they provide some form of context to make the idea somewhat plausible to discuss. As we stated earlier, WaterWorld occupies two acres of land while Diagon Alley encompasses a total of seven.

We have to reiterate: Florida’s version of Diagon Alley is larger than Hollywood’s installation of Hogsmeade. Logic would say that the WaterWorld location doesn’t work unless Universal removes portions of CityWalk, Take 5 or Shrek 4D if Hogsmeade were to remain some untouched.

It is very well possible that Universal Studios Hollywood will receive a truncated experience, but no mention of that notion has been included in any significant discussions.

So where does this leave us?

When examining the three locations: one seems too small, one seems too noisy and the third, well…time will tell. This topic has brought out the imagination in a lot of people and has become an interesting topic among the theme park community. One thing’s for certain – fans of Universal are in for some interesting developments in the coming years.