This year’s merchandise sees the return of the “rockin” sugar-skull skeleton. Prices for beads did go up, as last year beads were sold as “3 for $10”. This year, it’s $4 for each set of beads. Annual passholders get an exclusive bead, if you’re interested, sold at $11.95. T-shirts, tanks, masks are also part of the merch line-up. Check out some images of this year’s merch below:

Due to the rain, many of the characters -such as the stilt-walkers – from the parade that normally meet guests beforehand were not out. The local New Orleans band also were not able to perform their set. Even though it was great night, many of the usual activities and features that are accustomed to Mardi Gras weren’t experienced due to the weather.

The French Quarter Courtyard still has many of your favorite food and drink as year’s past, such as – Jambalaya, Andouille Sausage, Red Beans & Rice, and Gumbo. If you want to play it on the safe side, they do offer Pizza, Chicken Tenders & Wings, and Twisted Taters (a spiral cut, deep fried potato on a stick). Voodoo Juice makes it return as the signature drink of the event as well. New this year is the Mardi Gras Bock from the Abita Brewing Co. It is not specifically brewed for the event, but is a seasonal beer offered by Abita.

This year, the Mardi Gras parade features 5 new floats, including 4 completely new themed floats, which are the Venetian Carnival, Oktoberfest, 4th of July and Rio de Janeiro Carnival. The other new float was a redesign of the traditional King & Queen float.

Again, due to the weather, stilt-walkers were not part of the parade. In addition, the parade didn’t make it’s 2 scheduled stops to release confetti. People were finding shelter under awnings, or nearby stores to avoid the weather while waiting for the parade to start. As you can see from the pictures below, it started to rain quite heavily when the parade got underway. Regardless, the event still goes on rain or shine, and guests were willing to get a little wet to enjoy their nights.

The concert that night was performed by Hunter Hayes. At this point, we had decided we had enough of the rain; however many fans still weren’t disuaded and decided to wait. The Music Plaza Stage still had packed crowds. 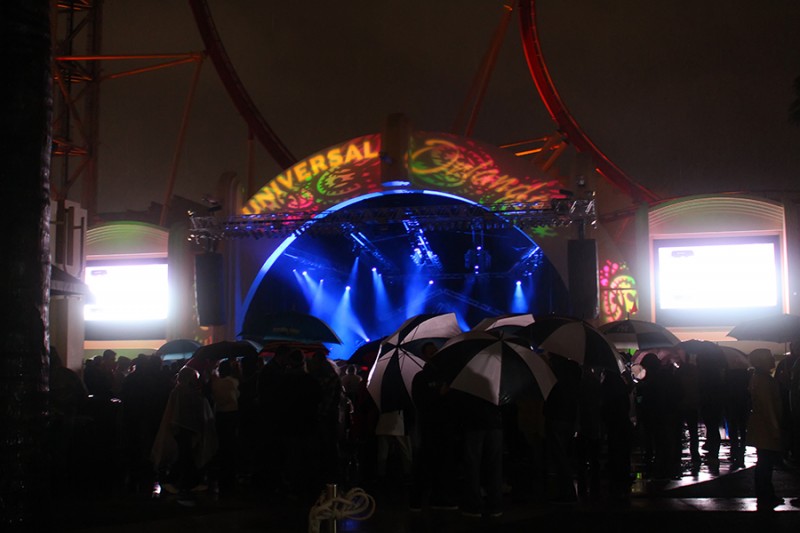 Remember, Mardi Gras is included with theme park admission. If you’re planning on heading out this year, we’ve prepared a guide that offers some tips and planning advice; as well as more details on this year’s acts and times. Hopefully the next Mardi Gras weekend is a lot more dry!