The Walking Dead Attraction is set to open on July 4 at Universal Studios Hollywood. If you’re itching to know what’s inside, you’re in the right place. We had the opportunity to get a sneak peak of the attraction before it opens to the public, and now we’re going to share the gory details with you.

Of course, this article will contain spoilers, so look away now if you’re looking to experience the attraction spoiler-free! 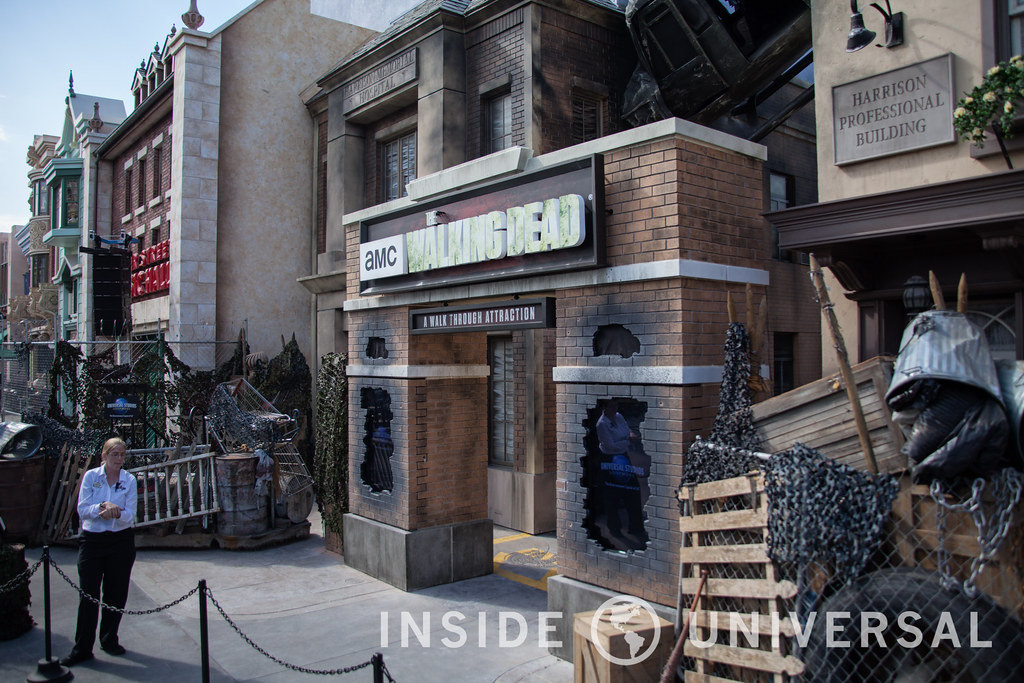 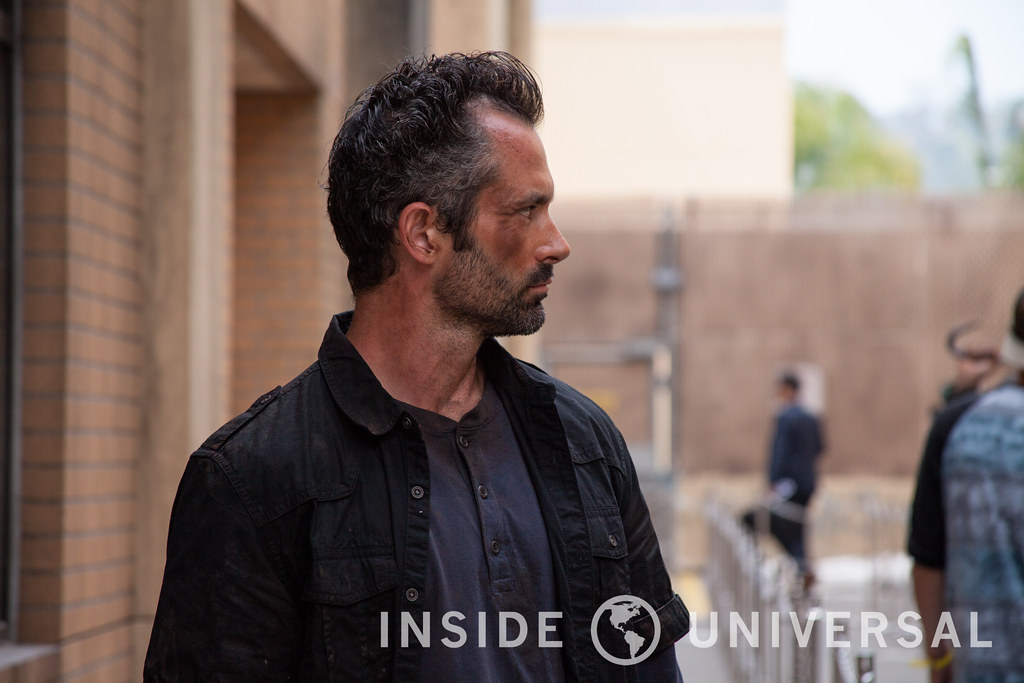 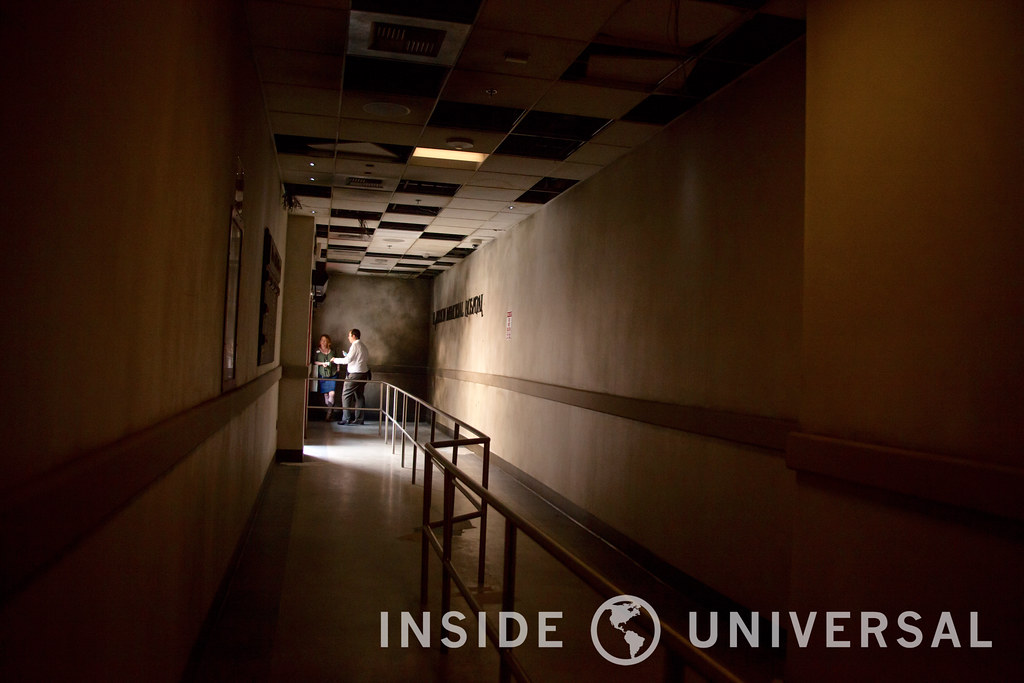 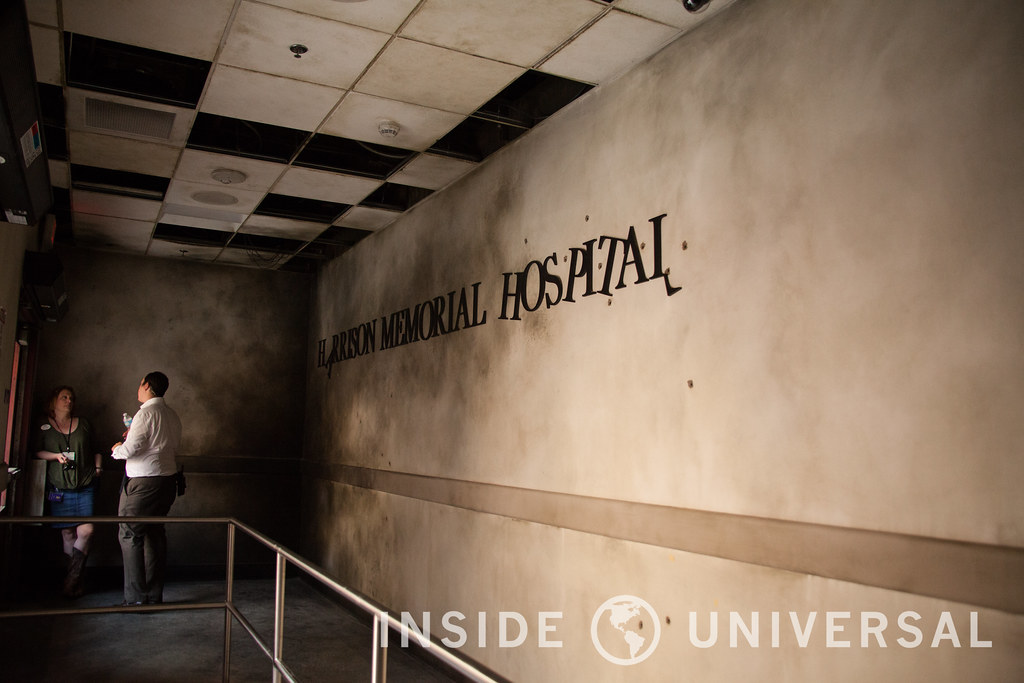 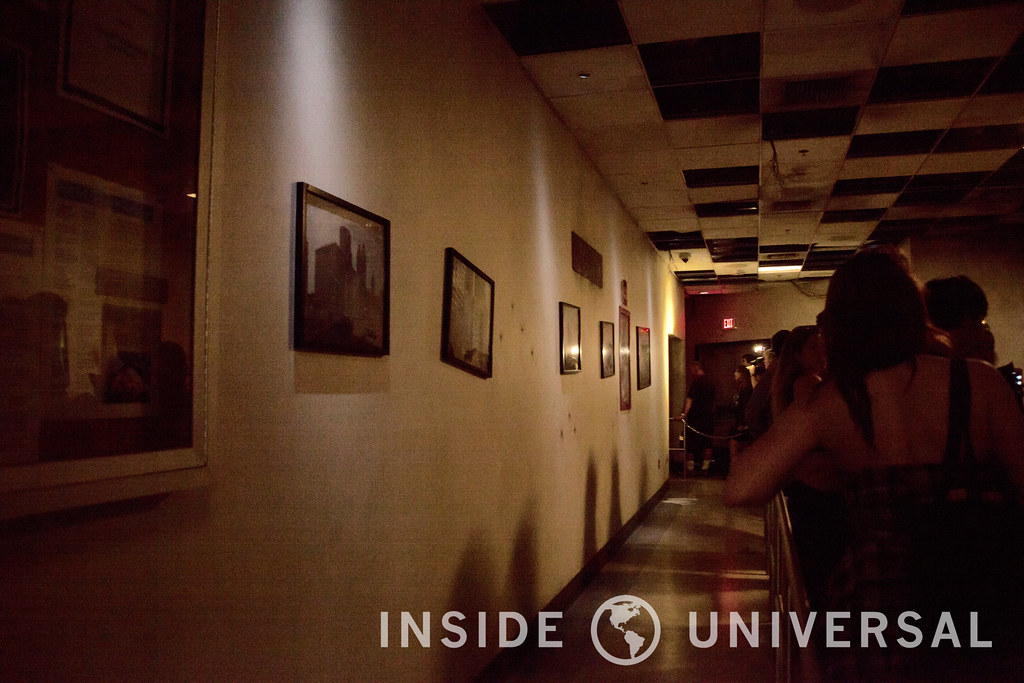 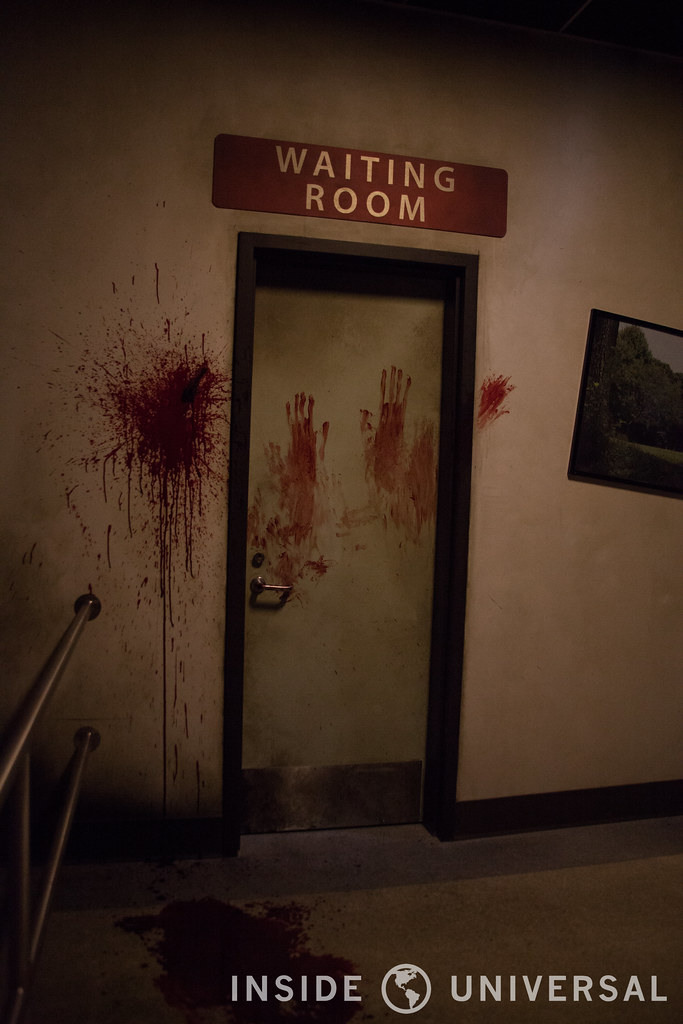 As we walk through the arches and into the beginning of the queue area, it’s clear we are about to visit the exact same hospital that Rick Grimes found himself stranded in when he wakes up from a coma in the first season of the television show. Harrison Memorial Hospital now features the battle scars of a war between man and walker, with bullet holes lining the walls, blood marks splattered on the floor, and lights flickering throughout the building. 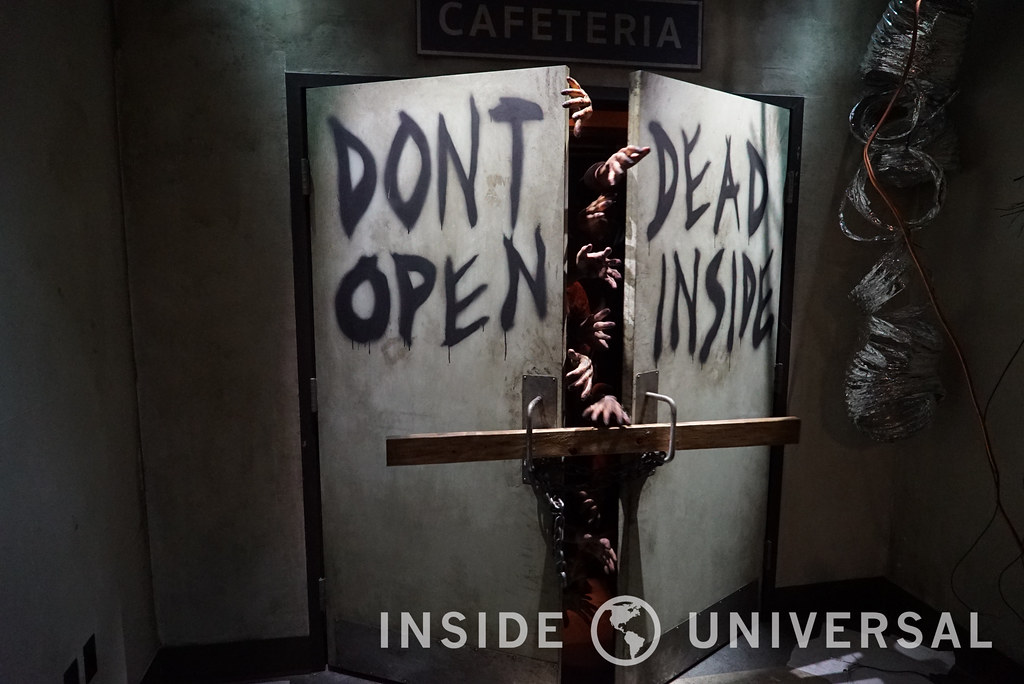 As we round the corner into the employee break room, we find ourselves situated directly in front of the infamous “Dead Inside” doors that have become synonymous with the television show. The door rattles and bulges as the walkers within desperately try to take a bite out of guests passing by. A wooden plank and a few flimsy chains is all that remains between you and a hoard of walkers behind the straining doors. 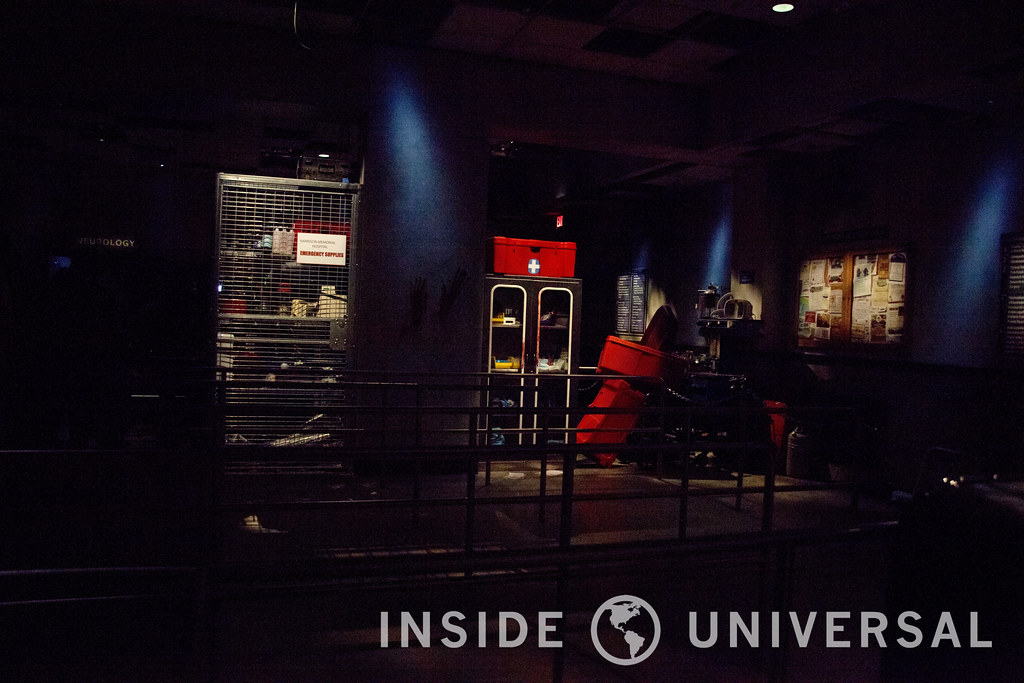 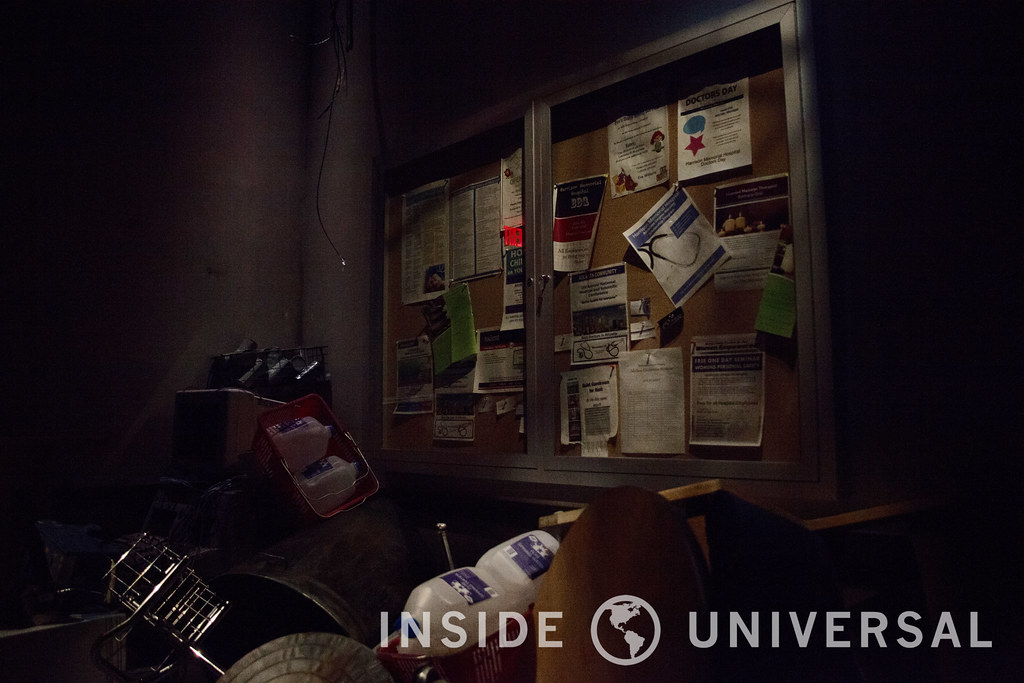 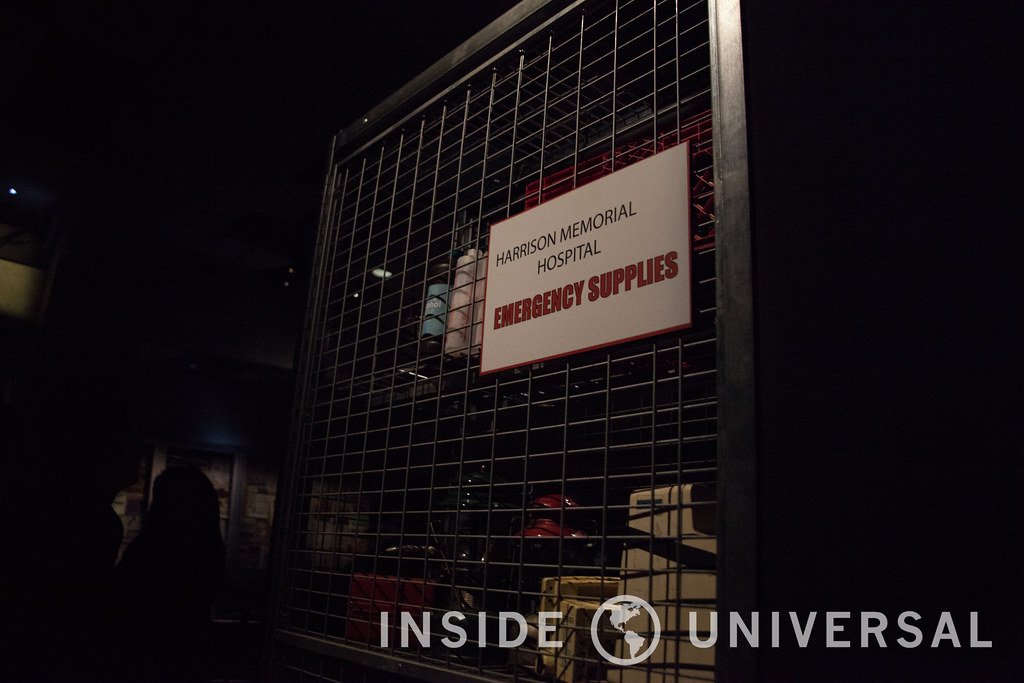 The employee break room opens up, and we find ourselves in the middle of a makeshift barricade. Vending machines, chairs, and just about anything survivors could find are stacked up against doorways and walls in a futile attempt to survive the zombie apocalypse. In this room, we hear a voice on a nearby radio urging us to seek shelter at the prison. It’s not quite clear if our new friend actually has our best interests in mind, but we have no choice but to follow his advice in this hostile and unfamiliar environment. 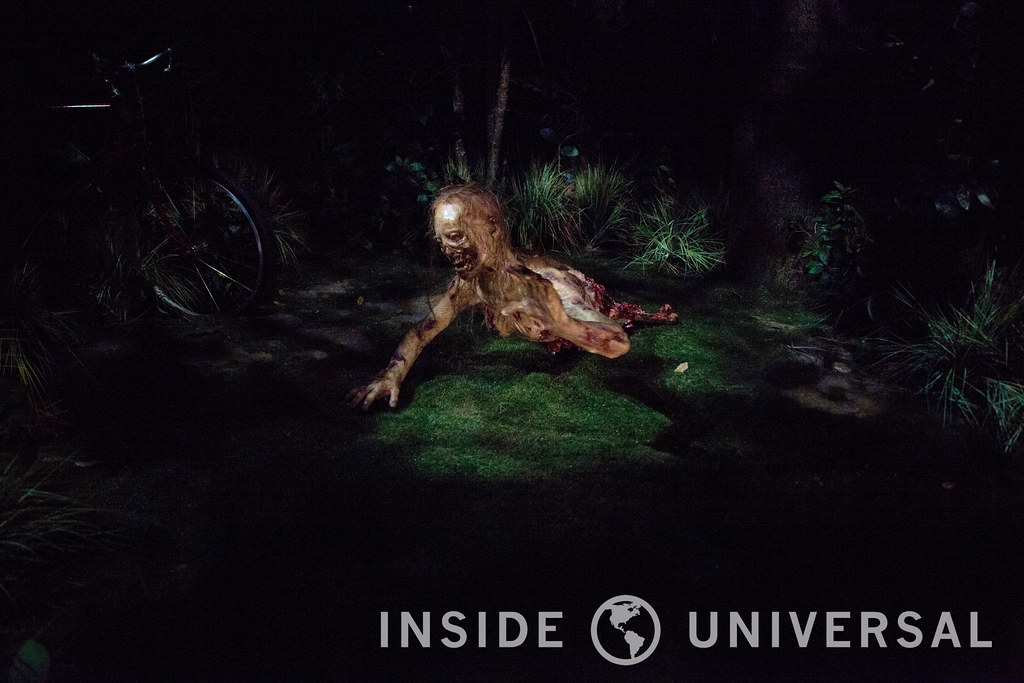 This is where the queue ends and the actual attraction begins. One of the first walkers we see is the fan-favorite Bicycle Girl – the first walker that Rick Grimes comes in contact with on the television show. She crawls along the ground and reaches out to us, growling all the while. 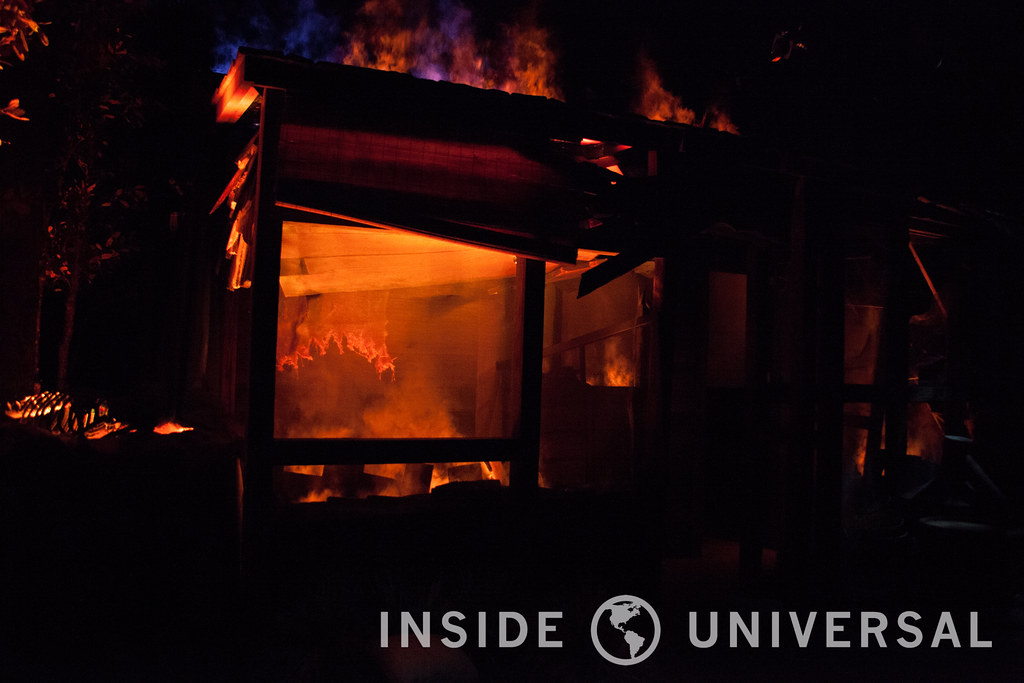 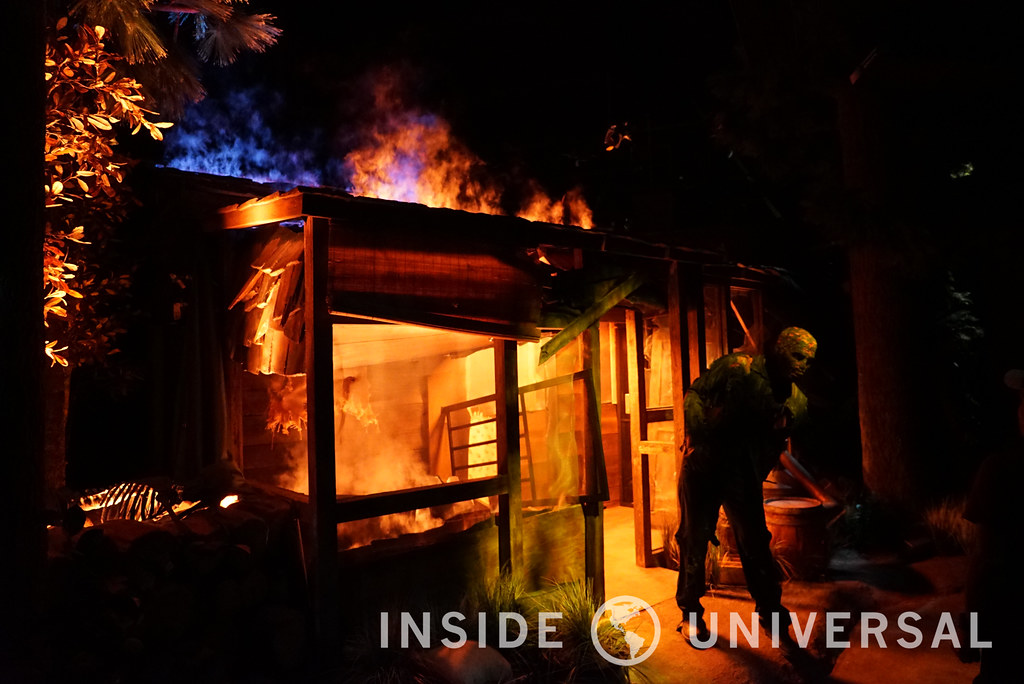 As we round the corner, we come across the moonshine cabin that Daryl and Beth burned down during season four of the show. Flames roar out from all sides of the cabin as a smoldering walker leaps out from the ashes. It’s truly an astonishing effect. There are heat lamps hung on the ceiling to give guests the feeling that they are really standing quite close to a very dangerous inferno. 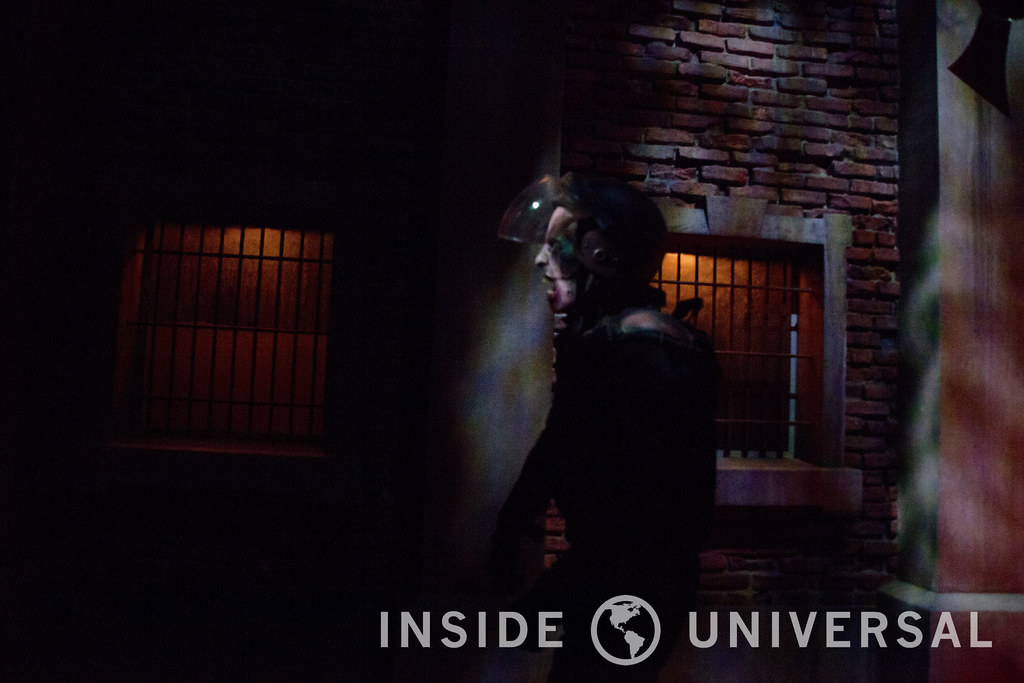 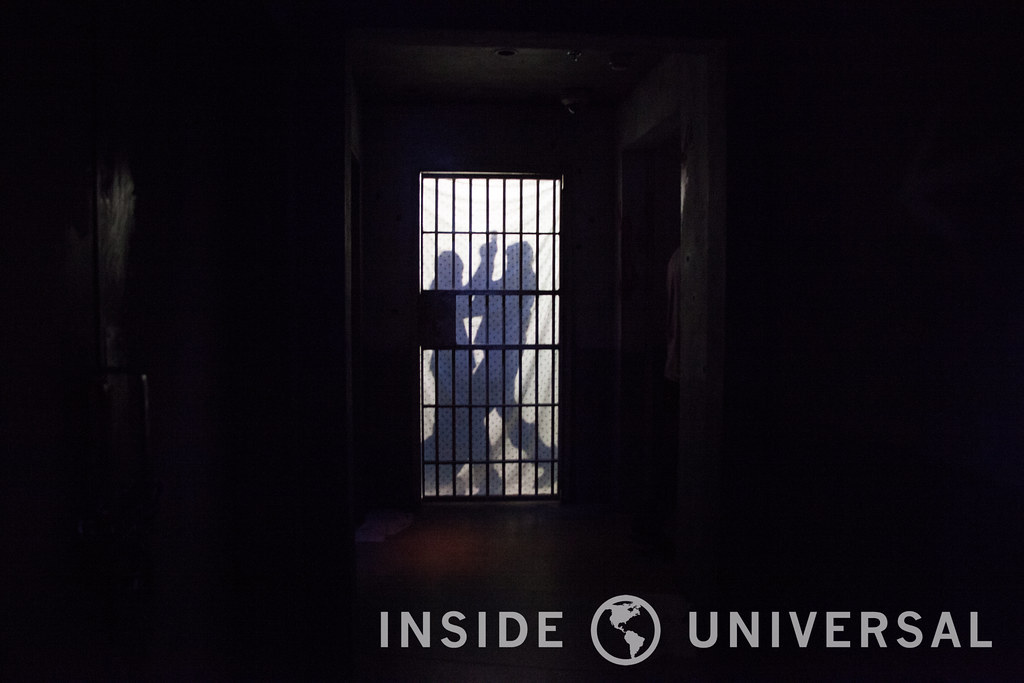 We finally make it to the prison that our survivor-friend mentioned back in the hospital break room. It’s the same prison that was featured in season 3 of the show. It’s clear when we get there that this is not a safe place. As we head inside, we witness unfortunate survivors being attacked by an angry horde of walkers through shadowy silhouettes splayed on bed sheets. 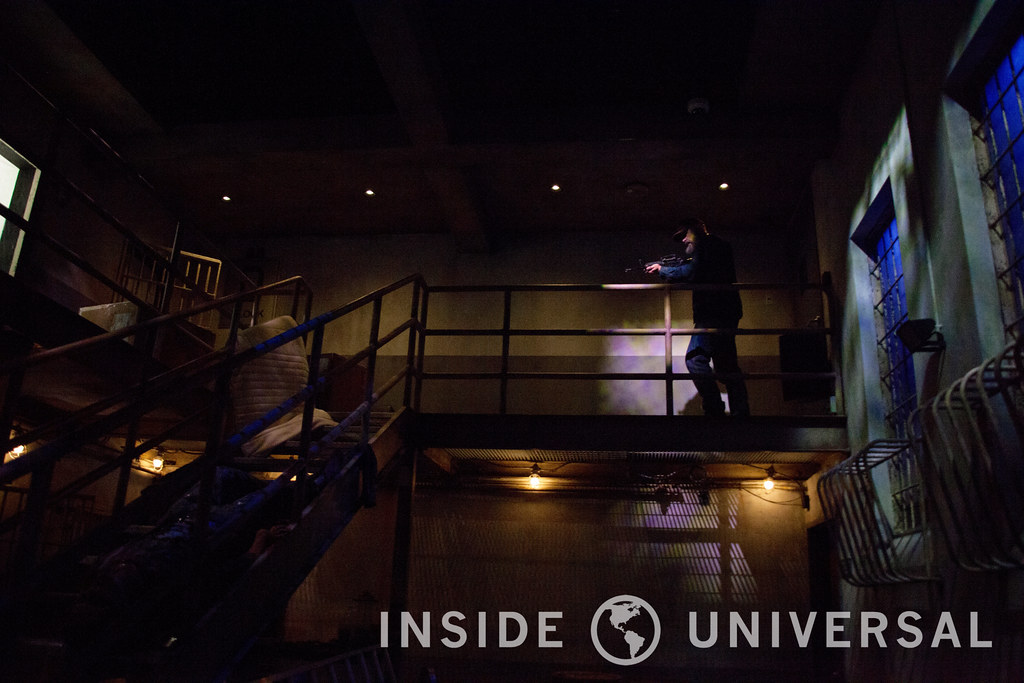 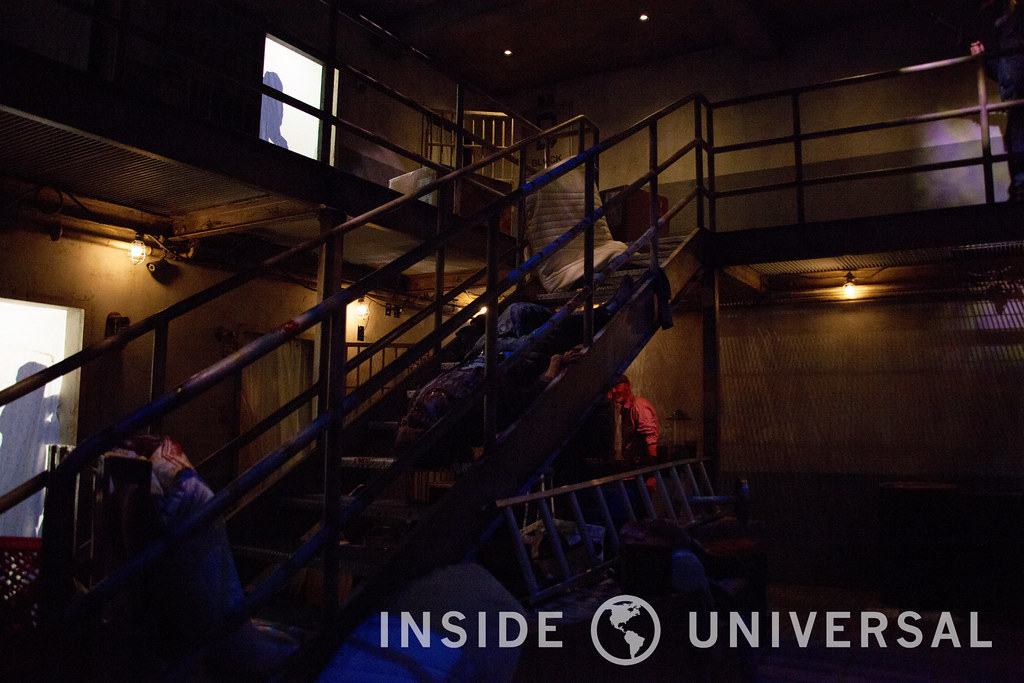 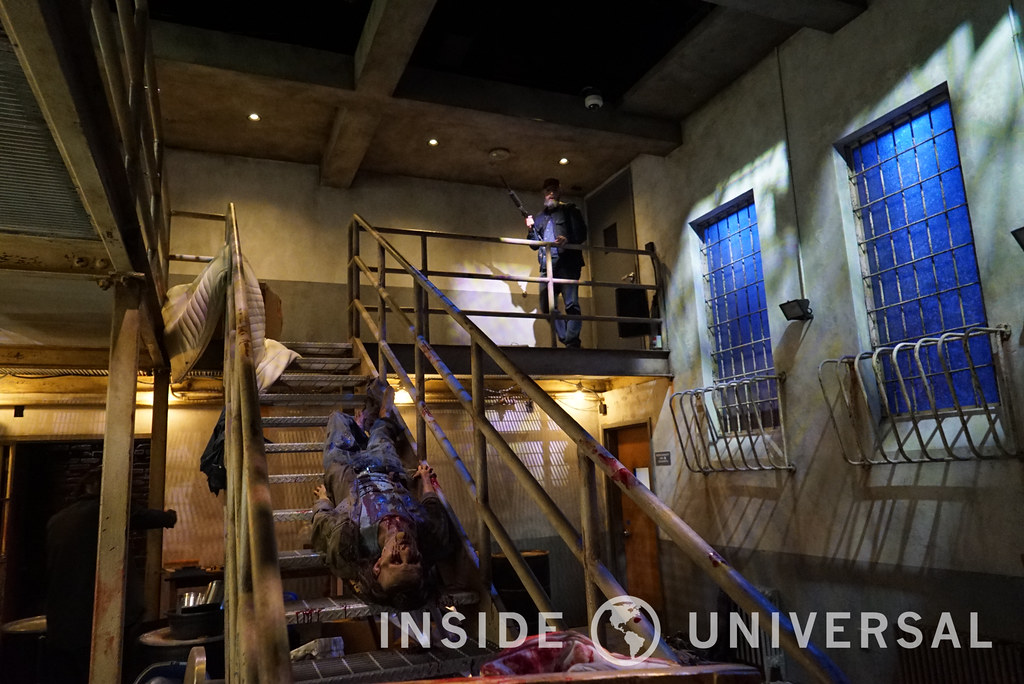 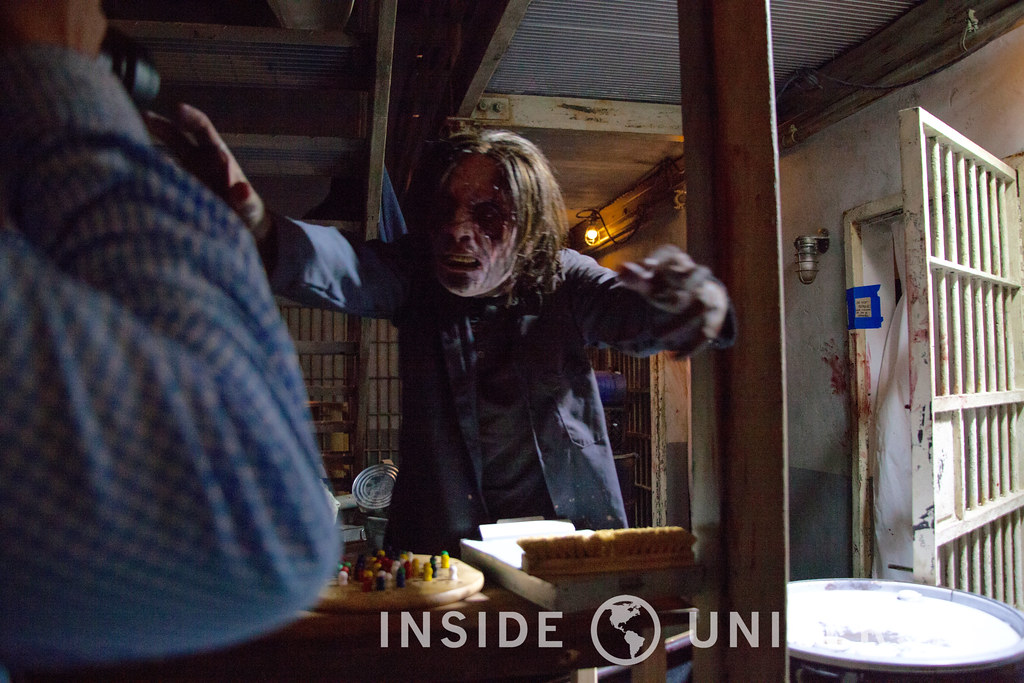 We keep moving forward and are greeted by a fellow survivor with a rifle telling us to to run as he opens fire on the walkers ripping his friends apart. A walker bursts out of a cell and reaches toward guests while they flee for their lives. 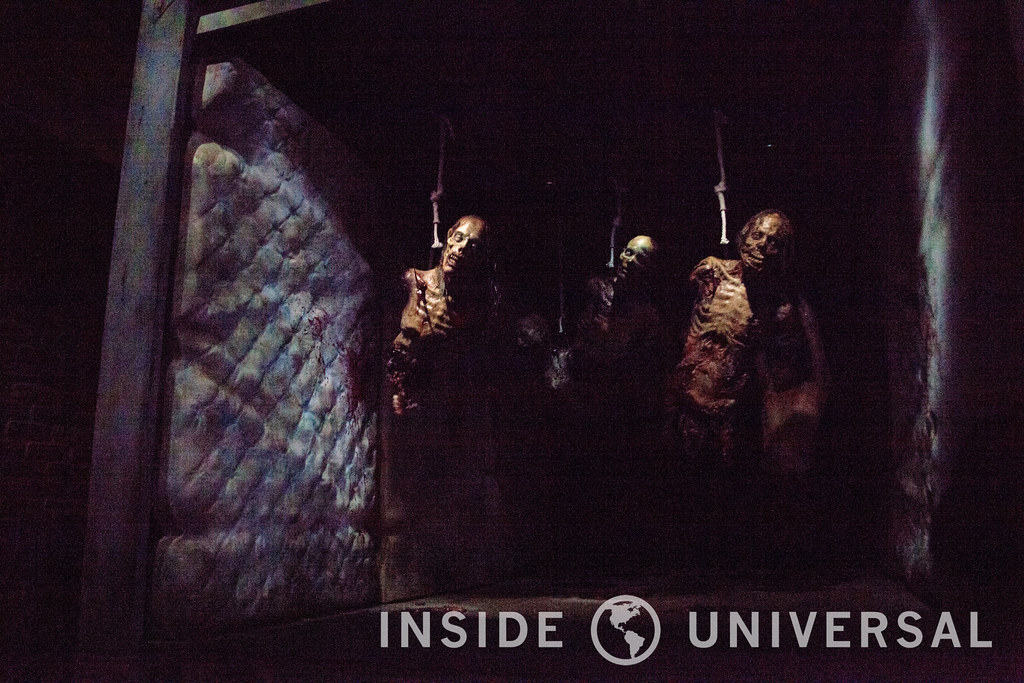 As we escape the walker herd in the prison, we come to the end of our journey. It’s apparent now that the entire plot was a setup orchestrated by The Saviors (a rowdy gang of survivors that were first introduced in season six), leading us into an ambush at the Del Arno canned food plant. The trucks are filled with hanging walker torsos, chomping their teeth at us helplessly as we walk by. A Savior with a shotgun takes aim at walkers as they charge at us, knocking them to the ground. 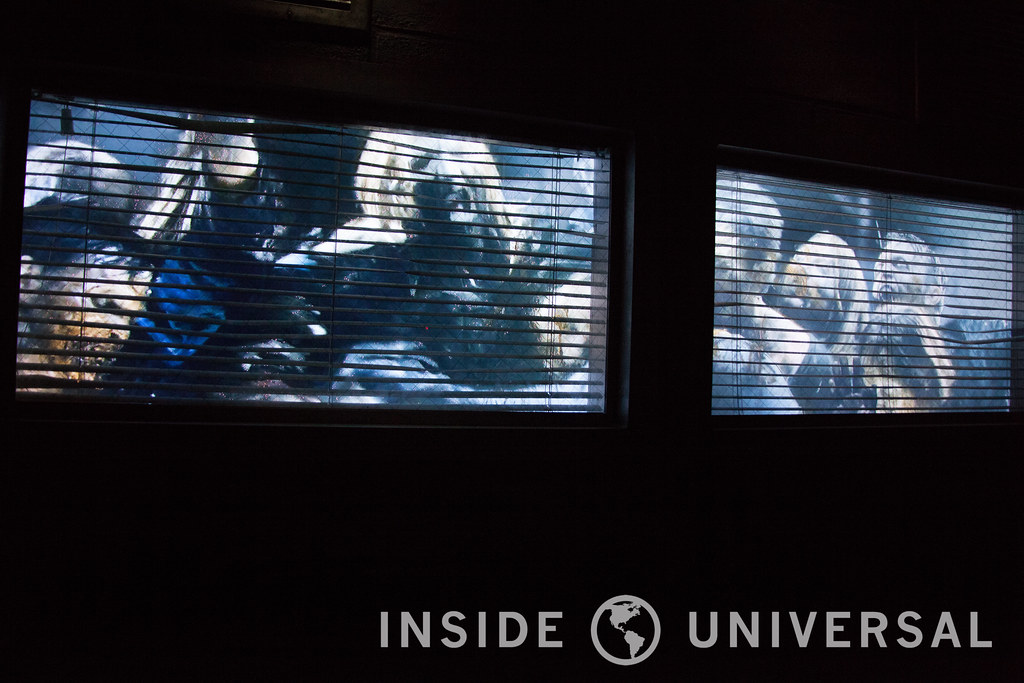 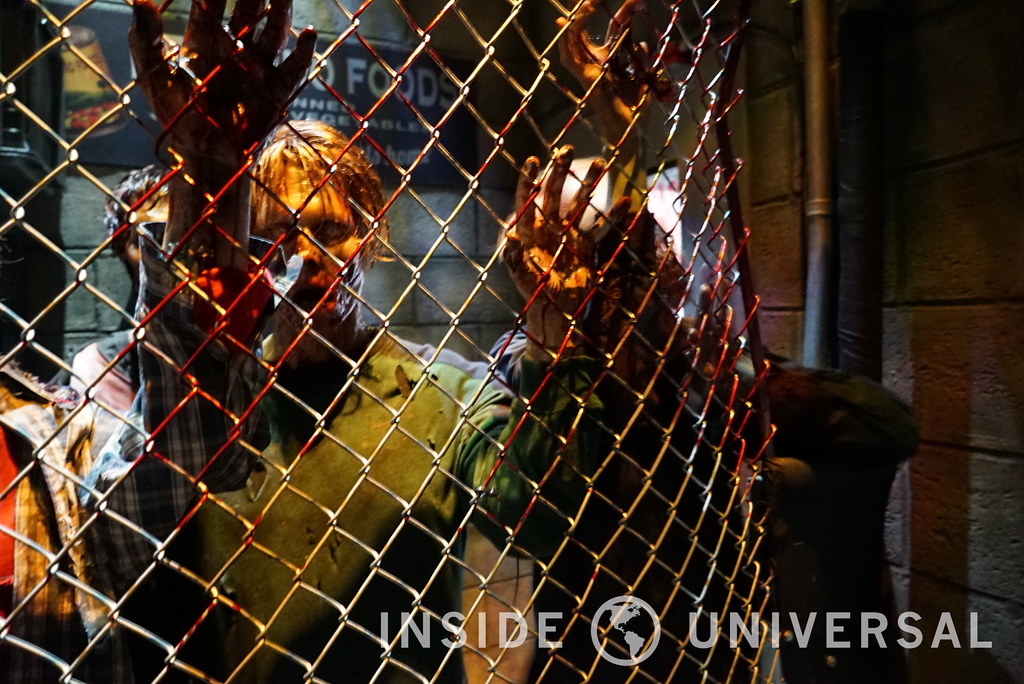 As we head into the last area of the attraction, we find ourselves surrounded by walkers on all sides – grasping at us through holes in chain link fences, attempting to feed on our bodies. Strobe lights give a disorienting effect, making our precarious scenario all-the-more real. As we dart through the canned food warehouse, we begin to see daylight signaling safety. We have escaped the zombie apocalypse and have lived to tell the tale.