In a departure from their annual reveal events at Halloween conventions, John Murdy and Chris Williams took the stage at Midsummer Scream to go in-depth about the history and the future of Halloween Horror Nights.

Traditionally, Murdy and Williams’ presentations would be shrouded in absolute mystery, featuring a special guest and – if any – a top-secret reveal. However, this year is different. With four big slasher monsters that have been a part of the horror culture for decades now on Universal’s roster for this year’s event, Halloween Horror Nights 2016 featured a cohesive lineup of classic Halloween characters. Freddy Kreuger, Jason Vorhees, Leatherface and Michael Myers were the four main characters discussed at length at Midsummer Scream, a new annual Halloween event created by Theme Park Adventure and Creepy LA.

Before Murdy got into the characters or mazes themselves, he talked about Halloween Horror Nights’ massive reboot in 2006. Universal Studios Hollywood had previously abandoned the annual Halloween event in the early 2000s. For 2007, the use of high-profile intellectual properties for a maze was considered unprecedented, where the rights holder to the films were most used to hearing people pitching their characters for a ride or an attraction rather than in a temporary Halloween event. The clout of Universal essentially creating the horror genre was key in getting the necessary trust to make these immersive mazes a reality.

First discussed was Nightmare on Elm Street. With the previous Nightmare-inspired mazes, Murdy covered not only the facades and mazes that were changed, but also how they had to create much of the effects we now take for granted – specifically for the nightmare scenes where they needed the effect of a latex wall with people trying to tear themselves out.

This time, however, there is no solo Freddy maze at this year’s event. Instead, as has been common in recent use, Freddy will now be engaging with Jason of the Friday the 13th films.

Friday the 13th had been previously featured 3 times before at Halloween Horror Nights. This time, Murdy took the time to discuss the effects they created to make Jason’s kill scenes as intense and varied as possible. These effects ranged from magnetically attached severed heads on scareactors to pneumatic-tubing that would split-open a wound as the cleaver would come down. Some of the effects have improved over the years, like the severed-body-on-a-table prop, while others would fail, such as the pneumatic wound-splitting effect which didn’t reset quickly enough as guests passed through.

That being said, when effects do work out well, it’s great and it moves the industry forward. Learning from everything they’ve done in the past is a key part of Murdy and Williams’ success in the last 11 years.

But this means the Freddy vs Jason maze will involve something possibly not seen before in a maze at Universal Studios Hollywood. Because it would be unfair to have one of the two talents win decisively over the other, the ending of this new experience will change based on whoever is operating the final scene. That means multiple endings can be created to wrap up the experience without resorting to a static scene and outcome.

Next up came time for Leatherface and the Texas Chainsaw Massacre series. This was a chance for Murdy to discuss the set pieces used in the event and how they painstakingly tried to recreate scenes from the movie. Chris Williams discussed his large collection of wallpaper patterns – small details that audiences might not ever catch, but end up completing the scene as an immersive, holistic experience.

While Universal can re-use properties from year to year, they’ve always attempted to make each entry fresh take with as many new scenes and stories as possible. This year it was revealed that The Texas Chainsaw Massacre story would actually be an interquel that takes place 5 years after the original, and 8 years before the original sequel. The idea was to create a maze experience that would act as a midway point between the two films. Translation: guests will be transported to the humble beginnings of a gas station that became a full fledged barbecue restaurant, with ChopTop’s return from Vietnam being a key point in this year’s maze.

Murdy and Williams were especially proud of being able to essentially create a sequel that never existed, allowing a certain degree of freedom and creativity while still rewarding fans who are familiar with the franchise.

Finally, wrapping up the big four was the Halloween franchise. Michael Myers is a more recent addition, comparatively speaking, to the Horror Nights maze lineup, but the franchise has been rooted in deep success for many years. Murdy specifically mentioned how the return of Halloween was in large part due to the fact that the most recent Halloween maze was the top guest rated maze of all time, by a large margin.

If you paid attention to our Horror Nights articles last year, you may have noticed that many referred to the Halloween maze as “The Ghost of Michael Myers” but that subtitle mysteriously vanished right before the start of the event. Murdy explained that that while Michael Myers is supernatural, he wasn’t a ghost, and the subtitle could be confusing for guests, paving the way for a last minute name change. 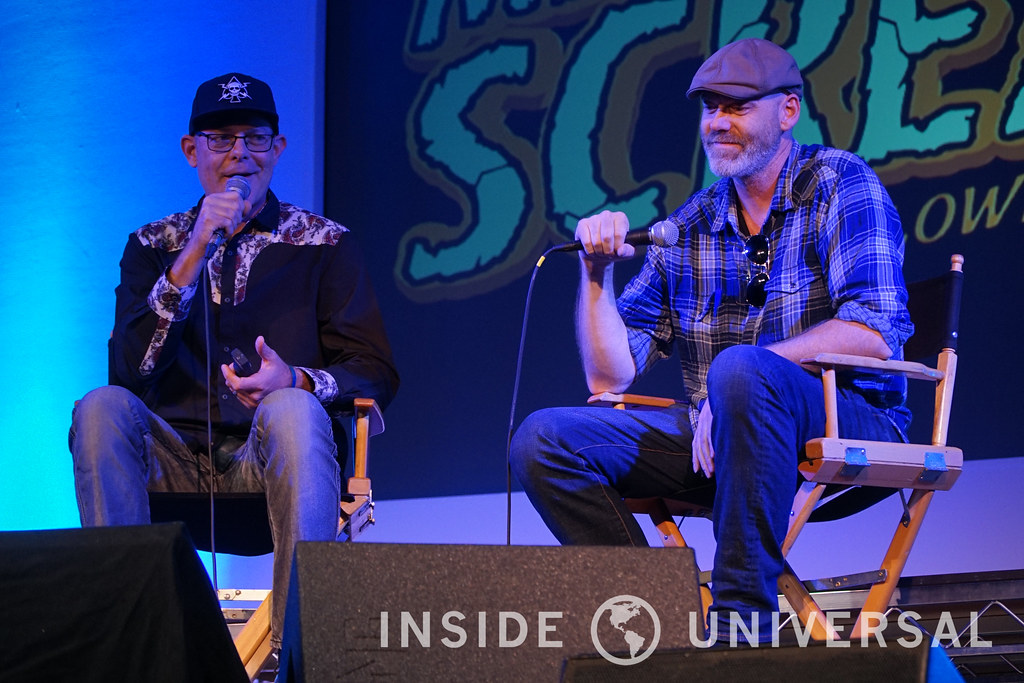 Given how Halloween II follows directly after the end of the first film, this year’s new maze will work in the same vein, following where the first film left off. Additionally, variety is the spice of life (and death), so they’re focusing on all the different murder weapons used in the film, making sure that each death isn’t simply a knife stabbing, but possibly a syringe jab or any number of other weapons used in the film.

Because Michael Myers is seemingly immortal, the ending to the previous Halloween maze was a mirror maze of Michael Myers, driving home the notion that you can’t kill the boogeyman. Without revealing the gimmick this year, Murdy explained that the same idea would be present in the ending of this year’s experience, but in a different format. 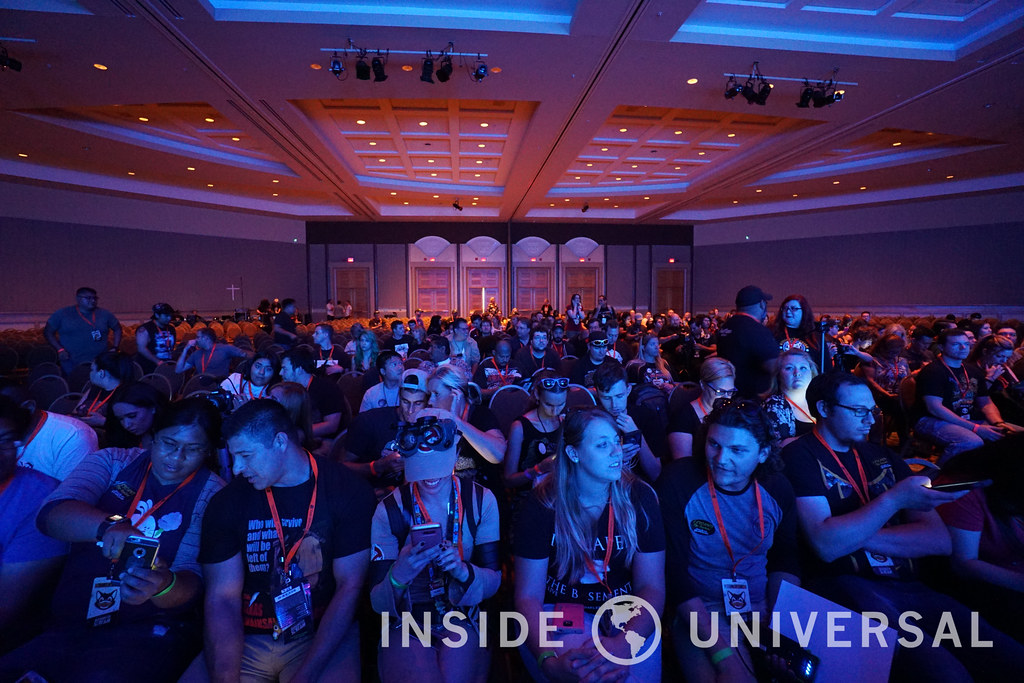 After concluding the discussion of these mazes, Murdy came back around to discussing the Exorcist maze and the difficulties surrounding its development. Not only have they been attempting to secure the license for many years, but they also needed to find a way to make a compelling walk-through of a film that takes place primarily in a single room. Given the paranormal activities that occur throughout the film, Murdy and Williams will be making heavy use of “black outs,” or behind-the-scenes scareactors used to animate props and work out of view of the guests to enhance the scenes. Murdy went into great detail regarding the black outs performers, noting that this year’s Exorcist maze will have more of these types of scareactors than any other maze, ever.

Finally, after wrapping up the details of all the upcoming mazes, and their long history, John Murdy and Chris Williams noted that more would be announced in the coming weeks. It’s worth mentioning that no scare zones, Terror Tram themes, or show details have been released yet, in addition to specific event dates, ticket prices or what days that Platinum passes will be able to visit.

All of those and more are sure to be quickly revealed in the coming weeks, so keep your eyes on Inside Universal for more on Halloween Horror Nights as it happens.