Disney has announced its planned development for Disney Vacation Club will be an entirely new resort near Epcot called Disney Riviera Resort.

Estimated to open in fall 2019, the Riviera Resort is slated to be the 15th Disney Vacation Club property, with approximately 300 units spread across a variety of accommodation types.

The resort will also be connected with the newly-announced transportation system of gondolas, called the Disney Skyliner, which will connect the new Disney Vacation Club property, Disney’s Art of Animation, Pop Century and Caribbean Beach resorts with Disney’s Hollywood Studios and the International Gateway at Epcot. 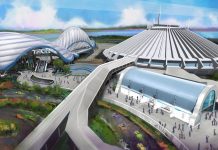