On the same day the story broke, Hillcrest Real Estate LLC, who owns the Hilton Los Angeles/Universal City, filed a “Development application with the City of Los Angeles to expand their existing property to include a new hotel addition adjacent to the famed Universal Studios Hollywood.” The new expansion would include a new 15-story addition to the existing hotel and would include 365 new hotel rooms, according to the press release. The existing hotel, which opened in 1984, has 495 rooms in the 24-story building. 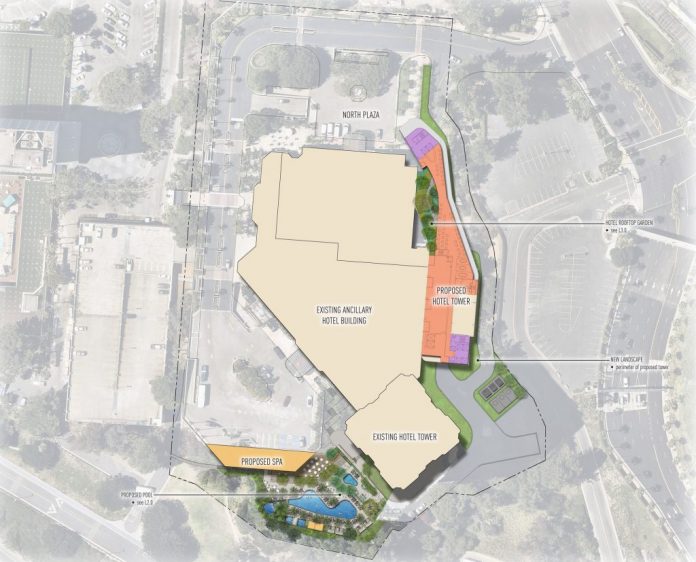 According to Mark Davis, CEO of Hillcrest Real Estate and the General Manager of the Hilton Los Angeles/Universal City “We have seen the impact of the significant increase in area tourism firsthand, and we’ve done our best by spending millions of dollars to upgrade the current hotel to address those needs,” said Davis. “Hilton Universal has been operating at near capacity for years, and with the recent opening of new attractions drawing visitors from across the globe and the Summer Olympics returning to Los Angeles in 2028, we must expand our operations to meet the incredibly high demand.”

The tourism industry for Los Angeles is growing at record pace, as we mentioned in our article from earlier in the year at the L.A. Tourism press conference. Beyond just the 47.3 million visitors in Los Angeles during 2016, Los Angeles International Airport saw a rise in travelers as 80.9 million travelers passed through the airport.

Tourism is growing and with the continued expansion of Universal Studios Hollywood, hotels are a major need in Los Angeles. Mayor Garcetti and the Los Angeles Tourism and Convention Bureau touted the need for more hotels during the press conference as well.
With the recent proposal from Hillcrest Real Estate LLC, the next step in the process of moving forward will be when The City of Los Angeles commissions the preparation of the Environmental Impact Report. Once the public has had time to review the report, public hearings will take place in 2019 to allow the public to voice their concerns.

However, the Hilton Universal has perhaps a bigger obstacle in their way in the form of Universal Studios. Inside Universal reached out to NBCUniversal and was offered this comment from the company:

“We are surprised to hear that Hilton would submit an application without reviewing plans with us and receiving consent from NBCUniversal as they are obligated to do.  Our key priority is to make sure that any development is compatible from a scale, density, traffic and other impacts standpoint. We understand the currently proposed project substantially exceeds what is allowed by current zoning.”

While the obstacle between the Hilton Universal and NBCUniversal continues, one has to wonder why Universal Studios Hollywood has yet to build their own on-site hotel. We covered this situation in a recent article detailing the NBCUniversal Evolution Plan that was passed by The City of Los Angeles City Council in 2013, that called for two 500-room hotels.

One thing is for certain, hotel expansion is coming to the property, in what form is a completely different question.