In 2013, the Los Angeles City Council approved the NBCUniversal Evolution Plan, which allowed major construction to begin and paved the way for bringing the Wizarding World of Harry Potter theme park experience to California. In this plan, Universal Studios Hollywood had prepared multiple phases for the property, which included additions in the form of theme park-accessible hotels.

The first hotel is expected to be built upon the former Fung Lum Restaurant location that was demolished in favor of widening Universal Hollywood Drive and accommodate the larger traffic leading into the park and hotels.  A second hotel, which could have housed a possible convention center area, near the main entrance of the theme park that would wrap around the security screening area and the Universal Globe Fountain.

According to an original model that was on display in 2013, hotels were designated as future development on the Universal property and not necessarily meant to be guaranteed within any phase of the 20-25 year Evolution Plan.

Phase 1 of the Evolution Plan was included in part with the announcement of the 5-Year Epic Transformation, which brought heavy construction throughout the theme park beginning with Transformers: The Ride – 3D in 2012 and completed with the opening of The Wizarding World of Harry Potter in 2016.  Universal Studios Hollywood saw increasing growth in attendance and guest spending as the park continued to revitalize and re-imagine itself. The park even experienced record-breaking crowds during the holiday season of 2016, which saw the park close its doors to new ticket sales due to one-day tickets being sold out.

Even though Comcast has spent hundreds of millions of dollars investing in new infrastructure at Universal Studios Hollywood, the park still lacks its own on-site hotel.

There are the two hotels located near the park – namely the Universal Hilton, and the Universal Sheraton – but neither of these hotels are owned by Universal; and are located outside of Universal City property lines.

The question remains: What future does Comcast see in Universal Studios Hollywood?

Does Comcast want to have a resort-level experience on the West Coast?  Is the California business model sustainable to warrant the need to keep guests on the property with a multi-day experience?

When looking at other theme park resorts such as the Disneyland Resort, Walt Disney World, Universal Orlando Resort, and LEGOLAND California Resort, each of the destinations have recently announced hotel additions.

Disneyland recently announced they would be building a new Four Diamond hotel on property, which is set to open in 2021.  Six Flags Magic Mountain also announced they were expanding to a 365 operating calendar year for the first time in their history; and with their growth – came a hint of having their own on-site hotel.

With these new hotel options, it can almost be guaranteed that growth is expected in future attendance for each of these companies.

In Southern California, the expectation of the 2028 Summer Olympics coming to Los Angeles will no doubt bring a major attendance spike to local tourism, which the theme parks and the entire region is expected to capitalize upon.

The recent news of Saddle Ranch Chop House closing its doors on January 2, 2018 brings up interesting questions. If Comcast wants to place a hotel on their own property, could this be a suitable location or would there be another more desirable placement in mind? One has to wonder if the area will be for redevelopment or repurposed for another retail space. Ultimately, the focus on profit is the main driving point for change. This location happens to be very close to the county line, which could place the hotel outside of Universal’s property and out of their immediate control for profit margins. 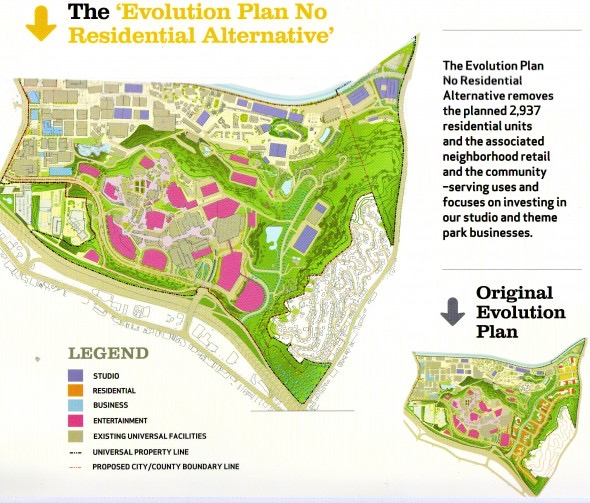 Universal CityWalk Hollywood has also changed many venues lately in favor of franchise businesses where Universal can profit, rather than renting the venue space to a vendor. This practice has worked very well at Universal Orlando, and has shown major success to their resort experience on the East Coast.

With the many, recent changes at Hollywood trying to match their sister park in Orlando; could Universal Studios Hollywood be in for more growth opportunities to match a similar product model? Could we see an NBC Sports Grill Restaurant take the place of Saddle Ranch, much like the recent addition of Margaritaville – which has been in Orlando for multiple years?

As of today, SeaWorld San Diego, Six Flags Magic Mountain, and Universal Studios Hollywood are the only Southern California theme park destinations without their own hotel on their property.  The current business models for these properties are a major step below the competition when a resort-level option is available in nearby Orange County and not- too-distant San Diego County.  Even though these properties focus on different regional clientele, there is a demand for growth that will bring more guests to all the theme parks of Southern California.

We can see that business is booming in the tourism industry and hotels are an excellent opportunity to have available for guests looking to spend their time at a world-class destination.  If Universal Studios Hollywood wants to focus on keeping the guest on their property and capitalize on the money that is coming, a multi-day experience will be needed soon…and somewhere to sleep!