Many of DreamWorks Animation’s favorite characters were on hand to join Kung Fu Panda’s own, Master Po, including; Madagascar’s Alex the Lion, the Penguins—Skipper, Rico, Kowalski and Private, and King Julien; Trolls’ Poppy and Branch; and Shrek’s Puss ‘n Boots, Shrek and Fiona. 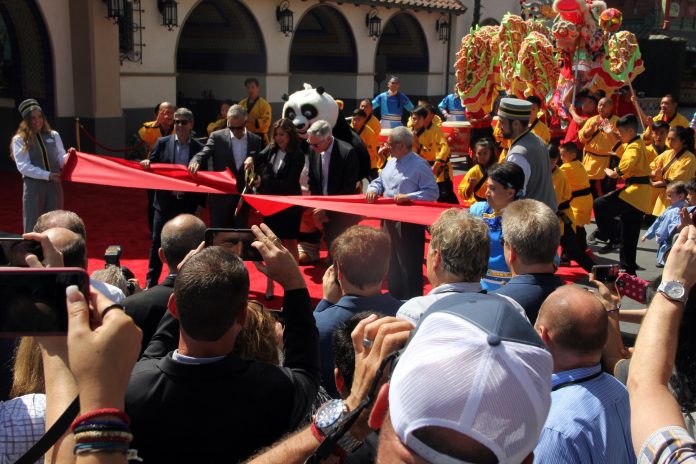 The Grand Opening festivities also included a dragon warrior parade, along with a Kung Fu Martial Arts display – which eventually included Po, himself.

As for the attraction – “Kung Fu Panda: The Emperor’s Quest” tells the story of Po embarking on a mission to deliver “the rare and precious Liquid of Limitless Power” to the Emperor’s Palace.

The attraction introduces the first-ever integration of interior projection mapping designed to engulf guests in 180 degrees of immersive adventure. Coupled with seven Christie 4K Boxer Cinema Projectors and 360 degree surround sound audio, and physical effects; the attraction is as close to being “3D” without actually being 3D. Universal explains that 3D glasses would have limited the guest’s field of view, so it would have diminished the experience of the attraction.

The use of projection mapping is what really sets this attraction apart from being “just another theater attraction” and utilizes some really neat tricks and effects – especially when we reach the attraction’s climax. 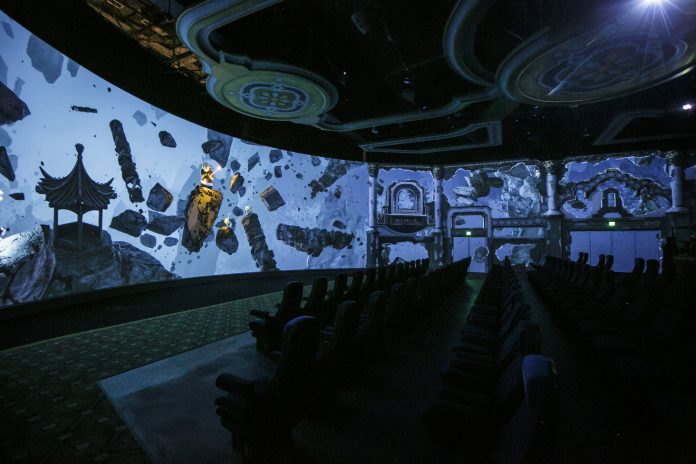 Irwin also hinted that the new theatre was designed with “flexibility”, so other DreamWorks properties and characters may show up sometime in the future.

In addition, this summer, guests will be able to meet Po and Tigress as part of a special character meet and greet located within the park’s Universal Plaza.  A replica of Mr. Ping’s Noodle Shop, which made its debut during this past year’s Lunar New Year event, will be returning; offering authentic Asian cuisine.