Within the past few months, Universal has updated the lockers at several attractions, ditching the biometric fingerprint scanners with new ticket-scanning lockers, using  “Locker Link” technology – which uses the barcode on the back of guests’ park ticket.

The lockers are said to be more efficient, reducing the amount of time spent renting a locker. Each group of lockers comes in two sizes; a standard size, which can fit cameras and certain merchandise, and larger lockers, designed to fit large purses and bags. At this time, guests who use a mobile park ticket are asked to speak to a locker attendant to help rent a locker.

Since the new lockers come in different sizes, Universal has also begun to charge $2 to rent a larger locker. Standard lockers remain complimentary for a limited amount of time. Most of the attractions do not allow you to bring your items on the ride, so lockers are necessary to be able to ride the attraction. The only exception are the water rides, in which renting a locker is optional.

The new lockers were first installed during the Incredible Hulk Coaster refurbishment in 2016, and have since been added to Revenge of the Mummy, Men in Black: Alien Attack, Dudley Do-Right’s Ripsaw Falls, Hollywood Rip Ride Rockit, and Harry Potter & the Escape from Gringotts. The changes are expected to also be made at other attractions using lockers, such as Harry Potter & the Forbidden Journey and Jurassic Park River Adventure. 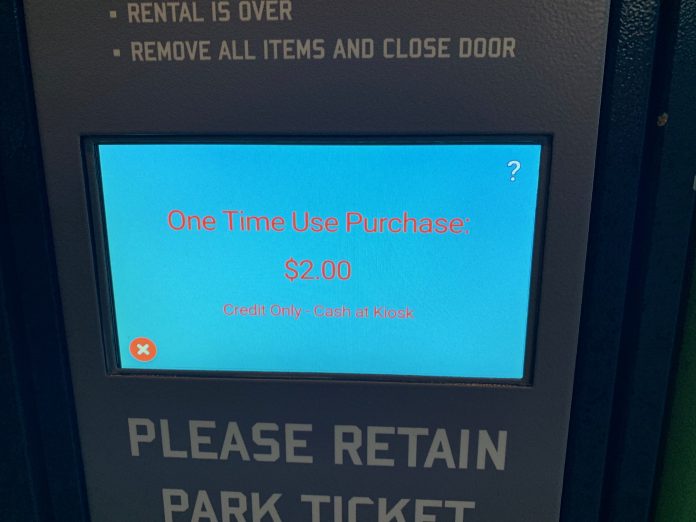 The change only impacts the new locker systems, with the exception of Ripsaw Falls which has always charged to rent a locker. It is worth noting that there are far less large lockers to rent at each attraction in comparison to the smaller standard-sized ones; however, no reason has been given for the change, or if the change will be a permanent one.