Universal Studios Hollywood has announced its next “Running Universal” race will feature DreamWorks Animation’s Trolls franchise on Sunday, April 26 with a 5K, a Kids’ 1K and a 10K run.

Guests will run through the Theme Park and part of the Universal Backlot, passing iconic film sets, and finally crossing the finish line at 5 Towers on Universal CityWalk while being entertained by their favorite characters from the 2016 animated blockbuster and the upcoming sequel, Trolls World Tour, in theaters April 17, 2020 – such as Branch, Poppy, and Guy Diamond. Other DreamWorks Animation characters will also be on hand, such as Shrek, Princess Fiona and Puss in Boots; Po and Tigress, as well as Alex and King Julien.

Registration is now open, but space is limited. Visit runninguniversal.com for race times, to register and to learn more about the various ticket packages, including, Standard, VIP and Play All Day, which features one-day admission to Universal Studios Hollywood that can be enjoyed up to a week after the event. All packages include complimentary parking and post-race refreshments and beverages.

All participants will receive a collectible Trolls drawstring backpack, a “Running Universal” T-shirt and finisher medal. “Running Universal” featuring DreamWorks Animation’s Trolls will conclude at Universal CityWalk with a lively celebration at the 5 Towers Stage.

The Running Universal series launched just last year, starting with the sold-out “Minion Run” in May 2019 and continued with the recent “Jurassic World Run” at Universal Studios Hollywood. Universal Orlando Resort will be hosting its inaugural Running Universal Epic Character Race 5K and 10K weekend on February 1-2, 2020. For more information about “Running Universal” events both in Hollywood and Orlando, visit runninguniversal.com. 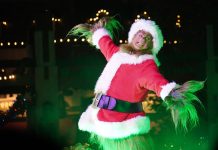