Universal Orlando has opened the remaining 2 rooms inside the Halloween Horror Nights Tribute store – themed to a spooky attic and the “Ghost with the Most”, Beetlejuice.

The new rooms have been teased since the store opened, with a sign in the walkway saying “Coming Soon”. Guests first walk through a hallway full of photos of each year of Halloween Horror Nights before entering the new sections. 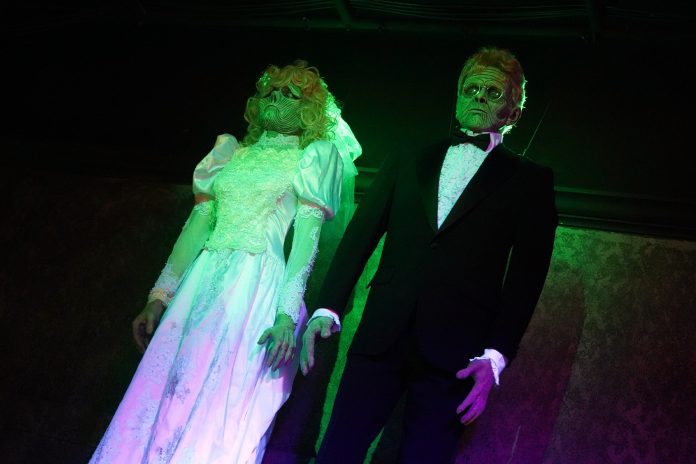 The new Beetlejuice area pays homage to one of the original faces of Halloween Horror Nights, with décor inspired by iconic scenes from the film. Fans will notice many hidden references throughout the room from the film, including some Zagnut wrappers, a chalk door outline, and a business card to Maitland Hardware.

Inside the spooky attic, Universal is offering 20 sweet and savory items, including the Halloween Confetti Cake ($7.99), Vegan Brownie Skull ($7.99), Cherry Gummy Beating Heart (that actually thump, $5.99) and more. Guests can also choose from an assortment of giant donuts that glow under the blacklight, including a Worm in Dirt donut and Maple Bacon donut. If you’re looking for a savory option, a pretzel-stripped foot-long dog ($11.99) is available, as well as a bacon, cheddar, scallion, waffle stick with a jalapeno maple drizzle ($7.99). 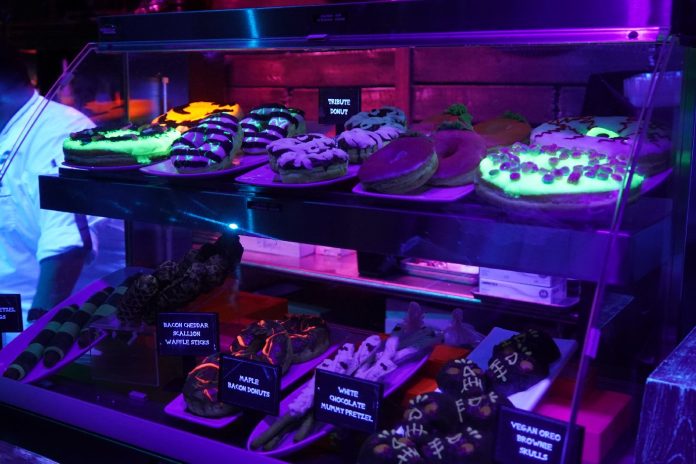 Even though the popular event has been cancelled, fans have been getting their horror fix with the Tribute Store since opening in late July. Each room features a collection of limited-time “throwback” merchandise – from t-shirts and socks to posters, face coverings, and more. Universal has been continuously adding more merchandise by the week, and it seems they plan on adding more throughout the season.

Guests can also browse the assortment of Halloween Horror Nights merchandise and make purchases from the comfort of their homes by visiting Universal Orlando’s Online Merchandise Store at shop.UniversalOrlando.com.