On April 7, 2016, Universal Studios Hollywood debuted their long awaited mega-attraction, The Wizarding World of Harry Potter. To give you an authentic account of Wizarding World’s grand debut, we joined with the fans and camped out overnight. Here’s a play-by-play on how the entire experience played out.

To give you the necessary backstory, we’ll begin with Sunday, April 3. By this time, Universal hadn’t made any public announcements regarding the impending opening, and how guests – with reserved tickets – should prepare. In an effort to gather information on how best to navigate and prepare for the opening day events, we called Universal’s Guest Relations department and were given a specific set of instructions. However, just two days later, a reader on our forums was a different set of instructions from the very same department – starting a trend of disorganization that would continue throughout the week.

Throughout that day, the editorial team called several times in an attempt to gather correct information to provide to our readers. The problem? Six of those calls relayed completely different information. At the same time, our followers on social media were reporting the same issues – everyone had received a different set of instructions. We had hoped to release an article early into the week with a detailed description on how best to handle the April 7 event, but it became clear that it would not be possible given Universal’s lack of consistent information. 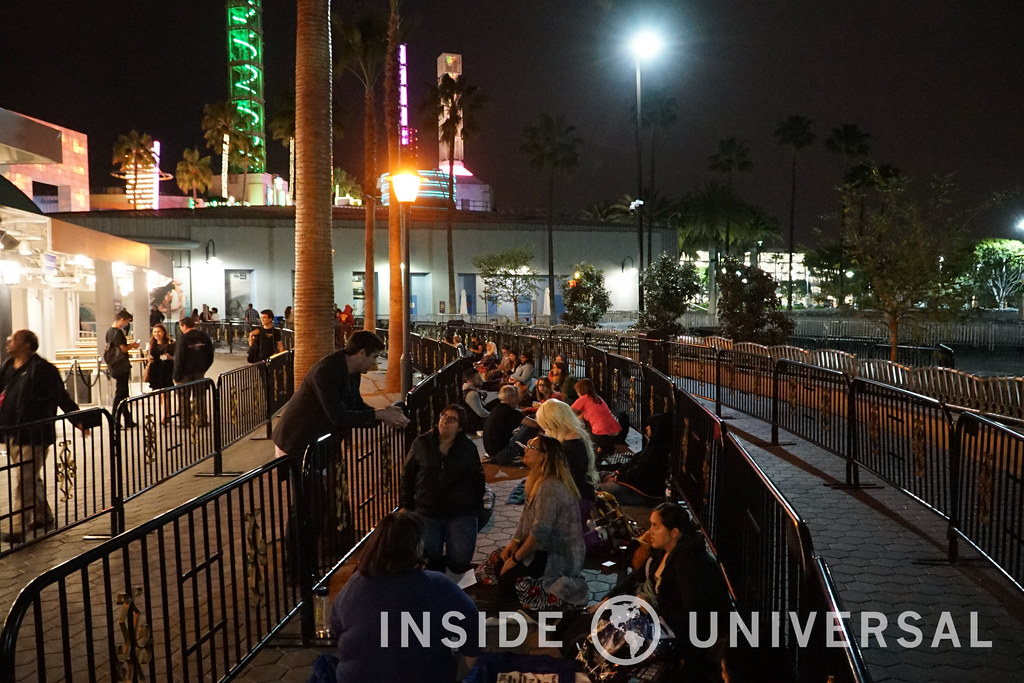 As Wednesday April 6 came around, Universal’s narrative continued to remain frustratingly unclear. Social media and forum users who were on site trying to gather information from Universal team members were still being given conflicting information. Some were told the line for opening day would begin at 2:00 PM on Wednesday, April 6, while others were told that guests may not line up no later than 2:30 AM on Thursday, April 7. Finally, the last prevailing (and correct) narrative involved guests lining in front of the globe at 12:00 PM, with the first 250 guests being let into the park at around 2:30 AM.

While we were hoping at some point that the narrative from Universal would become consistent, it did not. We decided to arrive at noon to receive our wristbands and to acquire information regarding the situation, and once again, we were given conflicting information, which made it hard to understand what the park had planned.

After 48 hours of inadequate service from Universal’s Guest Relations, we came to the realization that the only way to be sure what was happening was to have our editorial team on the ground. This was Universal’s biggest moment in their fifty-two year history and the ball was already being dropped from an operations standpoint. 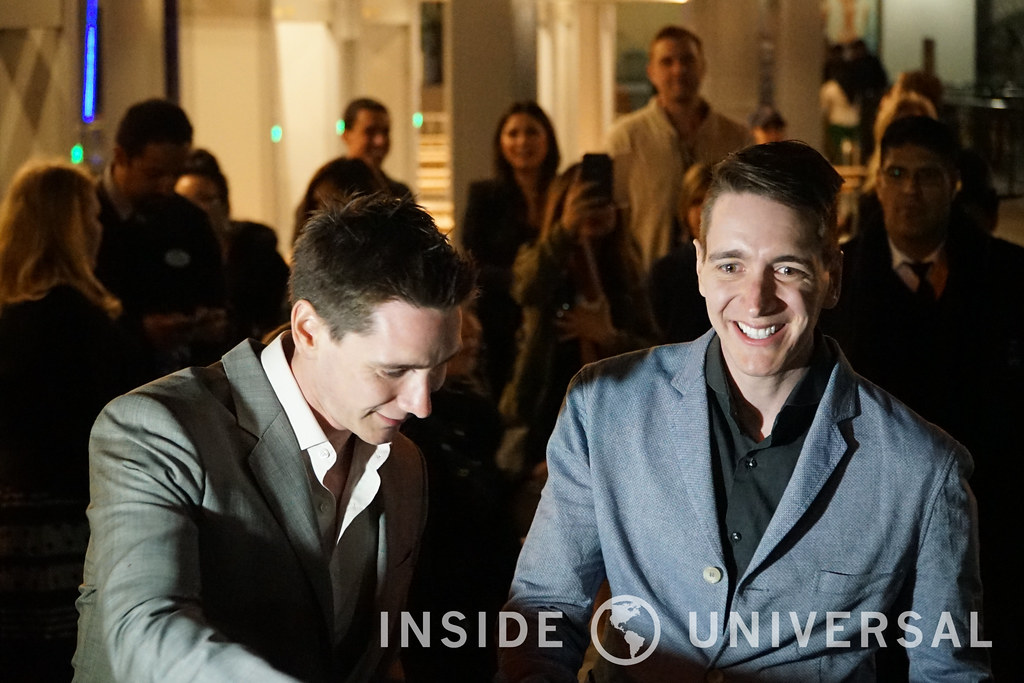 James and Oliver Phelps hand out wands to participants in line

With all of that being said, our night began at 9:50 PM on Wednesday, April 6. We arrived in the waiting area, which was queued directly in front of the new security bag check. We had blue wristbands 30 and 56. Universal had been distributing two sets of wristbands: 250 of them were blue, while the remainders were yellow. Each wristband was numbered starting with twelve. When it became time to let in guests, blue-wristband holders were to line up in numerical order. When we arrived, there were already thirty to forty people in line with a mixture of yellow and blue wristbands.

Those who were already in line were either making new friends or sleeping on blankets they had brought from home. For the convenience of those waiting, Universal CityWalk posted a sign notifying guests that Starbucks and Popcornopolis would be open for twenty-four hours. However, when we walked throughout CityWalk at 10:45 PM, Popcornopolis was closed. However, Ludo Bird stayed open till 12:30 AM for those looking for something a little more than coffee and pastries.

At 11:00 PM, Universal’s social media department came out and made an announcement to those waiting in line that they had something special in store. Sure enough, James and Oliver Phelps – otherwise known as the Weasley twins in the films – came out and greeted everyone not just with a hello, but a free interactive wand.

After the excitement of receiving our own interactive wands, Universal followed that up with free jellybeans for everyone.

We’ll let you decide if that is a step up or down.

The crowds grew over the course of the evening into what looked like 400-500 people. Around 2:00am Universal’s operations department came out and spoke with the crowd and informed us all that we needed to begin to be ready to move into another queue just before going through the security bag check. 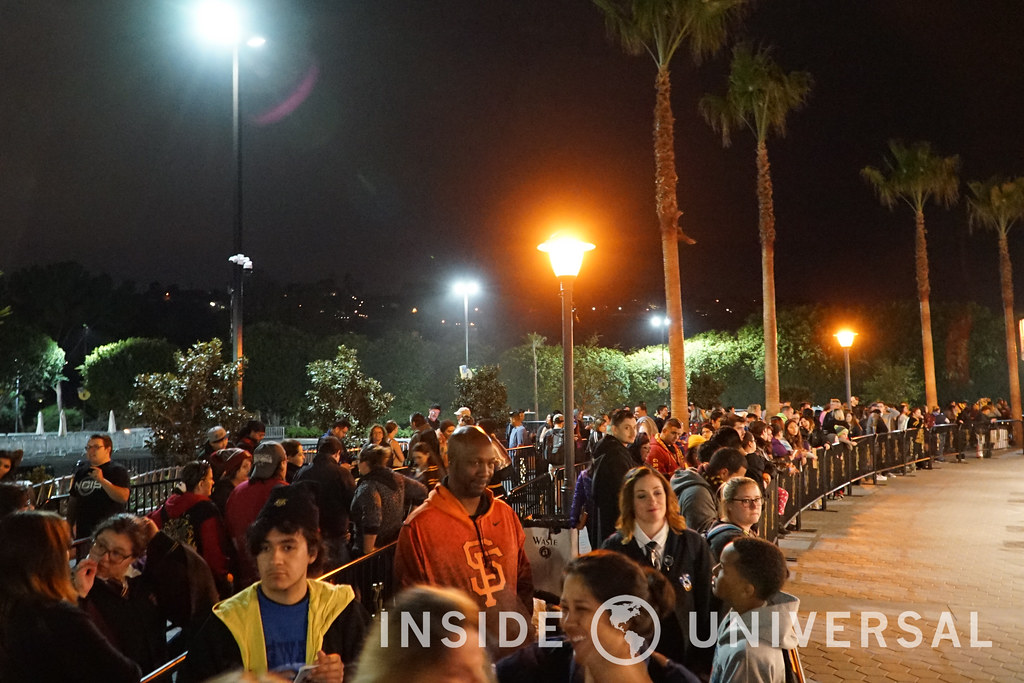 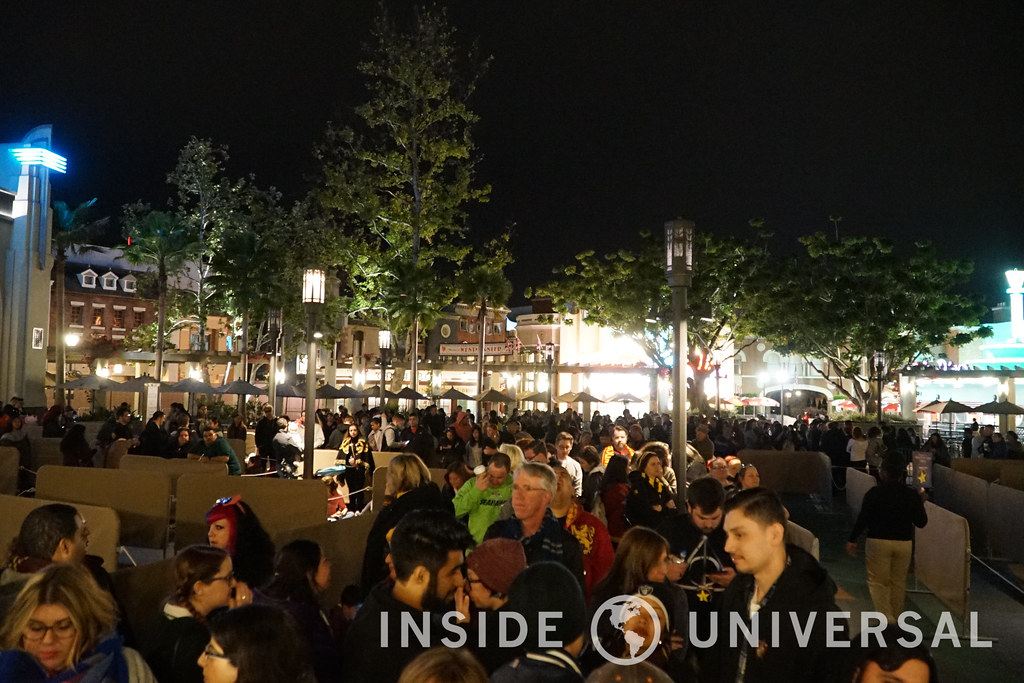 Guests were organized inside Universal Plaza before the main event

As everyone began to get situated, they asked everyone to get into numerical order. Given the size of the crowd (along with the fact that blue and yellow wristbands were mixed together), that simply wasn’t going to happen.

As 3:00 AM rolled around, security began to take their positions at the bag check area and groups of eight or ten were let in. Once we made it through security, we proceeded through the turnstiles at the main entrance and barricades were lined up through Universal Boulevard, with the Universal Studio Store, Starbucks and Mel’s Diner open for guests to shop and order food. Universal then began to funnel guests into a massive queue inside Universal Plaza.

Rehearsals occurred while guests waited, and at 6:00 AM, Universal team members began to walk us over to the opening ceremony located directly in front of the archway of The Wizarding World of Harry Potter.

Kurzweil began his speech by thanking John Williams and the LA Philharmonic for their wonderful performance on April 5 at the premiere of The Wizarding World. After he spoke about April 5’s wonderful performance, the conductor came back out to let everyone know that some special guests have arrived and asked if Kurzweil could light the way for them to come out. Kurzweil grabbed a wand and shouted the spell lumus lumus and introduced Warwick Davis, Tom Felton, Evanna Lynch, James Phelps and Oliver Phelps.

Once they made their way onto the stage, it was time for the countdown to begin. The conductor excused himself and headed back off behind the archway. Kurzweil asked for everyone to raise their wand and countdown from five and shout the word revealio. The crowd counted down in unison, revealing the town of Hogsmeade filled with the townspeople and students of Hogwarts. Kurzweil gave his final grand opening speech, welcoming guests to a land “where the magic comes to life.” With fireworks and confetti flew into the air, crowds of dedicated fans made their way into The Wizarding World of Harry Potter as the first official guests of the land. 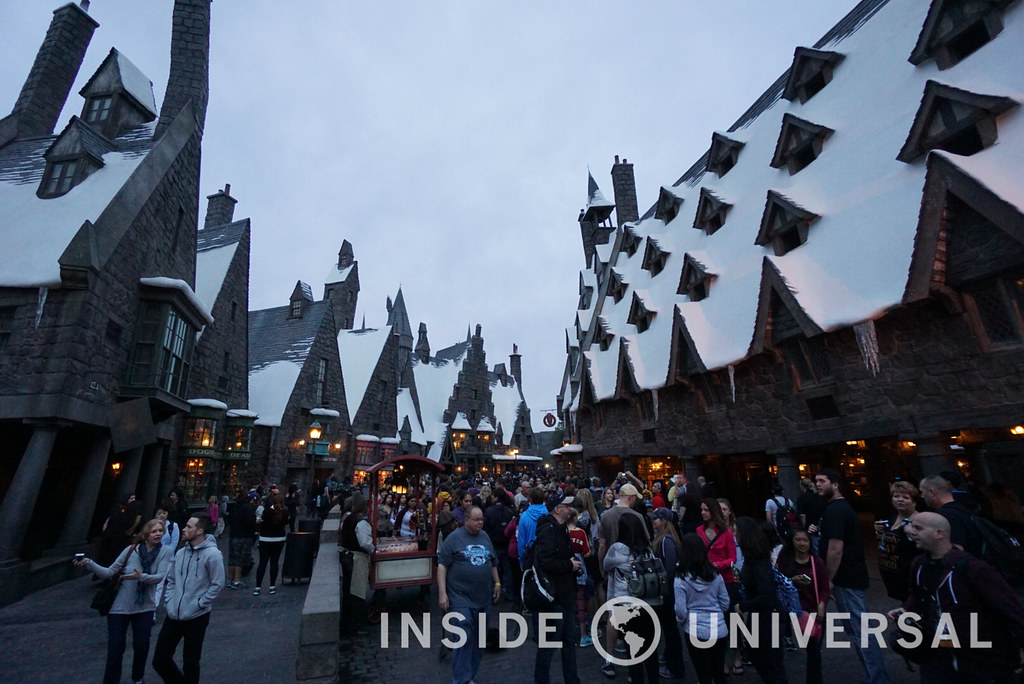 Immediately, lines for the three main attractions grew: Harry Potter and the Forbidden Journey soared to a two-hour wait, Flight of the Hippogriff grew to a sixty-minute wait and Ollivander’s Wand Shop experience grew to a fifty-minute wait.

The Lower Lot remained mostly empty, with the bulk of the guests concentrated inside Universal’s newest land. As the day progressed, Ollivander’s had ballooned to a staggering one hundred minute wait. The line for Ollivander’s backed all the way up to the first Butterbeer cart in front of Three Broomsticks while Forbidden Journey grew to a three-hour.

In the end, despite Universal’s frustrating service leading up to the land’s debut, the park’s operations team really shined once the park had actually opened. Crowd flow was great and Universal team members were obviously excited to see their park’s largest addition come to fruition. The five-year epic transformation has concluded, and the theme park had truly redeveloped its infrastructure for the next decade. All in all, camping out with the fans of Harry Potter was a blast and excitement for the franchise and their love for making new friends made it all worth it. 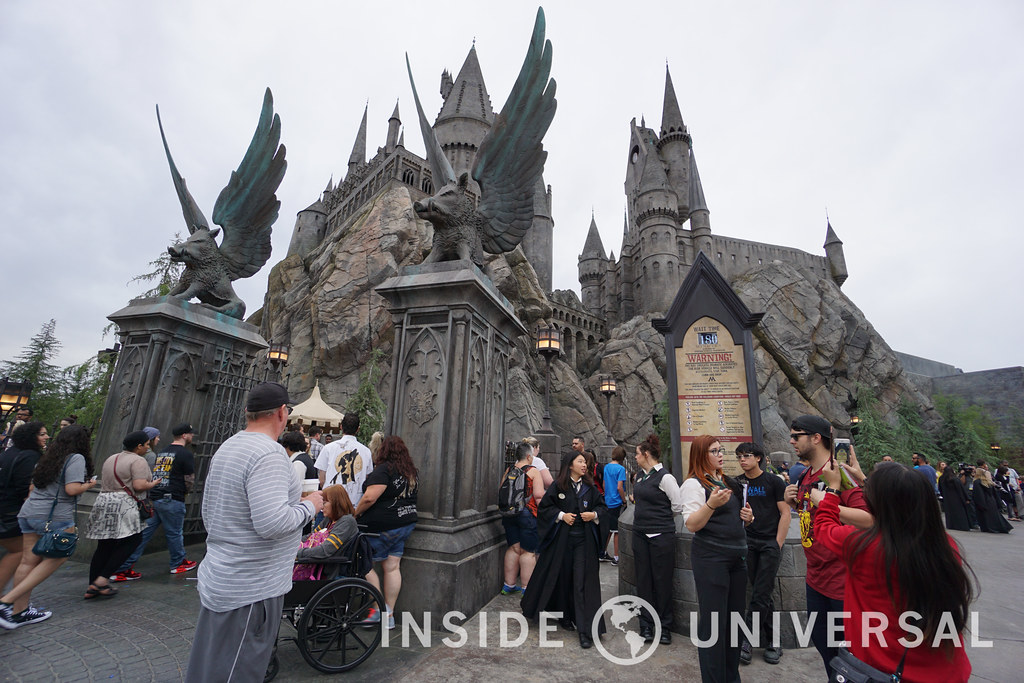