This June, Universal Orlando Resort’s 2012 Summer Concert Series will feature a diverse lineup of powerhouse performers, beginning with some of the biggest names in the music business. Orlando’s hottest summer event will kick off with live concerts by the talented cast of Nickelodeon’s hit TV series, “Victorious,” on Sat., June 9, and rock bands ZZ Top and 3 Doors Down on Sat., June 16.  Additional performing acts will be announced at a later date.

Cast of “Victorious” To Perform June 9

The cast of Nickelodeon’s smash hit TV series, “Victorious,” will get the party started at Universal Studios Florida on June 9. Theme park guests will also have the opportunity to preview upcoming episodes and participate in live Q&A sessions with members of the cast.  The event will culminate with an incredible music performance by the entire cast – including Victoria Justice, who plays the show’s main character, Tori Vega.

Currently in its third season, “Victorious” follows teenager Tori Vega as she navigates life at Hollywood Arts, a prestigious performing arts high school.  The show, a co-production with Sony Music, features original songs performed by Victoria Justice and the show’s ensemble cast.  The show’s first soundtrack, “Victorious: Music from the Hit TV Show,” debuted at the no. 5 spot on the Billboard Top 200 Album chart and features the show’s theme song “Make It Shine,” as well as the hit singles “Beggin’ On Your Knees,” “Freak the Freak Out” and “Best Friend’s Brother.”  For the month of March 2012, “Victorious” ranked as the #1 show across all TV with kids 6-11 and tweens 9-14.  Most recently, the series won the Favorite TV Show award at “Nickelodeon’s 2012 Kids’ Choice Awards.”

ZZ Top and 3 Doors Down to Perform June 16

On June 16, Universal Studios will be rocked by Rock and Roll Hall of Famers ZZ Top. With more than 25 million albums sold, the multiplatinum Southern rock legends have released classic rock staples such as “Sharp Dressed Man,” “Cheap Sunglasses” and “Gimme All Your Lovin’.”  Their album, “Eliminator” achieved diamond status, and ZZ Top’s worldwide success even earned a declaration of “ZZ Top Day” inTexas, the band’s home state. Named by VH1 as one of the “100 Greatest Artists of Hard Rock,” the band is currently working on their next album.

Also performing on June 16, alternative rock band 3 Doors Down will take the stage at Universal Studios. Originally from Mississippi, 3 Doors Down has scored 12 Top Ten singles, including “Kryptonite,” “Be Like That” and “Away from the Sun.” Their most recent album, “Time of My Life,” debuted in the top three on the Billboard 200.

Access to all Summer Concert Series performances is included with admission to Universal Studios Florida. On Saturday nights from June 9 to July 14, guests can top off their day of theme park thrills with a live performance by a top-name musical artist, such as the cast of “Victorious,” 3 Doors Down or ZZ Top.

For more information on this year’s event, visit http://www.universalorlando.com/Events/Summer-Concert-Series.aspx. 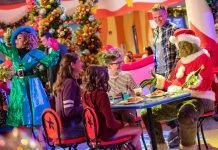 Families can meet and dance with Gabby from the hit Netflix series, Gabby’s Dollhouse, at Universal Studios Florida on September 24