March 11, 2013 – Universal Studios Hollywood just announced that Despicable Me: Minion Mayhem will be opening in 2014 on their official Facebook page – pushing back the widely speculated opening date of early 2013 and confirming rumors that Universal would be carbon-copying Hollywood’s Despicable Me ride system from Universal Studios Florida. As Universal officially notes:

No location has been announced, though many believe Despicable Me: Minion Mayhem will be housed in the former Terminator 2:3D venue.

One important note: we’ve been told by park officials that Hollywood’s attraction will have a few “surprises” in store that differentiates itself from Orlando’s original version. Whether this means a more immersive queue or the addition of a Despicable Me-themed playground in the former Coke Soak area remains to be seen. Full press release is located below, as well as an archive of our original post.

Universal City, CA — Universal Studios Hollywood announces the much-anticipated arrival of “Despicable Me Minion Mayhem,” a 3D Ultra-HD movie motion-simulator adventure. Universal Pictures and Illumination Entertainment’s worldwide blockbuster Despicable Me will come to life in Hollywood in an attraction modeled after the one in its sister park, Universal Orlando Resort® – with the addition of a few surprises unique to the Entertainment Capital of L.A.

“Based on the consumer feedback at our sister park, we expect the ‘Despicable Me’ ride experience to be a popular, family-friendly attraction for Universal Studios Hollywood. The ride continues the story line of the main characters from the blockbuster film through all-new 3D Ultra-HD animation, together with an interactive ride vehicle system,” said Larry Kurzweil, President and Chief Operating Officer, Universal Studios Hollywood. “In ‘Despicable Me Minion Mayhem,’ our guests will experience the hilarious and heartwarming characters of the beloved film in a whole new way.”

Guests will be transported into Gru’s house as they meander through his living room and encounter visual elements as seen in the film – including the moon-shrinking SR-6 shrink ray – while they zig zag through a zany adventure featuring Gru’s super-villain laboratory. The exciting journey continues as they swerve, bounce and plunge to get through the frantically humorous Minion training mission while donning specially designed 3D Minion goggles. Fun and frolic continue in a post-show dance party where Minion walkaround characters invite guests to strut their stuff in an impromptu Minion-inspired dance party.

“Despicable Me Minion Mayhem” was produced in collaboration between Universal Creative and Illumination Entertainment, and was recently honored as Best Animated Special Production at the 2012 Annie Awards, which recognizes Outstanding Achievements in the field of Animation.

February 20, 2013 – It’s official. In a statement to the Los Angeles Times, Universal Studios Hollywood confirmed plans to introduce a Despicable Me themed ride.

As the L.A. Times notes:

The planned Despicable Me attraction is largely expected to replace Terminator 2:3D, which had closed at the end of last year. Details are sparse, but the planned attraction is most likely going to be modeled after Despicable Me: Minion Mayhem at Universal Studios Florida.

Sources point to the former Terminator getting a quick refresh in the same style of Back to the Future: The Ride and the Simpsons Ride, which debuted in 2008. 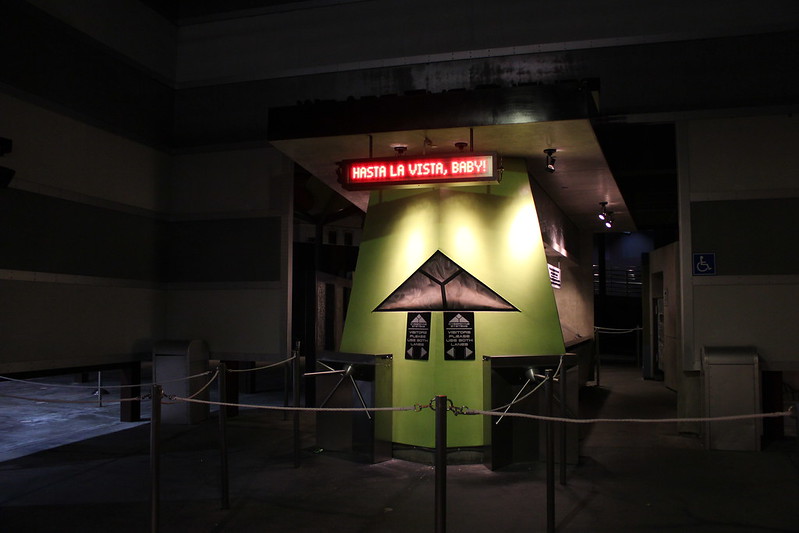 Despicable Me was expected to be the replacement to Terminator 2:3D as early as October 2012 – as reported by our own Chris Lord:

We’ll update this post with news as we get it. Stay tuned with Inside Universal for future developments.