November 7, 2013 – With Halloween Horror Nights over and done, there’s one major event just around the corner at Universal Studios Hollywood – Grinchmas! The annual Who-liday celebrations at Universal Studios Hollywood are set to begin on weekends in December, and Christmas week all the way up to the Who-Year. But while the event is just around the corner, we’re still in the dark on the official details in the wake of the major changes to the park.

In this special Grinchmas Preview, we’ll take a quick look into the rumblings we’ve heard, as well as giving our own predictions for this year’s fun.

This has been a main feature of the event in recent years, featuring characters from the film version of The Grinch as they and the residents of Whoville gather for the lighting of the Whoville Christmas tree. Featuring Martha May, Cindy Lou, The Mayor, and the Grinch himself, the Tree Lighting is a spectacular way to end the day.

So why are we hearing rumors that it’s been cancelled this year? One reason for this rumor is venue. For the past few years, the Tree Lighting was held in the space that the Wild Wild Wild West Stunt Show left behind. That space was taken away and led the way to the currently open Universal Plaza. Though Universal plaza boasts a large space, the bleachers and risers that typically comprise the arena space and the snow play area during the day will not fit comfortably in the new layout of the area. 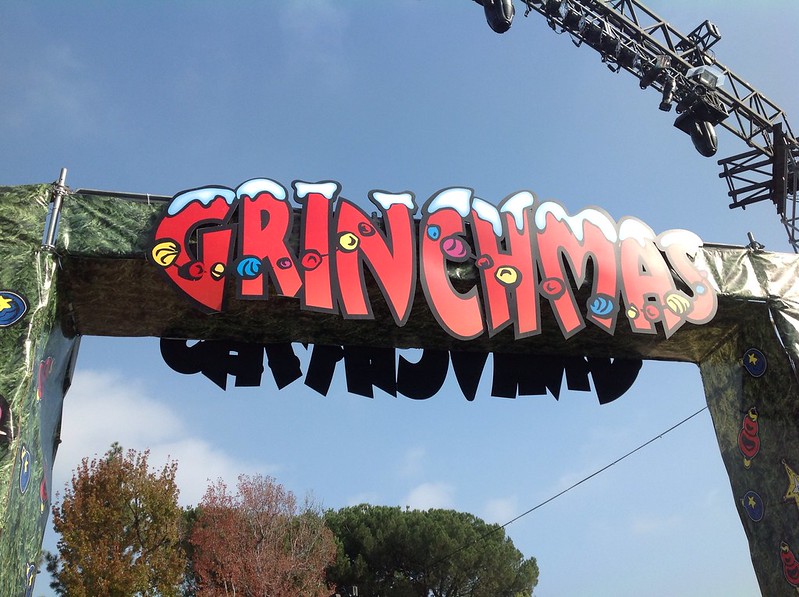 The question of where else in the park the tree and accompanying ceremony can go is what had people questioning the existence of a ceremony this year. Given the constraints on this year’s event due to construction ruling the upper lot, it is very hard to say where else the ceremony could be held.

However, a very recent development shows that the ceremony may still be on after all. An update from the park shows that the Whoville Christmas tree is currently being constructed in the middle of Universal Plaza. Whether or not the actual Tree Lighting Ceremony will go along with the tree is yet to be seen.

A quick look at the casting list for the holiday entertainment employee auditions shows clearly that the prominent Grinch characters from the film are set to appear. The roles were posted for the upcoming auditions a few weeks back, seeming to suggest that the characters that are featured in the ceremony will at least still be appearing in some way. Factor this in with the recent appearance of the tree looming over Plaza, and it seems that the ceremony may return this season. (Editor’s note: Universal has just updated their website to include some information on this year’s Grinchmas event and there’s no explicit mention of any tree lighting ceremony. If I were a betting man, I’m erring on the side of “no” for this year’s ceremony, though as you can probably tell, we’re still conflicted. – Jon)

Bear in mind of course that the character casting may still be solely for another part of the Grinchmas event…but more on that in the next part.

Another part of the Grinchmas event at USH is Whoville on the Backlot. During the Studio Tour, the trams pass through the Whoville set just behind the Bates Motel and Psycho Pass area. Instead of rolling past the set from Downtown Whoville, the tram stops as the residents of Whoville and the Grinch perform a song and dance routine featuring music from the film.

I can’t see any reason why this tram stop wouldn’t be included in this year’s event, especially since the Mummy’s Tomb and Fast & the Furious: Extreme Close Up are both closed, shaving about ten minutes worth of time off of the tour. With the tour pared down to around 45 minutes, the Whoville on the Backlot is a much needed addition to the holiday tour, and is fairly popular. 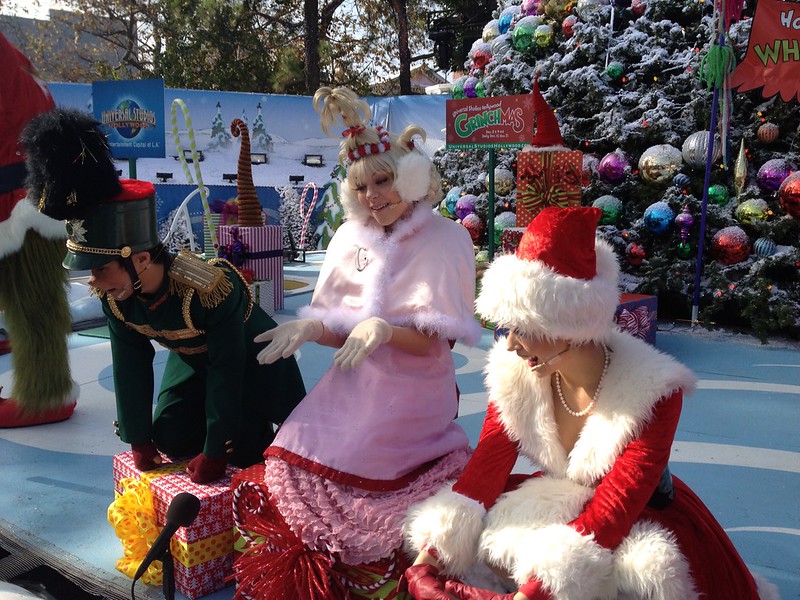 Recent years of the event have featured celebrities of various levels of fame reading the original Seuss story to park guests in the tree lighting arena. This is also a fairly popular event depending on the fan base of the guest doing the reading any given day. No idea on whether this will return, but due to the construction and the rather flexible nature of the event, it seems likely that it will be able to come back. There are alternative venues that could be used for this kind of event, such as Universal Plaza. Following the Spongebob Squarepants Shellabration held at the park in Plaza, it would be fairly simple to erect a similar stage in plaza for the celebrity to sit and read as the crowd stands below. There are a few other places for this to be held, so it seems likely to return for now.

An insanely popular component of the event. Lines to have a photo with the Grinch are often long and highly energized. Last year’s event saw special days added for annual passholders to come and have a special photo op with the Grinch. This exclusive photo op speaks to the popularity of the character in the park during this time of year. Several days were added to meet the demand from the annual passholder base. This is also fairly easy to stage and could be set in multiple locations in the park. Given last season’s demand, this also seems likely to return.

Personal opinion time! So don’t run to Vegas to bet on these, this is purely my personal thoughts on what we may see this year.

– The tree being built in Plaza currently seems to point to the Lighting Ceremony still being a go (unless they just LOVE oversized Christmas trees showing from down the hill). I think this portion of the event is too popular to get rid of outright. But then again, this is USH, and popularity of an attraction or show doesn’t mean it has a Get-Out-Of-Closure-Free card. It is still just as likely that it will be axed as it is that it will be back, and it’s still up in the air. I’m in the middle on this.

– Whoville on the Backlot is easy to run, though it can wreck havoc on tram timing for drivers. I see it coming back yet again, and probably not being changed all that much.

– Celebrity readings are likely to return and will probably feature the same levels of actor as usual. (Though I am still desperately mentally willing Jeff Goldblum to be one of those celebs…)

– Grinch photo ops are almost 99.9% guaranteed in my eyes. It’s easy money for Universal to sell photos and photo merchandise on the website, and since it’s only 10$ for the entire year for annual passholders to download however many in-park photos they want, it’s worth keeping even though many have their own cameras or phones they prefer to use.

– Snow play area is a 50/50. It’s snow. This is SoCal and we don’t get any of that. But after the first few minutes, the novelty wears off for many locals. I can see it returning just because we need more things to do in the park and it’s something that Disney doesn’t have, but I can also see it getting eliminated because it’s just snow.

– Mrs. Claus and her dancers will likely return as well. Again, we need more things to do at the event, and a street/stage show is a good way to get people’s attention for awhile. Considering we had the vampire dancers during HHN yet again this year, that bodes well for the Christmas themed lady dancers as well.

– Expect even more Seuss and Grinch-specific merchandise this year. It sells insanely well and new items have been appearing each year. Old favorites almost sure to return include the Grinch finger gloves, and the Grinch adult footie pajamas, both of which did well last season.

– It seems like they’ve been adding more and more decorations each year in recent years. I’m expecting the traditional but perhaps more details this time around. I’m especially excited to see what décor they put up in Universal Plaza, the space has amazing holiday potential.

And that’s my take on this year’s event! I’ll be covering Grinchmas from top to bottom this season, from the first decorations to the final days. As soon as new developments come in, you’ll be the first to know. To follow along with all of our Grinchmas coverage, and for year-round up-to-date information on the park, be sure to follow along with us throughout the holiday season.

As always, thank you for reading, and stay tuned for more! 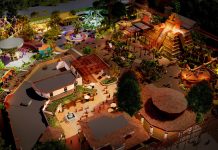