January 19, 2014 – With peak season fast approaching, construction projects in the park have kicked into high gear. The two most prominent of these projects are Despicable Me and the Simpsons Plaza, both on opposite sides of the Upper Lot. Here’s an update with what we know about each pending attraction change.

Along with the demolition of Doc Brown’s Chicken and the Hollywood Cantina, extensive work has begun on the queue for The Simpsons Ride. The reason for this work? Most likely for the inclusion of carnival games, similar to the Simpsons Plaza set up in Florida. A few of the carnival games that were previously located behind the Flintstone’s Barbeque are apparently finding a second life in the line for the Simpsons Ride.

Everything for the ride queue has been reworked at present, including the Gate A access point. How the queue will be diverted in the future is unknown, and it’s still not apparent how the positioning of the ride entrance and the carnival games will play out with peak season crowds.

In addition to the carnival game move, there is a new structure going in where the single balloon dart toss game was located, just next to the handicapped elevator access for the Starway. Everything that has been done to this area so far has been done with remarkable speed, likely in an effort to complete everything before the large Spring Break crowds begin arriving in March and April. Work on this structure began just last week, and is already in full swing.

The area that housed Doc Brown’s and Cantina is being leveled out quickly as well to make way for what we believe will be the Simpsons fast food boulevard, also a duplicate of Florida’s layout. With the removal of these two places, a new collection of dining options should soon be available, and crowds will hopefully become easier to manage.

Due to the speed of construction, it looks like the queue enhancements are on pace for Spring Break completion, with a possible opening date of Summer 2014 for the food court / Fast Food Boulevard dining area. 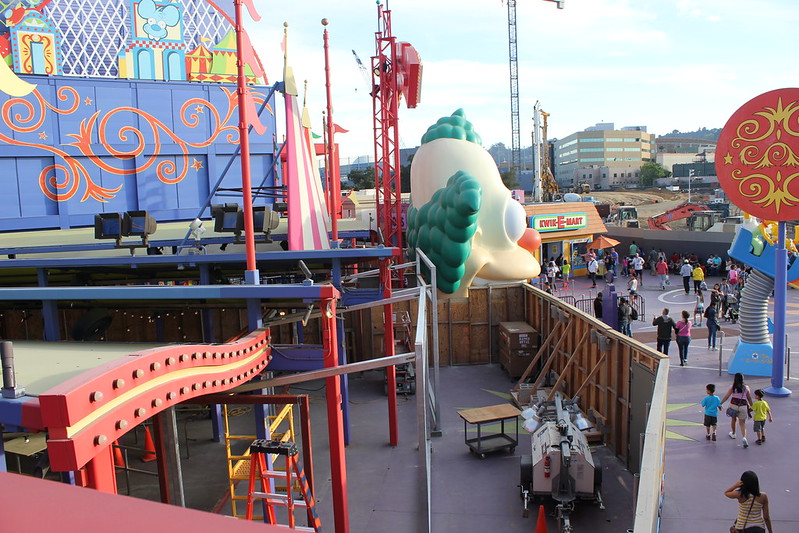 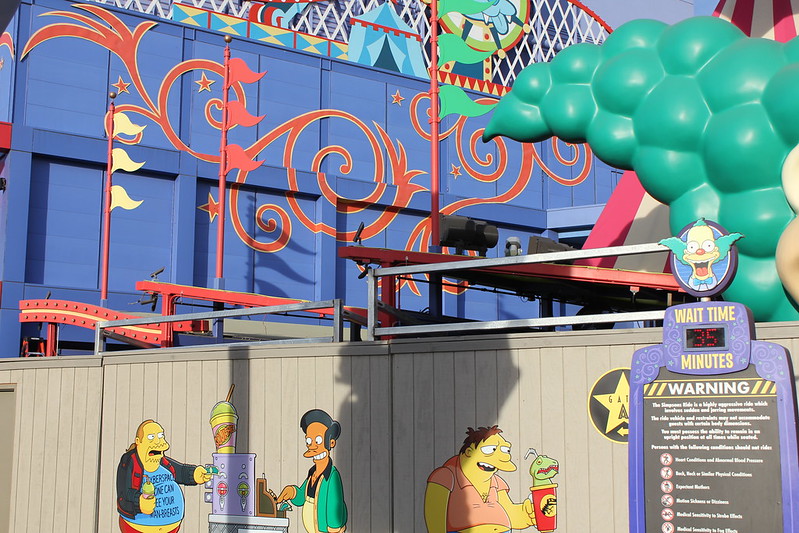 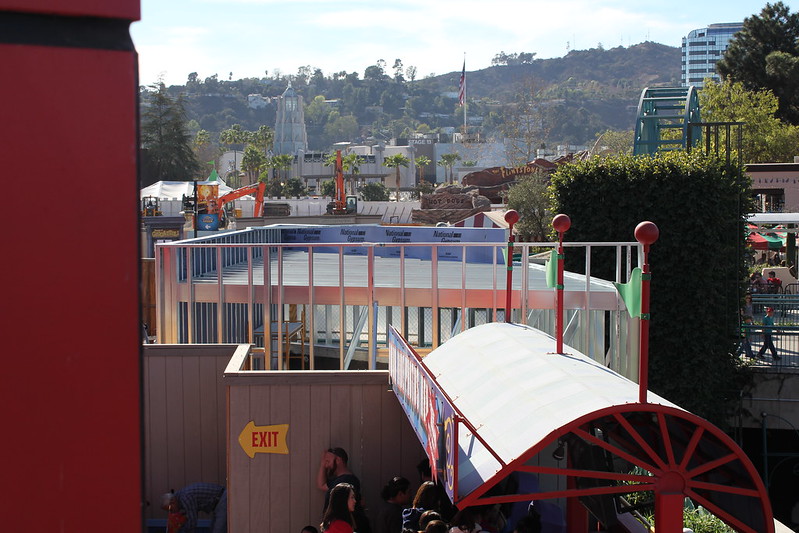 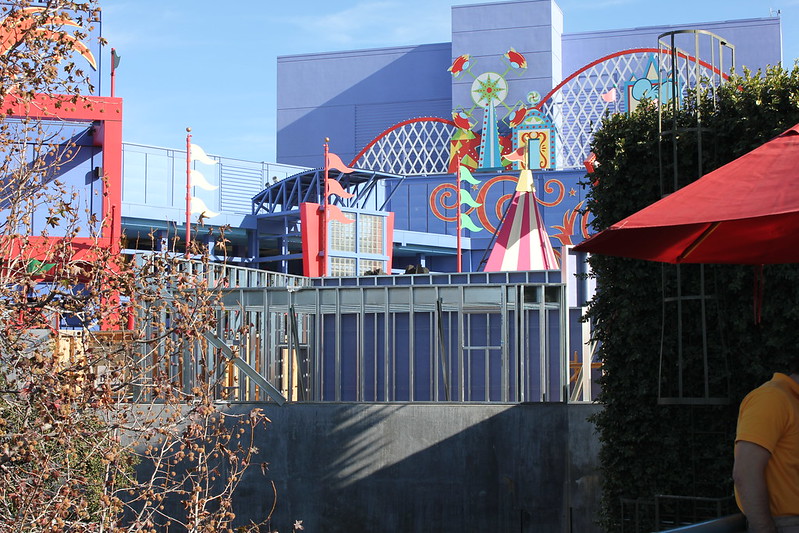 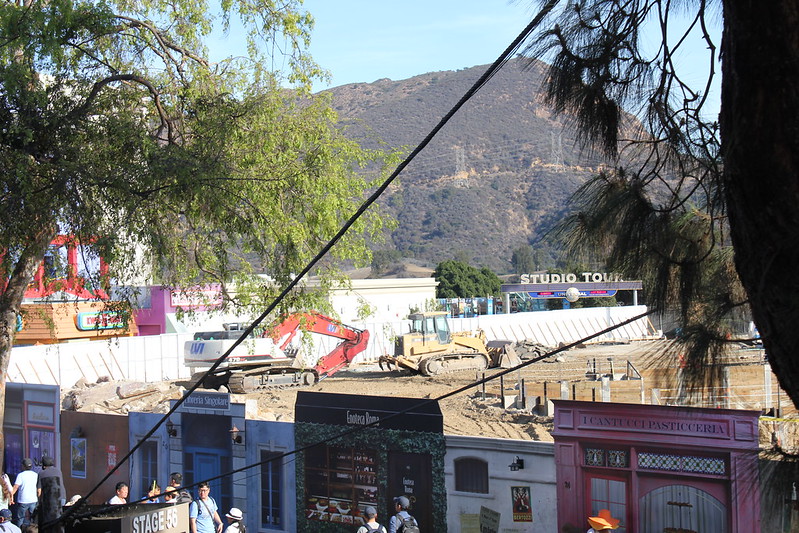 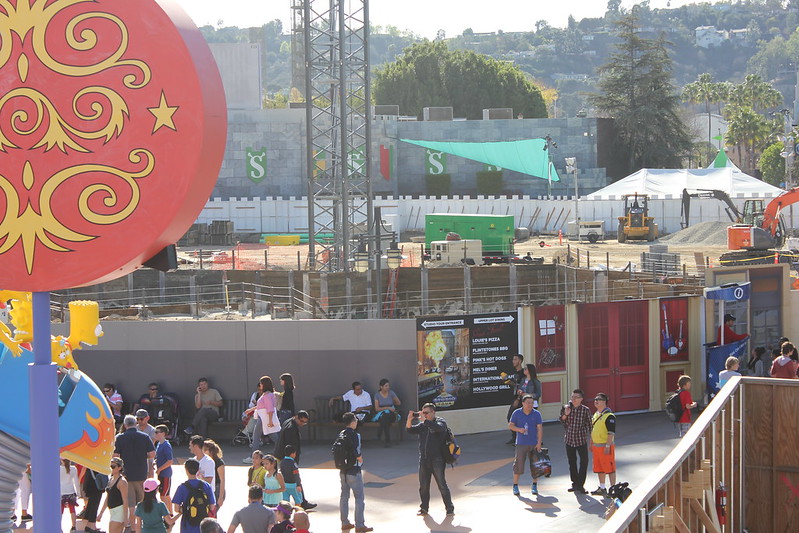 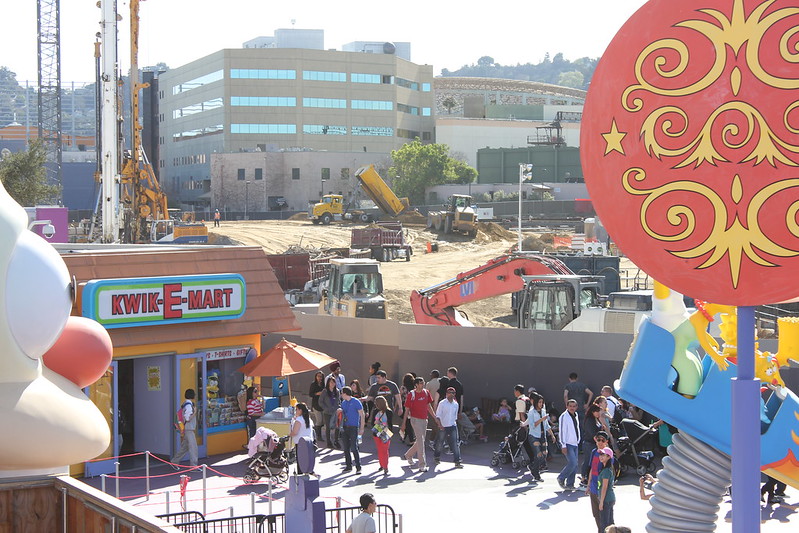 Despicable Me: Minion Mayhem is being finalized at a blistering speed, while work on the accompanying Super Silly Fun Land is also picking up. The entire SSFL area has been walled off from Baker Street and the Parisian Street. We were able to con firm that this was to put in a buffer zone between the heavy machinery being used and the park guests, as construction is now being done during park operating hours as well. Today, workers were seen frosting and then painting the windows on Gru’s house black, as well as putting on trim and painting windowsills.

Other details are being added on, such as Gru’s car in the garage of his house, and missiles from the movie being placed in the queue. Several spires have been added to Super Silly Fun Land as well, matching images of the area in the film.

The spinner seems to be taking up the majority of the area, and the flags on top of the support poles are visible from various places around the park – including inside Jurassic Park the Ride. The large size of the spinner has put the size of the new wet and dry playground in this same area in question.

Details on the new area are still very scarce, but the pace of construction has Despicable Me on track for soft openings in March, leading up to the grand opening on April 10. 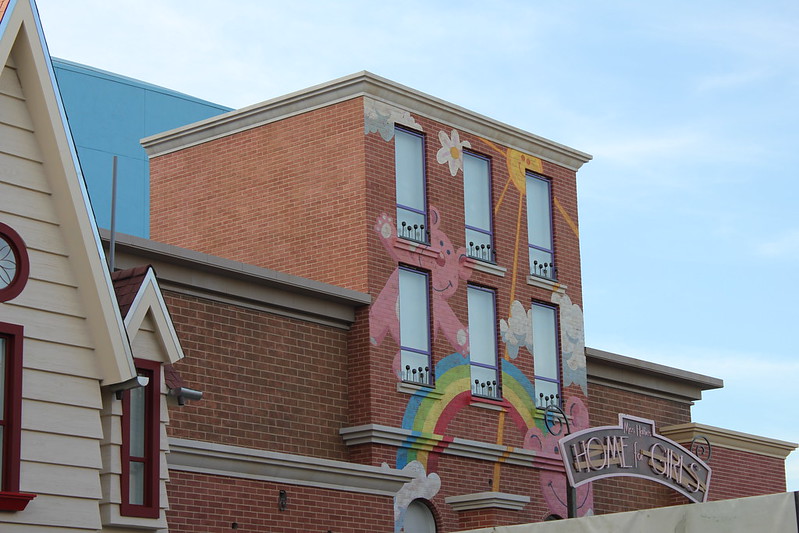 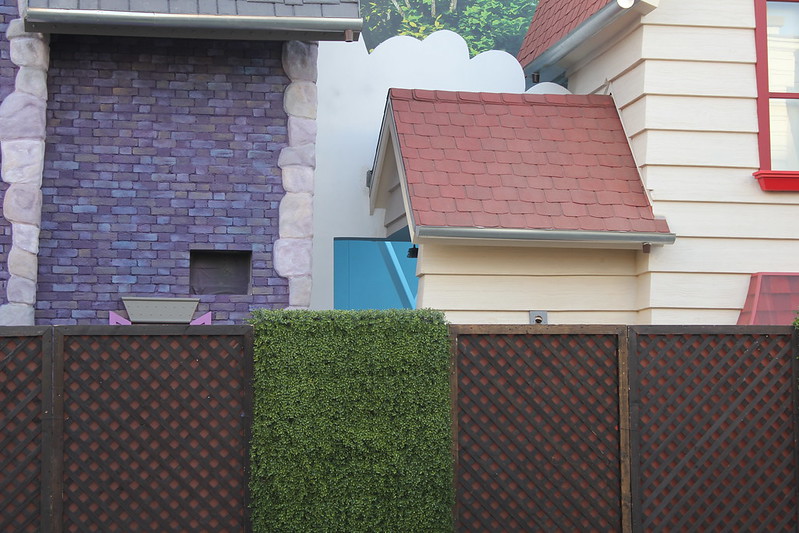 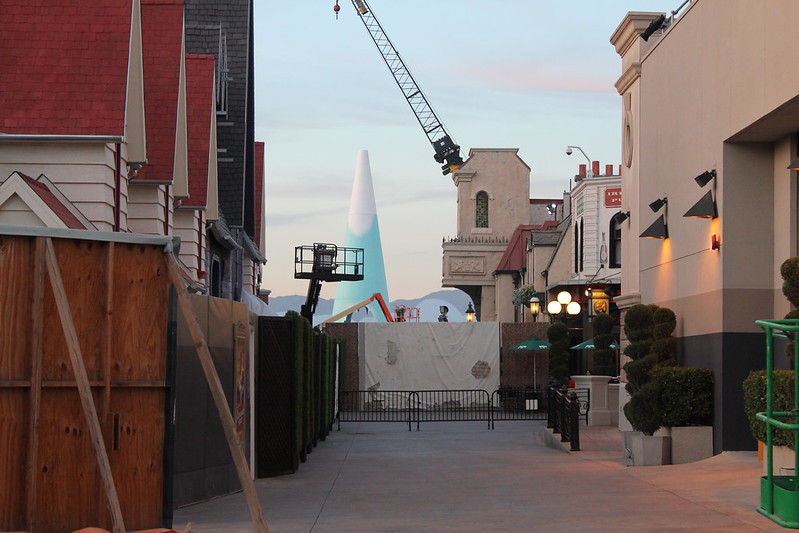 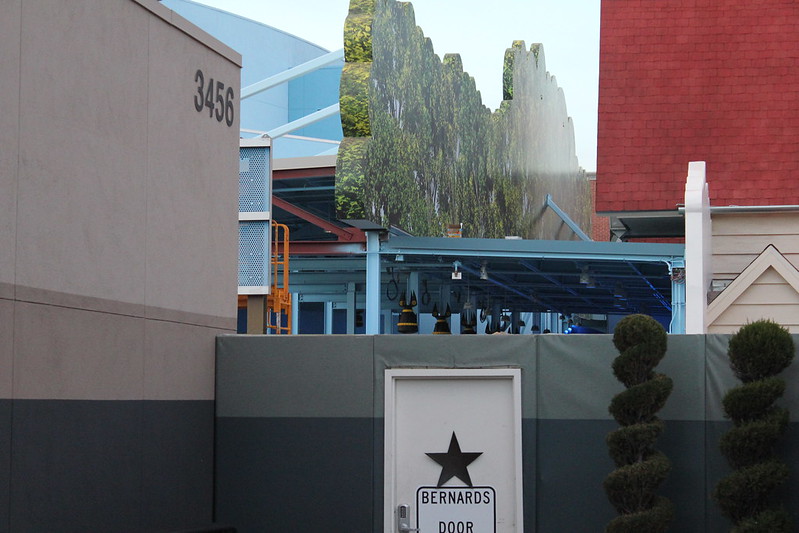 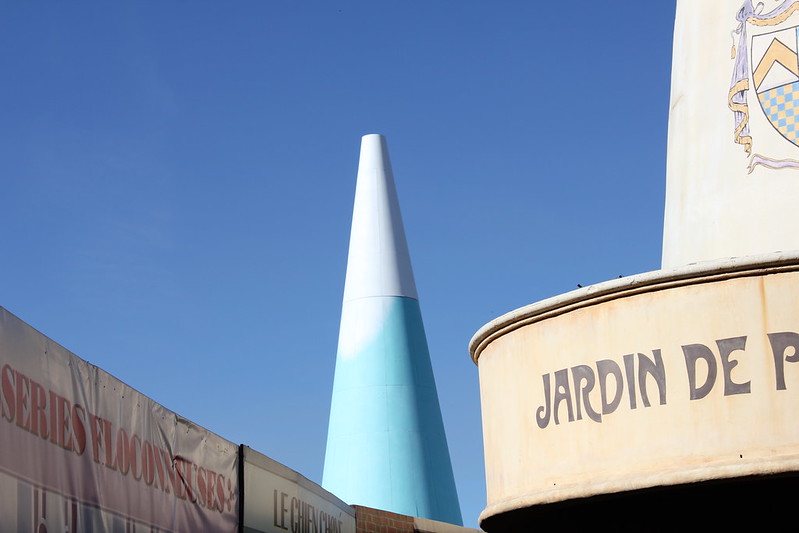 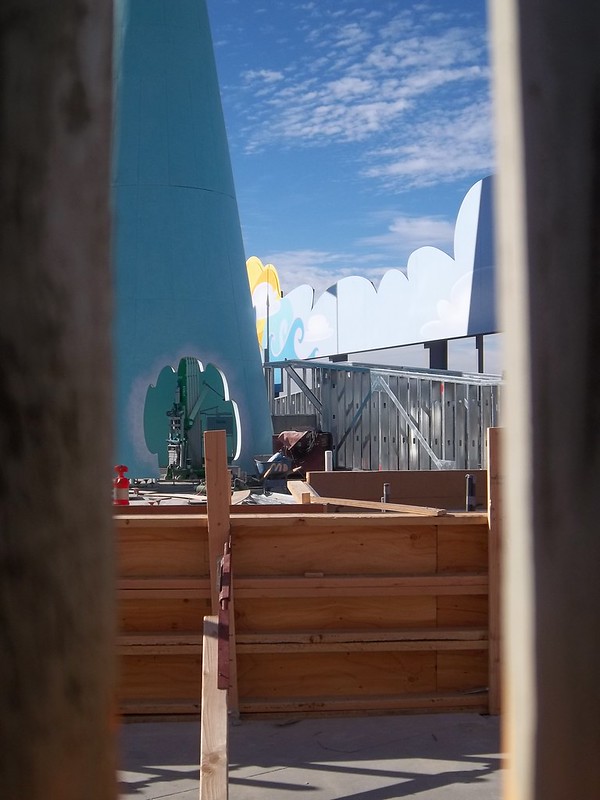 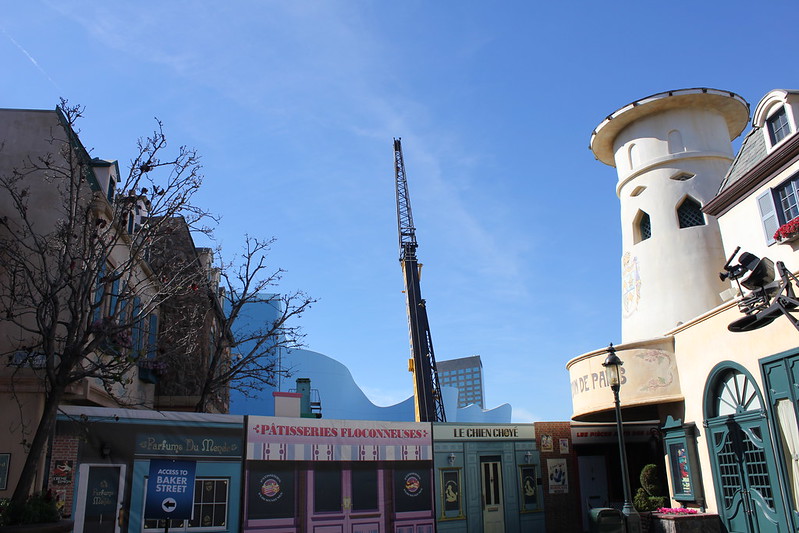 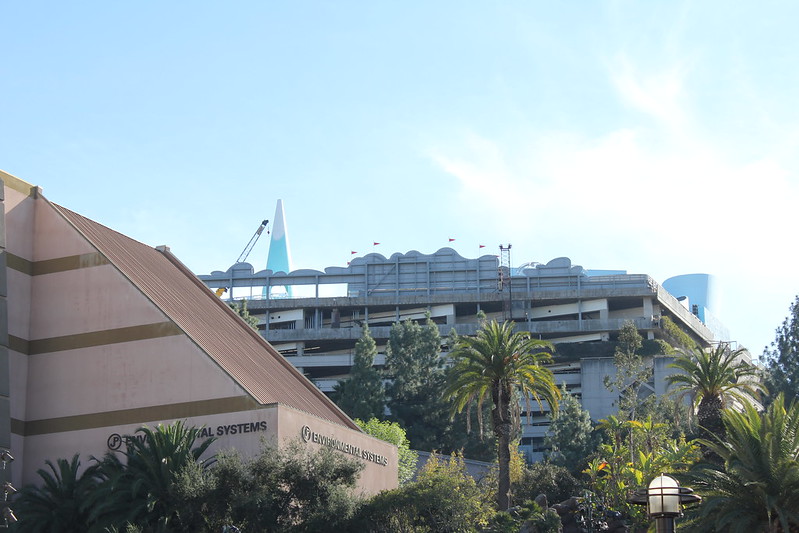 That’s the latest from Hollywood this time. Be sure to stick with us for ongoing coverage of the changes to the park, including the opening of Minion Mayhem this April. Thank you for making us your source for all things Universal Studios Hollywood, and as always, thank you for reading!