In other words, you’ll get the opportunity to drive really, really fast.

Since there hasn’t been a comprehensive article that discusses what an attraction of this caliber could entail, we thought we’d be among the first with our own analysis. Of course, being that Universal hasn’t released any definite plans or details on Fast and Furious: Supercharged, it’s best that you don’t interpret these predictions as a concrete set of plans.

With that in mind, let’s get started.

First off, you might have noticed that we’ve sectioned off Fast and Furious into four distinct sections. I’ll explain what each section represents in a bit, but let me explain the notion behind these divisions.

Unlike King Kong 360 – 3D which is cut into two sections – the waiting room and main show – we’re predicting that Fast and Furious will include three distinct experiences alongside one waiting room for a standby tram. The overall experience will include a mix of practical and visual effects, and each section will emphasize either a practical or visual element.

As for the building? It’s more expansive than one could imagine. Think King Kong, but longer. Significantly longer. As construction has already shown, the entire animation takes the length of Falls Lake, and it’ll be capable of holding multiple trams in multiple rooms. Whether or not the animation will be able to accommodate more than one tram at once in each individual room has not been determined, but think of multiple sections with multiple experiences instead of the singular-nature of Earthquake, Flash Flood and Jaws.

Now, on to the sections…

As I mentioned above, we’ll be dividing the show building into four sections – including an area for standby trams.

As such, section one could mimic the darkened waiting room from King Kong, or it could include something a bit more elaborate. Regardless of what this room will bring, we’re predicting it won’t be much, and it’ll simply be a holding area for trams.

Moving on to more exciting things…

Here’s where things get interesting. While Universal has already noted that the bulk of Fast and Furious will involve an expansive screen similar to King Kong, they haven’t explicitly mentioned a preshow experience. This could be the key differentiator between this animation and King Kong.

Unlike Kong which is unapologetically screen-based, Fast and Furious – we’re predicting – could start with a room filled with practical effects. Think of the Casa Della Tires scene from Disney California Adventure’s Radiator Springs Racer (pictured below). The Fast and Furious crew could transform each individual tram into a race-ready vehicle as you and your fellow guests prepare to race in the next scene.

Each tram could receive new tires, a new paint job and perhaps a new engine as the cast from the Fast and Furious films narrate the procedure.

This section could also be home to the new front projection system that Universal touted in their original press release back in April, though we’re guessing the park may want to save that technology for the main action in section three.

Section three – the bread and butter of this attraction. 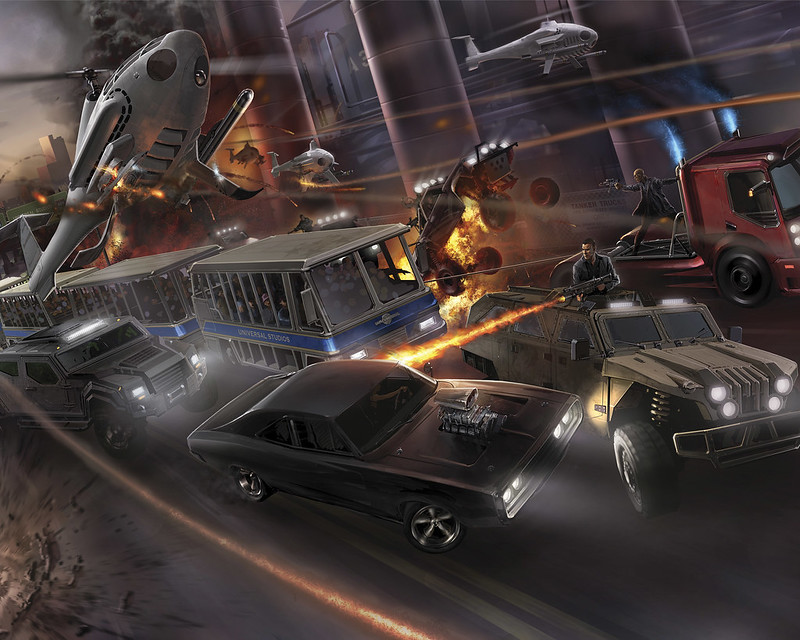 Similar to King Kong, Fast and Furious will feature a nearly 400-foot long screen that encompasses the tram from all sides. It will include, as Universal notes, 18 4K projectors and a “never-before-used-front-projection system”. For those that think the term “front projection” simply means a projector placed in front of the screen (compared to rear projection, which features the projector in the back), think again.

The front projection effect is essentially a visual effect used to place live-action in front of a recorded screen. In other words, think of a real-life vehicle “driving” in front of a recorded backdrop, combing a practical effect (the vehicle) alongside a visual screen. While Universal touts this as a first in the theme park environment, the effect has apparently been a tried-and-true technique used in film production. Wikipedia has an excellent article on the subject for those that are interested in how the effect is used.

Now, what could the live action effect be? If Universal’s previous endeavors are any indication, it could include the use of Kuka arms, though we’re not entirely sure of the use-case here. Regardless, it’s probably not going to be an exact duplication of King Kong since Universal seems cognizant of the fact that two screen based attractions could be a bit much – even for the average guest.

…and finally, section four, or the final act. If you recall the finale scene of Transformers: The Ride – 3D with the large practical Megatron overhead, we’re guessing that something similar could be in play here. 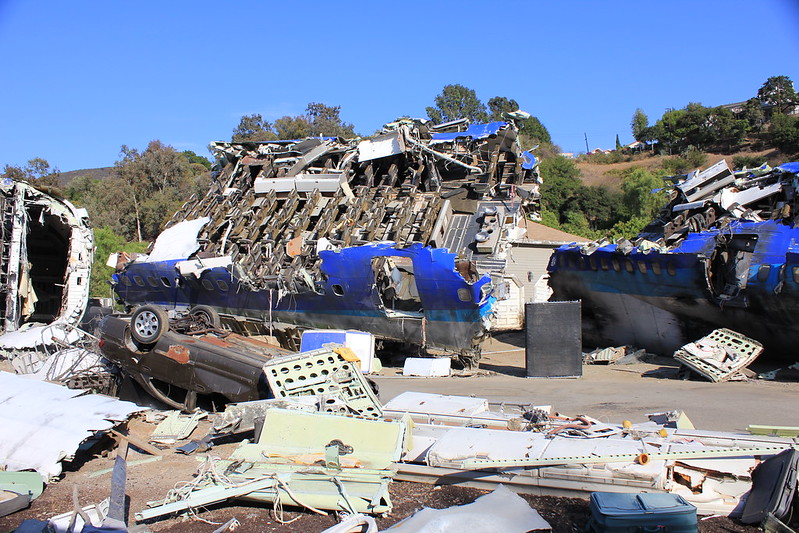 Think of the tram driving through the finale, but in practical form. This could include the remains of a brutal crash site, or the wrecked vehicle of your competitor. Whatever it is, this is where the main show will end and it’ll include a transition unlike the abrupt ending of Kong.

One last thing: Universal did note that the attraction will feature prop cars that will enhance the story, so if they’re planning to relocate some of the picture cars, it could go here. But section one may ultimately be the more logical home for the picture cars.

So that’s our prediction. Four distinct areas – three show rooms, and one waiting room and a mix of practical and visual effects. There’s definitely some ambition involved in our premise, but nothing too out of the question (at least, in our opinion).

It’s also probably important to note that King Kong will probably get an upgrade in the near future, since it seems highly unlikely that Universal would want guests to hold onto two pairs of 3D glasses. That being said, maybe that will be their approach moving forward.