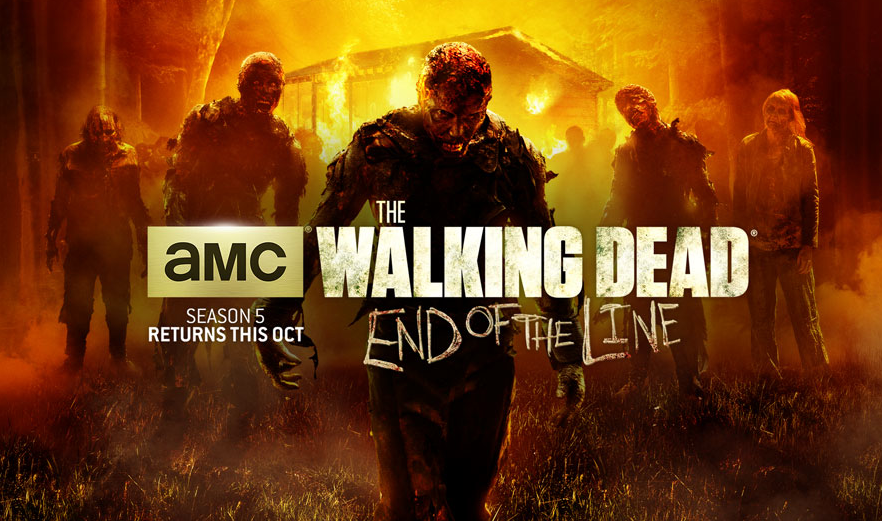 Universal Orlando Resort is bringing back AMC’s “The Walking Dead” to Halloween Horror Nights for an unprecedented third consecutive year. The all-new terrifying maze will be inspired by Season 4 of the critically-acclaimed, Emmy Award-winning television series.

The uber-popular property first joined the line-up of Halloween Horror Nights in 2012 as a stand-alone house based on Seasons 1 & 2. Last year, the whole event was centered around Walkers; with the streets overrun with famous locations and culminated on a haunted house based on Season 3’s prison setting.

This year, the maze will place guests at the heart of a harrowing journey to seek sanctuary at Terminus, an elusive destination that promises community for all. Just like Season 4, the house will send guests through the West Georgia Correctional Facility, now overrun by savage walkers, into unknown territory as they once again stage a desperate battle for survival against flesh-eating walkers and ruthless humans.

“The Walking Dead” is based on the graphic novel written by Robert Kirkman and published by Image Comics. The series tells the story of the months and years after a zombie apocalypse.  It follows a group of survivors, led by sheriff Rick Grimes, who travel in search of a safe and secure home. “The Walking Dead” is the number-one show on television for adults 18-49.  AMC’s “The Walking Dead” returns for Season 5 this October.

“This has been an incredible collaboration and I am thrilled to be working once again with the creative teams at Universal Orlando and Universal Studios Hollywood to bring the world of ‘The Walking Dead’ to our dedicated fans,” said Greg Nicotero, Executive Producer and Special Effect Makeup Supervisor for the series.  “I can’t wait for visitors to experience first-hand some of the iconic moments from Season 4 in what will be the biggest, most exciting and frightening ‘Walking Dead’ maze to date.”

Fans will be thrilled to hear that this year’s maze will be the largest maze ever created at Halloween Horror Nights.

Plans call for the house to be double the experience and will feature more scareactors in one single haunted house than ever before. Guests will encounter iconic scenes from Season 4 of the hit show – beginning at the prison, fans will enter the cell block where the infection began, escape into the massive Big Spot location with a crashed helicopter ripping through its ceiling and journey to the dilapidated country club overrun with walkers. These and other incredibly immersive environments culminate to the maze’s finale taking you to the End of the Line – Terminus. This year’s maze will be an entirely new experience, featuring never-before–seen walkers and brand new scares.

However, this year the horror property will be confined to just this maze. Some fans felt last year’s event suffered through “walker-fatigue”, especially throughout the streets.

“Bringing a horror property back for a third year in a row is always a decision that is carefully considered. Fortunately, The Walking Dead is unlike any horror brand around. Its appeal spreads across so many types of viewers. Hardcore and casual horror fans alike are watching week after week, and season 4 offered many new and unique environments and walkers,” said Michael Aiello, Creative Development Director  for Universal Orlando’s Entertainment team. “This year, we are taking this partnership to the next level, with a monstrous soundstage maze and a scope that is bigger and badder than anything we’ve ever done in the history of our event.”

Universal Studios’ “Halloween Horror Nights” events have a more than 20-year history of creating incredibly entertaining, horrifying Halloween experiences that are consistently rated the nation’s best. The event features highly-themed, disturbingly real, haunted mazes based on everything from films to nightmares – and streets filled with hundreds of specially trained “scareactors.”

Event nights are as follows:

Ticket packages and more information about the event will be released soon. Visit www.HalloweenHorrorNights.com for updates on Halloween Horror Nights 24.

In the mean time, stay tuned to Orlando United for more Horror Night goodness sure to come and make sure you share your thoughts on our forums.