June 9, 2014 – On Sunday, Universal held a special showing of WaterWorld exclusively for Annual Passholders and their invited guests. The event was an effort to showcase the changes that have come to the show following the recent changes in management, show plot, stunts and special effects.

As guests were ushered into the seating area, two video monitors were on display inside of Gregor’s tower, showing time-lapse videos of various construction projects done to the set during the recent refurbishment. Once inside, there were large poster boards on easels displaying photographs of both construction projects and new additions to the set. The normal preshow activities began, as usual, and the easels were moved just before the show started. 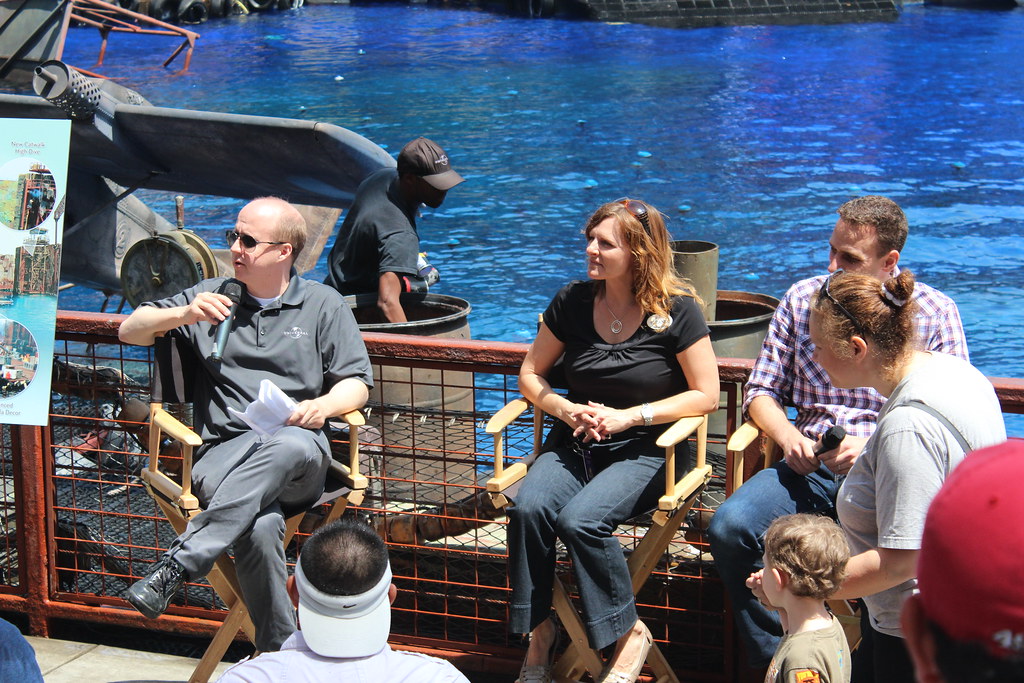 The show went on very smoothly with little to no flaws and was met with an excellent reaction from the crowd. Following the main show, annual pass holders were instructed to gather in the center seating area from key management members and members from the cast. The easels were brought back out, and six chairs were placed in front of the center section of seating.

Director of Entertainment, Benjamin Salisbury, came out accompanied by two key members of WaterWorld management alongside Lon Gowan (as Sage), Brittany Servidio (as Helen), and the Greg Dolph (as the Deacon).

Management explained that after nearly 20 years of operation, it was time to “recharge” WaterWorld and breathe some new life into the show, dubbing the newest incarnation “WaterWorld 2.0” due to all of the changes. It was also mentioned that they wanted to try to bring the audience closer to the show by introducing more interactivity. Examples of this include the character of Sage walking through the seats in addition to the new high fall that occurs to the right of the atoll gate. 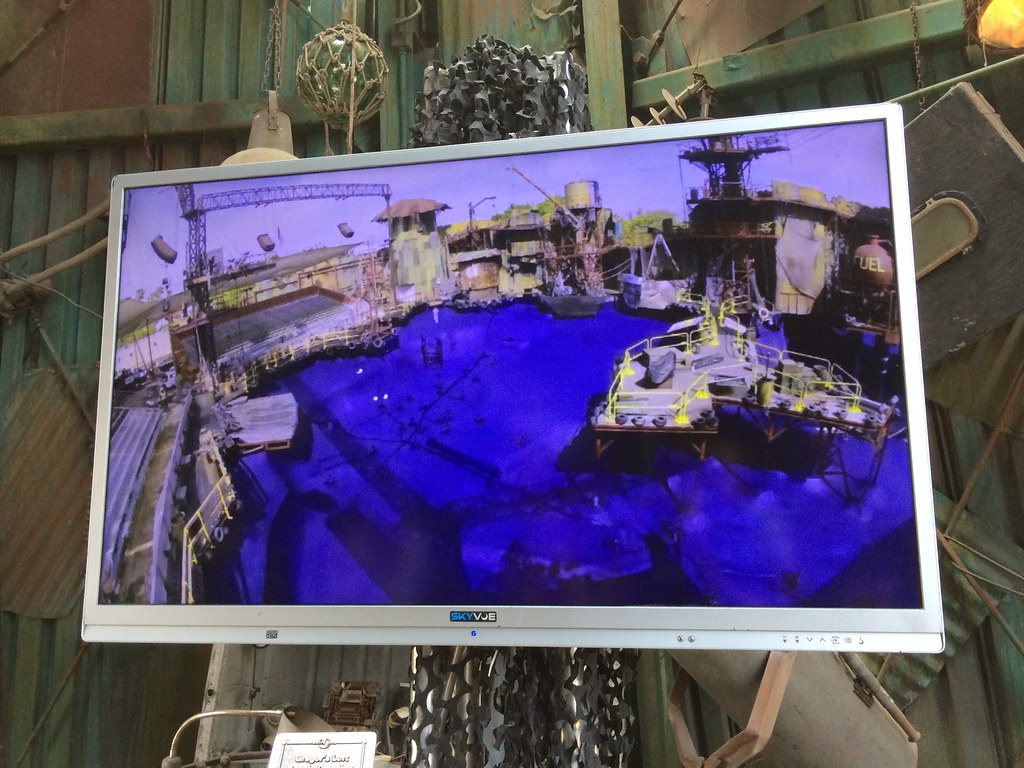 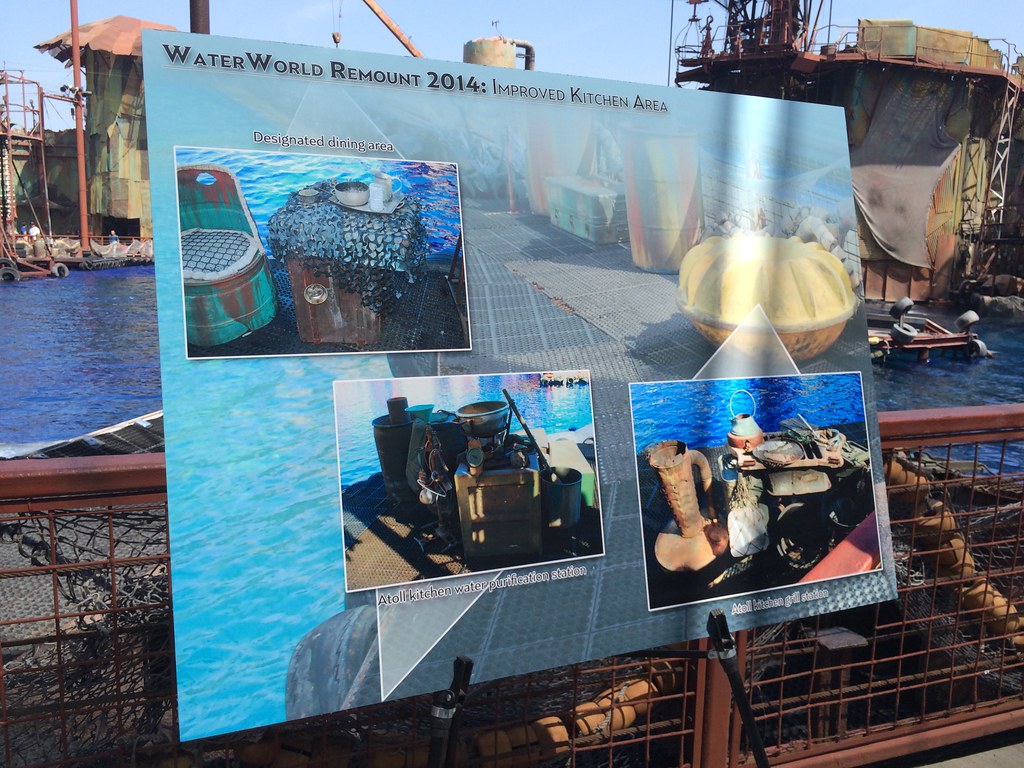 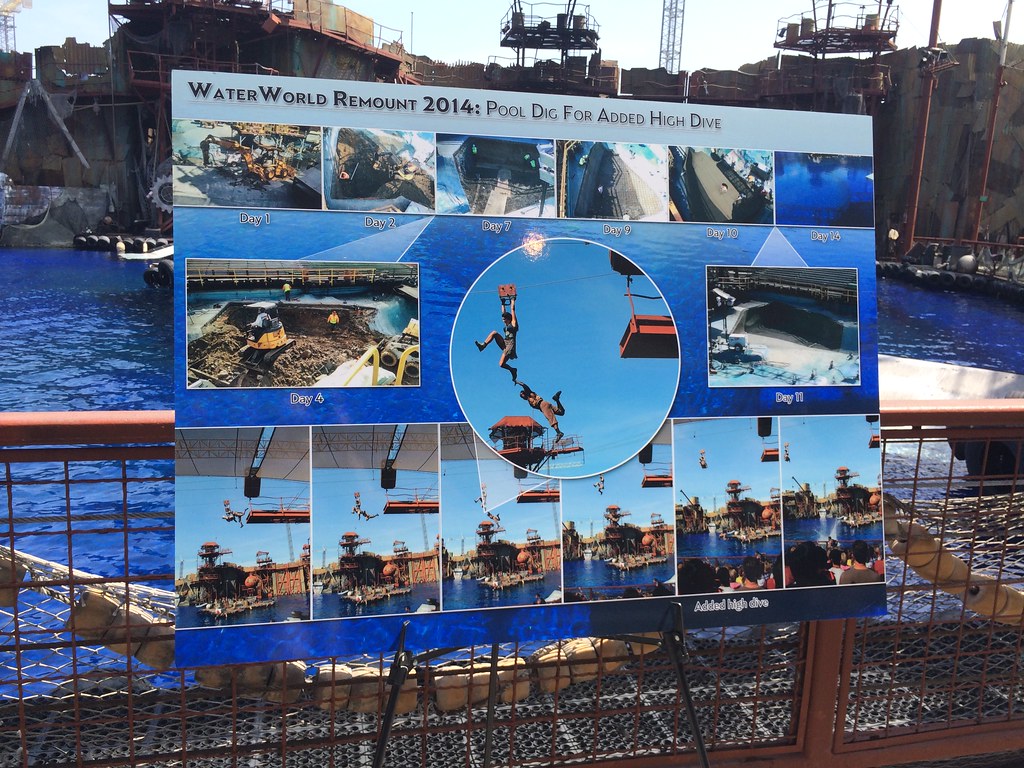 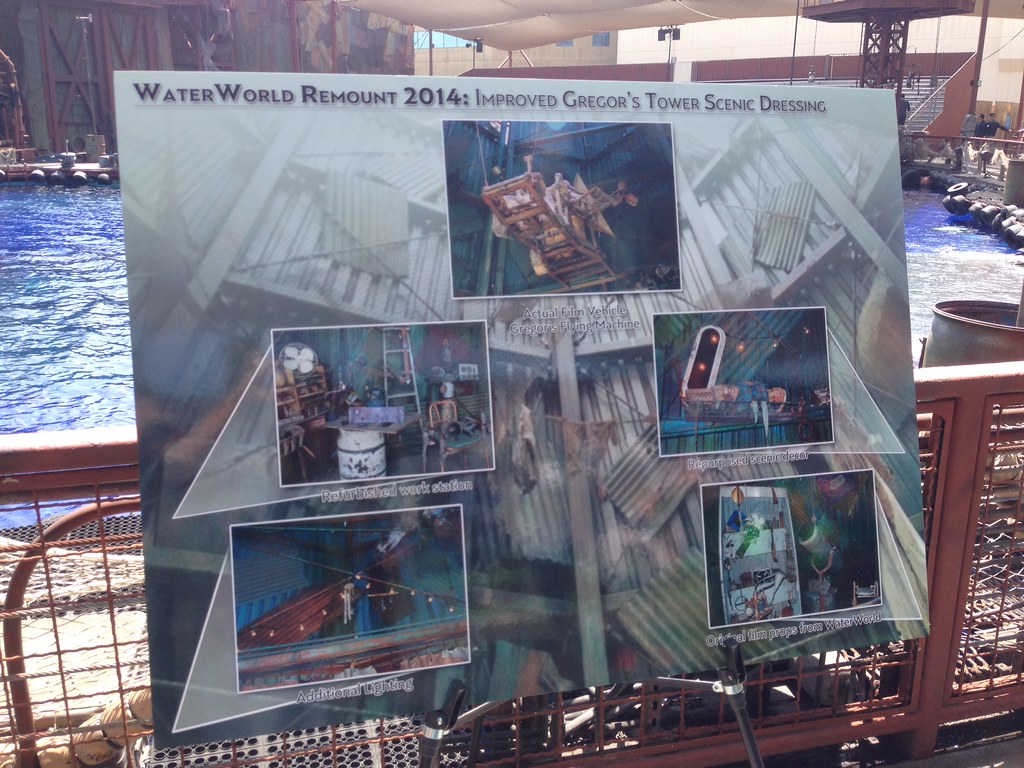 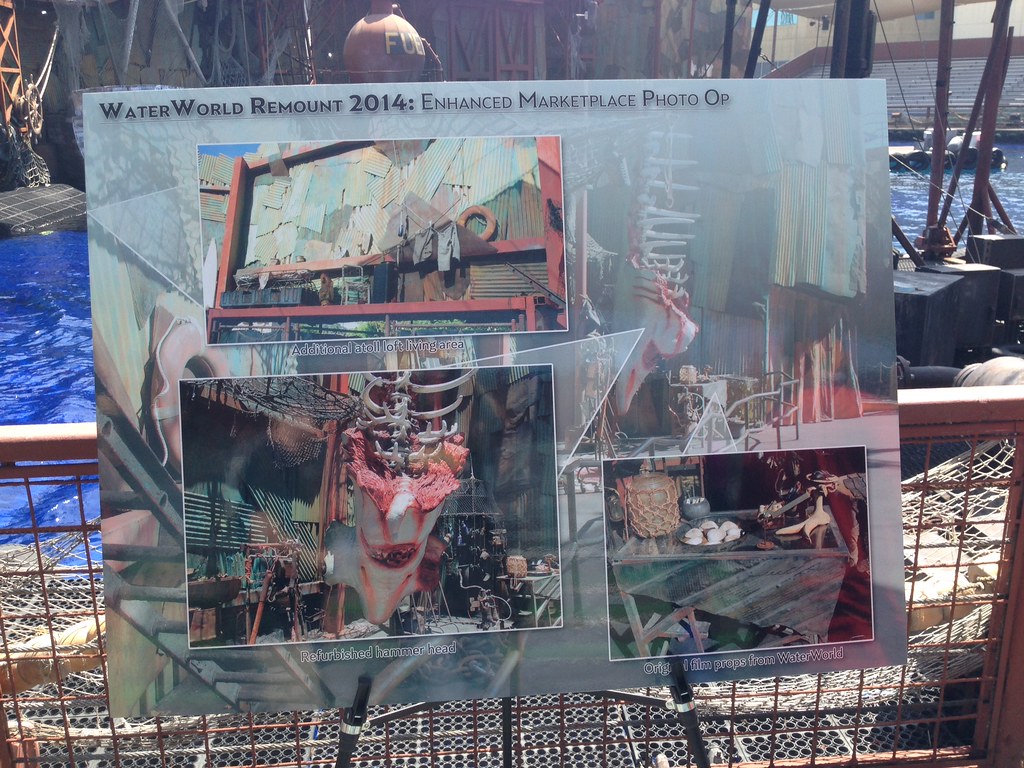 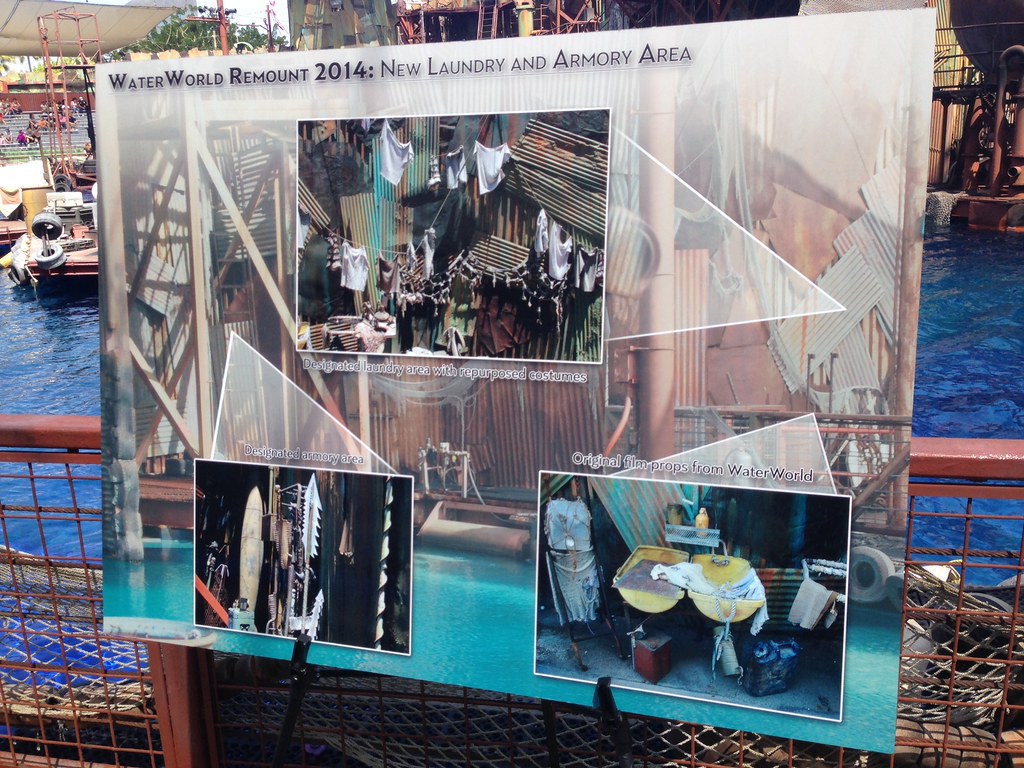 Following a bit of contextual information, each cast member also gave a small biographic introduction about their work in the film industry and their connection with Universal. It was noted that Lon Gowan has been with Universal since 1991 and that Greg Dolph was the first Deacon to ever perform for a paying audience. Similarly, Brittany Servidio – the newest cast member of the three – came from a dance background. As the cast explained, each performer has a specialized skill that they bring to the show, with peripheral skills (such as the fight sequences) added on as they go accustomed to the show’s plot.

Annual pass holders also learned that building a “pool within in a pool” was perhaps the most challenging aspect of the recent refurbishment. In order to accommodate the new high fall effect in the center of the arena, Universal had to dig – making that specific area deeper to accommodate the new stunt. Engineering teams had to research what was under the current cement in order to safely deepen the pool, seeing how the area hadn’t been modified since the days of Miami Vice. In addition, while the question and answer session was held, guests also got to witness the Sea Plane being reset during the presentation – a nice treat for those who have never witnessed WaterWorld resetting.

When the presentation was finished, guests were invited up to ask questions, talk or take photos with the cast and crew. Individuals were invited to take more extensive looks at the posters that displayed the changes that had occurred.

It was good to see and hear Universal repeatedly acknowledge their gratitude for both fans of the show and annual passholders. Hopefully WaterWorld’s recent annual pass event signals additional perks in the future.