Editor’s note: As Halloween Horror Nights 2014 continues, Inside Universal will be offering a comprehensive overview of the entire event categorized into three sections: the Upper Lot, the Lower Lot and the backlot experiences. Of course, given the nature of reviews, this article will contain spoilers.

For spoiler-free advice on planning, please be sure to read our Survival Guide, First Stab/Early Entry article and VIP Experience review for a complete overview of this year’s event. 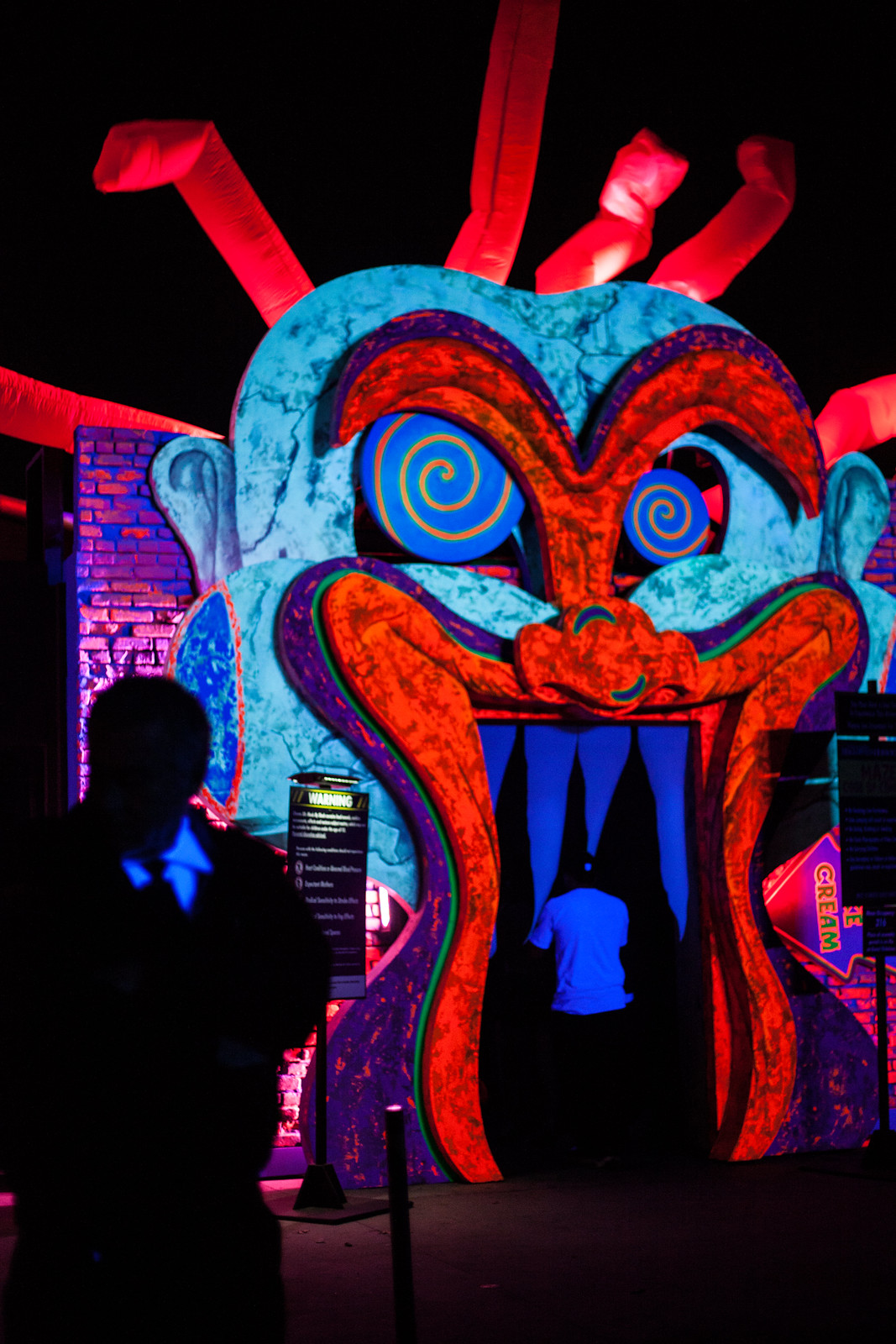 The premise is this: Sweet Licks – your host for the evening – is the demented owner of an Ice Cream factory run by a murderous group of psychotic clowns. Of course, Slash’s macabre music – as evidenced by the corporate sounding title Clowns 3D Music by Slash – playing in the background. Did we mention that Slash is featured in this maze?

With a fanciful clownish backdrop filled with giant air puppets as this maze’s exterior, guests enter through a clown’s mouth and into a carnival-esque hallway filled with reflective mirrors that light up with killer clowns. What is real and what is portrait? That’s for you to find out, of course.

After you’ve escaped through the hallway of fun, you enter into a graphic scene where a couple of Sweet Licks friends have gone on a killing spree directly in front of the Frozen Clown Pops factory. The scent of strong peppermint wafts through the room and you see what Sweet Licks has in store for his victims. From Blooderscotch to his Gory Fudge Glory, the fear you may become one of his next experiments begins to set in. 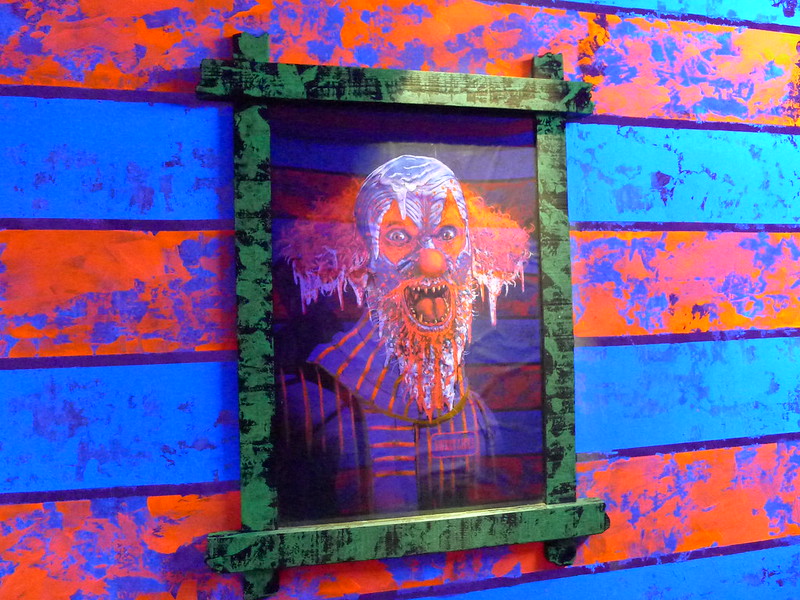 From there you enter the freezer where a pair of clowns are watching over the victims that are waiting to be turned into one of the new flavors of ice cream. Cold air is pumped through the room to create the proper setting as familiar panels line the room.

Then you enter the most disgusting part of the maze – the bathroom jail scene, which features several static characters either throwing up or completely over eating what looks to be Fruit Loops. To make matters worse, a nauseating scent is pumped throughout this room – one of John Murdy’s more gruesome trademarks.

The next room features a dark cavernous setting, allowing the 3D effect to be used to its fullest potential. Scare actors – cleverly hidden within the room’s wall – blend in well with the room’s décor, creating a sense of uneasiness since you’re never quite sure where they will pop out. This is a technique that’s been used in the past, but it’s especially effective here with bright LEDs providing a substantial source of disorientation. 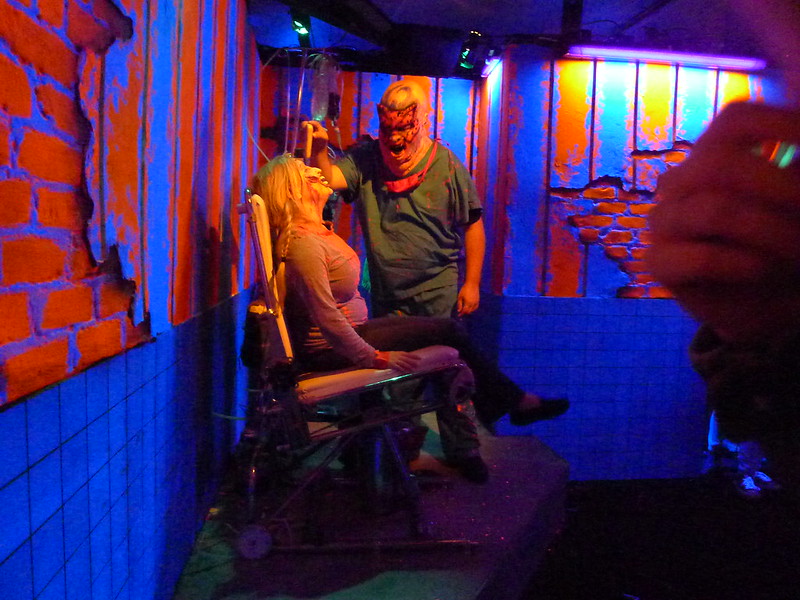 Finally, the finale of Clowns reuses a gimmick that is used in four of the seven mazes at this year’s event, with an automated car that blasts a horn and comes towards you in a sudden fashion. It’s an effective scare technique, but it becomes predictable when overused.

Out of all of the mazes at this year’s event, this one probably featured the most reused set pieces and props from previous years. While some degree of rehashing is expected (and certainly reasonable given the constraints of Halloween Horror Nights), it seemed especially evident here – with numerous walls borrowed from Alice Cooper and Black Sabbath.

Slash – the main draw to Clowns 3D – also appeared to be underused. Music throughout the maze appeared in the foreground, never making a forefront appearance in any specific scene.

Clowns 3D Music by Slash is a fun maze by all accounts, but we don’t recommend hitting this one if you’re pressed for time on the backlot.

Based off of the 1981 Academy Award winning film, An American Werewolf in London has finally come to Hollywood after debuting in Orlando’s haunt last year. A cult classic, the John Landis film is known for its incredible transformation scene and amazing special effects. Luckily enough, Hollywood’s take on this maze lives up to the hype and gives fans a reason not only enjoy the maze for its scares, but to also be in awe of its amazing puppets and animatronics. 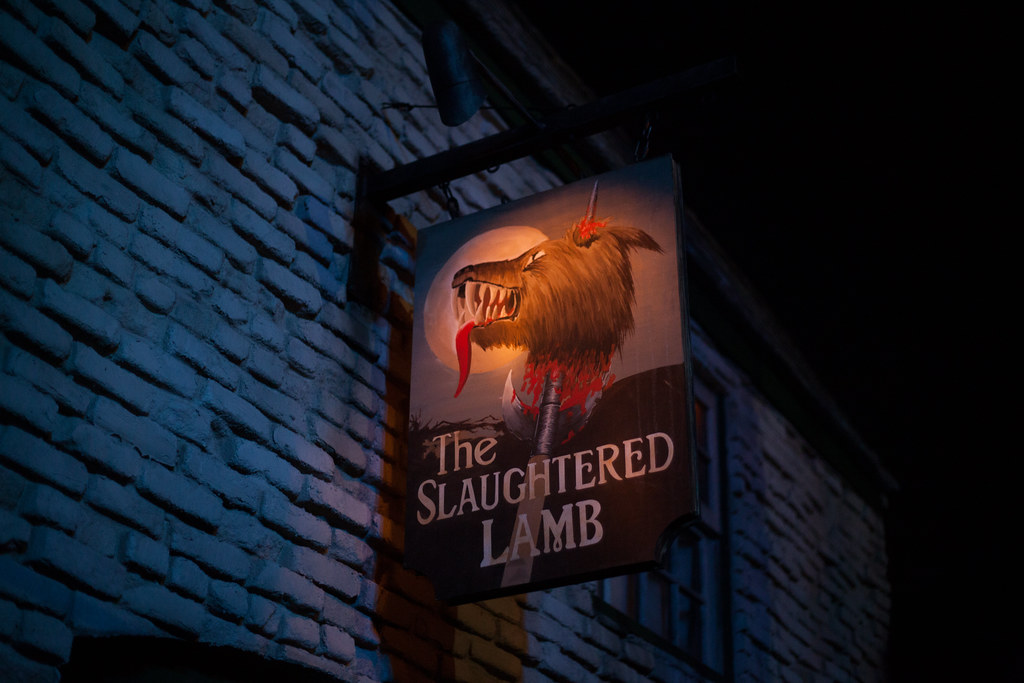 The opening scene for the maze features the infamous Slaughtered Lamb where the main character and his friend leave to walk through the woods. As you begin to pull the corner, you’ll see that David is being held and his nightmares have come to reality as you are under attack by deformed Nazis under a splendid ball of hellfire.

As you continue on your path to escape the terrors, you enter the transformation scene that recreates Rick Baker’s Academy Award winning scene from the titular film. In it, you’ll find David beginning his painful transformation from man into werewolf. With the clever use of an actor and his prop, this legendary scene is recreated with exceptional realism. As your terror-filled journey continues, you enter a series of rooms to which you encounter many werewolves just waiting to attack from different angles.

Making your way through, you enter a hallway that features the ever-present object-coming-towards-you trick – this time with a train coming towards you with a loud thunderous noise. Dependent upon your progress so far within Halloween Horror Nights, this trick may scare you or you may consider this old hat, allowing you to continue on your way.

After you leave the train station, another impressive animatronic werewolf greets you as you make your way into the movie theater – a scene has been used in the past with various mazes. With dead bodies or Scareactors on both sides of the aisles, you’re never too sure who is real or not.

Once you’ve left the theater, you go through two dark corridors with werewolves ready to attack and then you exit the maze. They’re both surprisingly large and realistic, and they’re very effective. Suffice to say, the werewolves are among the most impressive figures at this year’s event.

In all, An American Werewolf in London was an extremely well done maze. The puppets and animatronics are top notch (as to be expected), and we recommend making this maze a priority for when you attend Halloween Horror Nights.

Skullz features four actors on stilts walking around the Lower Lot. That’s it. 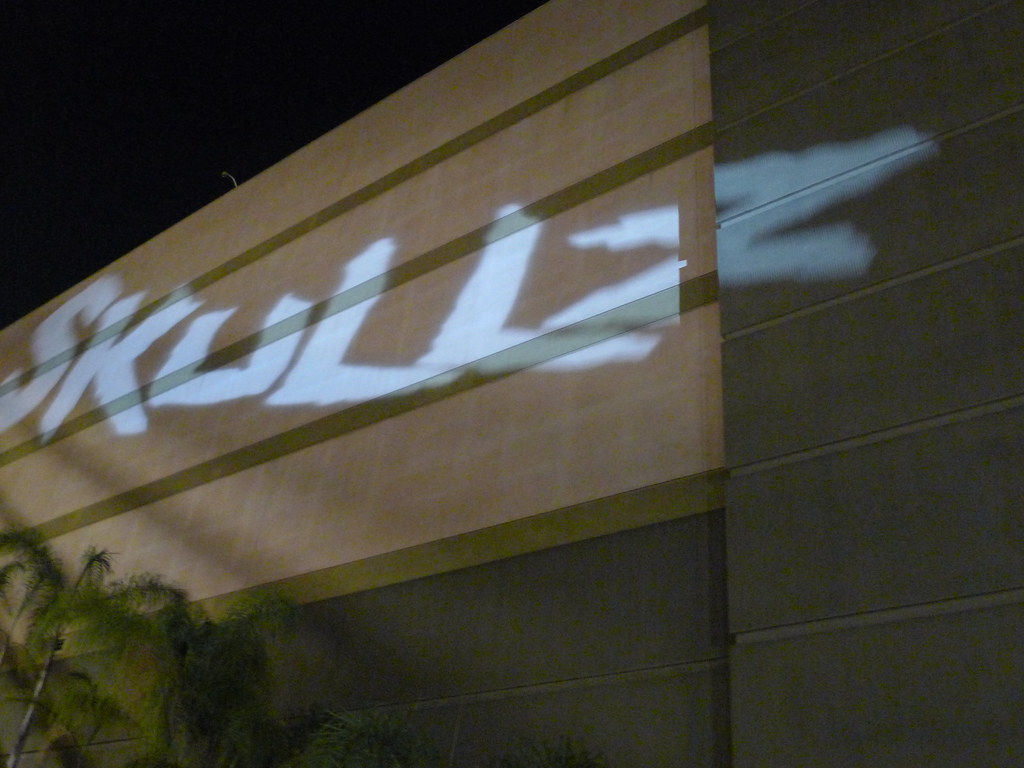 Now granted, there’s not exactly much that one could do given the congestion of the area, and the actors should be commended for not whacking guests in the face with the constant flurry of commotion.

That being said, perhaps the funds used to implement Skullz could be better used in another area of the park. It appears as if guests simply want to get in and out as quickly as possible when they’re on the Lower Lot, and who can exactly blame them? But then again, Skullz isn’t hurting anyone and they don’t exactly take away from the event. In any case, they’re just there.

Special thanks to Bernard Mesa for the use of his images.