Yesterday, Universal released information regarding the park’s plans to celebrate its 50th anniversary with three tent pole announcements: Fast & Furious: Supercharged, the Nighttime Studio tour and Springfield alongside some other smaller revelations.

While not entirely surprising or revealing to readers of Inside Universal, Universal’s announcement does clarify some of the park’s plans that have long been speculated by members of our community. 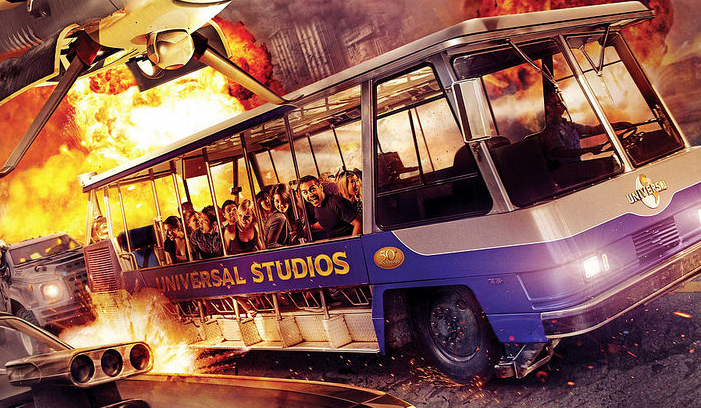 Starting out with a somewhat surprising announcement, Universal will apparently be debuting new trams in 2016. As the park notes:

“The “Glamour Trams” of yesteryear that gave way to today’s world-famous Studio Tour is undergoing a top to bottom makeover to coincide with the 50th anniversary, and by 2016, will roll out a fleet of new, contemporary trams, including the installation of ultra-comfy cushioned seats. A modern exterior and sleek logo design will contribute to the updated aesthetics of these iconic trams, while a new Art Deco-themed Studio Tour entry portal, located within the theme park, will greet guests.”

While we’ve long heard about the park’s plans to refurbish the existing fleet of trams, this press release suggests that Universal is pursuing a two-pronged long-term approach for the Studio Tour: refurbish the current fleet with a new livery commemorating the park’s 50th anniversary, followed by an entirely new fleet that will jumpstart the Studio Tour look for the next decade.

This is an interesting development for two reasons: one, it suggests that this year’s extensive modifications are only temporary, and two, Universal will be making a substantial investment for the next generation of Studio Tour trams that will pave the road for the next two decades. Indeed, the current Super Trams have been in use since 1983, marking almost 32 years of continuous service (in comparison, the Glamour Trams were only in service for 19 years, not counting their current status as the Universal City shuttle). While they’ve received extensive upgrades since (including a substantial audio visual upgrade in 2000), a new fleet suggests a radical new design that cannot be achieved with the current trams. 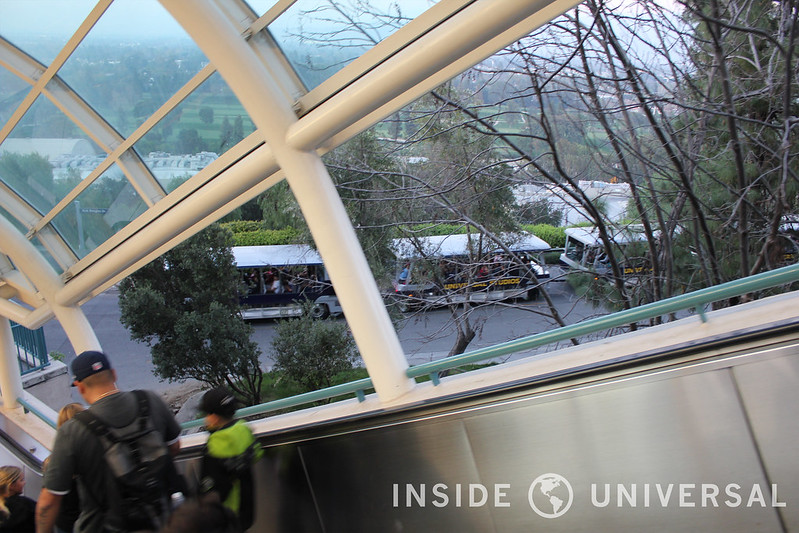 In the meantime, it’s been no secret that Winnebago – the manufacturer of the current trams – has been unwilling to provide support for the new changes, forcing Universal to perform some enhancements and changes in-house. While we have yet to sit in the new trams ourselves, readers have sent in emails suggesting new seats, clearer audio alongside a slightly new design in the refreshed Super Tram design. In terms of operation, we’ve also received note that the door mechanism is also easier to handle from a team member perspective.

Having said that, it’ll be interesting to see what Universal has in store for 2016. One has to hope the talk of a new fleet simply isn’t marketing speak for a revised design.

Meanwhile, on the Fast and Furious front:

“This gripping, technologically-advanced ride, inspired by Universal Pictures’ most successful film franchise of all time and featuring the film’s original cast members, will propel guests into the high-stakes underground world of fast cars and daring escapades traveling at accelerated speeds of up to 120 miles per hour. Situated within a newly constructed 65,000 square foot building on the legendary backlot, the high speed, 3D-HD ride will reunite stars from the Fast & Furious series – Vin Diesel (Dominic “Dom” Toretto), Dwayne Johnson (Luke Hobbs), Michelle Rodriguez (Letty Ortiz), Tyrese Gibson (Roman Pearce) and Luke Evans (Owen Shaw) – in a revolutionary mega-attraction, conceived as a new installment to the dynamic film series that can only be experienced at The Entertainment Capital of L.A.”

Ride nomenclature not withstanding, it is interesting to note that the Fast and Furious show building has seemingly grown from the originally announced 50,000 square-foot design to now 65,000 square feet – making it larger than Transformers: The Ride – 3D in terms of usable real-estate.

As Universal notes in their previous press release last year:

One has to assume that the attraction is literally bigger than we (and apparently Universal) had anticipated, though they could be simply revising as to what they include as part of the Fast and Furious structure. Other than that, not much has been revealed for the upcoming blockbuster tour animation. 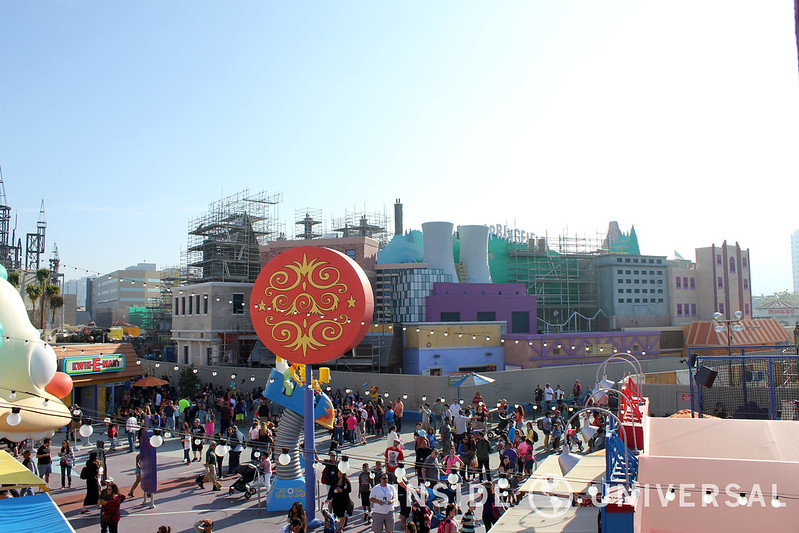 Heading over to Springfield:

“The layout of the park will become unrecognizable when “Springfield,” hometown of America’s favorite family, The Simpsons, breathes new life to the sprawling and vibrant space surrounding “The Simpsons Ride.” “Springfield” is designed to capture the spirit of the animated town and engage visitors and fans of the show in the intensely absorbing and colorful world made famous throughout the series’ record-setting 26 seasons.”

“Guests visiting “Springfield” will have the pleasant sensation of being hurled through their television sets and into the accurately depicted town, complete with signature eateries such as Krusty Burger, Cletus’ Chicken Shack, Luigi’s Pizza and Phineas Q. Butterfat’s Ice Cream Parlor, along with Homer’s favorite hangouts, Lard Lad Donuts, Moe’s Tavern and Duff Brewery.”

With a restaurant list mostly solidified, we now have an idea of what to expect for the bulk of Springfield’s offerings (though there is the curious omission of The Frying Dutchman and Bumblebee Man’s Taco Truck, which may have been excluded for numerous reasons).

Having said that, Springfield looks to be on track for a March soft opening and a finalized debut later this Spring, transforming the otherwise random nature of Simpsons Plaza into a small, cohesively themed land – much in the same vein as Despicable Me. 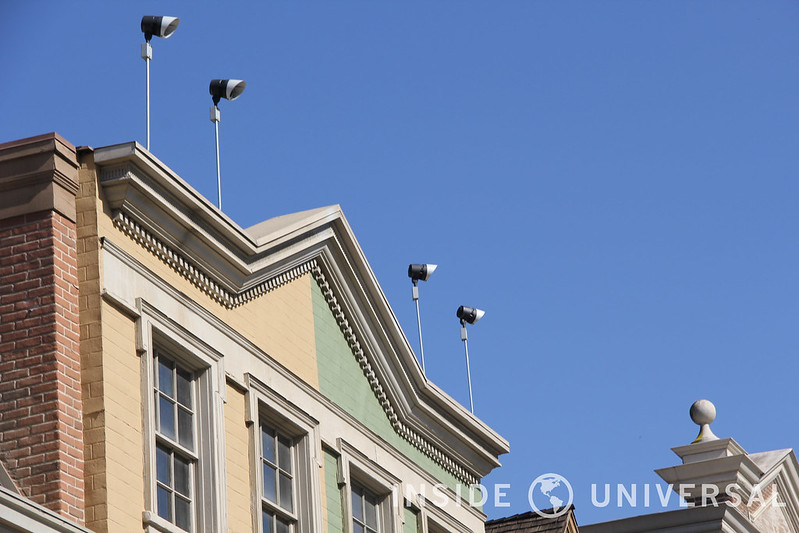 …and finally, Universal released some new information regarding the new nighttime Studio Tours.

“Universal’s slate of new 2015 attractions will entertain from sunup to sundown when the theme park broadens the scope of its popular Studio Tour with the introduction of a “Nighttime Studio Tour,” designed to enlighten guests on the art of moonlight movie-making.”

“Under a blanket of stars, over 20 locations along the famed Studio Tour route will showcase an array of luminous onset lighting and special effects used in nighttime production. Theatrical lighting will cast a glow on iconic backlot sets as Studio Tour guides shed light on Hollywood secrets and tricks of the world’s most glamorous trade, including how filmmakers create the effect of daylight amid the black of night. Celebrated stars who found fame on Universal’s backlot will also make cameo appearances on the “Nighttime Studio Tour,” including Marilyn Monroe, Norman Bates and Frankenstein. The “Nighttime Studio Tour” will run every weekend throughout the summer from July 4th through Labor Day.”

Among the more anticipated additions for fans, the nighttime Studio Tour will run on select (usually peak) days during the Summer with the possibility of extending into the future (given the installation of permanent lighting).

While the presser is light on specifics, it has long been expected that Universal will employ the use of projection mapping on some of Hollywood’s iconic facades – transforming these sets into large canvases.

Among the more surprising revelations has to be the use of live actors impersonating the likes of Marilyn Monroe, Normal Bates and Frankenstein on Universal’s famed backlot. If we had to wager a guess, Marilyn Monroe’s bit will probably take place in the Metropolitan sets, Norm Bates in the Psycho House and Frankenstein within in the Court of Miracles. Such events will coincide with the studio’s recent effort to revitalize and refurbish portions of the backlot – including the dilapidated Psycho House.

And while fans have lamented over the exclusion of Back to the Future and Courthouse Square, we have to revert back to the press release and stress Universal’s mention of “over 20 locations” being included on the nighttime tours. Our recent photo update has indicated the installation of LED lights in Courthouse Square, so fans shouldn’t fret until the final product is revealed.

In short, despite the park’s liberal interpretation of the 50th anniversary date (SpectraBlast opened in 1994 commemorating the park’s 30th anniversary, making 2014 the true 50th anniversary), Universal is owed a bit of sympathy given last year’s monstrous construction wave. After all, it’s not everyday a theme park practically reinvents itself in preparation for a landmark attraction.

Indeed, given the announcements in store, Universal’s one-year delay may have paid off in the end.