April 19, 2015 – The Studio Tour has served as a Universal staple for over fifty years. Not only did the tour spawn the birth of Universal Studios Hollywood, but it also served (and still serves, to some extent) as the basis of inspiration for Universal parks all across the world. From the original giant animatronic King Kong, Earthquake and Jaws to the highly advanced and intricate King Kong 360 – 3D, the Studio Tour is the foundational heart and soul of Universal.

So of course, when Inside Universal heard that Universal was set to introduce a new set of trams in preparation for the park’s fiftieth anniversary, I was intrigued. After all, it’s not every day a park modifies its icon, and for many, the Studio Tour tram is just as symbolic as the tour itself. Frequent fans of the tour will recognize the tram’s role as a picture car in a number of films and television shows, including The Nude Bomb, CSI, The A-Team, Bones and even South Park among many others. And aside from a few changes (including the transition from Glamour Trams to the wide-body Super Trams in 1983, and the addition of a new audio/video system in 2000), the tram has mostly stayed true to its 1964 roots.

Thus, it may not serve as much surprise when I reveal that the new trams (which I’ll refer to as Universal’s 50th tram) largely stay true to the status quo. Save for a few internal modifications, the new 50th trams sport the same audio and video system, same seating layout and same lighting fixtures as Universal’s last tram iteration in 2009. What has changed, however, are the seats themselves and the tram body’s new exterior paint scheme. 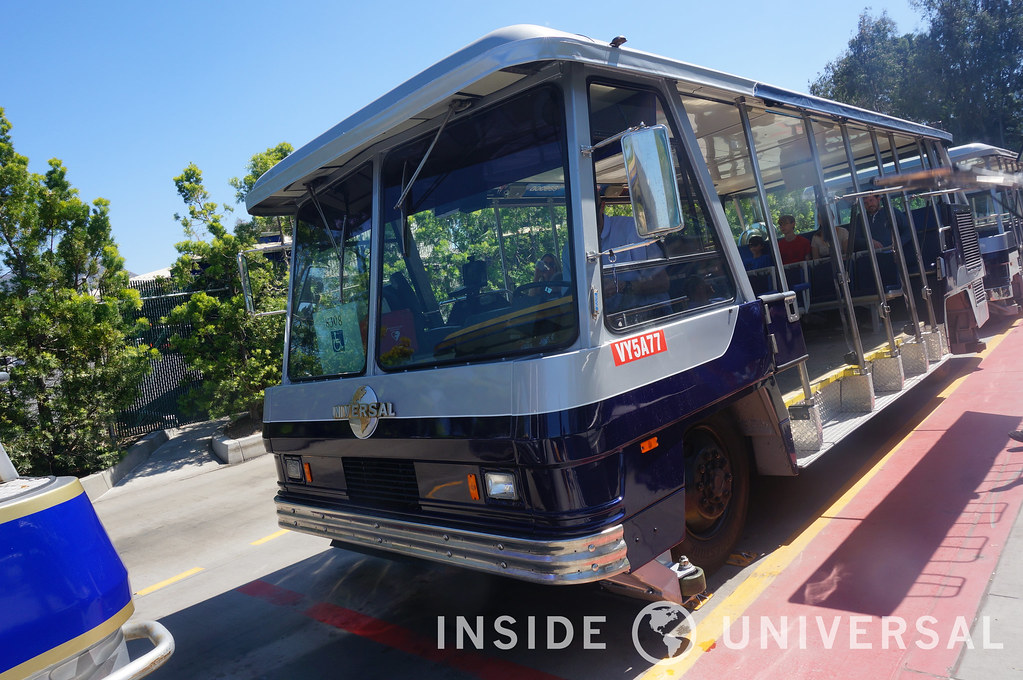 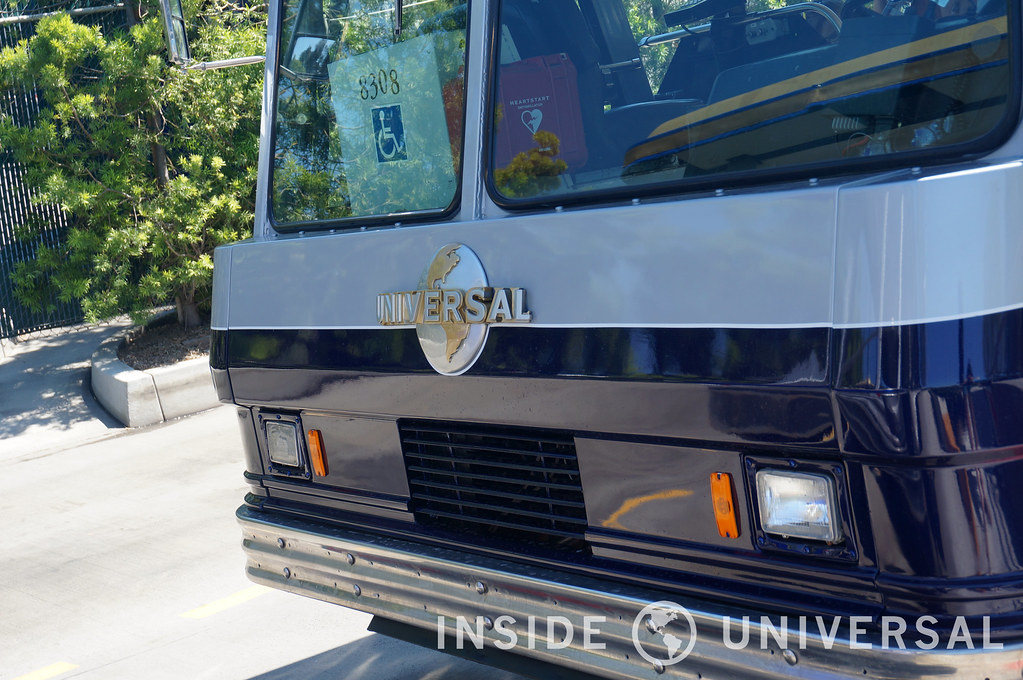 Gone are the star-laden blue and gold color scheme, and in its place, a new dark blue and gray look with white accents. It’s a nice progression, and the design looks far better in person than it does through photos. Indeed, the new solid-tone scheme has a nice understated quality to it, making the previous tram iteration look garish and overblown in comparison. Unfortunately, the old color scheme still permeates much of the tour – including sections that eventually lead to the tram. What remains to be seen is whether or not Universal will update the remainder of the Studio Tour, including the bridge and queue, with the new dark blue and gray look.

Structurally, the first car remains the same while the second, third and fourth cars have been completely rebuilt from the ground-up. After thirty years of continual service, the original Super Tram carriages became badly worn, and Universal pursued its own in-house solution based on Winnebago’s original design. While much of the aesthetics remain the same and unnoticeable to the average guest, the new structural changes have introduced an easier door mechanism for Studio Tour ambassadors and new LED brake lights on the back trams – improving the functional aspects of an otherwise old design. The modified second car with the windows to block out the exhaust have also been removed in lieu of the tram’s eco-friendly engines, allowing guests in the front seat a clearer view of the backlot. 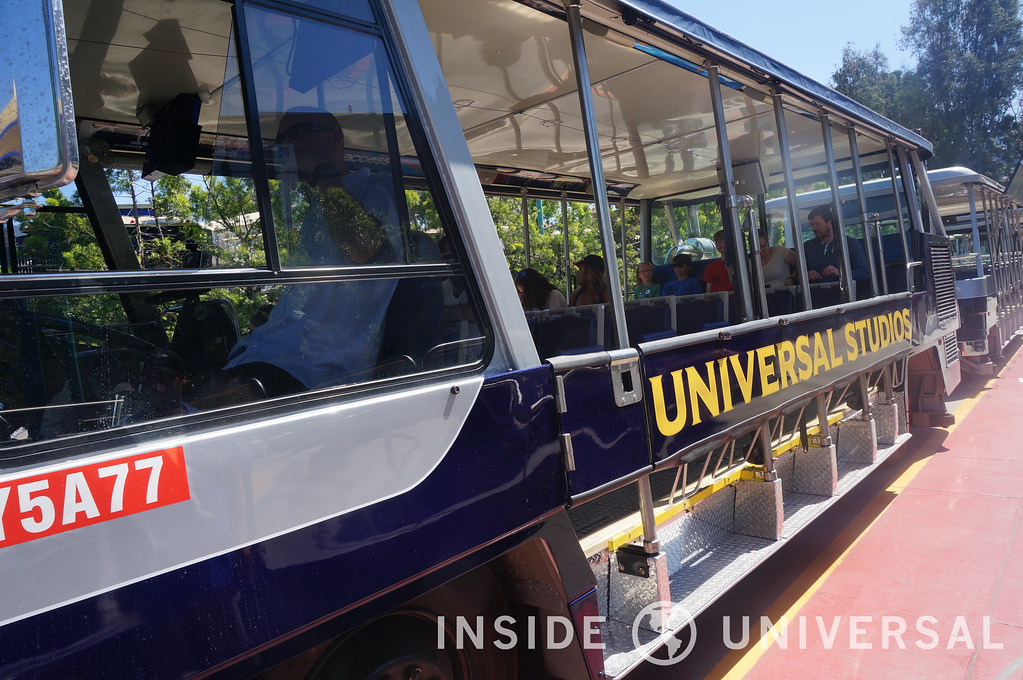 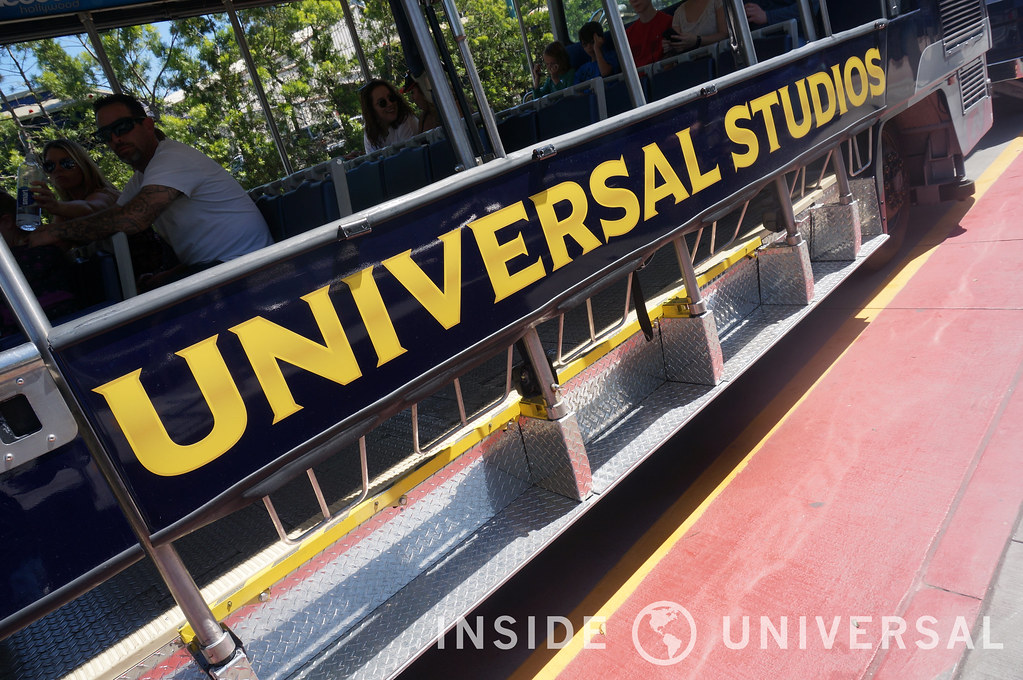 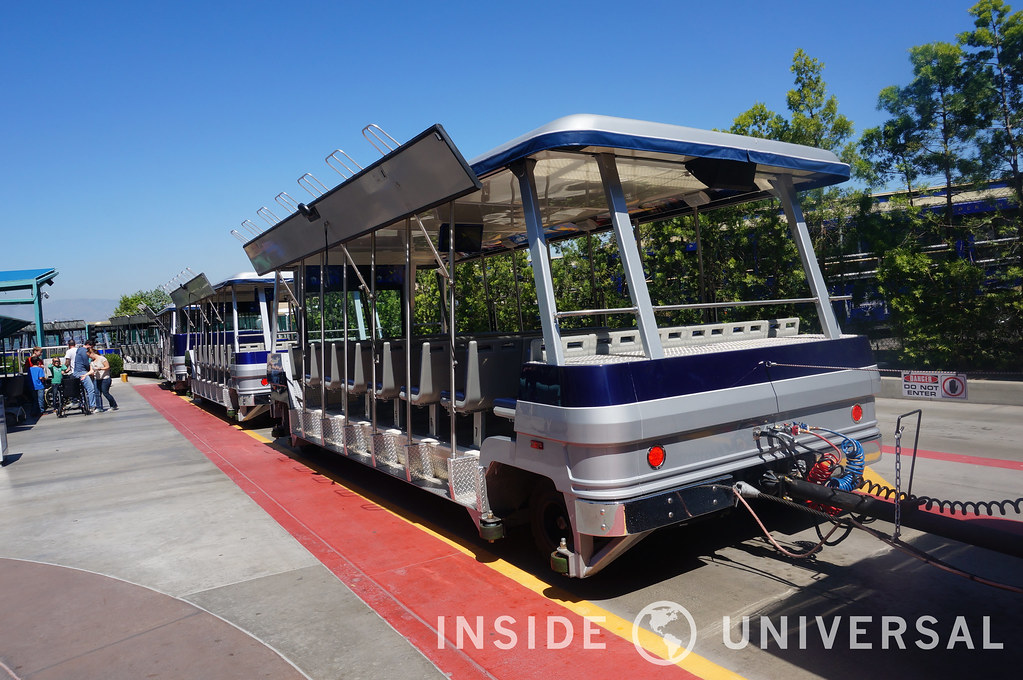 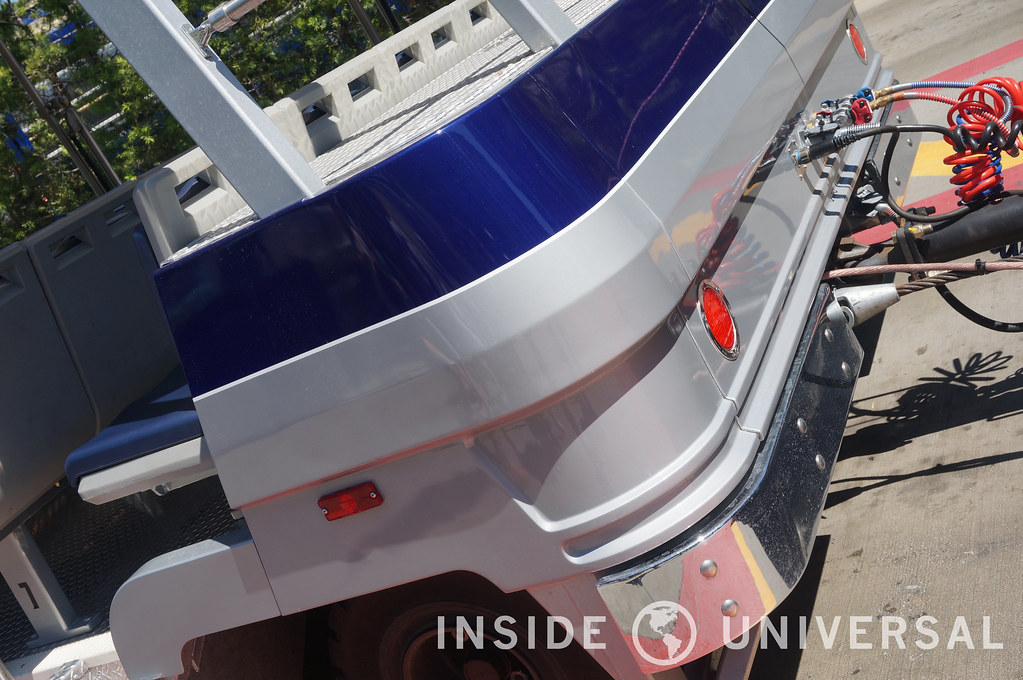 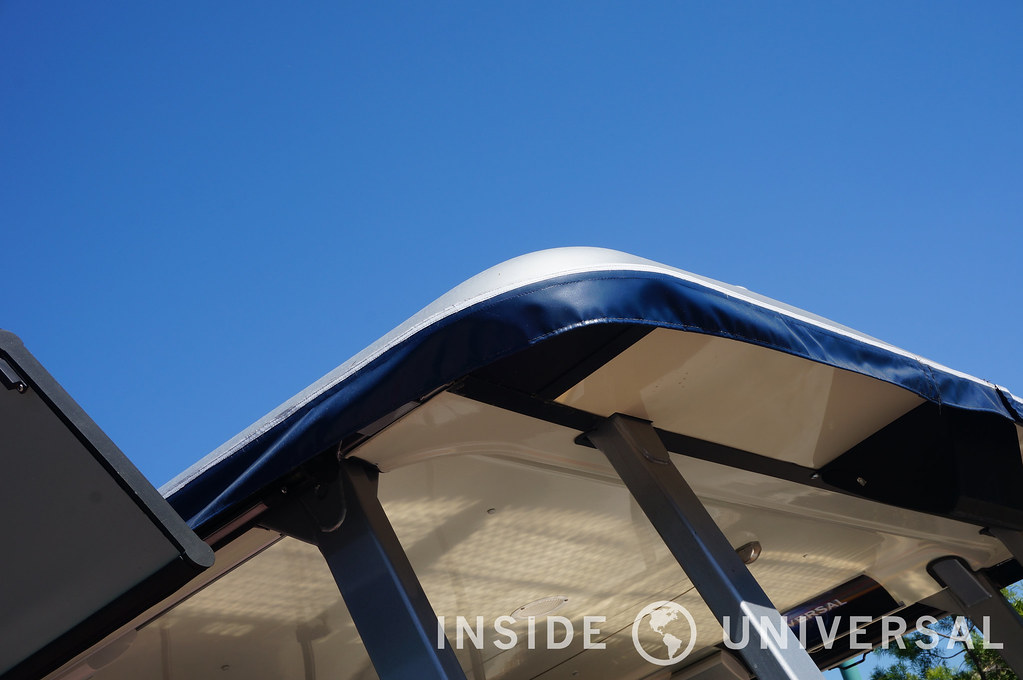 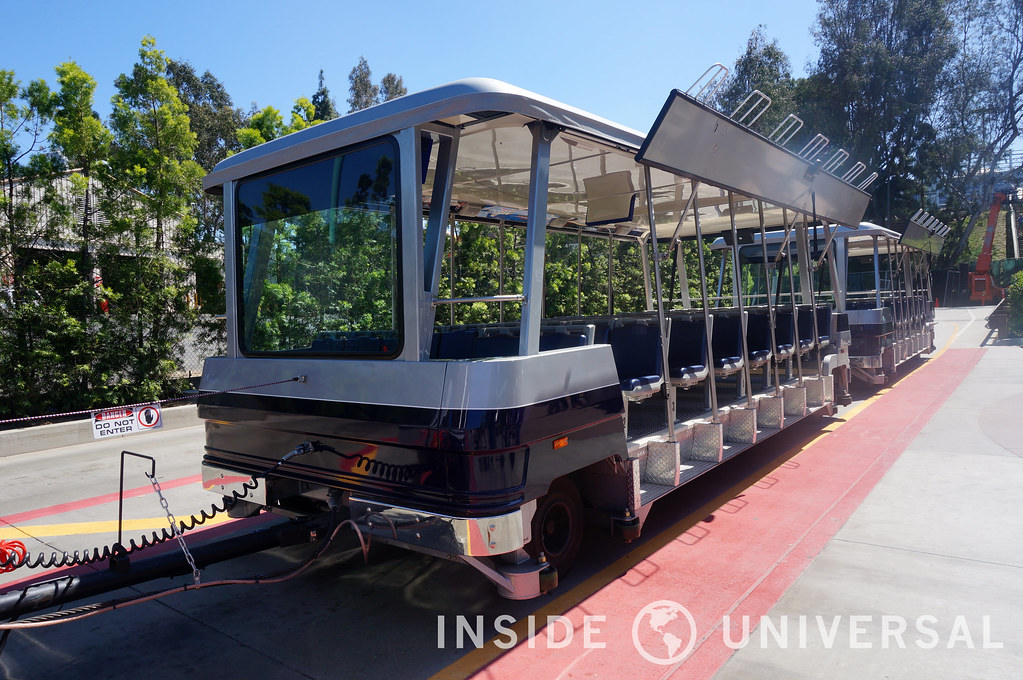 Perhaps the most noticeable change for guests would be the addition of new seats.

The foam padded removable cushions have been replaced with a new hardened Tempurpedic-esque material. While I wouldn’t go as far as to describe them as “ultra-comfy,” they are an improvement and they appear to be better integrated into the seating, leaving less room for wiggle. 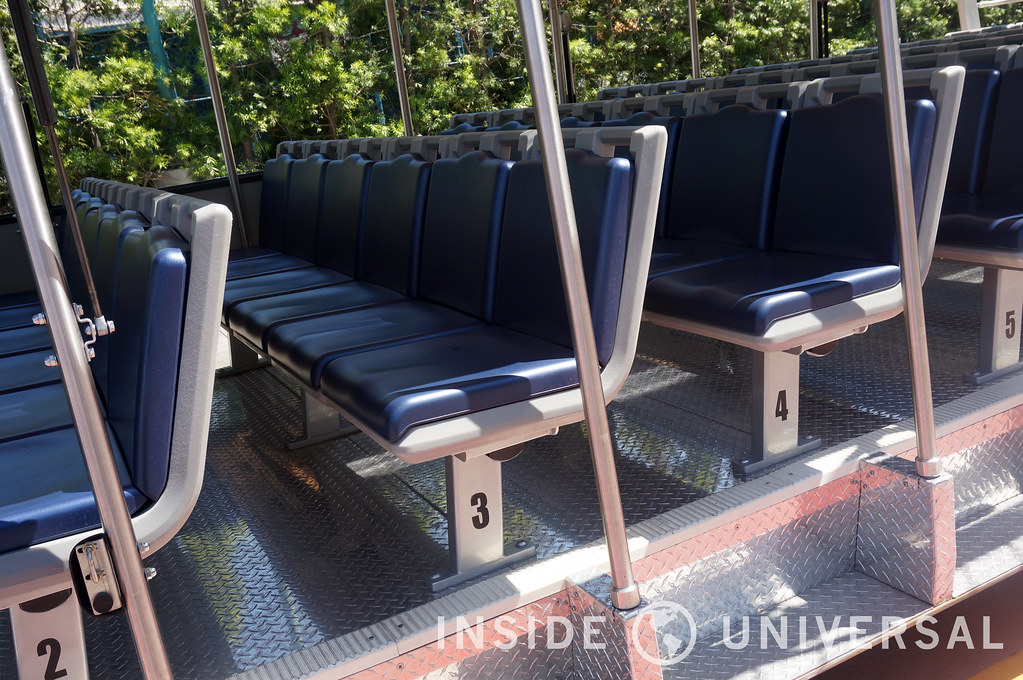 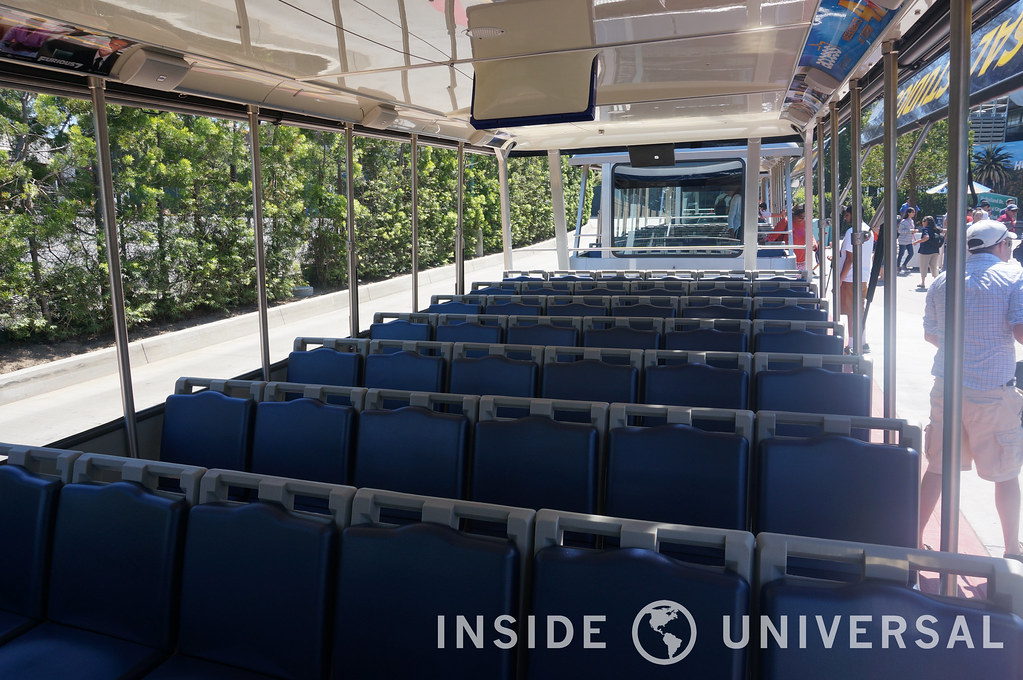 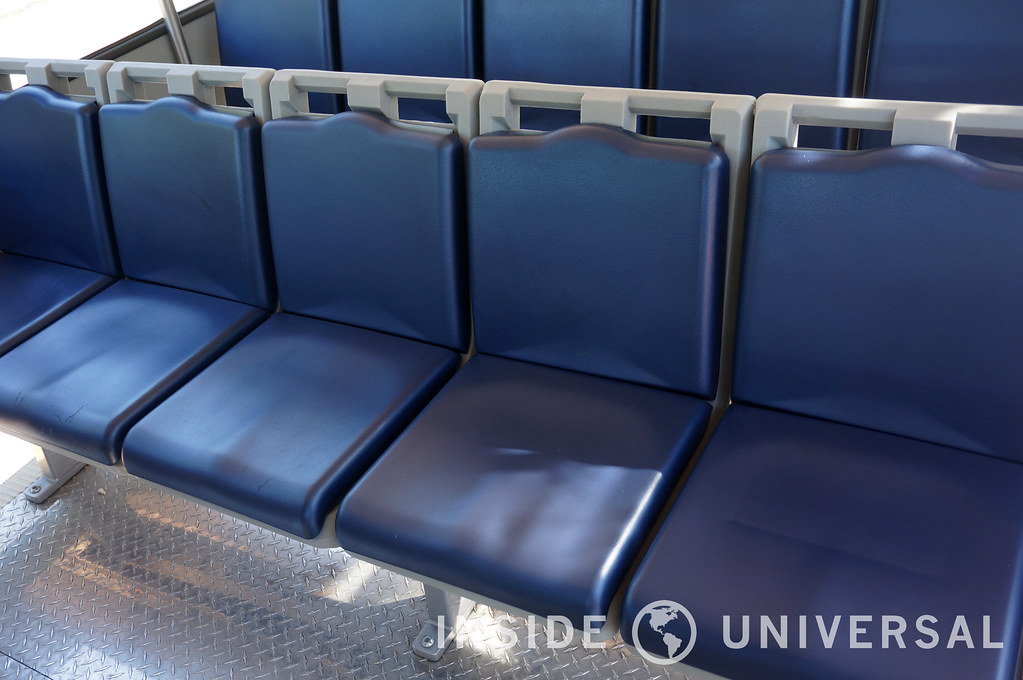 As we mentioned earlier, the tram’s audio and video system remains the same, with Universal employing custom-build Transvideo high definition monitors and speakers from JBL Control Contractor line. Since the system hasn’t fundamentally changed, the new trams have no noticeable video or audio improvements from their predecessors.

That being said, Universal did purchase new components in lieu of transferring the old system, installing brand new JBL Control 23s and JBL Control 28s on the ceiling of the tram. It’s a nice improvement if one factors in the replacement of the tram’s old, yellowed components with new, freshly manufactured white cases. 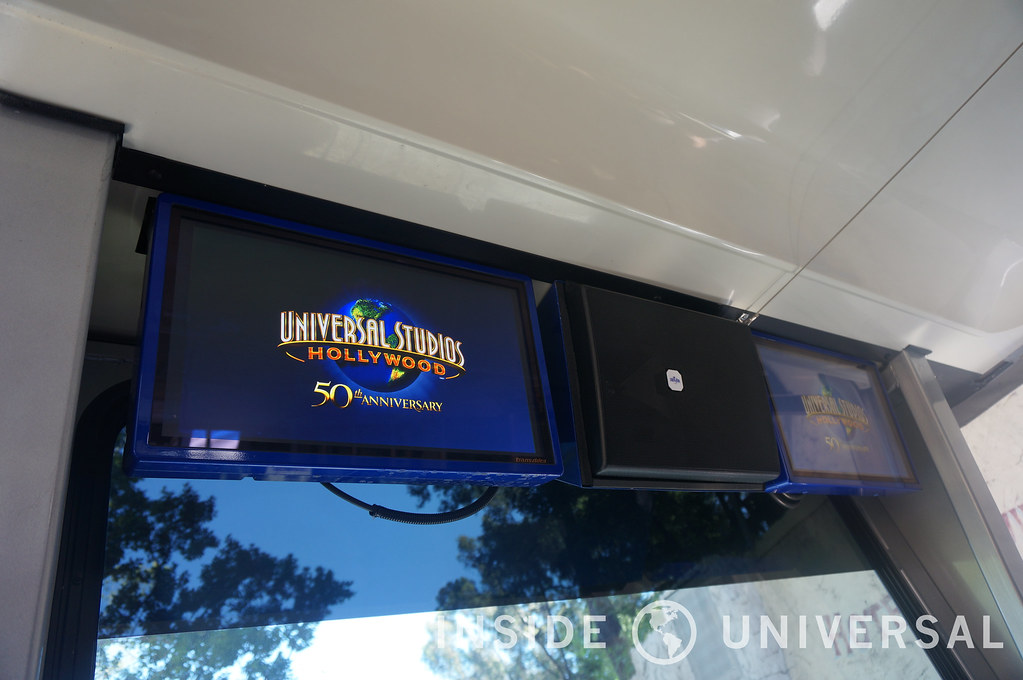 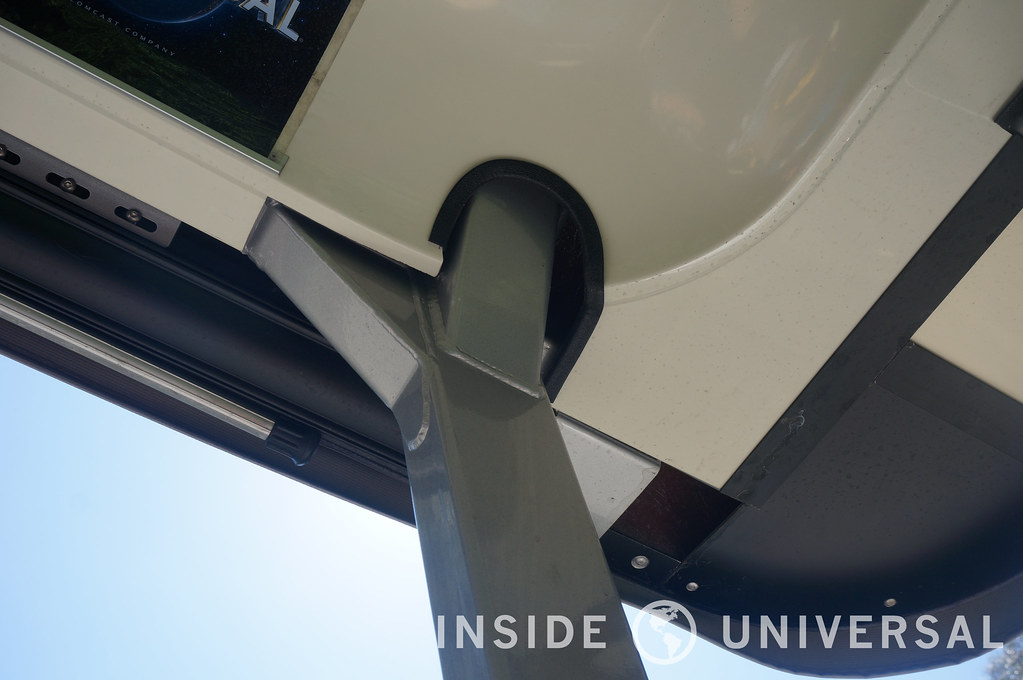 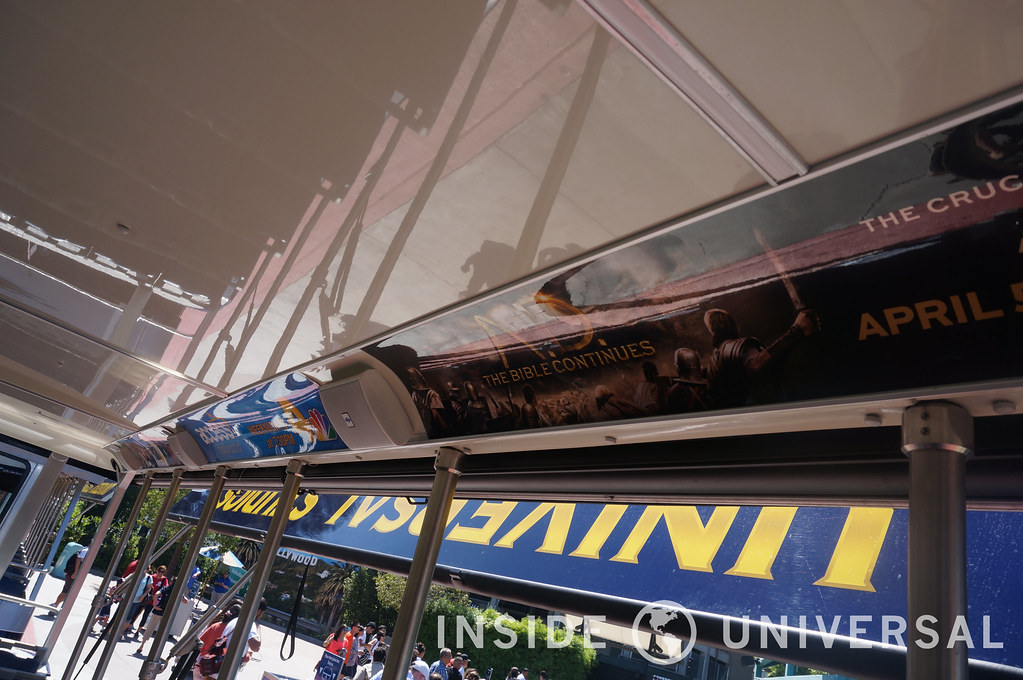 In short, Universal’s new 50th trams are a nice refinement of their predecessors, employing small yet significant changes that will ultimately improve the guest experience. While not as radical as the changeover from the Glamour Trams to the Super Trams of yore, Universal’s new fleet provide a nice foundation for the next decade for the Studio Tour.

For our readers that have experienced the new tram – what do you think? We encourage you to share your experiences below. For now, thanks for reading and we’ll see you in the next article.