September 19, 2015 – For Halloween Horror Nights 2015, Universal was kind enough to invite Inside Universal for a sneak peak at two of its upcoming mazes for this year’s event: Insidious: Return to the Further and Crimson Peak: Maze of Madness. Insidious will be familiar to guests who attended the event in 2013 when the hit horror film made its debut at the park. The maze version of Crimson Peak will make it to audiences before the film does, similar to last year’s Dracula Untold, as the film has a release date of October 16, 2015. Both Crimson Peak and Insidious have plenty of fresh and innovative qualities to offer crowds this year, which we’ll preview below.

As we stood out front of the Lambert family house façade for Insidious, John Murdy, Creative Director of Halloween Horror Nights, made it a point to mention that this years maze is very much a variety of “mad science projects” that he and his team have incorporated into the maze. The maze was a hit in 2013, so obviously he wanted to retain elements of that maze while giving the fans something new and incorporating the third Insidious film into the experience. “If you’re a fan of Insidious” Murdy told us, “you’re getting the best of all 3 films.” 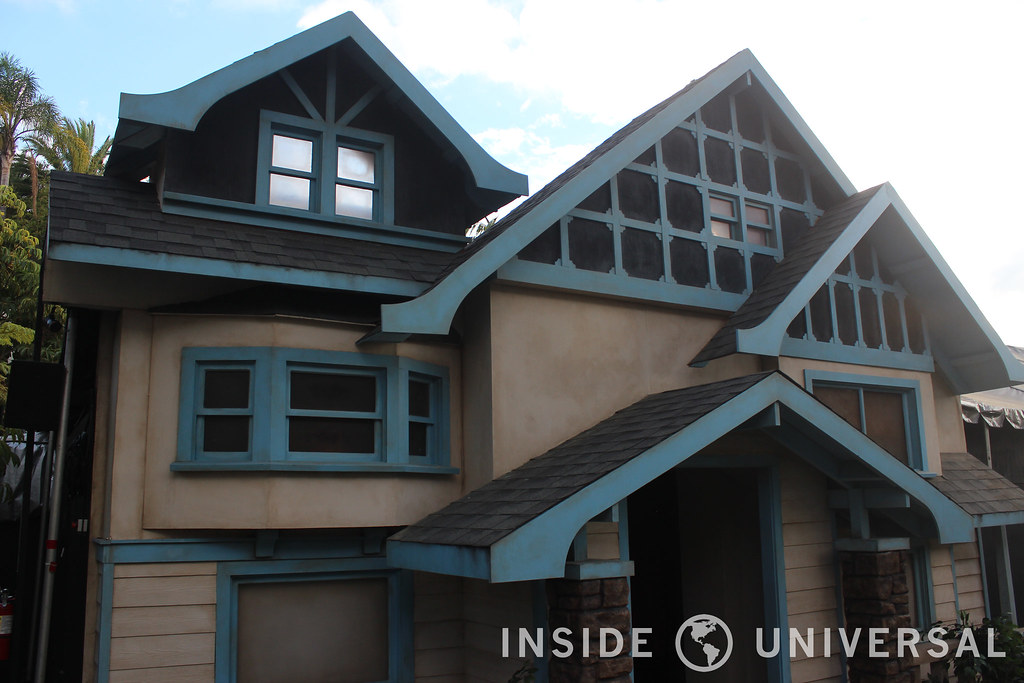 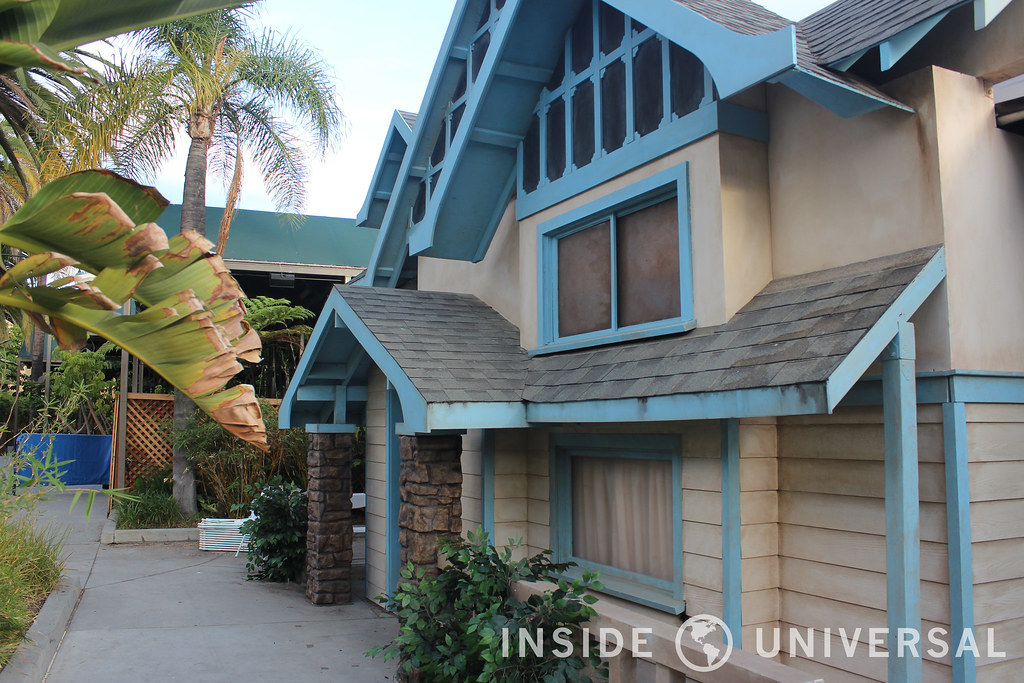 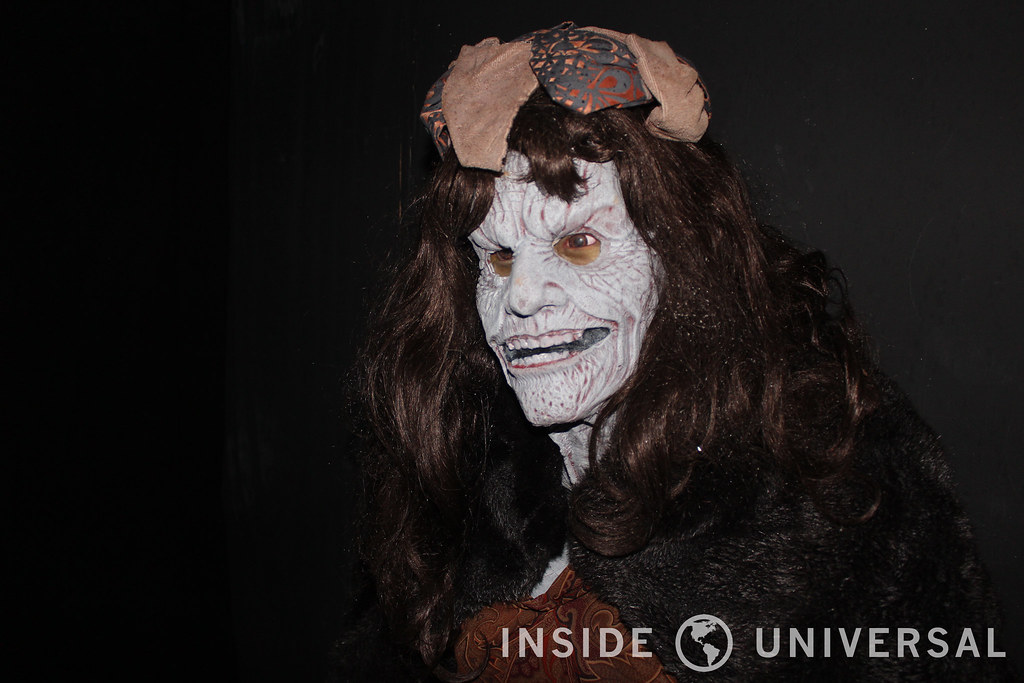 The first of many mad science experiments was to create a new way of spreading low hanging, thick, movie quality fog across the maze. Murdy and his team actually developed an entirely new method of using dry ice to spread across the maze, and there are various rooms within the maze that house these fog units. Carefully placed fog vents will disperse the fog in key areas of the maze and the maze will hang low as seen in the films.

Guests will enter the house and move into the living room, where they will see the iconic baby monitor from the first film, picking up ghostly noises. This room looked largely unchanged from 2013. From this point on, most of the maze is new – with a multitude of special effects. While we won’t reveal all of the effects in this article, we will mention that one of the effects involves the use of projection mapping. Murdy and his team used visual effects to film an actor crawling across a green screen that will then be projected on to the wall, creating the illusion the demon is actually crawling against the bedroom. After Dalton’s room, we enter the Hallway of Candles. Chris Williams, Art Director and Production Designer for Halloween Horror Nights, developed a way to make hallway walls disappear, leaving guests surrounded by floating candles – achieved with the use of clever lighting and theater techniques. Suffice to say, the same clever use of theater tricks transfer to the remainder of the maze, as the Halloween Horror Nights crew attempted to stay true and authentic to the film.

Closing remarks from John Murdy consisted of him praising working with James Wan and Leigh Whannell – noting their close personal relationships and their willingness to contribute and offer input to the event. 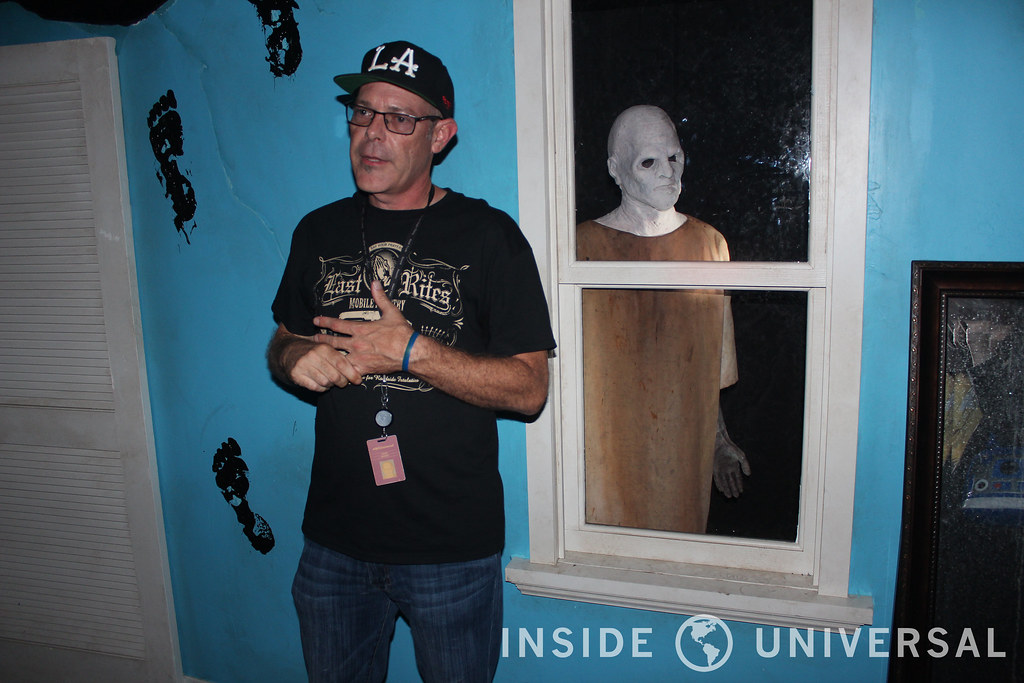 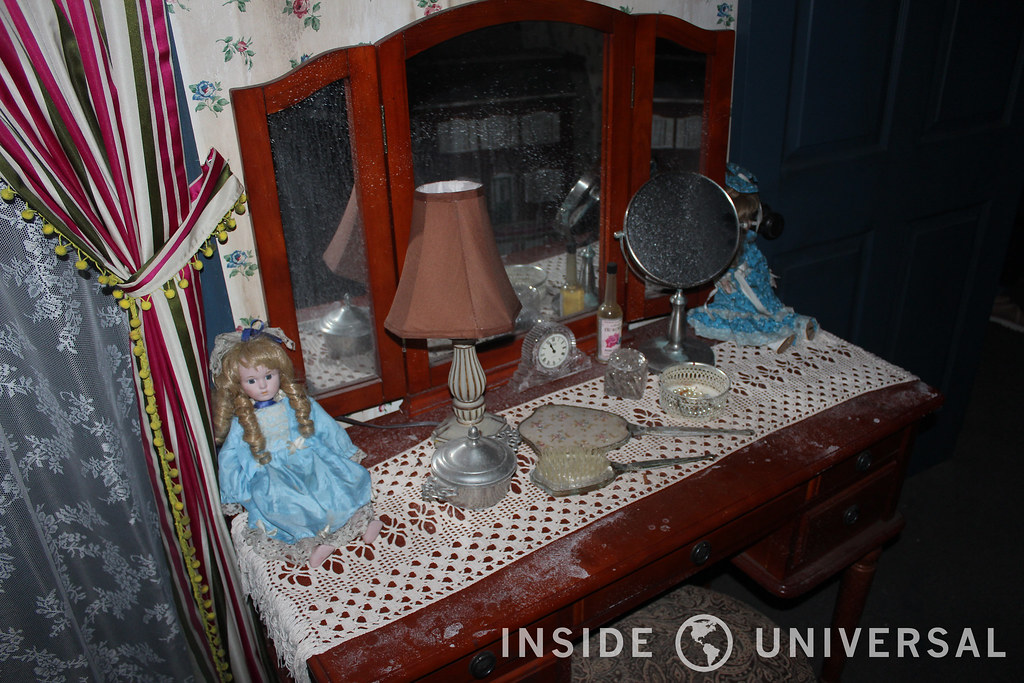 For the first time in Halloween Horror Nights history, a maze based on a Guillermo del Toro film makes its way to the park with Crimson Peak: Maze of Madness (based off Crimson Peak which will debut on October 16th of this year). Since the maze will be unveiled nearly a month before the film’s debut, the maze will serve as a live trailer for guests who come to the event, similar to Dracula Untold in 2014, and The Thing in 2011.

John Murdy exhibited much excitement in being able to collaborate with Guillermo del Toro – and for good reason. del Toro is one of the most visionary directors of the modern era and it’s quite evident when the famed director has involvement with any given project. del Toro and Murdy met three years ago at Halloween Horror Nights and met early in 2014 for breakfast to talk about a potential collaboration. Later that night, del Toro was informed that his newest film would be put into production earlier than expected – preventing him from working with Halloween Horror Nights during the 2014 season. However, this new time table meant that del Toro would have a new horror film – a Universal Pictures film no less – out in October of 2015. This ended up being perfect circumstances to bring the film to Hollywood as a maze. 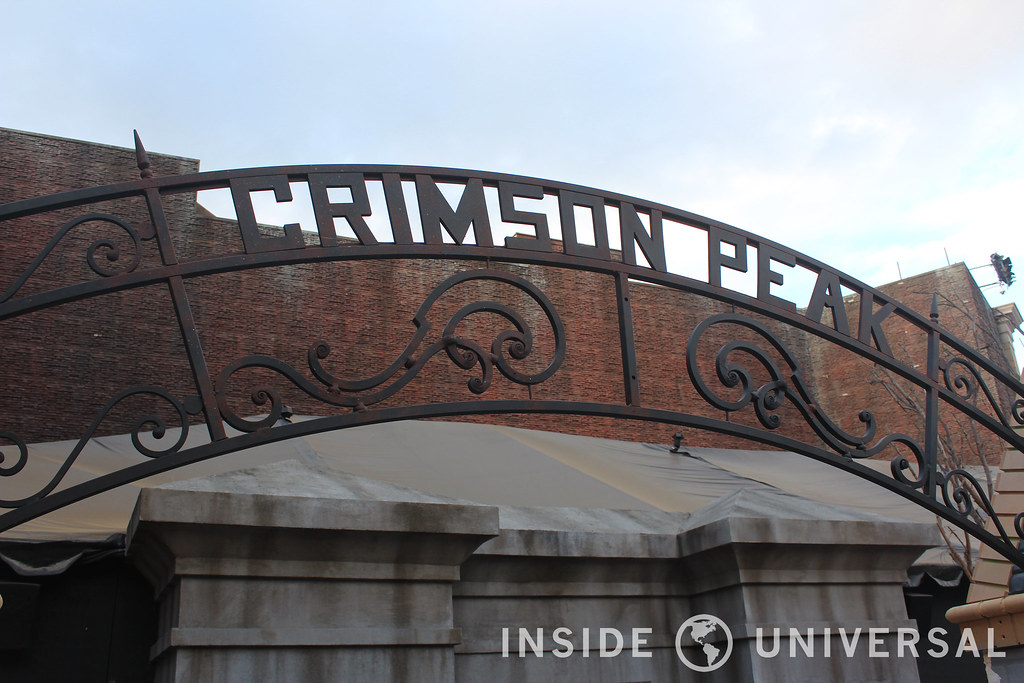 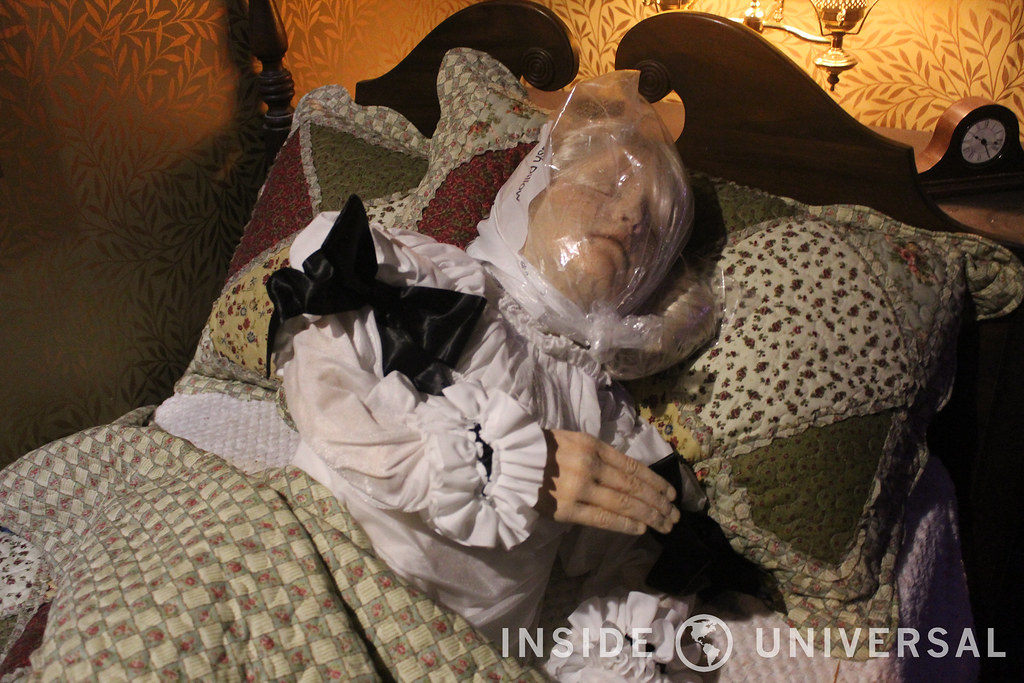 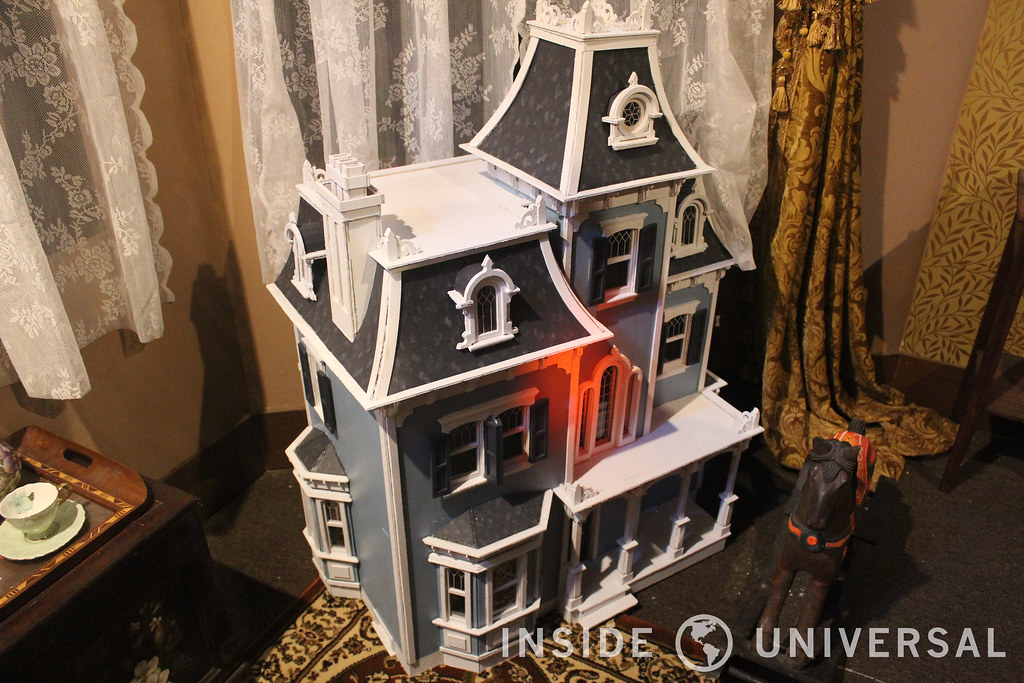 For those unfamiliar with Crimson Peak, it is strongly recommended that you view the trailer for the film to fully understand the maze. The film is about a woman, Edith, who is haunted by the ghost of her mother as a child, who warns her of the dangers of “Crimson Peak.” Later in life, Edith marries a man and moves into his old decaying mansion, along with his sister. Strange events began to occur and the terrors of Crimson Peak are unleashed. John Murdy explained that this isn’t a typical horror film, using the term “high-horror” to describe del Toro’s latest venture. He explains it’s a gothic romance with themes similar to Edgar Allen Poe and the Hammer Horror films from the 50s and 60s. This isn’t your typical blood and guts, ghosts and goblins-esque horror film.

As we approached the maze, crews were hard at work putting the last touches on both the interior and exterior of the maze. Building the sets to be del Toro authentic is a massive undertaking and no details were overlooked. The façade of the maze is themed to a cemetery, where most the props had to be fabricated off-site or rented, which were arriving the night we had our tour. Seeing all the work put in to the maze gives you a new appreciation for what goes on behind the scenes of the event. 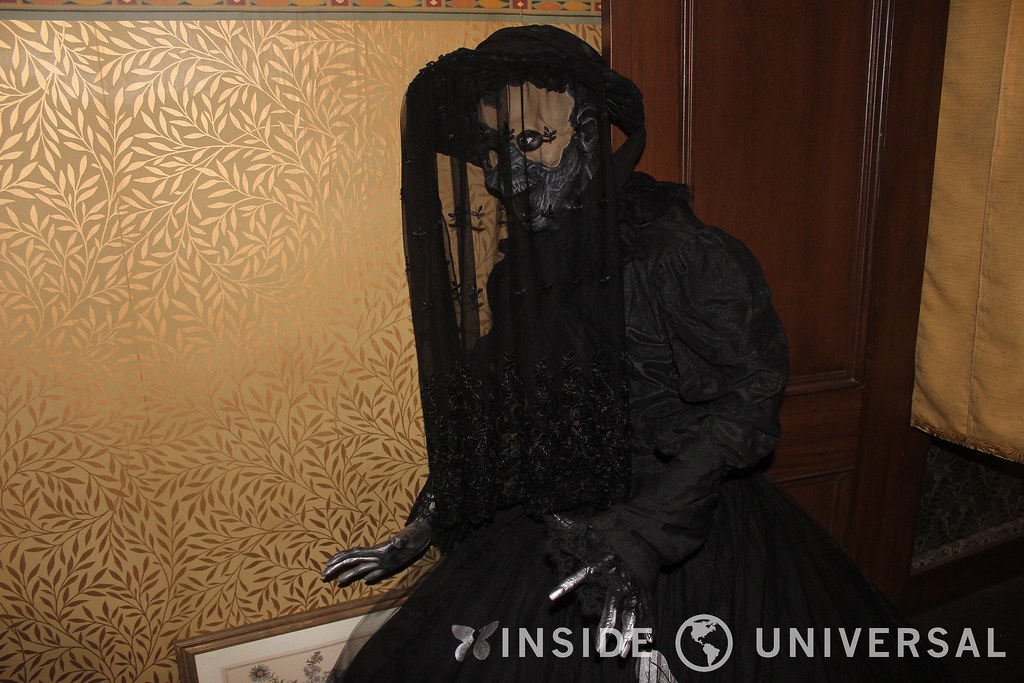 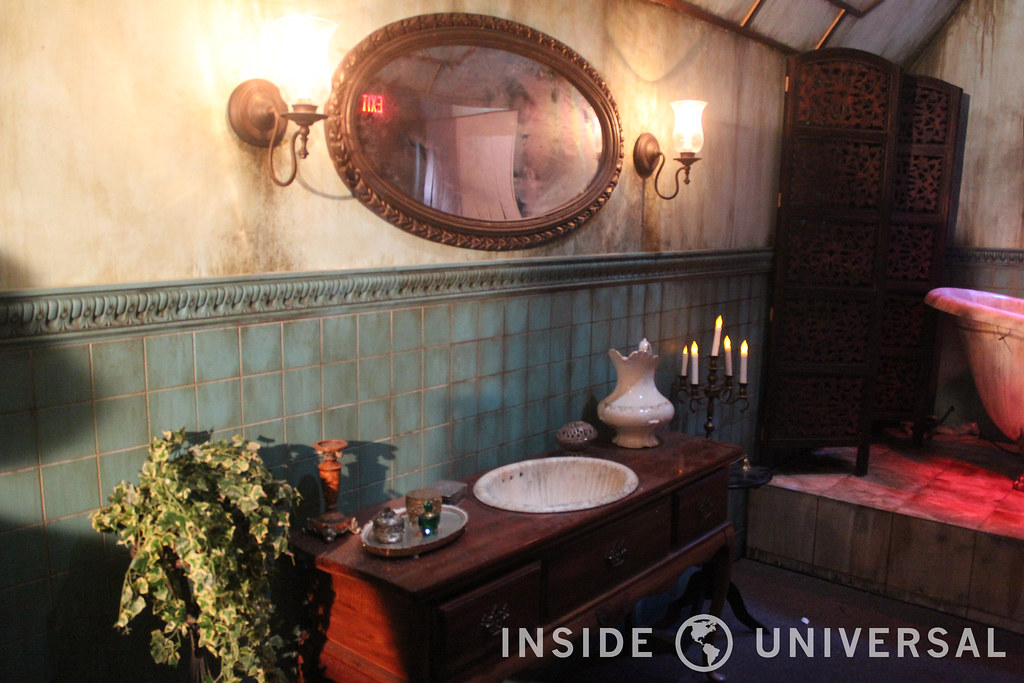 Since the film is not yet released, the scene descriptions will be brief, but if you watch the trailer, you’ll have a good idea of the haunting world guests will be transported to in the maze. Once you enter the mausoleum, you’ll be transported in the world of Crimson Peak – with wallpaper, rugs, fabrics, pictures and décor all themed according to the film. Murdy explains that the mansion, which you will approach in the next room, is actually character built out of clay mine, which causes the house to exhibit a rather unique special effect as guests enter the room.

Murdy also noted that training the scareactors to scare appropriately was another challenge in bringing a del Toro film to life. The creatures in del Toro movies have very distinct range of motion that must be properly replicated by the scareactors within the maze in order for the experience to maintain congruity with the film. The actors can’t simply pop out and swing at guests, they have to twitch and move quickly. Others have to take long strides with big swings and have bugging out eyes. Simply put, there is no universal way for a scareactor to scare inside of Crimson Peak. Each scare is specifically thought out and specially trained.

Murdy and his team were given 38,000 images to use as reference when creating the maze. Several files were used to recreate images and wallpapers for the maze. As one example, one sheet of wallpaper depicts moths. del Toro wanted to use the images of moths heavily in this film and they are featured heavily throughout the maze in various forms. Much of the woodwork in the maze also had to be computer laser cut because the designs were too intricate for a carpenter to cut on location. This is a testament to the amount of dedication the Halloween Horror Nights team gives to details.

Crimson Peak: Maze of Madness will no doubt impress guests due to its painstaking recreations of Guillermo Del Toro’s visionary set pieces. This along with trademark Halloween Horror Nights scares will make for one of the top experiences that 2015 will have to offer. Just seeing the maze in it’s raw form already has me dying to see the movie when it comes out in October.