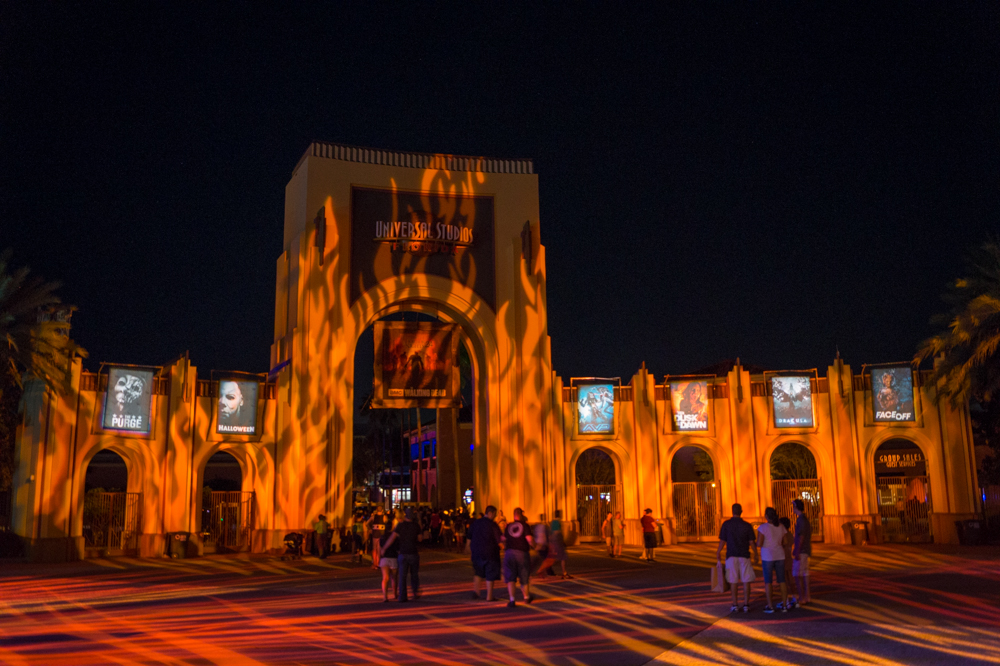 On select nights Sept 18 thru Nov 1, get ready for some frightening encounters. Halloween Horror Nights will mark its milestone 25th year as the biggest, longest and most intense in event history.
We’ve gathered everything you need to know before heading out to the event; including haunted house and scare zone information, as well as shows, tickets, crowds, and everything in-between.

Halloween Horror Nights is set to begin it’s 25th year this year. Halloween season at Universal Orlando is one of the best and BUSIEST times of the year to visit.

Here’s a layout of this year’s map. The legend is right below:

The Icon: Jack the Clown

After a 5-year break, Jack the Clown is coming back to Halloween Horror Nights to bring his dark, twisted, sadistic ways for the event’s 25th year. He was the event’s very first original icon. Also making a return is Jack’s sidekick and “love” interest Chance, a character loosely inspired by Harley Quinn from the Batman comics.

Icon is a term used by Universal Creative which essentially means the year’s designated “host”. The event is sometimes entirely marketed and designed with the idea that the Icon “brought” all the terror together. There are 10 characters who are considered “Icons”, and each have an intricate backstory and importance in the event. The icons will be featured this year in the designated “ICONS-HHN” scare zone. They are:

Jack paved the way for Horror Nights to grow into much more than just a pretty poster and random haunted houses. Looking for a way to evolve the event, Universal Creative surveyed guests about their fears. Unsurprisingly, clowns was a top answer. So then Creative went to the drawing board and developed this classic icon of Halloween Horror Nights. The introduction of Jack during Horror Nights 10 also marked the introduction of storytelling. Houses, zones, and in some cases shows, all tied in with the theme and icon of each year.

Now he returns darker and gritter than ever in what promises to be the event’s most biggest year yet!

For those who have visited the event in the past, you know what to expect. For those who haven’t, get ready for some of the greatest haunted houses you’ll experience. We’re talking full blown houses of terror with incredible detail – featuring facades so massive and well-designed, you start to question if it’s an actual location. This year’s event will feature 9 houses, the most Halloween Horror Nights has ever done. Here’s a quick bit of each house and how it ties to the past 25 years:

The Walking Dead: The Living and the Dead: Based on Season 5 of the popular Horror-Drama, this marks an unprecedented 4th straight appearance for the franchise. The Walking Dead has helped catapult the event into another stratosphere of popularity and notoriety.

The Purge: After a successful turn as a scare zone during Halloween Horror Nights 24, the film now will be featured as a house at this year’s event – cramming all the crazy purgers into tight corners.

RUN: Blood, Sweat, and Fears: Run is a more bloody twist on the 80’s film The Running Man. It has been featured in 2 events in different forms. This year, Run takes place inside Hellgate Prison – A popular house from Halloween Horror Nights 15. Another mash-up of Horror Nights original favorites.

Freddy vs. Jason: The 2 horror juggernauts were first used during Halloween Horror Nights 17 in their respective houses. Their usage during the 17th year was one of the first times Universal used outside properties, which were also colossal staples in Horror. This year, the event will have them collide just like the 2003 movie. You will experience walking thru Elm Street and Camp Crystal Lake.

Asylum In Wonderland 3D: A sort-of spin-off from Scary Tales – the house is inspired from the scare zone used in 2008’s event “Asylum in Wonderland”. In this house, guests will view the world of Wonderland through the eyes of Alice and wonder if she is indeed really experiencing a trip down the Rabbit Hole, or if it’s all in her mind.

Insidious: This house has never been used before in Horror Nights 25 year history, but was a popular house in Orlando’s sister event in Hollywood for 3 years (including this year). A lot of great concepts to use to scare guests should make this a welcomed addition to the Horror Nights line-up.

Jack Presents: 25 Years of Monsters and Mayhem: Jack has rounded up all of the most horrific monsters and creatures from the past 25 years. Consider this the “Best of” house. So far, not much is known, but we should expect appearances from the Classic Universal Monsters and some fan favorites from year’s past – such as Gothic and Nightingales.

An American Werewolf in London: First appearing just 2 years ago during Halloween Horror Nights 23, many consider this house to be one of the Top 3 haunts ever created by Universal, with some saying the best ever (It’s our Number 2). Universal Creative brought it back this year to give the fans one more run through of one of the most popular houses ever.

The houses are constructed in several different locations around the park, such as existing attraction queues, stand-alone tent structures and Universal’s Sound Stages.

Universal’s Sound Stages seem to always feature some of the craziest haunt sets and designs since they have a lot more open space. This year, Shrek’s theater will be used for the first time to house Asylum in Wonderland.

Scare Zones are designated themed areas in the park where “Scareactors” roam to terrorize you. Universal goes all out and morph Universal Studios’ existing streets into believable areas; featuring eerie lighting, loud musical scores and sound FX, fantastic sets and props, and of course dozens of scareactors! This year, the event features 5 set scare zones, as well as 3 roaming chainsaw hordes. The hordes have no set area, and can travel anywhere outside of the themed areas. This year, the zones are as follows:

The event features 2 shows this year – Bill & Ted’s Excellent Halloween Adventure & The Carnage Returns. Bill & Ted is a staple for Halloween Horror Nights, and has been featured since 1992. It is a comedy show that satires the past year in “politics, show business and pop culture”. The show will once again be held at the Fear Factor Stage. Make sure to check your park map and arrive 20 to 30 minutes prior to the next show time. It can get full.

The Carnage Returns is a throwback to old-school Halloween Horror Nights, when the icon had a “introductory” show. The show should feature Jack being Jack and poke fun at everything while engaging in some “carnage” with some helpless victims. The stage is located across from Mel’s Drive-In Be warned – it can be a bit gory. Just like Bill & Ted, check park map for times and make sure to arrive a bit early for a better view of the stage.

Go to Page 2 for Information about Tickets, Crowds, FAQ and Tips.