While the casting of light certainly helped Harry and his friends throughout their adventures, it also proved to be an undeniable ally in Alan Gilmore’s quest to recreate the fanciful world of Hogsmeade in the middle of the San Fernando Valley.

Why you may ask?

Well, despite the fact that Hogsmeade has been faithfully recreated in over three locations across the world – both at Universal Studios Florida and Universal Studios Japan – Hollywood’s iteration has proven to be both eerily similar and remarkably different at the same time. Though this may seem like an inherent contradiction in logic, the key to differentiating each land is to look closely at the details. 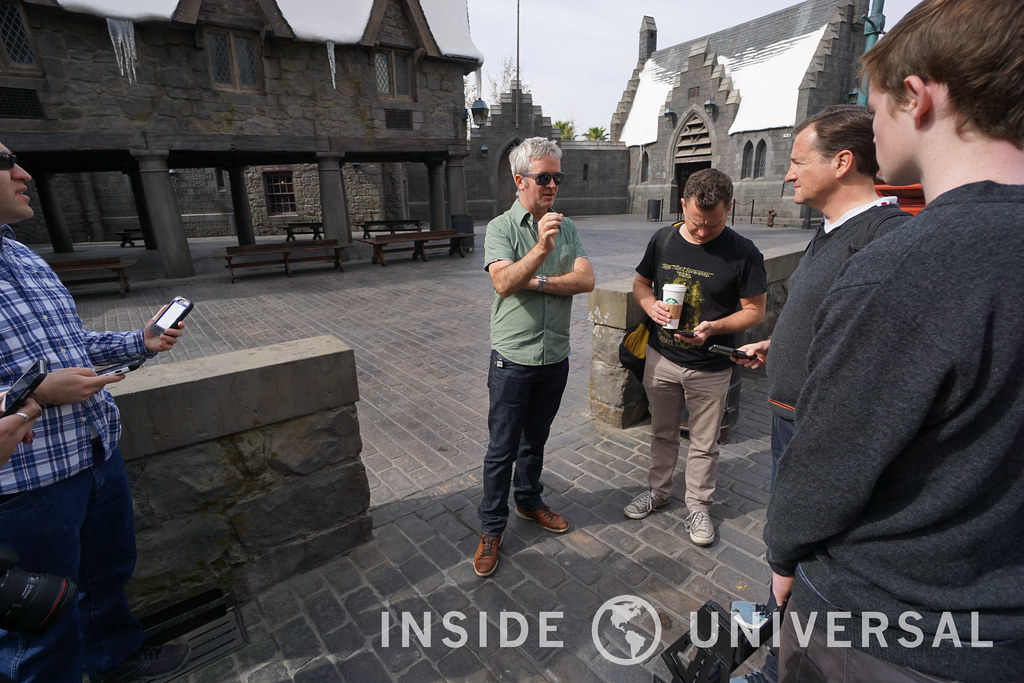 As Alan Gilmore – Supervising Art Director for The Wizarding World of Harry Potter and Art Director for the Harry Potter films – notes, each land has its own characteristics, and each land “has its own attributes that are tailored to their locations” – a challenging task when you consider the importance of remaining true to the films. Alter too much, and you’ll begin to distort the authenticity of J.K. Rowling’s fanciful world of Harry Potter. Alter too little, and you may get a land that doesn’t appear to take advantage (or even acknowledge) its surroundings.

In the case of Hollywood, lighting played an integral role in shaping the creation of Hogsmeade. “We learned very quickly that the light was going to help us in a really good way,” Gilmore said. Taking advantage of the position of the sun, Gilmore and Universal Creative positioned props and scenery in a manner that produced striking shadows and a sense of sharpness in texture that permeates throughout the land. Hollywood’s natural lighting also allowed Universal’s creative team to enhance the land’s patina and colors – an effect Gilmore calls equalizing. The effect is certainly tangible, as guests who have been to all three lands will attest. Gone are the subtle hints of shadow, and in their place, deep lines produced by warm and luscious Californian lighting cast over the entire land. And of course, come sunset, nothing can beat a photograph of Hogsmeade with a California sunset as your backdrop. 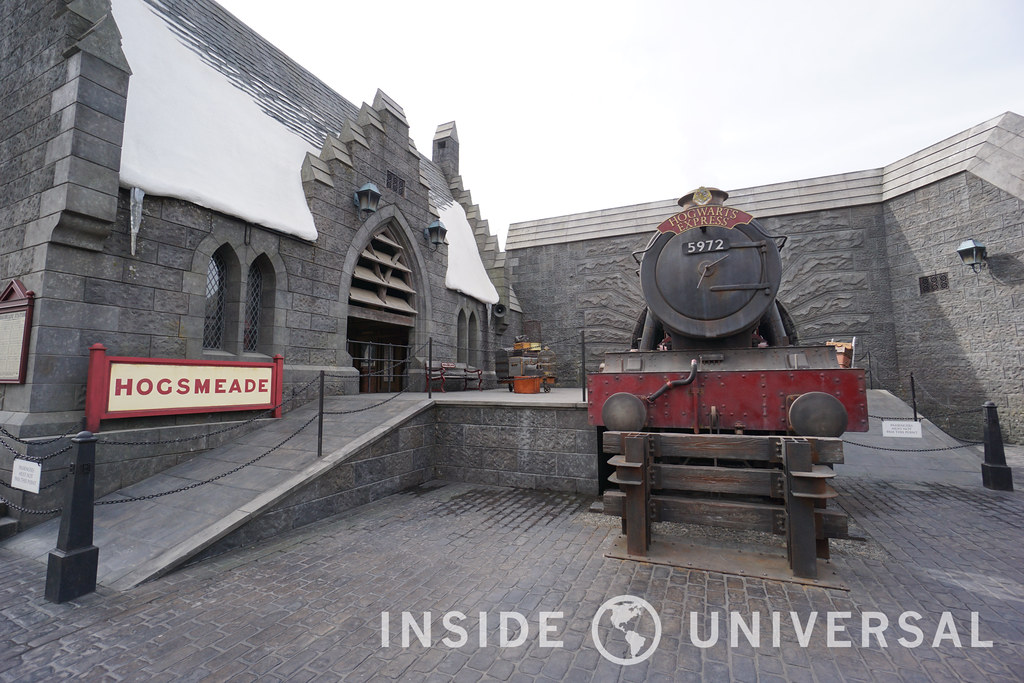 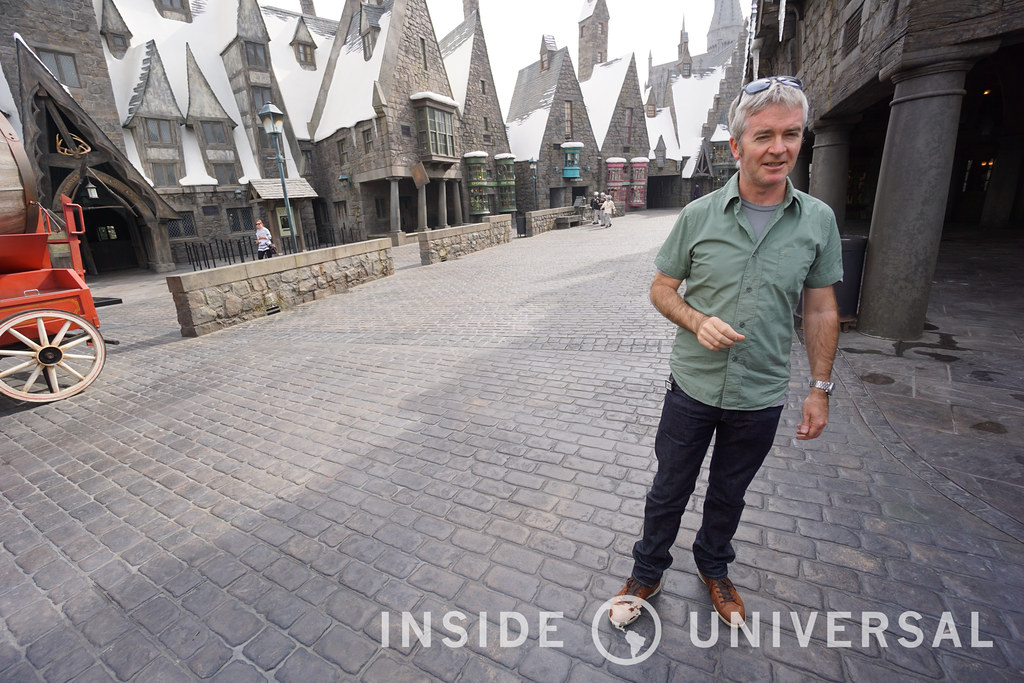 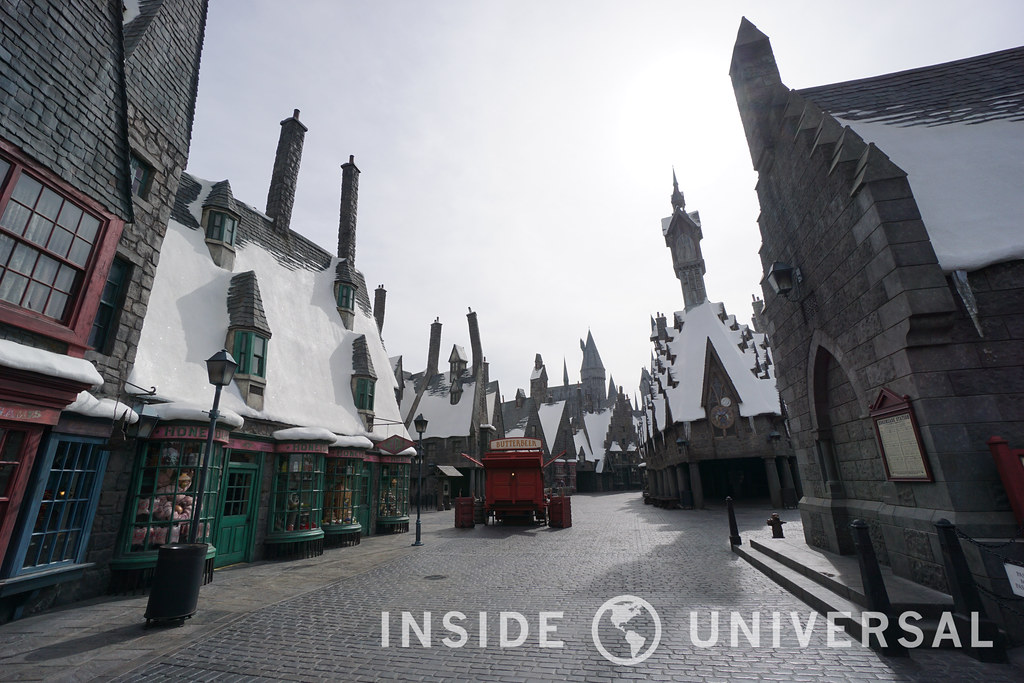 As guests approach a looming Hogwarts School of Witchcraft and Wizardry, they’ll see another unique feature that’s exclusive to Hollywood – adjoining mountains! Like Los Angeles’ naturally occurring sunny weather, the surrounding Hollywood Hills – which Gilmore refers to affectionately as the Scottish Highlands – allowed the creative team to take advantage of Universal’s geographical setting to place Hogwarts in the middle of mountainous terrain. The effect is especially powerful if one were to peer through the gaps once situated in the greenhouse queue. 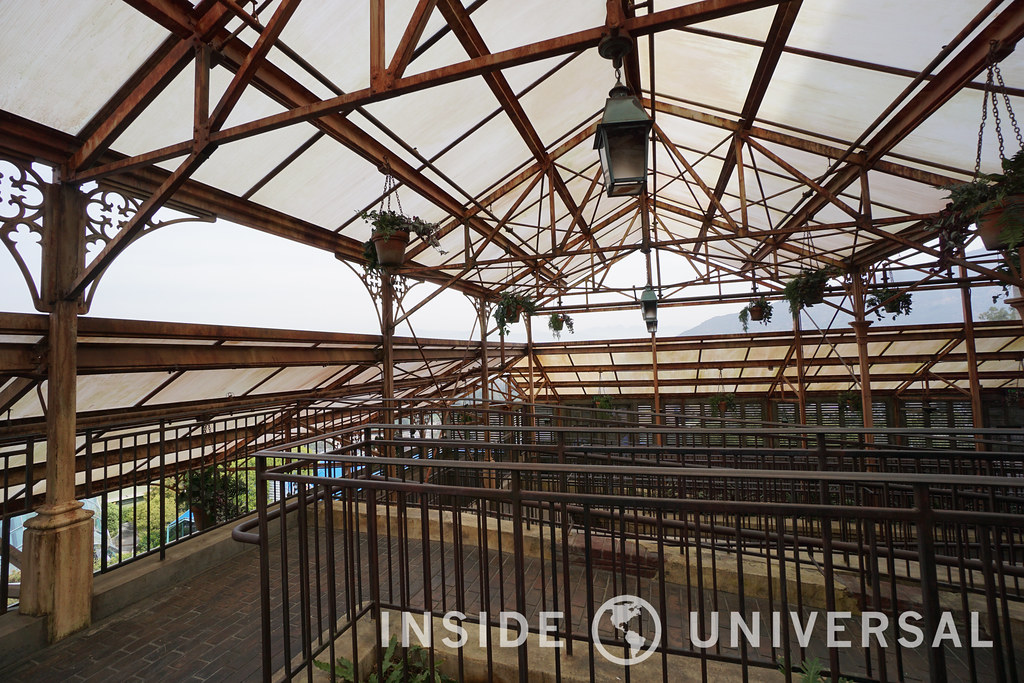 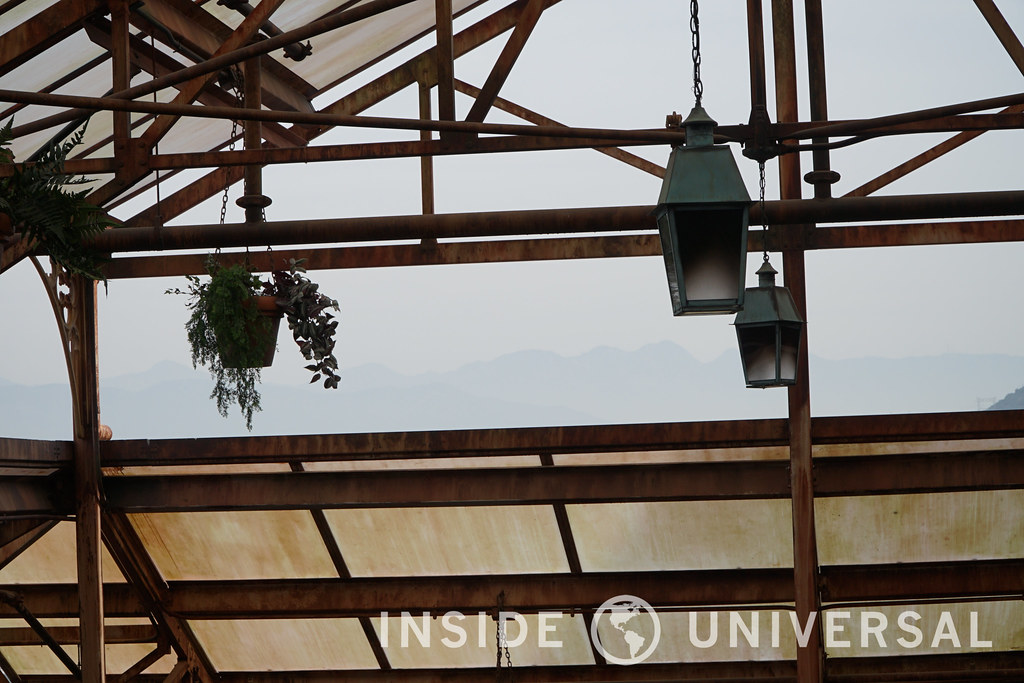 Though Universal’s creative team took advantage of Hollywood’s natural geography and location, they also relied on the architecture of the land itself to produce some differentiating results. As guests wander past the Owl Post, they’ll go down a new street featuring a host of facades, including the backdoor to Dominic Maestro’s, the DM Music Shop, Brews and Stews, The Magic Neep and the side door of Dervish and Banges – all created for the sole purpose of immersion, encapsulating guests into Harry Potter’s world. Whenever possible, Universal sought to immerse guests into the Wizarding World without tearing them out of their element. While Gilmore does acknowledge, “you can sometimes see the real world” from inside Wizarding World Hollywood, he does note “where we can, we will bring you into Harry Potter’s world as best we can.”

To further create a sense of believability, Universal also created eleven interactive window displays that may be activated by an interactive wand. Though not new to Universal Studios Hollywood, these interactive stations – as indicated by a floor plaque displaying the wand movements of the spell – will allow guests to set off whimsical effects and surprises enclosed in storefronts across the land, ranging from active instruments to croaking chocolate frogs. Judging from our visits to technical rehearsals thus far, the interactive wands appear to be a crowd favorite, with both the young and the young at heart queuing up to wave their wands at various displays. 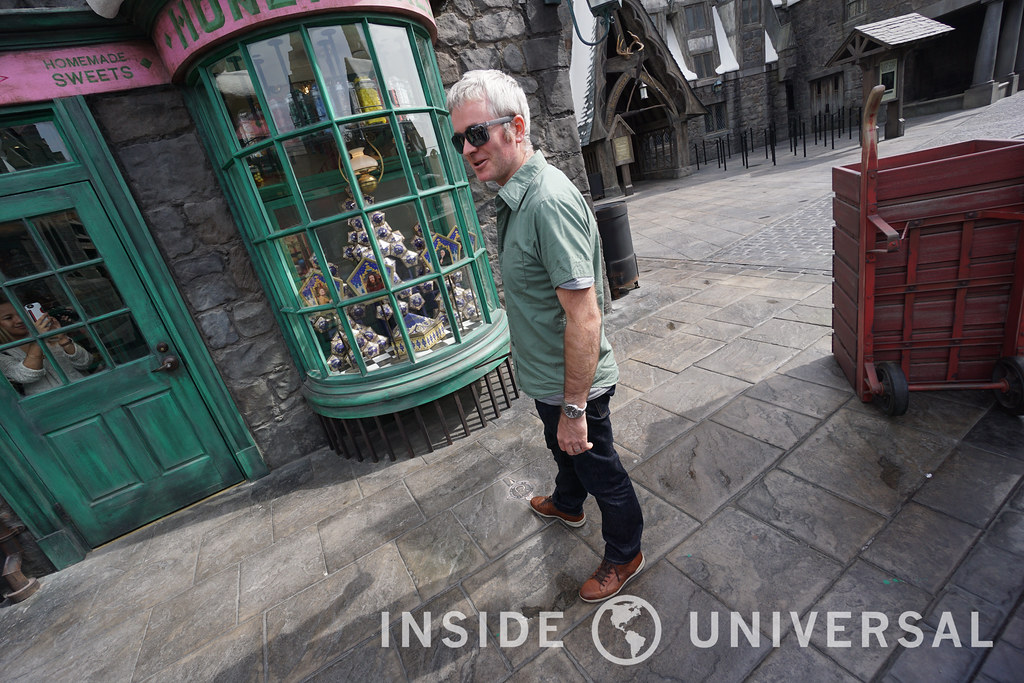 Heading inside of Hogsmeade’s various retail stores, Gilmore made an effort to emphasize the sheer age of Hogsmeade Village – a medieval town that’s over a thousand years old. As a result, various doors, handles, storefront signs and other fixtures across the land have been artificially aged to transport guests to an old, enchanted village. However, while artificial aging was used, Gilmore and his associates also chose material based specifically on how they would age with use. From tables, chairs and door handles to the various trees surrounding Hogsmeade Village, the crew sought out materials based on how they would eventually progress with age and use, making Wizarding World Hollywood a large interactive set that will constantly evolve in time in accordance with the art director’s vision.

In addition, guests can also wonder into Zonko’s Joke Shops, where their movement will trigger a host of gags and effects across the store’s vivid shelf. These gags and effects were all created with the intent of recreating an analog world – again, in line with Hogsmeade’s sheer age. Effects both in Zonko’s and throughout the land are either “enchanted or analog,” with a distinction between an enchanted item like Hogwarts Express and the analog oil and gas lamps that are situated across the land. In Hogsmeade, “technology” – Gilmore recalls – “is based on an older time.” Digital elements that would otherwise permeate a land like Springfield are either axed or cleverly hidden as analog devices, including magical picture frames housing monitors of all shapes, tint and size and the shadows of various characters projected in the dining halls of Three Broomsticks. Projectors and uncovered monitors will simply not be found. 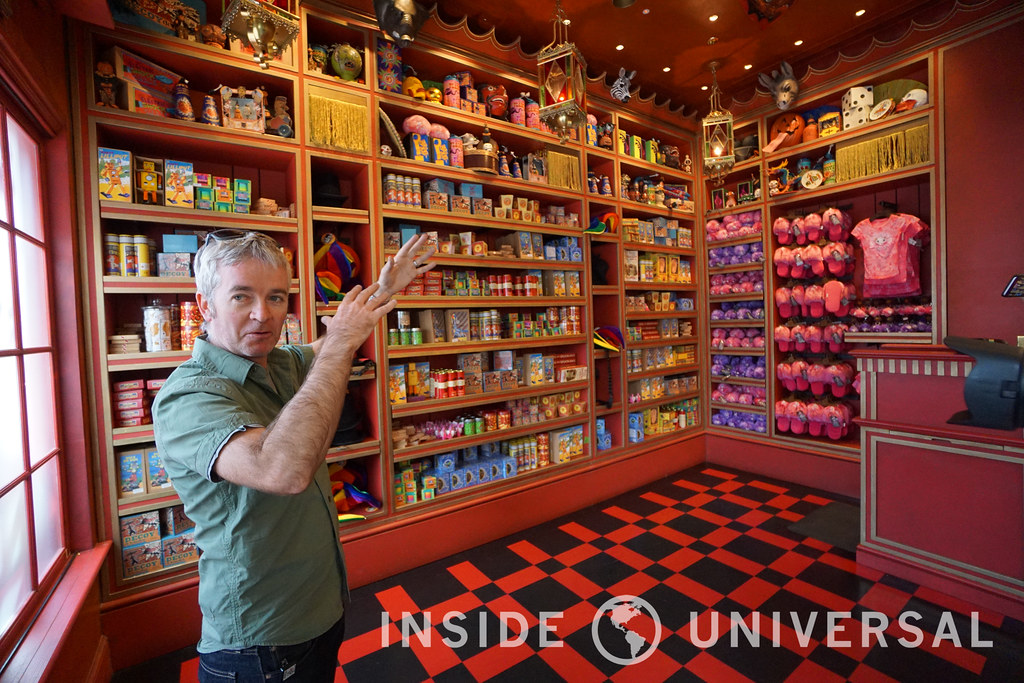 Of course, being that Wizarding World Hollywood is located inside a theme park, the land naturally features a wide array of merchandise and food that guests can purchase for their enjoyment.

For food, guests can dine in Three Broomsticks, or enjoy a beer in Hog’s Head. Given Three Broomsticks’ lineage of being the oldest establishment in Hogsmeade, Gilmore sought to give the building unique architectural motifs that couldn’t be replicated elsewhere in the land. Items as mundane as the windows inside the rustic watering hole were carefully recreated to resemble small planes of glass used in European architecture several hundred years ago. While that detail may be small and easily overlooked, discerning guests can compare Three Broomsticks’ design motifs to that of Honeydukes’, which features larger planes of glass in accordance to its establishment over three hundred years ago. Gilmore also sought to employ a variety design languages – such as Gothic, Victorian and Ancient Classical architecture – throughout Hogsmeade, using rich layers to set the scene for Harry’s eventual journey throughout the series. 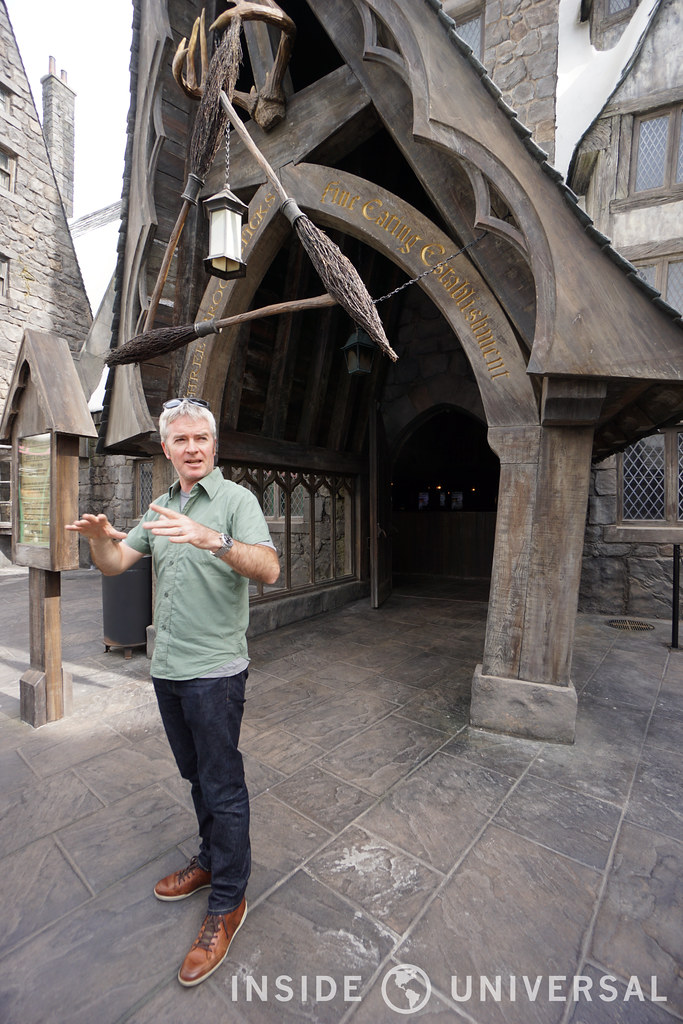 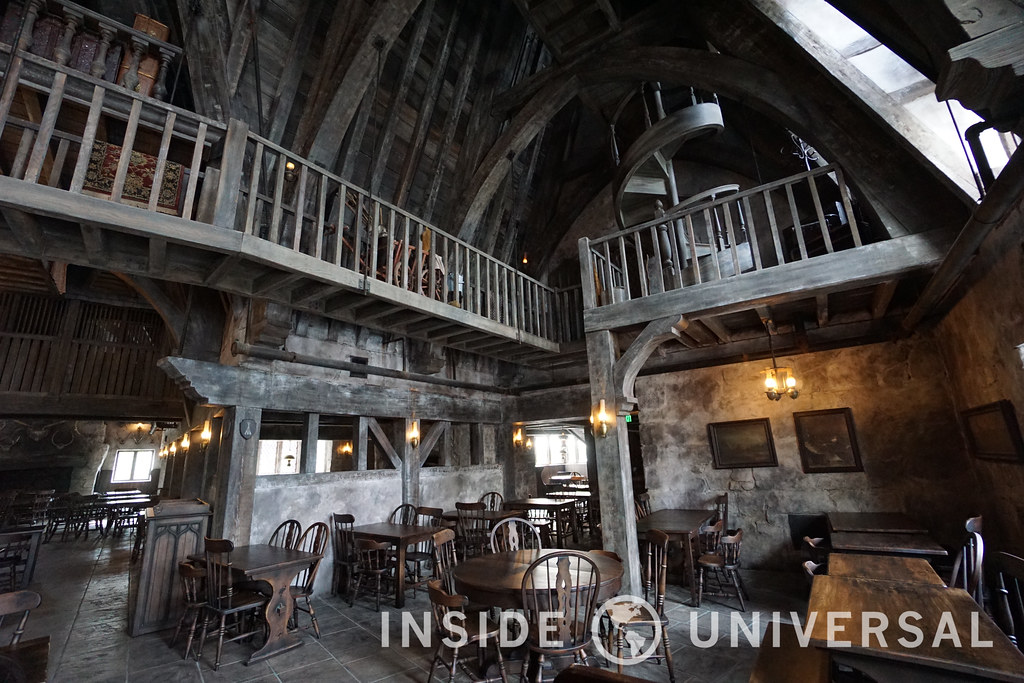 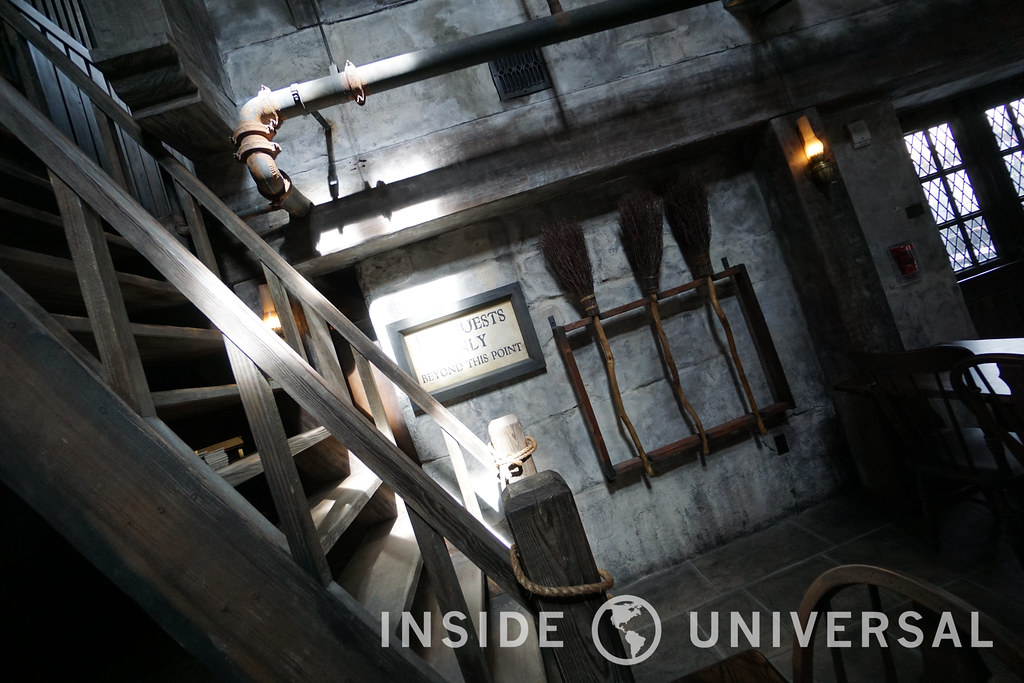 Architecture aside, guests can enjoy a variety of dishes personally selected by J.K. Rowling. These dishes – which range from fish and chips, chicken and Shepherd’s Pie – are all basic meals that one would find in Scotland. Unlike the rest of Universal, no Coke products can be found in accordance with J.K. Rowling’s wishes to keep the land – including the drinks – as authentic as possible. It simply wouldn’t be appropriate to have a Sprite in Three Broomsticks, and neither Harry Potter nor his friends would have been served a Coke soft drink in their time in the Wizarding World.

Finally, guests can enjoy specialty brews such as Dragon Scale, Hog Head’s Brew, Wizard’s Brew and a variety of English beers and Scottish drinks can be found at the dark and menacing Hog Head’s pub, just a few steps away from the main serving area of Three Broomsticks. On, and in keeping with Gilmore’s dedication towards authenticity between the land and the films, the animatronic hog’s head was created using a mold from London used in the films.

With retail, the creative crew used a similar obsession for detail as a drive to produce similar results. Fan favorites such as Chocolate Frogs were recreated in retail form, while lesser-known items – like the Eyeball Bonanza – were created with the assistance of J.K. Rowling to fill shelves with authentic British and Scottish sweets. Even the smallest of details like the fabric used on the seats of the Hogwarts Express photo opportunity were directly lifted from the film to create the most immersive and authentic experience available. 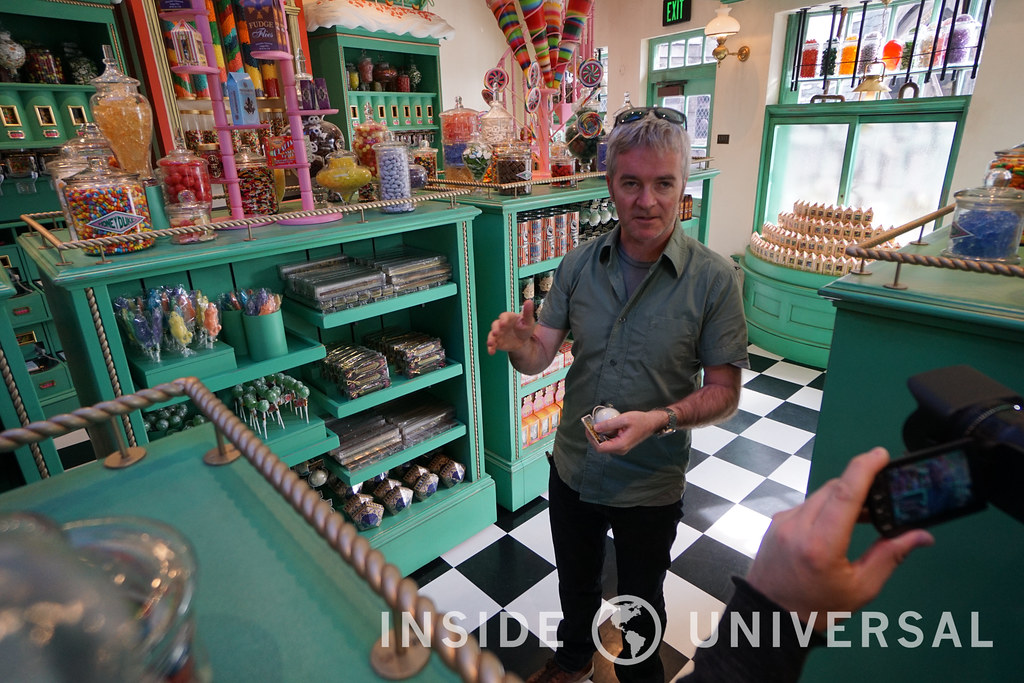 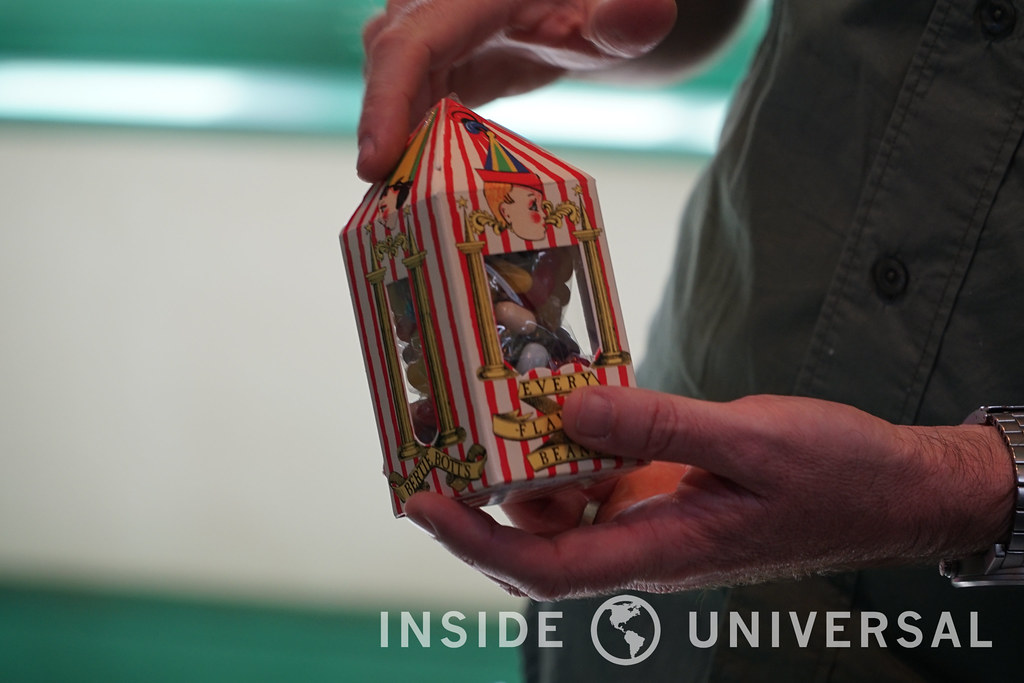 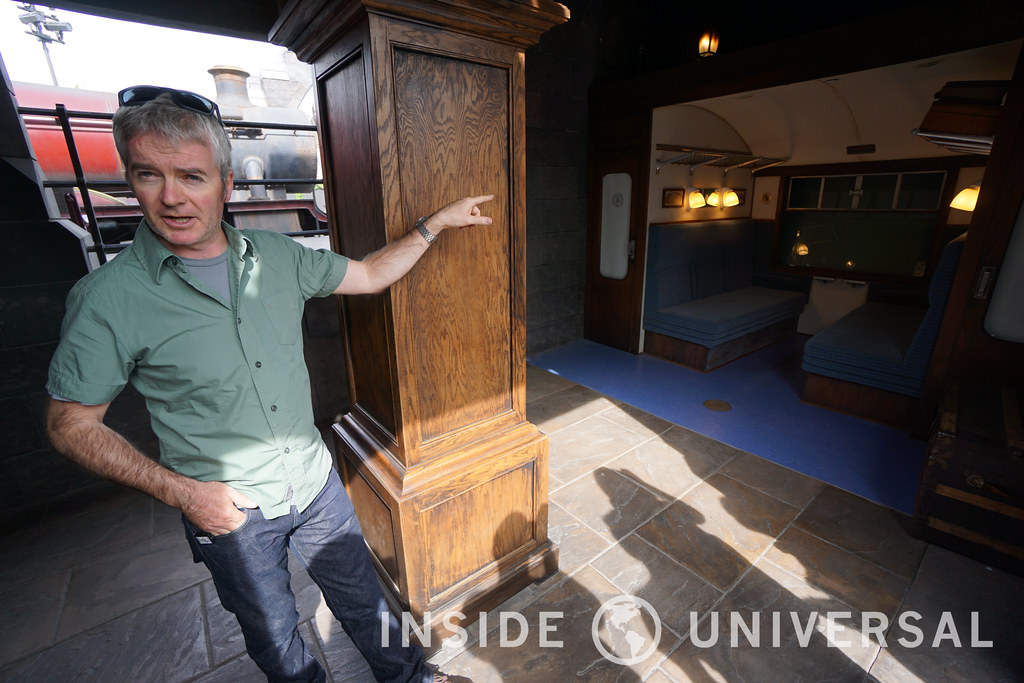 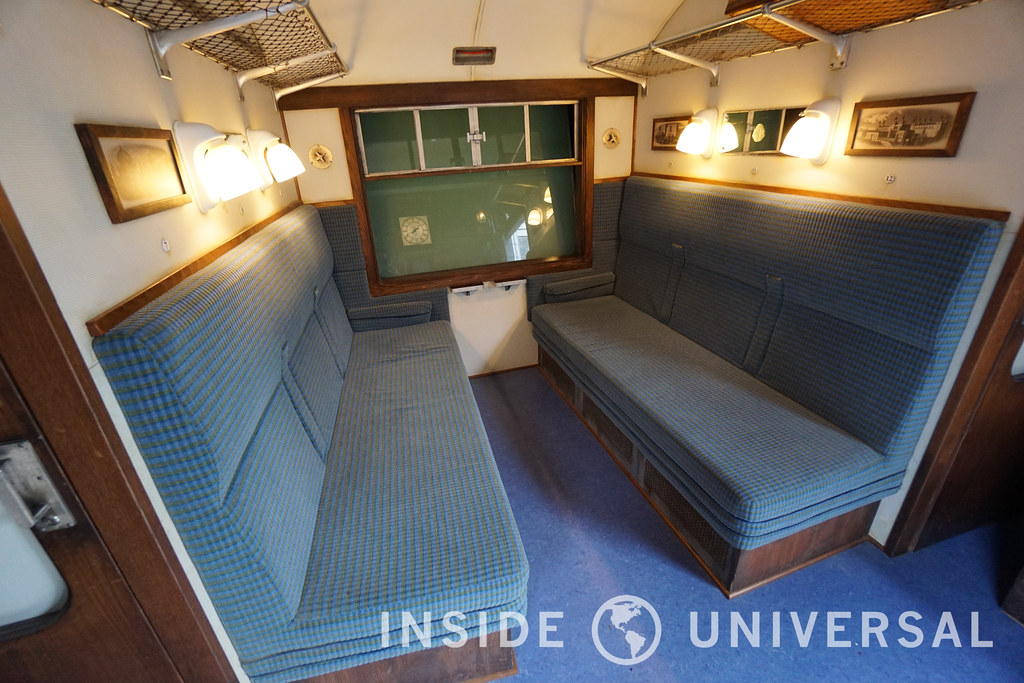 Indeed, this collaborative effort between the film team, the theme park and the author allowed the film team and Universal Creative worked in unison to create a host of products and experiences that only are found in the Wizarding World. Nowhere else in California can guests purchase house sweaters made in Scotland, or have their letters mailed and stamped by the Hogsmeade Post Office. 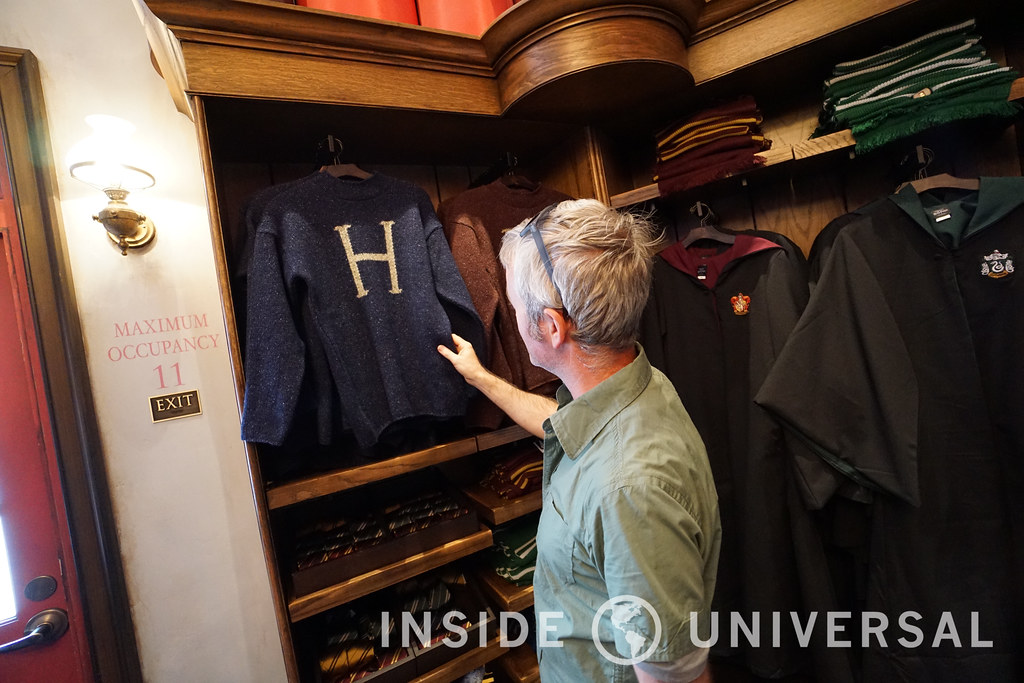 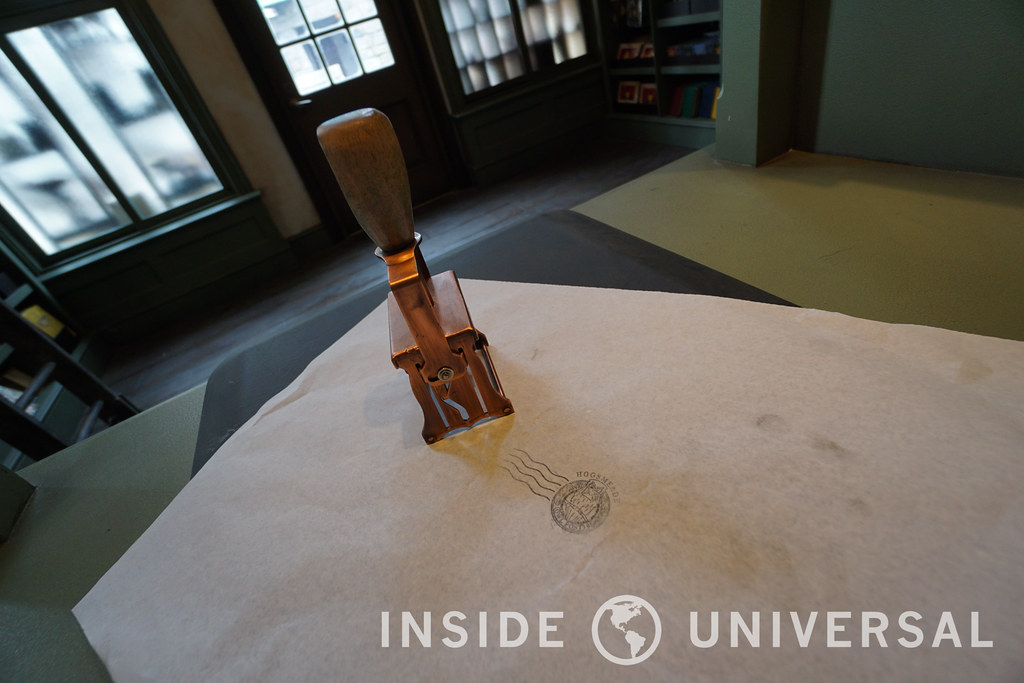 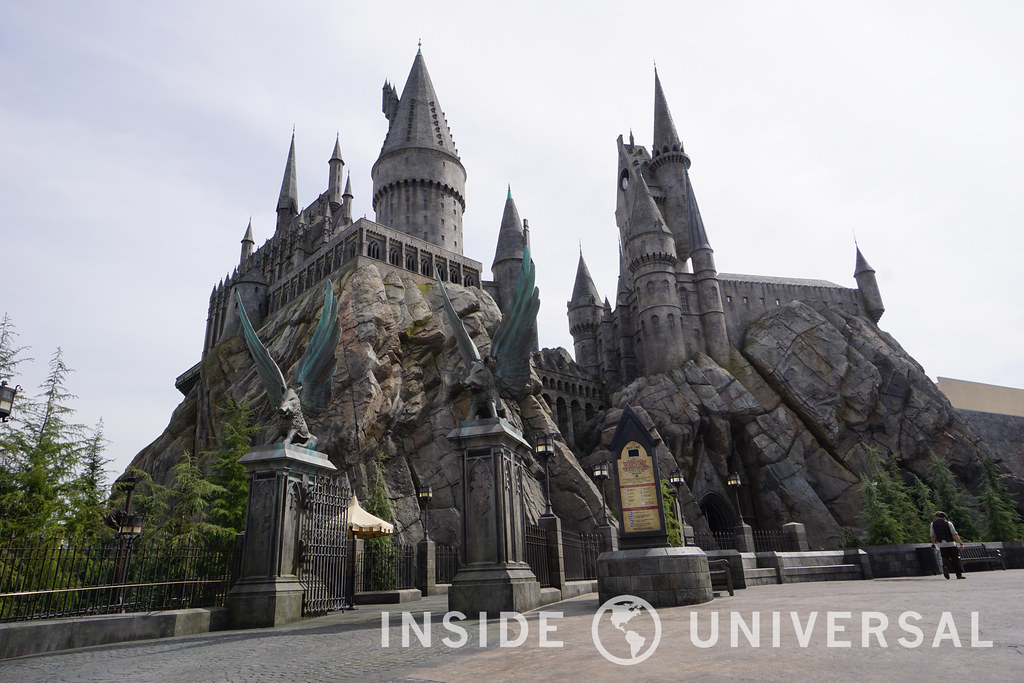 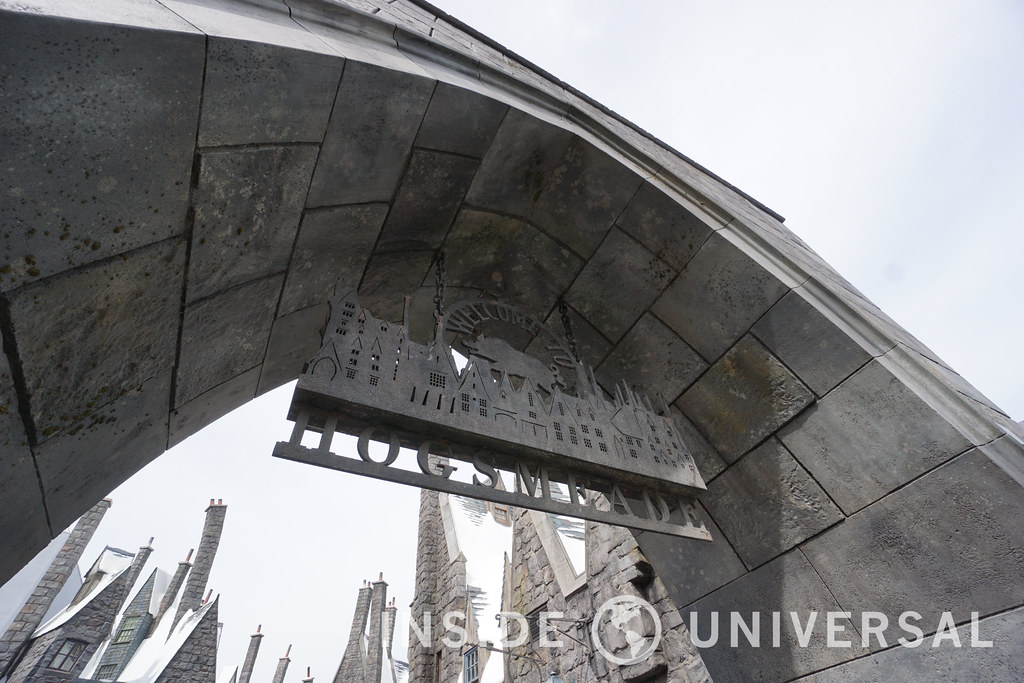 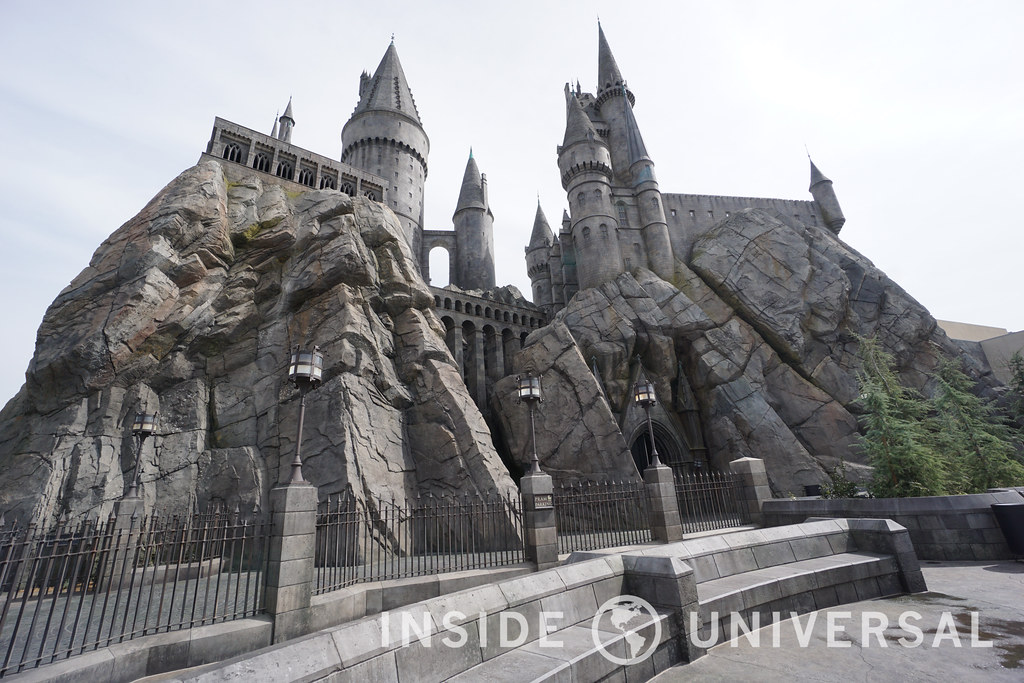 In closing, Alan Gilmore and the team at Universal Creative have achieved what was then thought of as an impossible endeavor just a few years ago: recreating the fanciful world of Harry Potter at Universal Studios Hollywood. While there are admittedly some imperfections brought upon by the land’s surroundings, age – as Gilmore notes – will eventually resolve most of those issues as time passes by. And given Hollywood’s tiny footprint relative to its peers, it’s a miracle they managed to fit Hogsmeade in the middle of the Upper Lot. That, in itself, should be commended.

The Wizarding World of Harry Potter opens at Universal Studios Hollywood on April 7.