Hot on the heels of last weekend, John Murdy and Chris Williams returned to the stage – this time at ScareLA – to go into detail about some mazes that will be appearing at Halloween Horror Nights 2016. While last week focused on the big four villains in their trio of mazes, this week focused on The Exorcist and the recently revealed Krampus maze.

On the topic of Krampus, Murdy surprisingly acknowledged that fans had correctly guessed the intellectual property of the maze before their official announcement. It wasn’t difficult, of course, given the icicle-covered facade on the New York set (something he didn’t consider until it was too late).

Murdy then proceeded to detail a short history of the Krampus, focusing on how the character is essentially the antithesis of Santa Claus, where bad children are taken to hell. To contrast Halloween Horror Nights’ trend towards adopting well-known horror franchises, Murdy revealed that the creative team had been planning to make a maze based on Krampus that wasn’t based on a specific franchise or film – something that’s become a scarcity in recent years in Hollywood. However, when Michael Dougherty approached him about a film dealing with the dark Christmas figure, the deal – as you would imagine – fell right into place.

The facade for Krampus will be special this year – not just because of its iconic status within the horror genre, but also with regards to the way it’ll move. As guests wait in line, the story of Krampus will be told. As his name is uttered, he will appear on the roof of the maze’s facade. Additionally, John Murdy’s Twitter followers can interact with the frozen delivery man from the film. If you follow Murdy closely, you can exchange the daily Twitter password for a small souvenir. Here’s a hint: it’ll be a retro-themed Christmas card with you-know-how gracing the front. 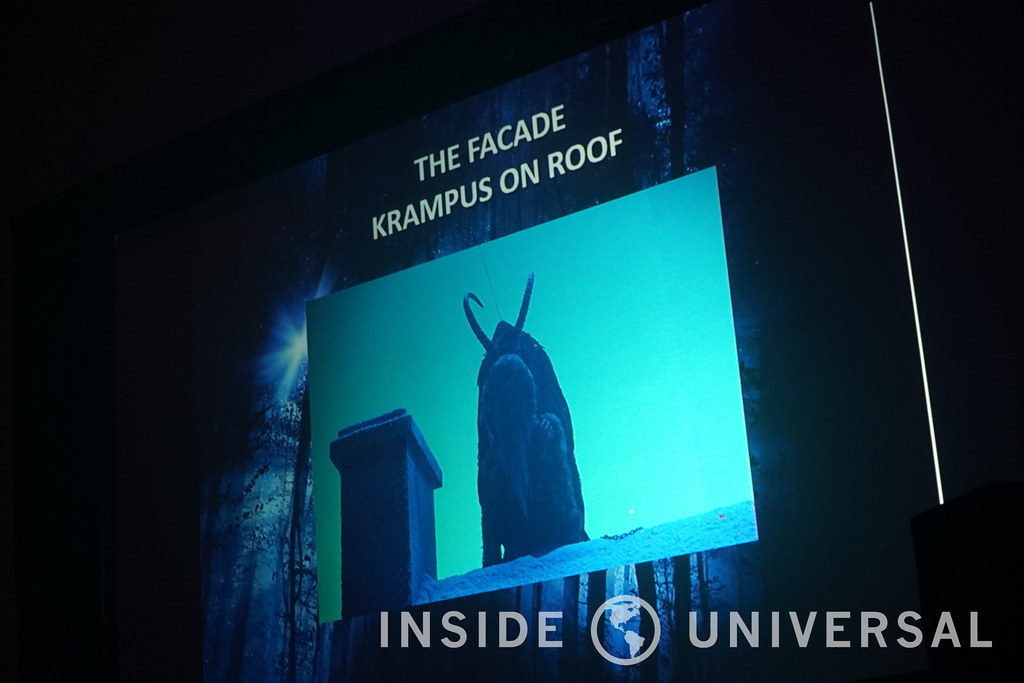 Nearly complete internally, the maze is shaping up to look frozen-over inside with copious amounts of snow and icicles around, with the aim to authentically recreate props and scenes from the original film. Family photographs have been reproduced and gingerbread men have been made and expanded on from their initial film roles. Some rooms in the movie will be visited upon twice – pre and post the freeze.

Sadly, as we’ve noted earlier, the introduction of Krampus means that the beloved Dark Christmas scare zone will not be making an appearance at this year’s event – partly due to the logistics surrounding The Walking Dead Attraction.

Following an overview on Krampus, it came time to discuss the property Murdy had been chasing for over a decade. He has been no stranger to talking about his love of The Exorcist and his attempts to capture the franchise in the 11 years he has worked on Halloween Horror Nights. Interestingly enough, on the day they received the approval, Murdy had realized he had no clue how to make a walkthrough maze of a film that almost entirely revolves around a single room.

The reason The Exorcist was so near and dear to Murdy’s heart was in relation to his Catholic upbringing and his family’s involvement with the church. Without elaborating on the specific reason, Murdy pressed that the original banned trailer for the film will play a key part in the maze, somehow helping to provide a way to transition between scenes. 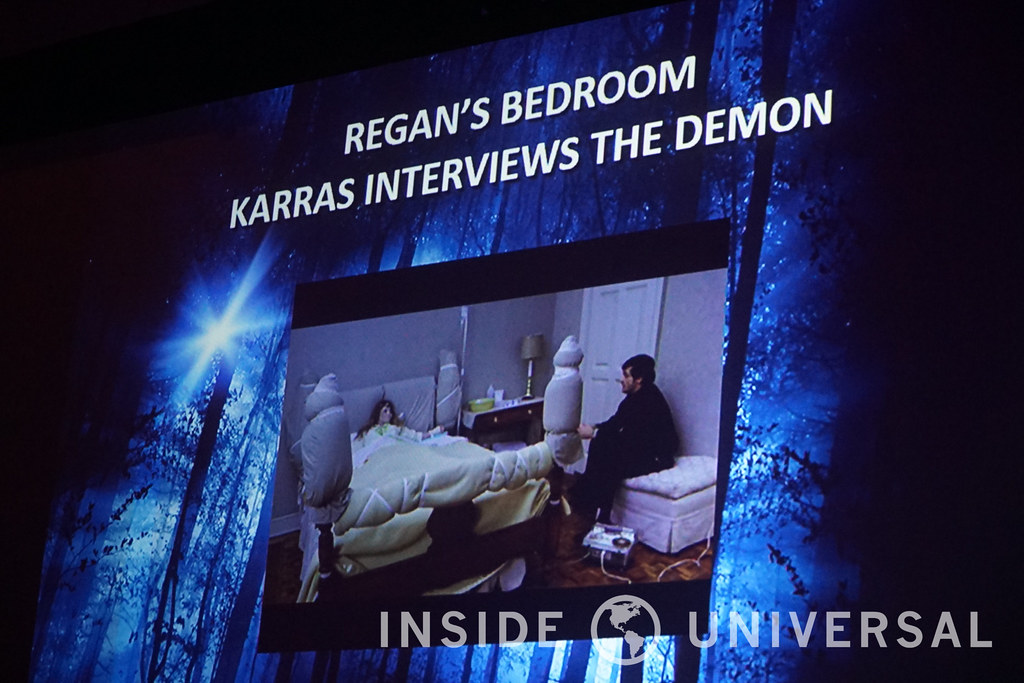 For The Exorcist’s facade, the famous shot of Father Merrin in the light on the window will be painstakingly recreated with carefully placed lights and fog – with the ultimate hope that the California weather will do little to disturb the effect. And building on the discussion of black-out actors from last week, The Exorcist maze will primarily consist of black-out actors all working together to make the various effects from the film come to life – with traditional actors visible in the maze. Every memorable scene in the film was pointed out, from the vomiting to the head turning. The actors heads have been remade into latex masks and look quite realistic, so expect to see the characters themselves in the mazes.

But while most of the Exorcist takes place in the bedroom, not all of it does. The opening scene is based in Iraq with Father Merrin finding the statue of Pazuzu. Pazuzu came up a few times in the discussion of the maze, but no concrete details surrounding it were mentioned, so it’s still unknown what kind of role that scene will play in the maze – if any.

Shortly after wrapping up the discussion of The Exorcist, Murdy went into details on the new Purge Election Year scare zones, being the single theme for all scare zones, park-wide, and being part of a new larger gauntlet-type scare zone in the Parisian Courtyard.

Ultimately, it’s clear that Murdy is more proud of the maze lineup this year than any other, and there’s still one more maze yet to be revealed. Now that the convention season is wrapped up, there’s no scheduled events left to wait on for revealing the final aspects of Halloween Horror Nights, meaning they could come at any time. That, of course, means you should keep an eye on Inside Universal for all the latest Halloween Horror Night news.