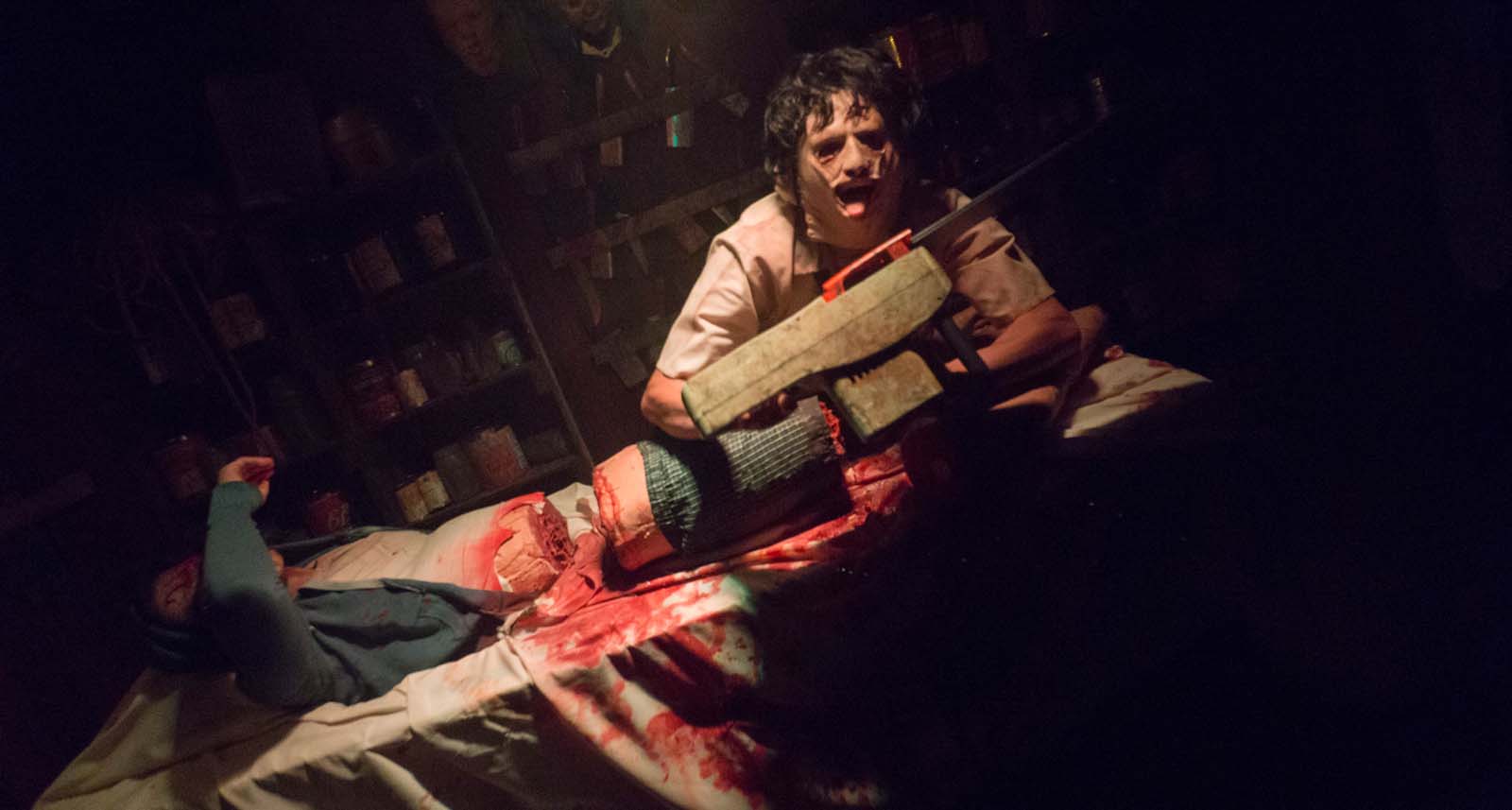 Taking place between the 1974 film and its sequel in 1986, The Texas Chainsaw Massacre: Blood Brothers acts as a bridge between the original film and its sequel – much in the same vein as this year’s Halloween maze. Not only do guests have to dodge Leatherface in the perils of the Lone Star barbecue and the Sawyer household, but also his brother Chop Top who has reunited with his family from Vietnam to search for new meat for their barbeque restaurant. 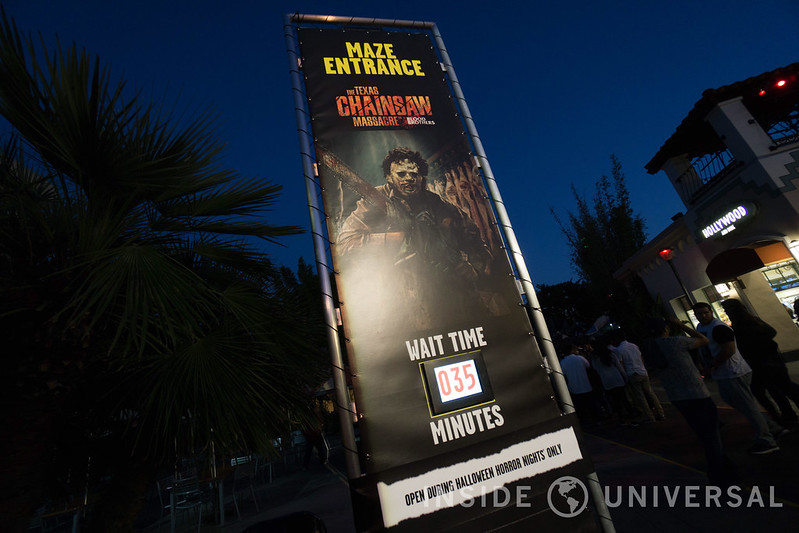 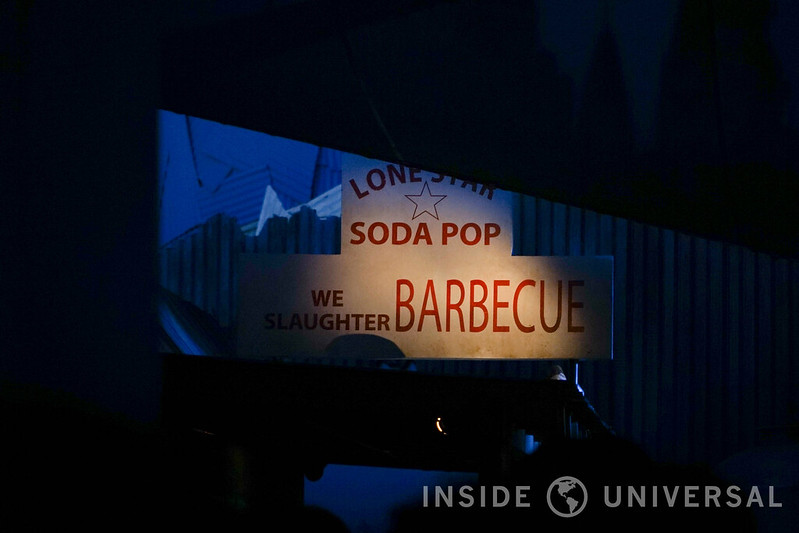 Located inside the WaterWorld queue, Texas Chainsaw is located in one of the more awkward locations in the park. With the façade facing towards Gregor’s tower, the maze entrance – modeled after the Lone Star Barbecue – manages to pack in quite a bit of detail in an otherwise small and compact space. Plus, if you listen closely, you might be able to hear some eerie folk songs from the early 1900s, setting the mood perfectly for what lures inside. Add a bit of darkness from the nighttime sky, and you have the perfect ambiance for a Texas Chainsaw maze.

Beginning with the Lone Star Barbecue (where the Sawyer family is all too happy to welcome their new victims, er, customers), this maze – unlike Halloween or Freddy vs. Jason – starts off with a bang, with scares beginning almost immediately after the first scene. While there is a brief interaction with the Sawyer in the first scene, Texas’ primary component are nestled in its scares, with gruesome imagery reminiscent of previous Texas Chainsaw mazes scattered about. 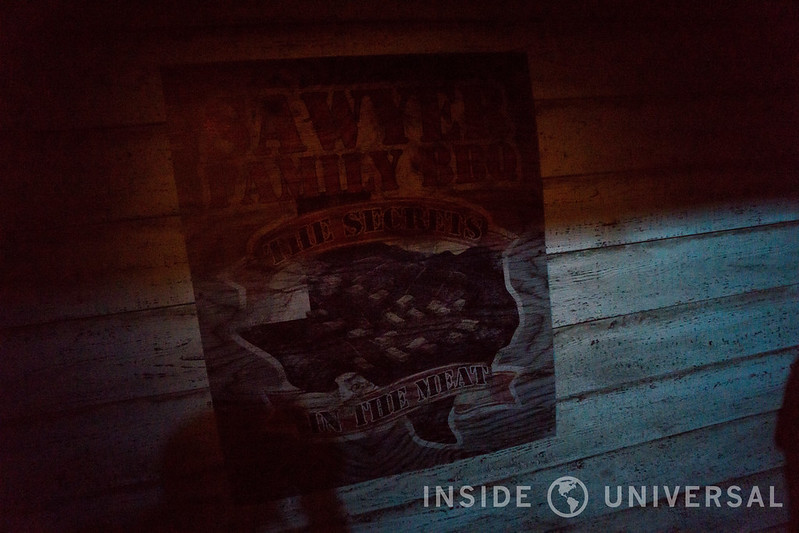 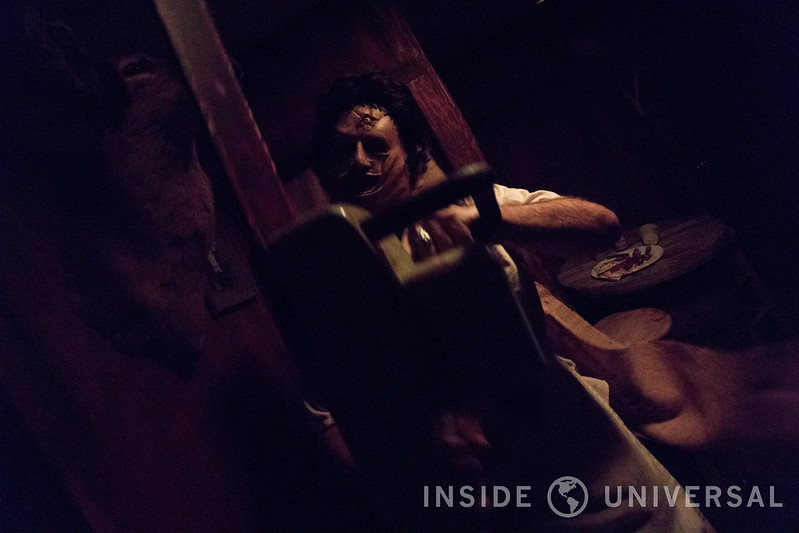 Being that this is a Horror Nights maze, homages to the film – such as Leatherface’s face peeling scene – are scattered throughout the walkthrough. Close observers will also notice the dining table, with grandpa trying his best to bash a girl’s head in with a hammer – a gruesome image for sure, but certainly a normal occurrence at Halloween Horror Nights. Of course, of all the mazes on this year’s roster, Texas Chainsaw – expectedly enough – retains the award for the most gruesome imagery at this year’s event. We think it’s safe to say that Texas is most certainly this year’s most intense maze, keeping in accordance with 2012’s notoriously scary The Saw is the Law.

With all of that being said, this maze does suffer from a few inconsistencies. The character of Chop Top – bustling with potential – seems to be lost in the background. Unless you’re intimately familiar with the Texas Chainsaw franchise, Chop Top is almost interchangeable with Leatherface. The character is supposed to not only scarred by the Sawyer family, but also by the horrors of the Vietnam War. Save for Chop Top’s brief psychedelic bedroom (which is indistinguishable from the rest of the maze save for a few LED portraits), Blood Brothers doesn’t really mention much of his background or why he’s included in this year’s storyline. On top of that, Texas’ scares were also eerily similar room-to-room. While The Exorcist certainly suffers from the same repetitive scare syndrome as Texas, its saving grace lies in its heavy use of animatronics and varied effects to recreate iconic images from the film. Texas Chainsaw, already in its third appearance at Halloween Horror Nights, doesn’t really differentiate itself from its previous incarnations. 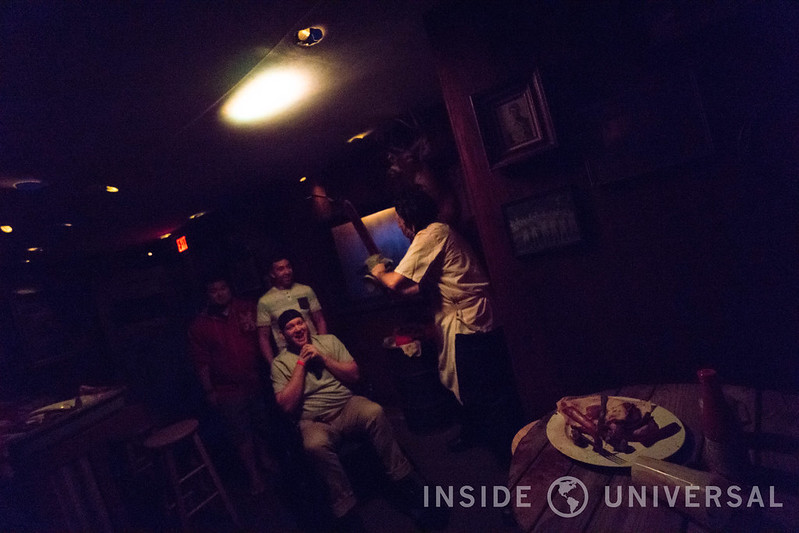 In closing, Texas Chainsaw Massacre: Blood Brothers is certainly a strong maze in its own right, but when pitted against The Exorcist and American Horror Story – two new inductees in the Horror Nights canon – its strengths in scares lose a bit of their luster in the wave of this year’s emphasis on scenes and elaborate set recreations.

That being said, if you’re looking for a traditional jump-scare intensive experience, Texas Chainsaw has it in spades. 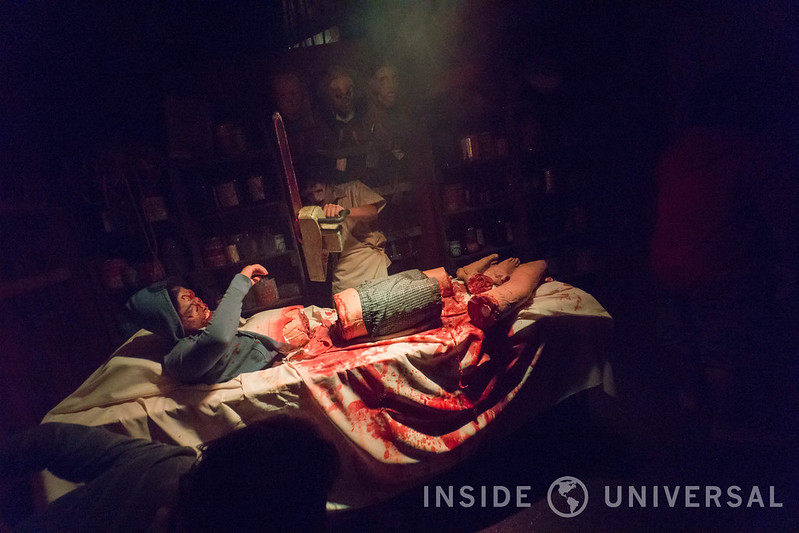 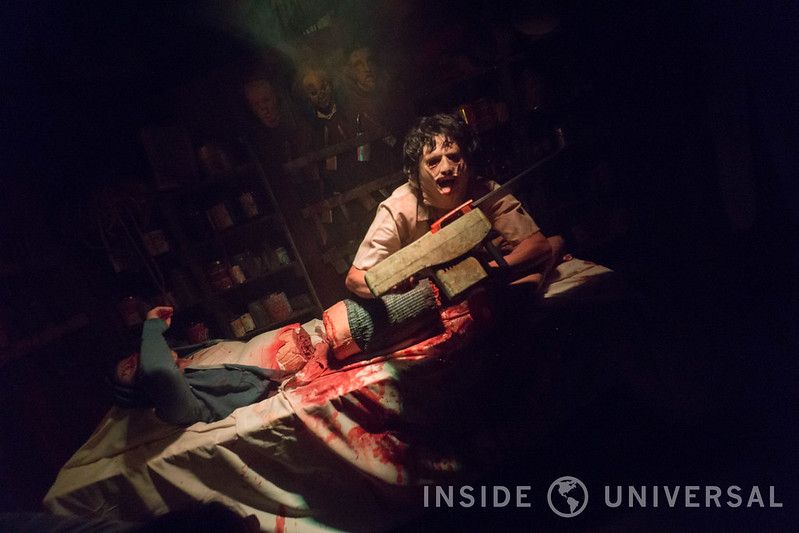 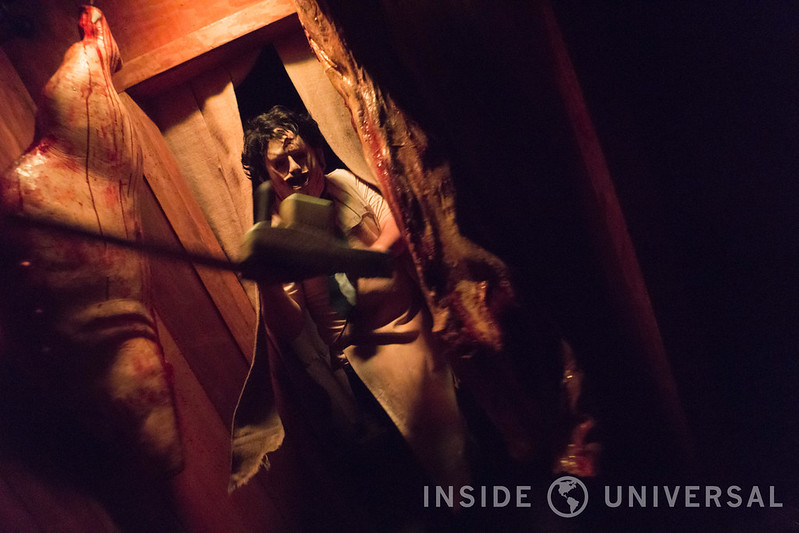 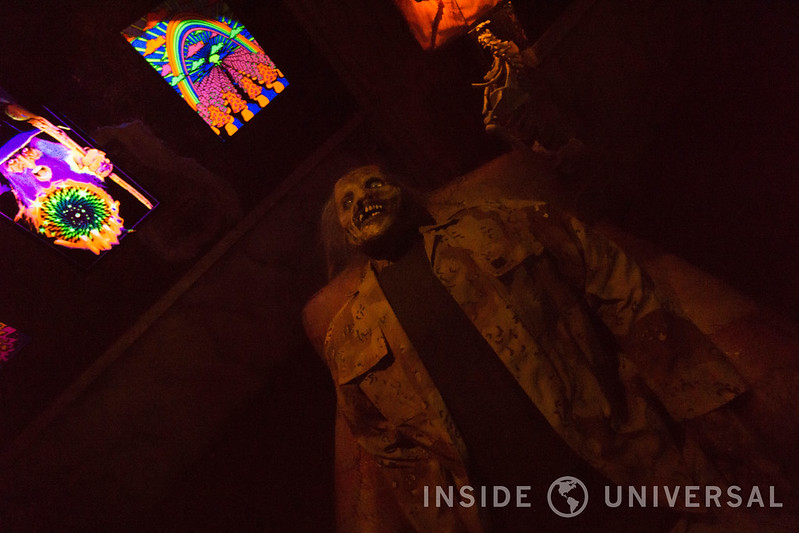 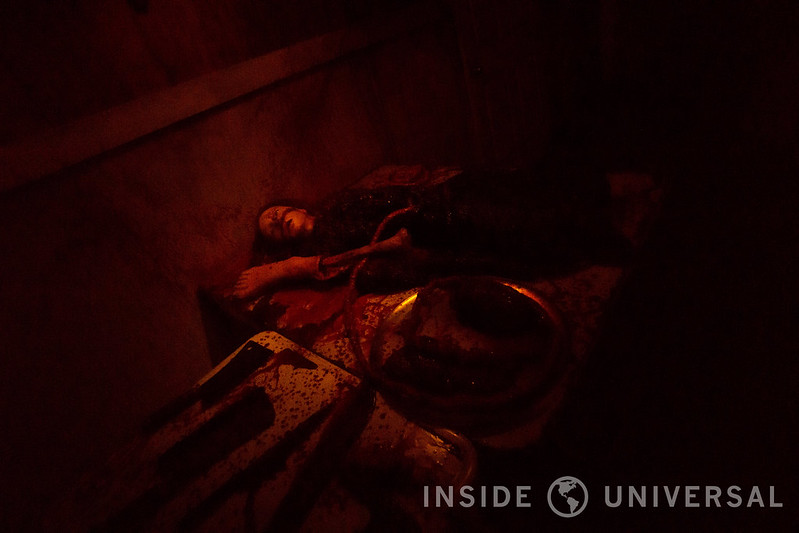