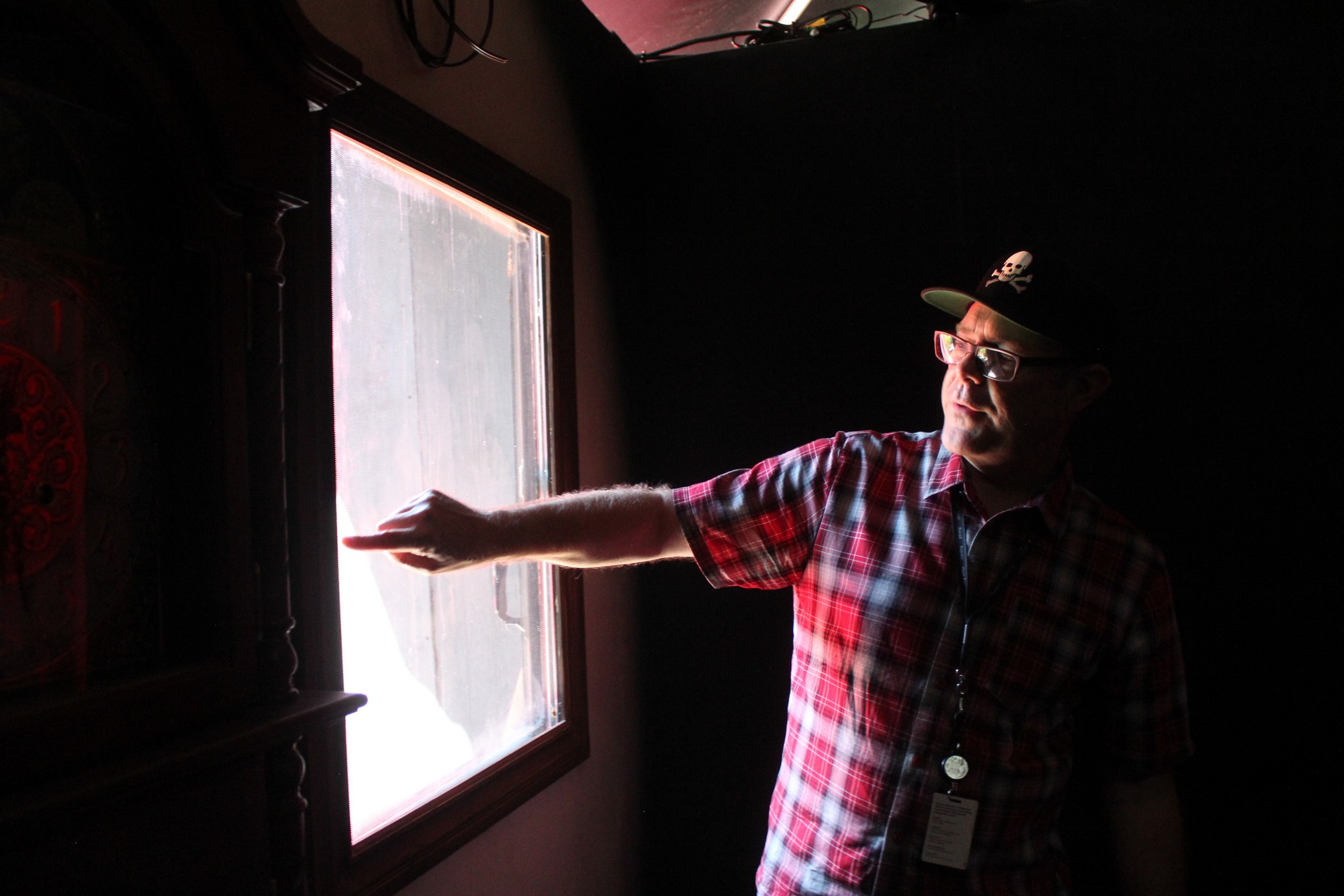 A couple of weeks ago, Inside Universal got an an exclusive look at two mazes with Halloween Horror Nights Creative Director, John Murdy – seeing the set installations of The Shining and Insidious.

Heads up! In the article we will be mentioning plot points to a future film release and to the mazes themselves. We will not discuss everything we saw inside the mazes to leave some surprise for those who will be going to Halloween Horror Nights this year. 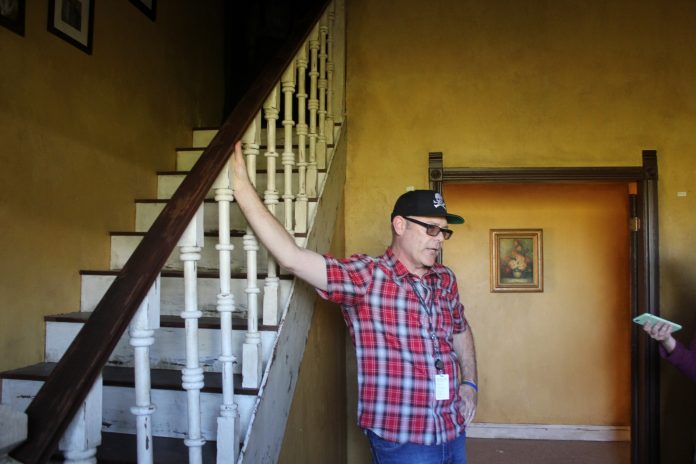 The first maze we toured was Insidious: Beyond the Further. The maze is located inside the Jurassic Park extended queue – and will focus on the fourth film, but also include scenes from the previous 3 installments.  While the movie doesn’t come out till January, Murdy mentioned that long-time collaborator, Jason Blum, founder of Blumhouse Films, says, “This is the ultimate trailer for his movie.”

The plot of the film features the return of Elise Rainier, who realizes the house she is there to investigate is her childhood home, and becomes apprehensive about investigating since it was the beginning of her experiences with the paranormal and “The Further”.

As you walk into Elise’s childhood home, you’ll enter the living room – which features Duck Face Boy at the top the stairs. As you move onto the next room, you’ll enter the Further, which will take you into the spirit realm and will be used as an opportunity to visit some of the other characters from the previous films in the franchise. As you continue on, you’ll eventually come face-to-face with the Key Face Demon – the main villain in the new film. 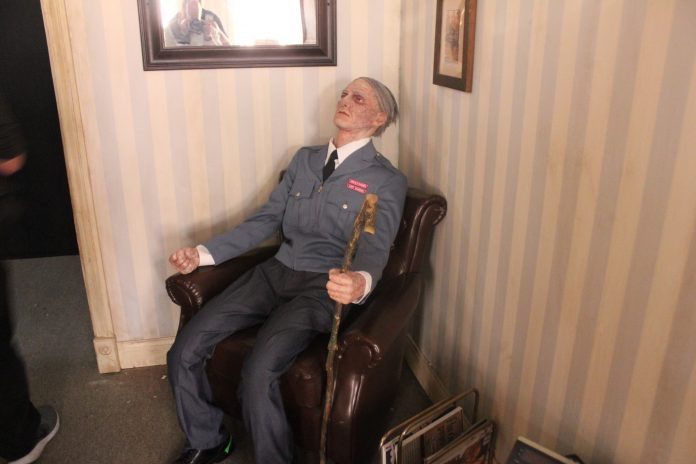 One of the highlights of any Halloween Horror Nights mazes is the many scents you’ll smell as you make your way through the mazes. In Insidious, the laundry room will feature the aroma of soap and detergent.

Since the film takes place in the 1950’s, you’ll enter the Rainer home’s bomb shelter. As you move into the next scene, Elise’s mom will be hanging from the ceiling as she is wrapped up by a bunch of cables that come to life and kill her.

As fans of Insidious will know, you can’t have a maze without the iconic song Tiny Tim song, “Tiptoe Through the Tulips” – which will return as background music as you head into the Lipstick-faced Demon’s lair. 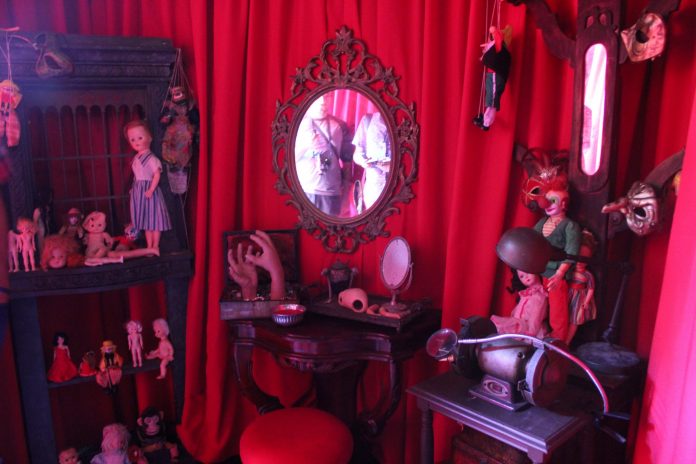 From there you’ll move into the second film, where you’ll encounter “The Bride in Black”. Unlike the previous maze, Murdy decided to set the scene in the Further. The wallpaper is peeling and the room looks more dingy and decayed.  Eventually, guests will continue on in the maze and encounter the “Man who can’t Breate”, and run into the Key Faced Demon once more.

One of the many interesting facts that Murdy mentioned to us was that over the course of each maze that he develops with creative partner Chris Williams, they will look over 30,000 photos.

Afterwards, we were able to ask Murdy a couple of questions about Insidious: Beyond the Further.

Inside Universal: What is about Insidious that relates to fans?

John Murdy: Obviously, there is a lot of paranormal movies that kind of came out around – well, it started with Paranormal Activity then Insidious, and then many many others. What’s different about Insidious – is that James Wan in the first film and Leigh Whannell, the writer, made the ghost characters, physical characters that could enter our world and affect us; and that worked really well for a maze.

Unlike Paranormal Activity, where it might be a door that just opens and shuts; that’s creepy but not scary like you need in a maze. I think James Wan is the most talented director that is making horror movies today. Everything he has done, from the original Saw, Insidious franchise, Conjuring, he makes fantastic horror movies.  You really pay attention to detail when you work with one of James’ movies.

A lot of times the audio design plays a big factor in that, I noticed that in the first film particularly, he uses the sound from the grandfather clock just to start that tension. I remember that first time I sat down with James, and we were working on Insidious and he mentioned that he didn’t want a scare in the first scene – and it made perfect sense for the way he makes his movies.  It was like a throwback to the older days of a slow burn before all hell breaks loose. And that’s why you don’t see a scare in the first scene, it’s more of a set-up of the story and what’s going to happen.

And every Insidious movie introduces new characters and they’re always very interesting, and I don’t think anyone necessarily thought “Oh, I’m going to use Tiptoe Through the Tulips to be in my scary movie”, it’s such a weird choice, but I don’t think you can hear that song and not think of this movie. It’s just a brilliant use of music.

IU: How difficult is it to develop a maze with the film not having been out yet?

JM: Yeah, it’s particularly tough on the audio post-production side, and also the video post-production side. Normally, I’d go, “I need the pro-tools, final session of the movie, split audio tracks, dialogue, effects and music.” – then I can take that movie and pull every single stem of dialogue, effects or music, and I can put it back together the way we’re going to use it in the maze.

When it came time to do that with Insidious, I started talking to their post-production team, they weren’t done…they were nowhere near done. So in a lot of cases, they would give me elements that they were going to use for a sound effect for a particular character and tell me what they’re going for and I’d have to reinterpret it.

And the character too, the main demon character has some part of his face that’s digital and so one of the main things I had to do on that side, was that we had to sculpt this, I need to know what it looks like, and they weren’t done. So we had to get concept art and in some cases pre-vis(ual), look at it and talk to them and figure out what’s this supposed to look like, sculpt it and send it to them and try to work collaboratively that way.