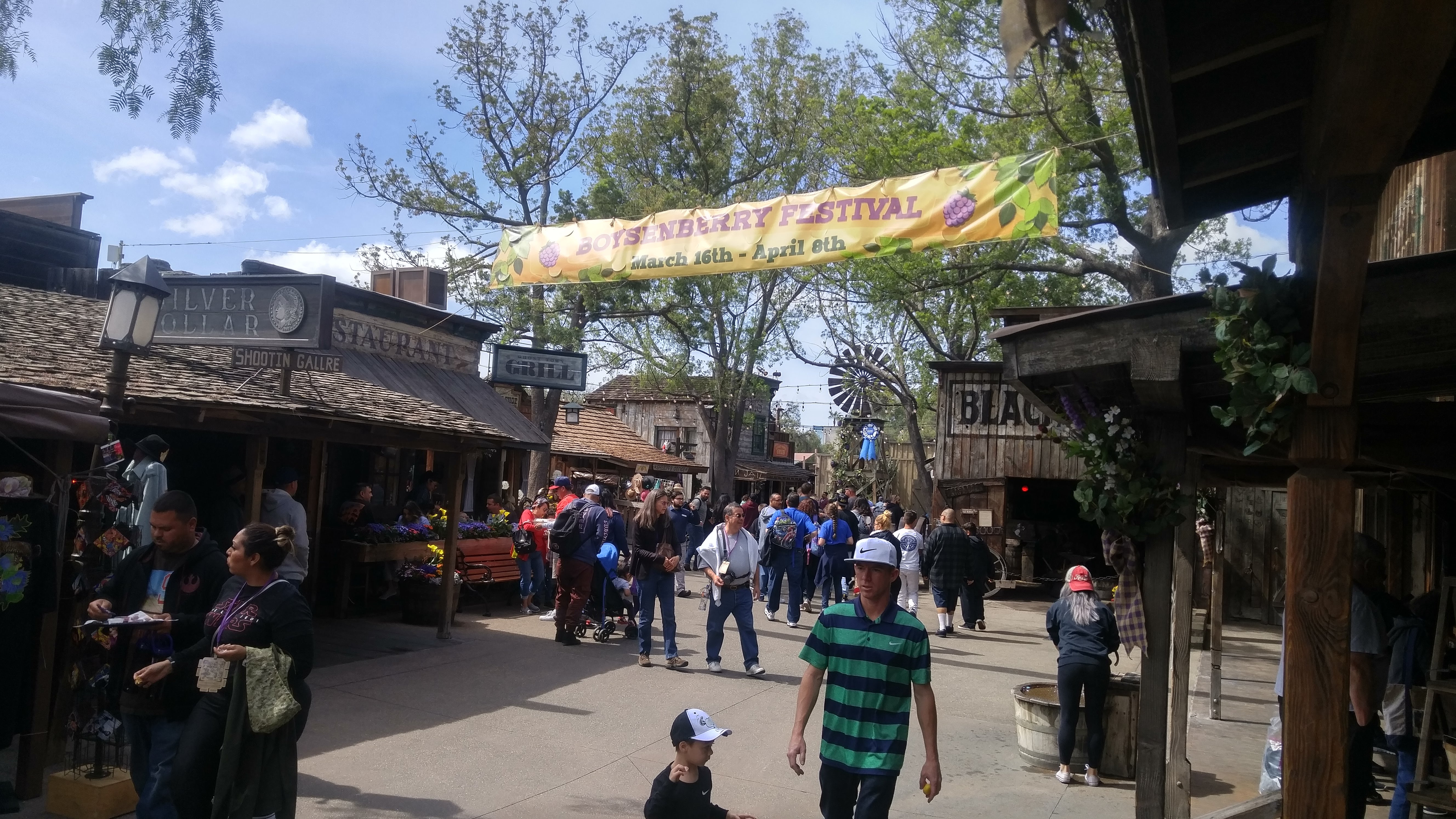 Home Outside Universal California Knott’s Boysenberry Festival Returns for 2018
Share
Facebook
Twitter
Pinterest
WhatsApp
ReddIt
Email
Knott’s Boysenberry Festival has returned for 2018. What started five years ago as Knott’s Berry Bloom has become a bigger event each year. While it’s always hard to avoid boysenberries year-round at Knott’s, during the festival, it’s the focal point of the park. 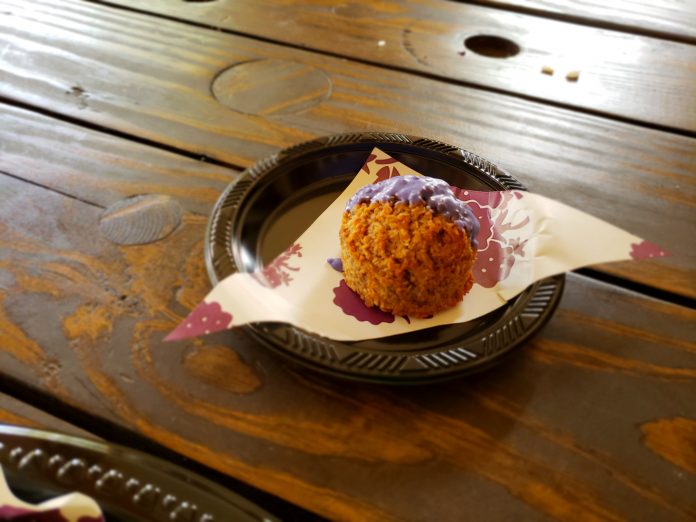 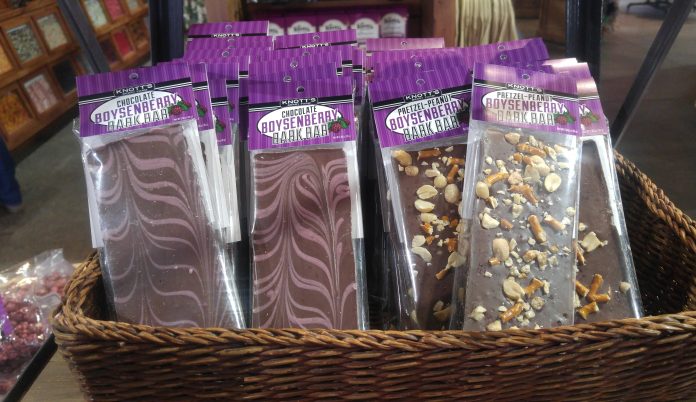 The two basics of this event are the food and the entertainment. I’ll cover the food first. Rather than have the offering in central locations, it instead is a park-wide hunt for what’s available. Boysenberry chicken wings are near the bakery. Boysenberry macaroons are in the bakery. Boysenberry Boba Tea is at the Coffee House near Iron Reef. Some of these locations are easier to find than others. Some are independent booths added for the event while others are just additional menu options at existing locations. 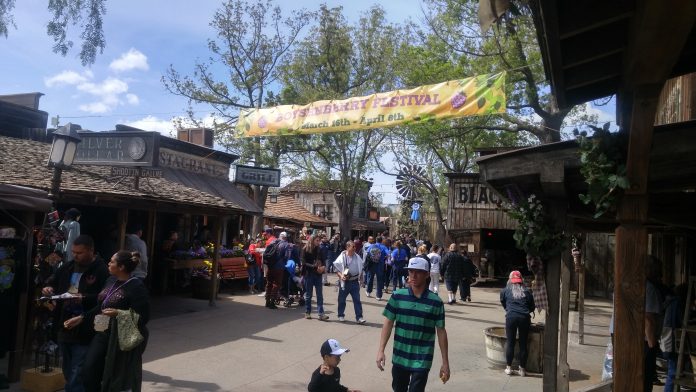 The “tasting card’ has become a staple of food-themed events in theme parks, and Knott’s makes sure to have it. For $30 you get a card with a map of the item locations and 8 vouchers to use how you see fit. Coincidentally, there are 8 different items, but you aren’t forced to use it on 8 different items. If you want 4 boysenberry sausages and 4 boysenberry macaroons, you are free to do it. 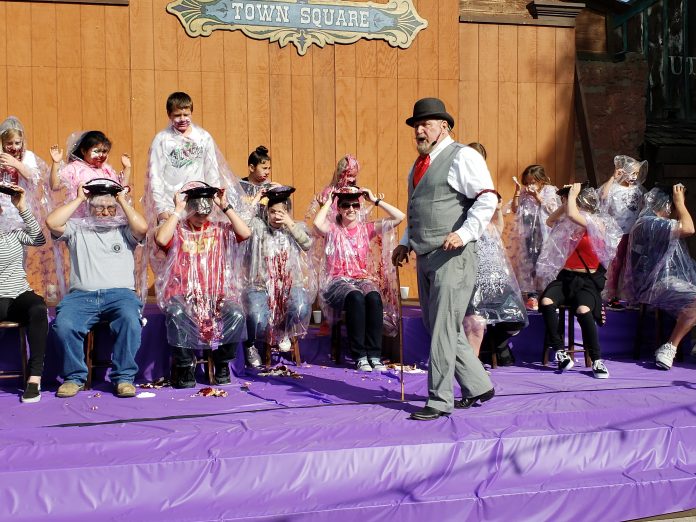 If you’re brave enough to participate in the pie eating contest, go for it! Or just watch. It gets messy, which just makes it even better.
Personally, we enjoyed the sausage, elote and pierogies, and the aforementioned macaroons. It’s worth pointing out that these are sizable portions, too. Typically in California Adventure, we’ve been a bit taken aback at the small portion sizes during their festivals, but that wasn’t an issue here. As such, it’s probably best to share a tasting card with another willing partner or saving it for another trip. 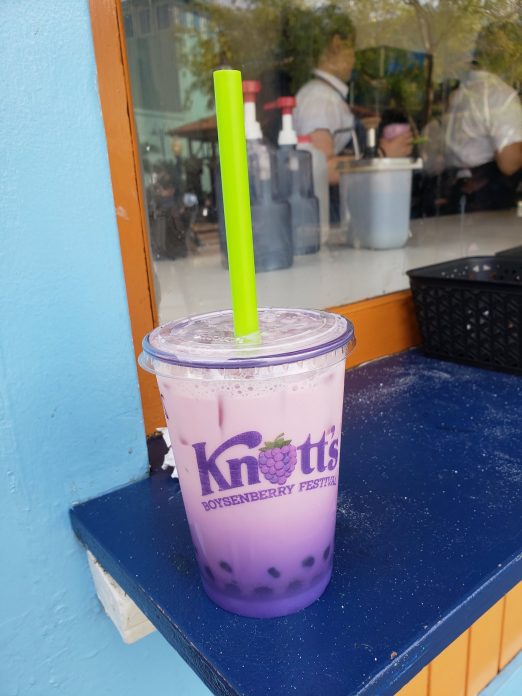 But not all the boysenberry goodness is limited to the card offerings. The boba tea at the coffee shop is about five dollars, but worth every penny. There’s no shortage of boysenberry boba inside. And inside the Ghost Town general store, you’ll find the first ever Boysenberry-flavored Jelly Belly jelly beans, along with their regular supply of other boysenberry staples like honey, tea, soap and anything else you can think of.
The most surprising part of all of this is how we weren’t sick of the taste of boysenberry by the end of the day. I’m not sure how else to put it, but that wasn’t a concern at all even after spending the day gorging on a variety of boysenberry wines, boysenberry desserts, and boysenberry-flavored meats. It just felt natural. Nothing was overboard. 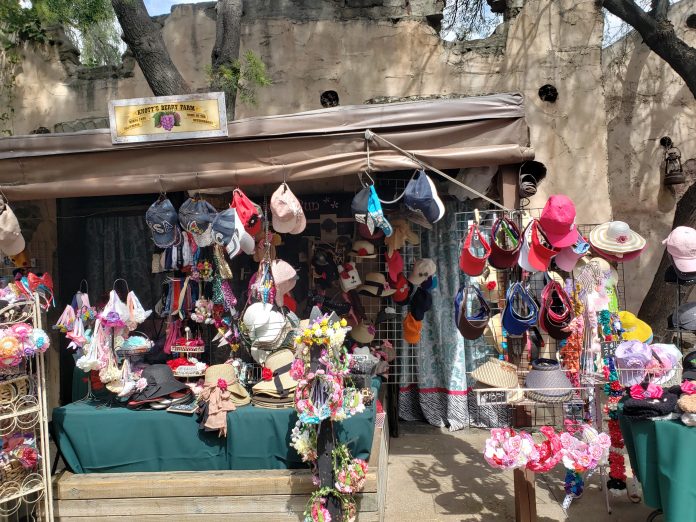 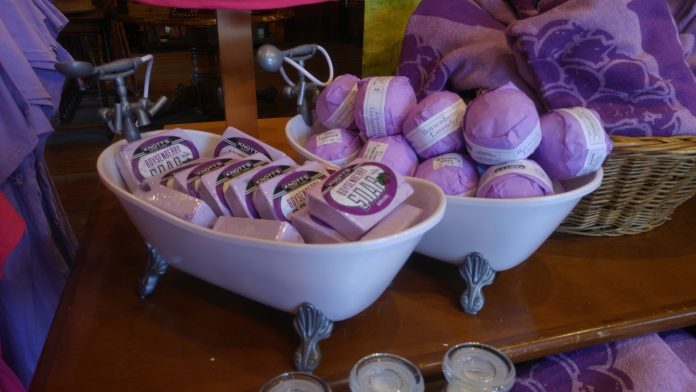 Mixed in with the food offering are also additional shops. Similar to how Knott’s does Christmas, all throughout Ghost Town are small pop-up shops with hand-made goods. Everything from aprons to jewelry. Of course, it wouldn’t be a theme park event without decorations. And those are all around with the one important berry.
The other half of this is the entertainment. This year, the entertainment has two halves. Depending on the time when the park closes, the entertainment offerings are either shifted or not offered, so make sure to remember whether you are visiting on an 8PM day or a 10PM day. (Of course, by the time you are reading this, the 8PM days have all finished) Our personal favorite house band, Krazy Kirk at the Hillbillies, are not around on the earlier days, but you can find out ahead of time by checking their schedule on their webpage.
This is also a special time for entertainment because it’s one of the few times of year when the Hillbillies play in the Wagon Camp, which is typically reserved just for the stunt show. In their usual home, at the Birdcage Theater, you’ll find a boysenberry-themed melodrama. While it’s the same show as last year, Knott’s has added beautiful LCD screens to either side of the stage which complement the show perfectly with the act, or when to cheer, boo and hiss. They first appeared for the Peanuts Celebration back in January and are a welcome addition. 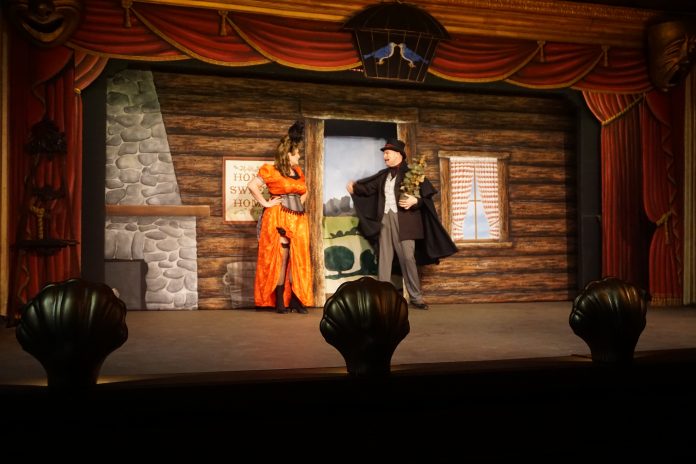 Inside City Hall, it’s been transformed into a little history center about the founding of the park, a great stop while you snack on your boysenberry treats. And just around the corner, in the red barn, is the wine tasting area along with a small art gallery of current and former park attractions. The art gallery was a really pleasant surprise and I would love to see it become a permanent fixture in the park. There were even prints for sale, but not expecting high demand, Knott’s only had a few available for each piece of art. 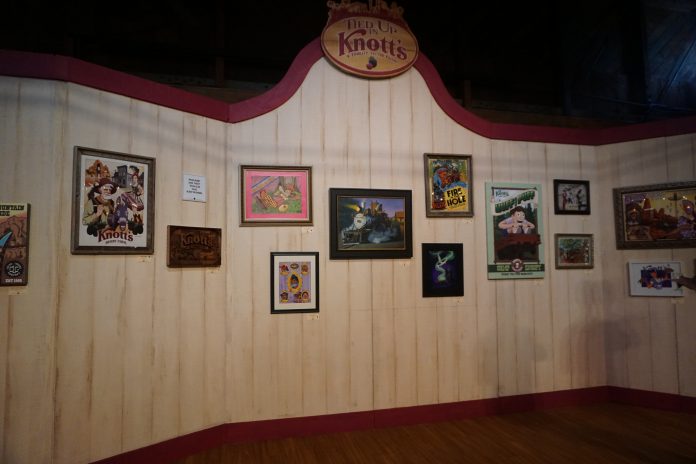 Towards the end of the day, there’s a show on the Calico Mine Stage, Snoopy’s Boysenberry Jamboree, featuring a lot of dancing, singing, and Snoopy. It’s a great show. 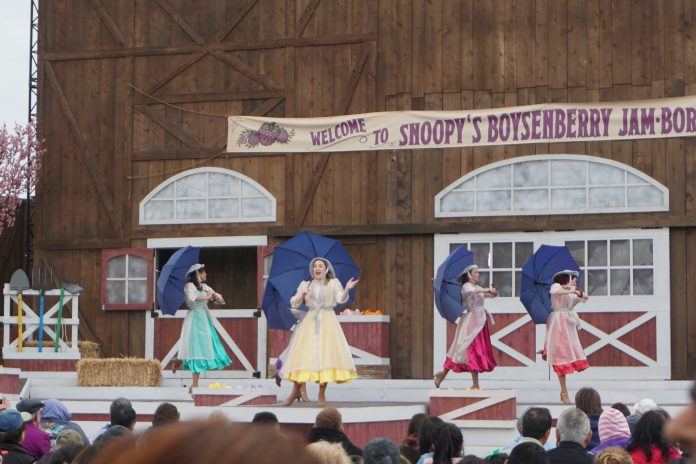 Our little favorite non-Boysenberry bit of the day was just relaxing, listening to the “Boardwalk Barbeque Rockin’ Duo” who play in the dining area of the Boardwalk Barbeque which opened last summer. Live music is always enjoyable, and the new bbq stage is a great new addition to the park. 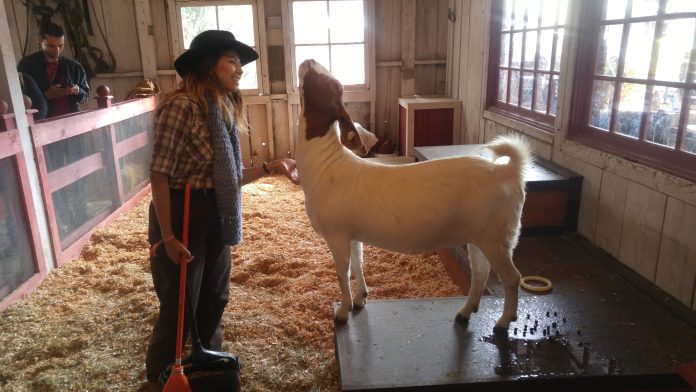 Overall, the Knott’s Boysenberry Festival is a fantastic way to spend a day in the park and something we continually look forward to every year. If we’d have any suggestions, it would be to have a more comprehensive map of Boysenberry food locations, as a lot of people were trying to hunt down the boba tea, which is also why we took the time to explicitly mention the location in this article. We’d also love to see the entertainment mixed up a bit more as it was very similar to the shows from 2017. 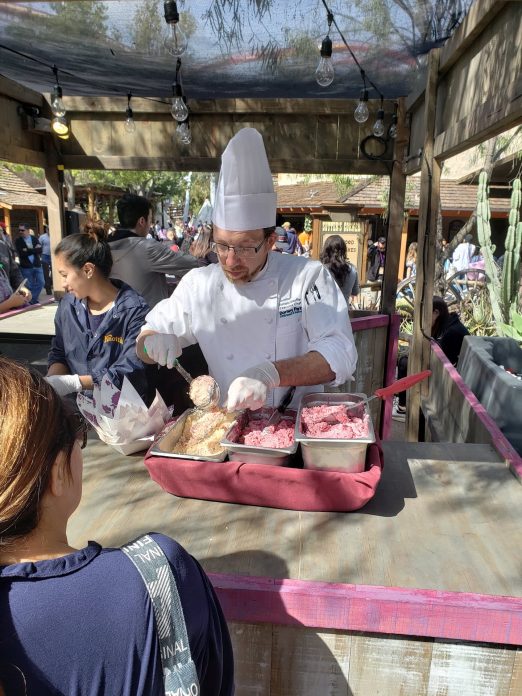 If you haven’t been to Knott’s in a while, you really really really should, and this is a perfect time to go. If you have, there’s enough new stuff to keep you busy for a day. The festival is running every day (including weekdays!) through April 8th and while a nearby resort has raised their annual pass prices again, Knott’s still has a very affordable season pass that’s under $100 with no blockout days.
Finally, for those keeping track, including this sentence, the word ‘Boysenberry’ appeared 22 times. 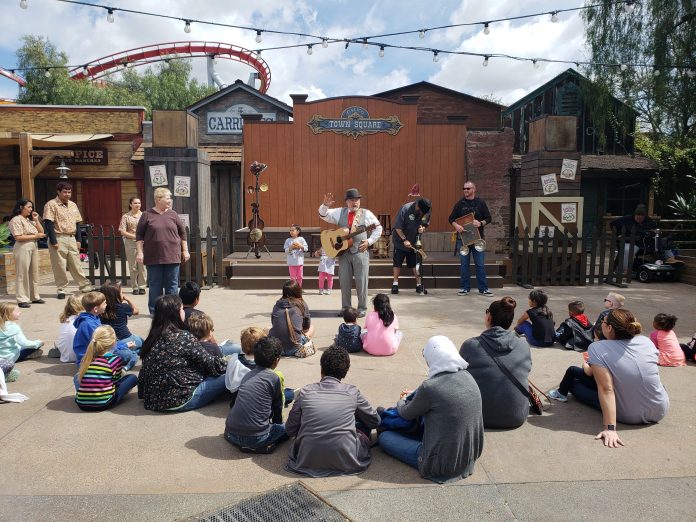 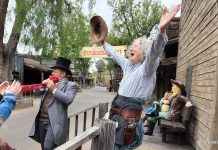