Universal Studios Hollywood has announced the full scare zone line-up that will be featured at this year’s Halloween Horror Nights. Joining the previously-announced “Christmas in Hell” zone will be 4 additional zones throughout the park, including the returning “ToXXXic Tunnel”. Here’s a brief description, along with some released concept art of a character, of each zone. 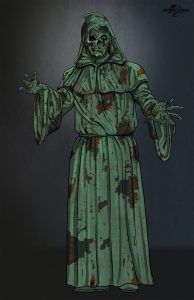 Explore crypts packed with restless ghouls and escape angry skeletons that have taken over Main Street. If you think the aged statues are creepy, wait until you encounter the wraith who will be literally watching over you. You can also spread your own demonic wings while you’re here, but be sure not to antagonize the Angel of Death.

Spirits & Demons of the East 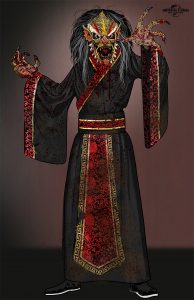 Sacred antiquities have just been shipped over from the Far East, and they didn’t come alone. Many of these artifacts were stolen from ancient temples and carry angry spirits with them. Now the spirits roam New York Street, looking to exact vengeance on anyone who would dare steal such sacred relics. Be careful out there, these powerful demons can look like anything – even innocent school children. 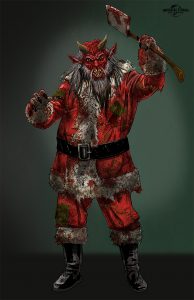 You’ll likely feel a faint sense of relief as you exit the Holidayz in Hell maze, but it won’t last long. Navigate through the Christmas trees littering French Street and make your way through our twisted takes on many holiday traditions. A giant nutcracker may be looking for a skull or two to clamp down on. The Winter Witch and Jack Frost himself will be celebrating as well, and they may not take too kindly to you interrupting their festivities. And just when you think it’s over, beware of the New Year’s Baby. He’s… cranky.

To experience the mazes on the Metro Lots, guests will have to get through the tunnel once again. This time, the warped and cartoonish members of a demonic custom car club have taken over, and they don’t plan on letting you get very far on foot. 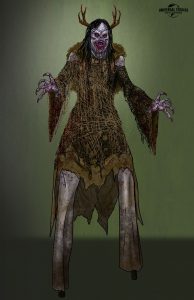 Halloween isn’t the only holiday that happens this time of year. The Celtic festival of Hop-tu-Naa is celebrated on October 31st as well. There’s also All Saints’ Day, followed by All Souls’ Day, and of course Mexico’s Dia de Muertos; all of which share this season with the centuries-old Gaelic festival of Samhain. Samhain celebrates our transition into the “darker” months at the end of the harvest season. The souls of the dead are thought to return home on this night, and are welcomed with costumes and bonfires. Some say the costumes were actually intended to protect oneself from these otherworldly beings.

As far as locations, the entry scare zone will be Fallen Angelz, with the New York street area featuring Spirits and Demons of the East. French Street features Christmas in Hell, located at the exit of Holidayz in Hell maze. The tunnel on the walk to the Metro sets is ToXXXic Tunnel once again, and the metro set area is All Hallow’s Evil. There also will be some sort of roaming scare zone, but no details have been given as of yet.