Has it really been a decade since the Queen Mary first started their Halloween event in 2009? Man, the time has flown by. We personally began visiting a few years after that, and it’s been interesting to see how the event has changed over the years, and what has stayed the same. 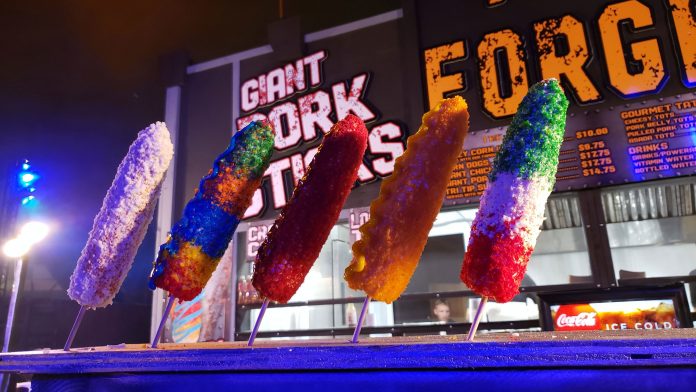 The food offered has really broadened. I remember years ago where it was just regular carnival food with a spooky name. And now we have these colorful elotes that are really eye-catching.

Much like Knott’s, Dark Harbor leans into its own history for the base story of the event, and instead of a complete refresh of mazes every year, choose instead to create one, or two at most, and fine tune the rest. Each maze brings with it an iconic character that becomes a part of the culture of the event, roaming around the grounds for scares and photo-ops. 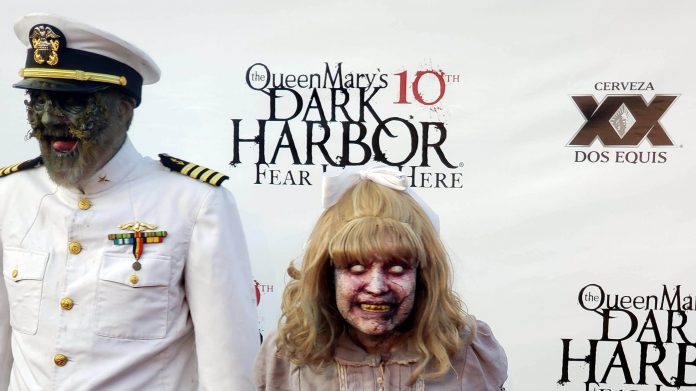 It would be weird to imagine Dark Harbor without Scary Mary or The Captain. These people are the lifeblood of what makes Dark Harbor unique. So, while The Captain’s old maze of Deadrise was retired, it’s successor, Rogue, is similarly themed and still allows him an “anchor” into the event.

Rogue just doesn’t seem to get the same rush that Deadrise used to. Whereas Deadrise was populated with the eager, but sinister shipmates, Rogue seems to be just a bunch of people yelling at you to get off the ship because it’s flipping over. Additionally, the ending seems to have had some idea with bubbles at the end, it usually just ended in a weird pile of foam at the end with no meaning. The digital projections used throughout the enclosure and for the captain’s quarters are a nice touch, but without the classic ambush ending of Deadrise, it feels like we’re missing a tradition of Dark Harbor. 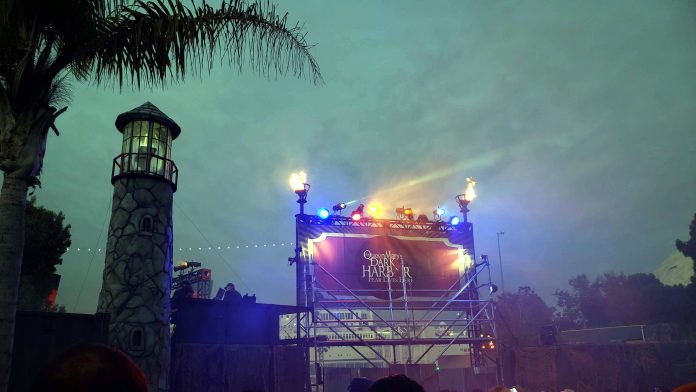 But I’m optimistic. Intrepid was originally a radically different maze from what it is now, and this year it continues to be one of the strongest ones. The actors in that maze really help sell the atmosphere, alongside the super-detailed path and great scenes. It’s funny how little someone in a plague doctor mask has to do to be scary. 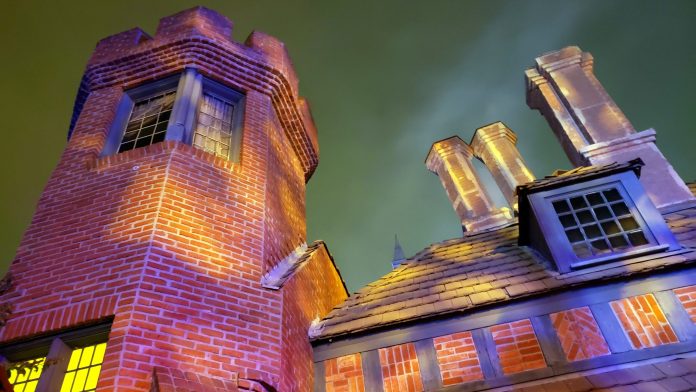 Lullaby was also really well done this year. While there’s no actual pool you can go through, they did a fantastic job of making the pool scene, especially getting the floating body effect in there. There’s also something I can only describe as a “Scooby Doo Running Door” effect earlier on and it’s perfect. Just perfect. There’s some new dolls in the maze that are terrifying. Some of them have human actors inside and some don’t, so you never know if one is going after you. 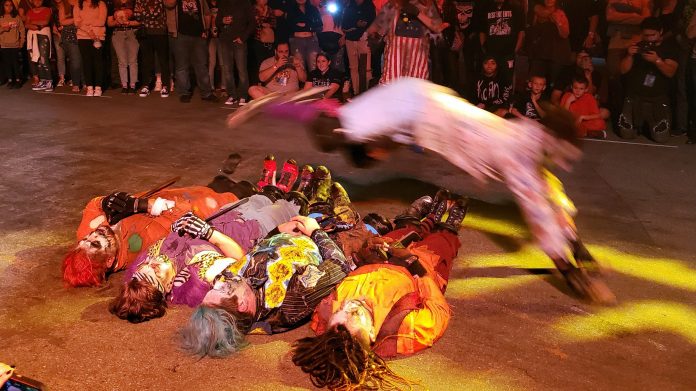 Feast was interesting this year. Once it merged and took over what used to be Soulmate, it found a good story, but the new ending this year is scary in a different form. After the final scene, where the family is all dead at the dinner table, you walk for what seems like a few minutes down some corridors and end up in the engine room where there’s a bar. Last year you needed a token to enter here, but this year to enter you simply need to survive Feast. It’s a nice walk through the ship, but many guests were confused, especially as there was no talent along the way to confirm they were walking the correct path. So yes, you’re going the right way. Enjoy the walk. 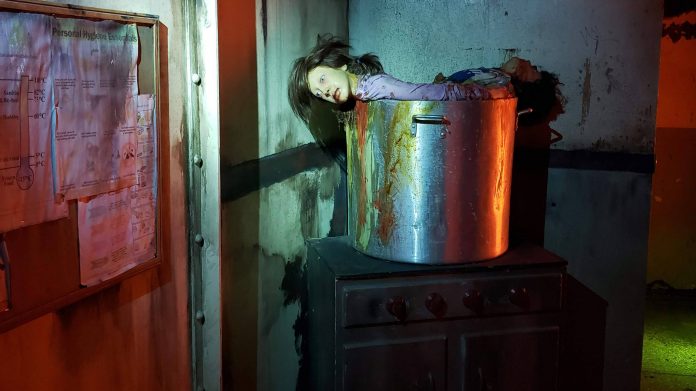 Circus is a fan favorite that sticks around, for good reason. All the core parts are in this year including the ball pit, spinning room and the hall of mirrors. The best tip is to go earlier in the night for the best ball pit experience, as they get kicked around as the night goes on. The talent in this maze is some of the best, too. They have a lot of freedom to be off-the-wall wacky, and they sure make use of it. 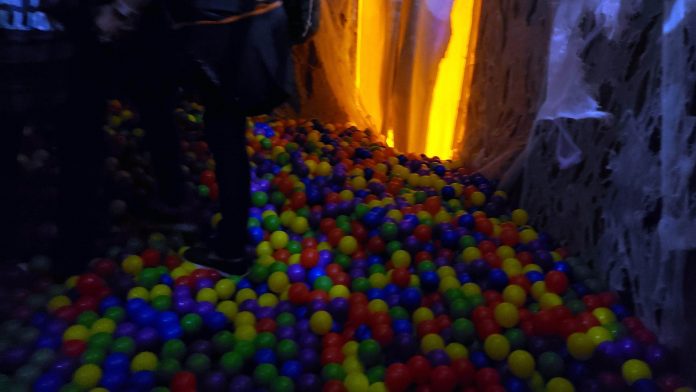 And finally, there’s B340. I’m not sure if there’s much changed in the maze this year, but I think its time has come. It still commands a long wait, as do many of the mazes, and it has the most distinctive soundtrack and my favorite detective-style outfits for the cast, but I think they’ve pushed that story as far as it could go. 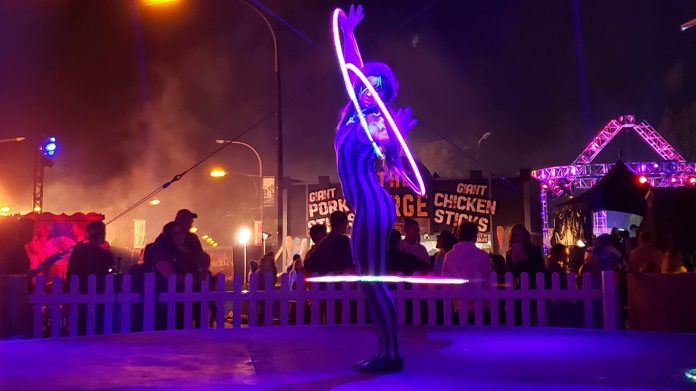 Outside of the half-dozen mazes, there’s still plenty to do and that’s why I love Dark Harbor. It’s not just the mazes, it’s an entire event. There are still two large main stages for the vaudeville acts, but instead of a small stage, some people that would normally occupy that are just roaming, providing for some unique surprises. 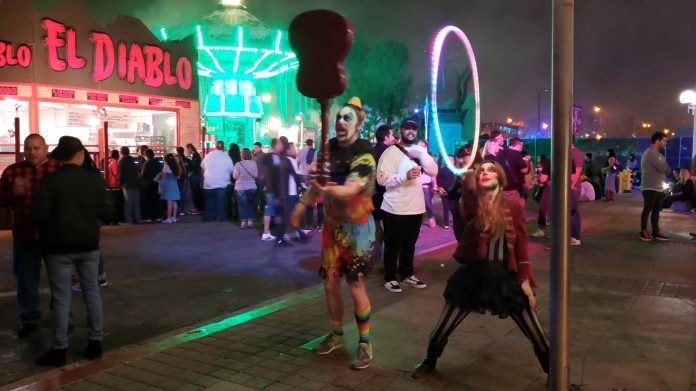 And I want to reiterate, these acts are what I love about Dark Harbor. It’s a respite from the scary mazes. There’s so much variety and talent. Fire dancers, aerialists, magicians, mimes, hula hoop dancers, singers and even puppeteers with marionettes. It’s a certain Halloween magic that allows someone that plays 1930s tunes on a banjo to put on some scary makeup, and suddenly it’s a perfect fit for Dark Harbor. My only wish was for the return of that small stage near the Circus secret bar. The rapid-fire sequencing of musicians that performed there last year was a real treat and I was hoping to find it again. Thankfully we heard a few of our favorites belting out a few tunes, like the one who only went by the name “Mama,” but without a schedule on the map, they were hard to track down. 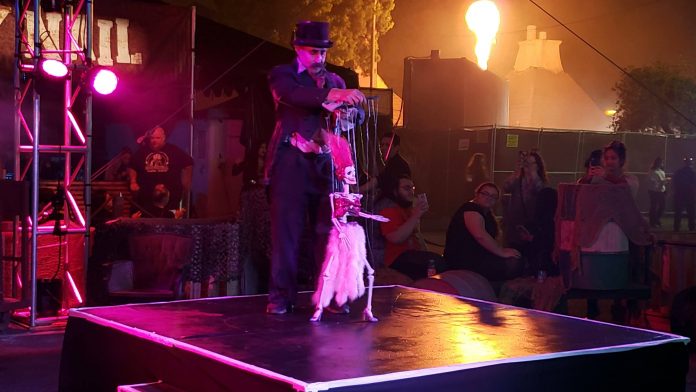 The Slider show is all-new this year, with a great new cast of characters joining the established team. I’m pretty sure I say it every year, but I can’t get over how much the art of sliding has evolved since this event first began. It’s not just sliding and jumping, but there’s choreography and a storyline with a plot and conflict. I point this out so we don’t end up taking it for granted, and appreciate the culture that is developing all around us. The Queen Mary Sliders are at the top of their game and a must-see every night with their two shows nightly at 9 and 11 PM. 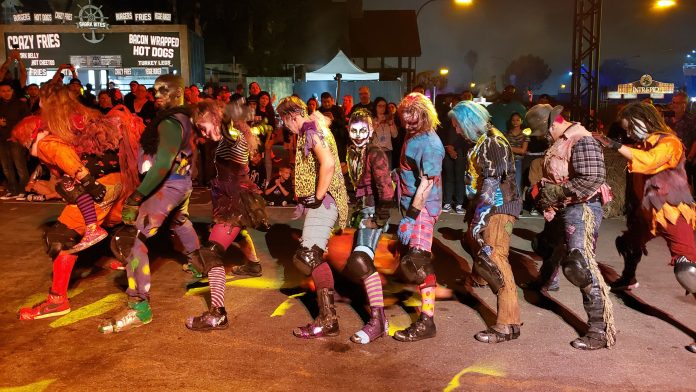 And that doesn’t touch on the swings, the 4D show in the theater, the RIP Lounge with the all-you-can-eat taco bar, the cabanas, the DJ at the entrance and whatever else I’m forgetting.

I had a blast this year, and I hope I will for many more years to come.

Queen Mary’s Dark Harbor runs select nights through November 2nd and tickets are on sale now at QueenMary.com. Keep an eye on their Facebook and Instagram pages for frequent coupon codes, too. 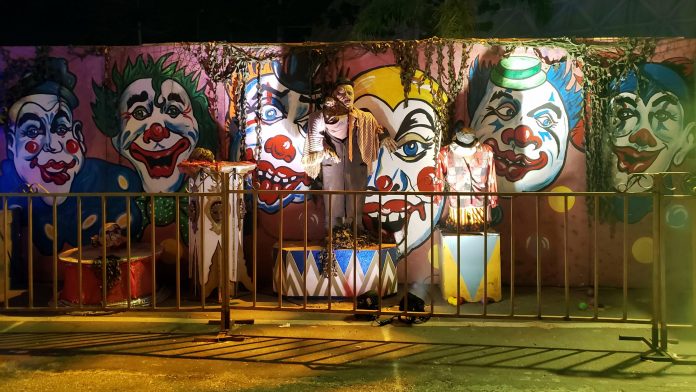 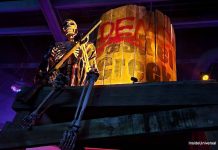