Universal Orlando has announced that Jurassic World VelociCoaster will be officially opening on June 10, 2021!

According to the Universal press release, once inside the queue, guests are greeted by Dr. Wu as they learn about the cutting-edge new coaster, which Jurassic World is touting as its newest “carnivore expansion.”

“Along the way, they’ll hear the screams of fellow riders as they rapidly roar by with Blue, Delta, Charlie and Echo right on their heels – and even come face-to-face with a few hungry Velociraptors who are anxiously awaiting being released from their stables. As the adrenaline builds and guests approach the load platform, they will hear a few reassuring words from Claire Dearing – and one final warning from Owen Grady.”

The coaster will catapult guests up to 70 mph and more than 150 feet in the air. The vehicle was designed for speed and engineered “for the hunt”, the coaster’s revolutionary ride vehicle will send riders twisting and soaring across 4,700 feet of track as they encounter near-misses, launches, 12 heart-pounding seconds of airtime, and more – with just a lap bar restraint holding them in place. 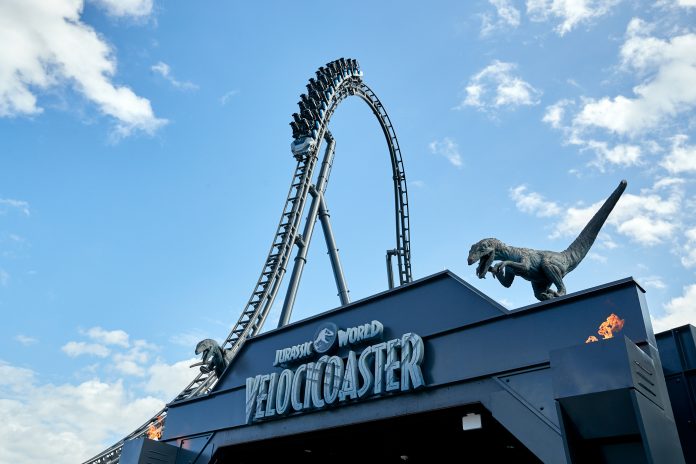