Contest entries will be accepted from June 27 through August 1, 2011. Prospective filmmakers can submit short films from 90 seconds to three minutes in length on DVD (two copies of each film must be submitted). Films will be judged based on storytelling skill, originality and scare factor. The top 10 horror shorts, as determined by the panel, will be posted online at HalloweenHorrorNights.com from August 22 to September 9, 2011 for public voting. The winning film will be announced on September 12, 2011.

Eyegore Award recipient and horror filmmaker, Eli Roth said: “As a producer I’m always looking for new talent, and happy to help a first time director get their big break. New blood, so to speak, is vital for the continuation and growth of our beloved genre, and programs like this one can help deserving people get noticed. I am excited to see the competing films, and whoever makes me lose the most sleep will win.”

Returning film contest judge, Marc Graser, Daily Variety, said: “As a studio known for bringing the horror film genre to life, it’s a thrill to help Universal Studios identify the next generation of filmmakers that will scare audiences. I can’t wait to see who steps forward with their creepy visions this year.” 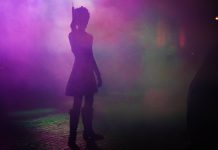