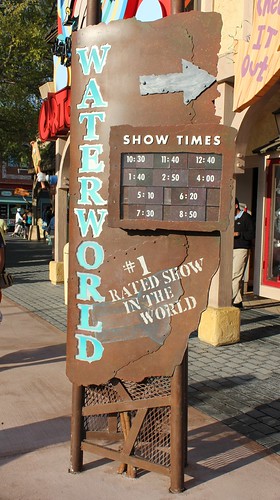 January 4, 2014 – Inside Universal has learned that Water Ski Shows Inc, the company that operates Waterworld at Universal Studios Hollywood, will no longer be in charge of the show starting this February. There will instead be a new company – Action Horizons – taking over the contracts and operation of the show at the start of the next month. Staff members from Water Ski Shows Inc were let go on January 31.

The show is not closing. This is simply a change of management for the show. There has been no change in the number of performances or anything of that nature at this time, though the new company has had experience operating WaterWorld at Universal Studios Singapore which has a few variations from its Hollywood counterpart.

Waterworld is touted as the #1 Stunt Show in America, and has been running daily performances for over 18 years since opening on October 21, 1995.

The show is expected to be closing for an annual refurbishment sometime in the next two months to prepare for the busy Spring and Summer Break peak periods. We expect to know more by that time.

Be sure to keep checking back with us for more up-to-date news on all things Universal Studios Hollywood.