August 11, 2014 – Southern California is in a unique position when it comes to the season of Halloween, so it only made sense that an annual convention celebrating all aspects of spooky culture would spring up in downtown Los Angeles. 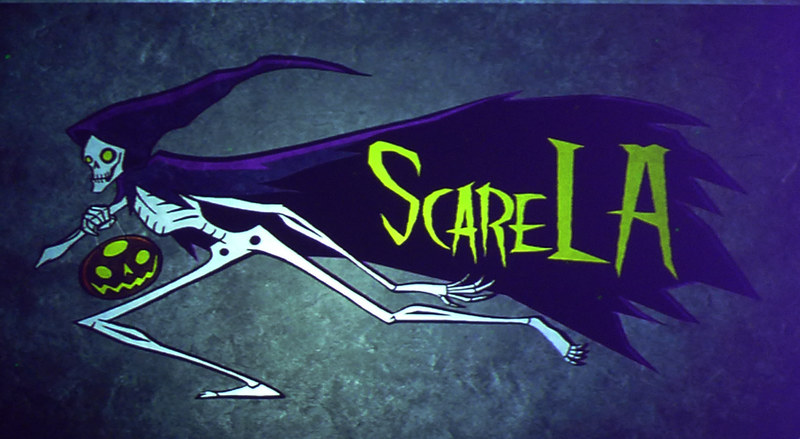 ScareLA, now in its second year, played host to a number of booths, events, panels, attractions and workshops, all under the umbrella of Halloween. Naturally, Universal Studios Hollywood’s Halloween Horror Nights had a presentation there to reveal what is assumed to be the final maze. John Murdy and Chris Williams were on hand.

They hyped up the event by underscoring the presence of a special guest. The guests, anxious to get a seat, filled the room almost immediately. Needless to say, people were excited to see what Murdy and Williams had to show and discuss.

Preceding their arrival, the hosts of ScareLA came out, thanked us for attending and then began to introduce the team the crowd was all anxious to see.

Landis revealed himself to great applause, and the panel was revealed to be completely focused around this specific maze.

Shortly before showtime people began to put a number of rumors and sightings together and it was revealed that their special guest was, in fact, John Landis, writer and director of the Halloween Horror Nights maze inspired by American Werewolf in London.

He began by describing his history in making the film, how he put the script together during a trip to Yugoslavia, based on his encounter with gypsies. He was shocked at how much it played out like a real movie, with bodies just left alone, covered in sheets.

He spent the next decade unsuccessfully trying to pitch the film, constantly rejected because either studios thought it was too funny to be a horror film or too scary to be a comedy. Meanwhile, he had been cultivating a friendship with world renowned makeup artist, Rick Baker, due their collaboration on Landis’ first film, Schlock.

The most famous scene of the movie, the transformation into the werewolf, was the next topic of discussion. The months and months of set and prop design and hours upon hours of makeup all went in to shoot a scene only a few seconds long. Rick Baker was initially in shock, and Landis, being very straightforward, asked if there was anything else that Baker’s transforming skulls could do. Replying with a negative, then Landis proceeded to wrap up that scene.

After that was all covered, Murdy began to discuss the implementation of the movie as a maze in the park. He explained it was best when they could directly collaborate with the original creators, and Landis responded in kind. Landis had nothing but praise for the team and was even in shock at how faithful some of the scenes had been recreated in the mazes.

Hollywood’s sister park in Orlando was brought up a fair amount as well, being that Universal Orlando played host to the movie last year. Landis mentioned how certain plans had to be thrown out simply based on getting as many people through the attraction as possible. While Hollywood aims for 2,000 people an hour, Orlando expects twice that. 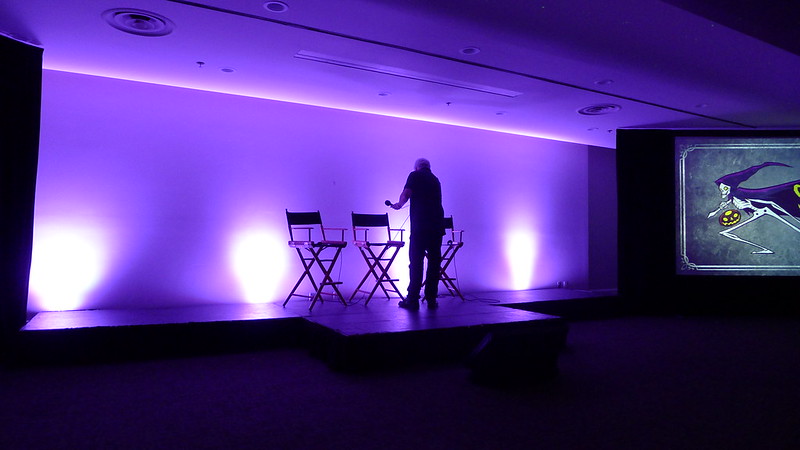 Landis also mentioned that he admired how Universal Studios Hollywood takes the time to apply makeup and prosthetics to all 600+ scareactors, a process that Murdy affectionately refers to as “The assembly line of gore”.

Wrapping up the Orlando talk, Murdy took the time to thank Michael Aiello for making this possible, as Murdy himself had been wanting to do a maze based on this film for well over a decade.

Of course, the movie isn’t just about one man, so the other creatures in the film were revealed. The Demon Soldiers were teased, showing off their unpainted masks. Alongside that, at least three fully transformed werewolves will be around the maze, up to a full 8 feet long. 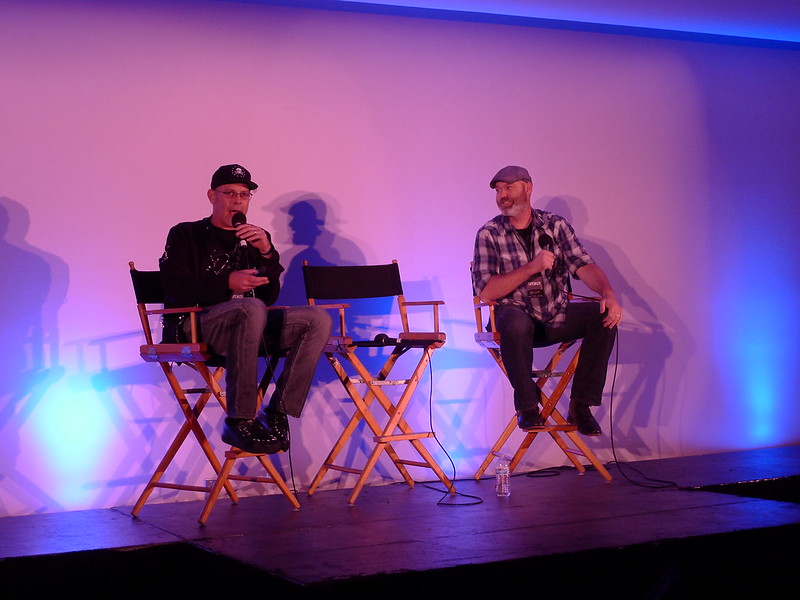 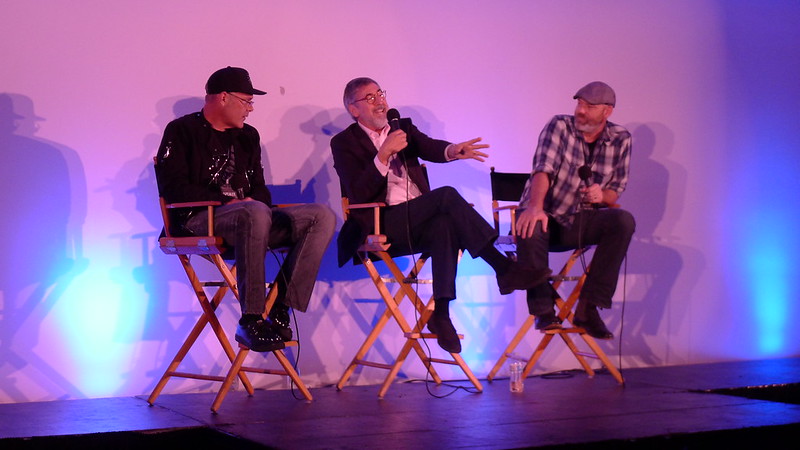 Finally, with a few minutes to spare, they opened up for questions. Murdy stressed that since it was such a special treat for Landis to be here, that he’d prefer if all the questions could be about An American Werewolf in London.

Naturally the first question completely ignored that. The woman asked if there would be any shows announced. The audience reaction was a mix of laughter and cheering. This question is a touchy subject because at last year’s Halloween Horror Nights, the sole show, Bill & Ted’s Excellent Halloween Adventure, was cancelled midway through the month due to a number of reasons and many wondered if it would be returning in 2014.

While Orlando has been casting for such a return, as their show wasn’t cancelled, no such auditions have appeared over in Hollywood. Further, the show production is actually a different department at Universal entirely and out of Murdy’s jurisdiction, so he wouldn’t have been the one to create the shows.

After the noise died down, Murdy tried to dodge the question, while Landis encouraged him to spill the details saying “it’s awesome” and “you should promote it”. Murdy stammered for a bit, and eventually managed to say that while they have traditionally finished revealing everything by this time in the year, there is still one more big announcement to come. The crowd accepted that response.

The next question asked to Landis included how he incorporated what he learned from this film to help make Thriller. Landis responded that the black glove in Thriller was actually repurposed from American Werewolf and that many things were different because how dark and shadowy Thriller was meant to be.

After a few more questions covering things already mentioned earlier in the conference, the time unfortunately came to an end.

Outside of the Halloween Horror Nights presentation, ScareLA had a lot of other great events going on including demonstrations by some of the best “slider” monsters in Southern California.

All around the slide floor were long aisles of different vendors with a wide variety of creepy things for sale. Everything from demonic teddy bears to custom silhouettes to cookies paying homage to Disney’s The Haunted Mansion, celebrating its 45th anniversary this weekend.

While browsing, a handful of scareactors wandered around, blending in, waiting for the perfect moment to strike fear into attendees.

And it wouldn’t be a Halloween convention if there was not plenty of creepy props and set pieces on display.

Discussing with exhibitors who attended the previous year, they were quite pleased with the larger turnout this year and showed optimism for the future of this convention. What will be happening in 2015 can only be imagined at this point, but given the enthusiasm displayed this weekend, the convention doesn’t seem to be going away anytime soon. 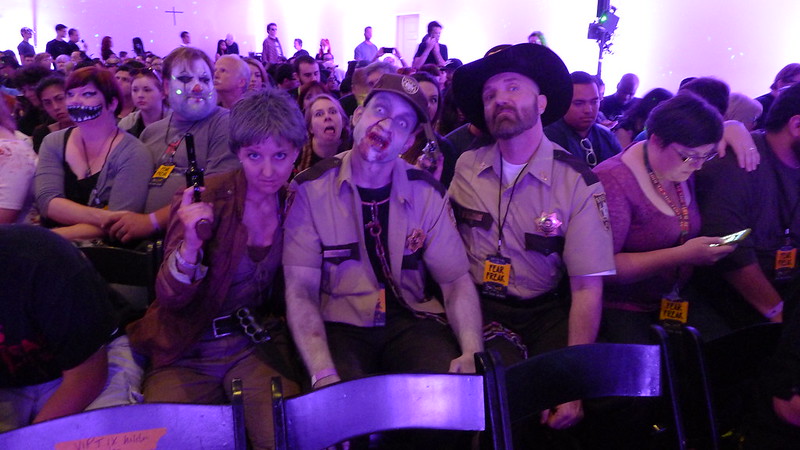 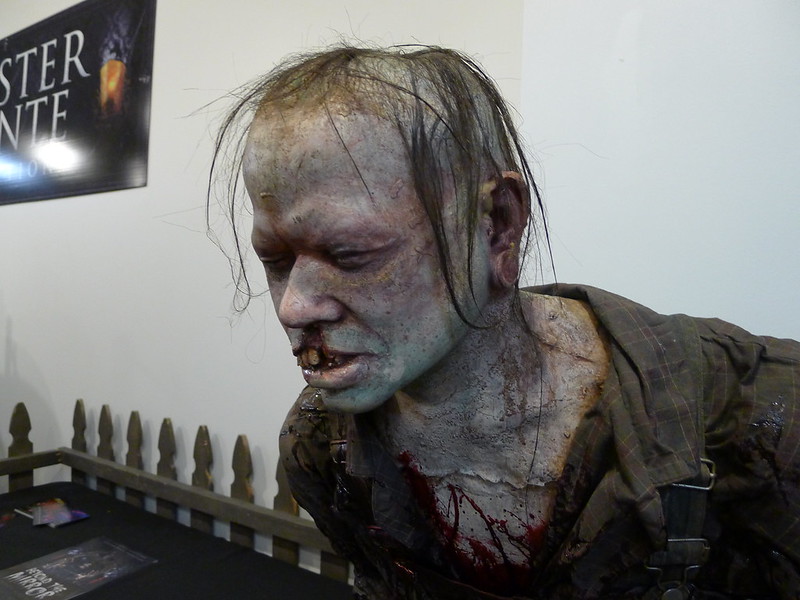 Chris Glass is an editor for Inside Universal..